The conventional power generation segment continues to be the mainstay of the power sector, accounting for over 70 per cent of the total power consumption in the country. However, the build-up of stressed assets has become a pain point for this segment. This has resulted in a low plant load factor (PLF) as well as a slowdown in coal-based capacity addition. In the past one year, the government has taken various policy measures aimed at reducing the stress in the sector, such as mandating letters of credit (LCs) by discoms to avail of power and implementing the recommendations of the High-Level Empowered Committee (HLEC), which include the grant of linkage coal for short-term power purchase agreements (PPAs), and allowing gencos to terminate PPAs in case of payment defaults by discoms.

During 2018-19, the total power generated stood at 1,371 billion units (BUs), about 5 per cent higher than that in the previous year. Of the total generation, the majority (78 per cent) was accounted for by thermal sources, 10 per cent by hydro and 9 per cent by renewables. Meanwhile, during April to July 2019, power generation (excluding renewable energy) stood at 446 BUs, marking an increase of 6 per cent over the corresponding period in the previous year.

With regard to PLF, coal-based power plants witnessed a marginal improvement from 59.72 per cent in 2017-18 to 60.91 per cent in 2018-19, on the back of an improvement in coal availability at plants and an increase in power demand. The PLF of gas-based plants in 2018-19 continued to be extremely low, at 22.9 per cent, almost the same as that in the previous year, owing to fuel shortages. 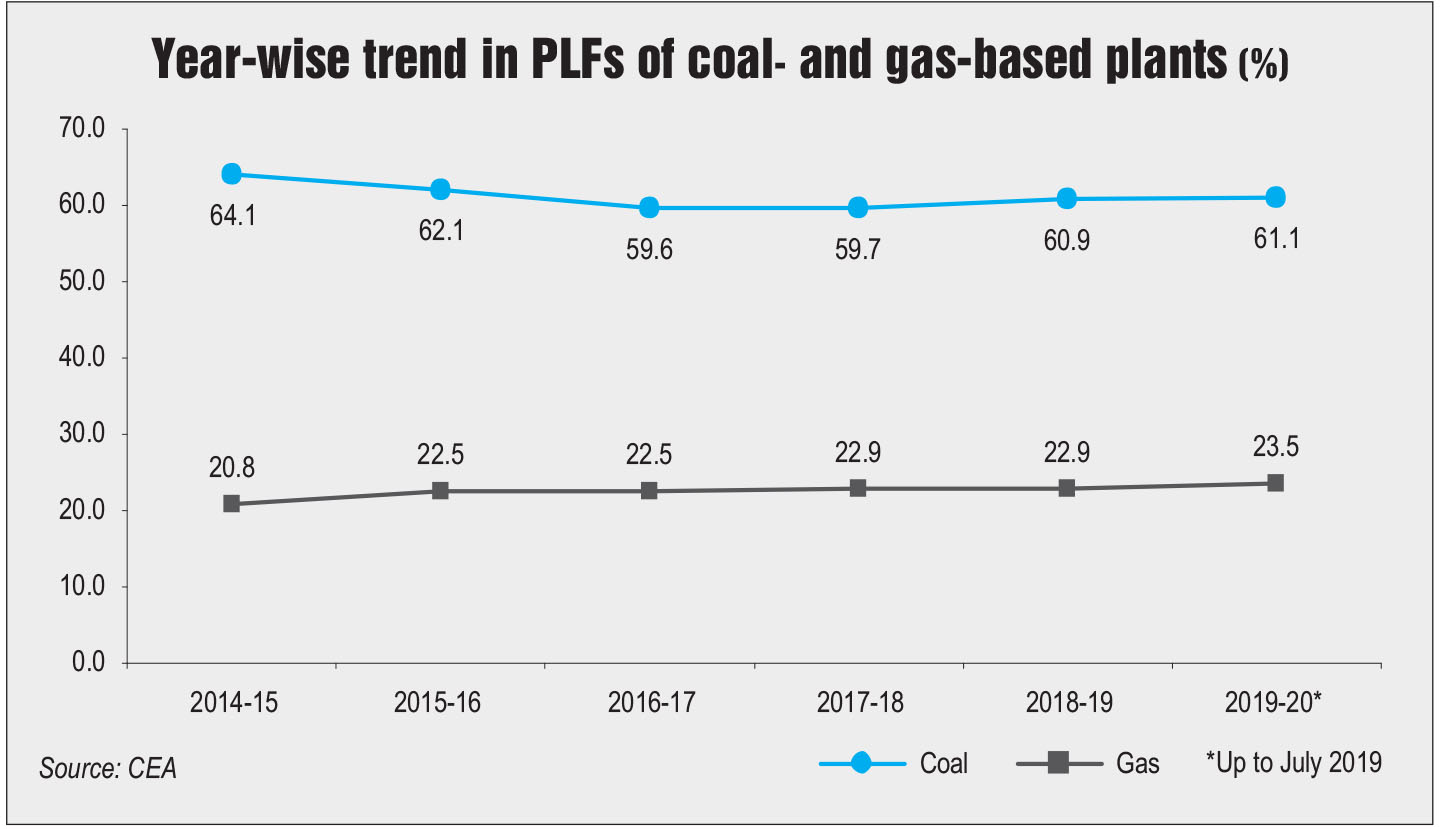 A key recent positive for the power generation segment is the implementation of the new LC mechanism from August 1, 2019. The Ministry of Power (MoP) has directed load despatch centres to despatch power only after intimation from the genco and the discom that an LC for the desired quantum of power has been opened. While state-owned power generators like NTPC had a similar payment security mechanism with the Reserve Bank of India (RBI), this has now been extended to cover private power firms.

Another key development was issuing of letters of award (LoAs) under the second phase of the pilot scheme for power procurement. In September 2019, PFC Consulting Limited issued LoAs to successful bidders for the supply of 1,000 MW of power capacity. The developers were Jindal Power Limited (315 MW), Raigarh Energy Generation Limited (295 MW), JSW Energy Limited (290 MW) and Essar Power Madhya Pradesh Limited (100 MW). The developers will supply power to three southern states at a tariff of Rs 4.41 per unit. Under Phase II, bids were received for 4,077 MW against the 2,500 MW put on offer. The LoAs for the remaining successful bidders are likely to be issued soon. NHPC Limited was the aggregator for Phase II of the scheme.

In the same month, the cabinet approved the recommendations of the HLEC regarding the resolution of stressed TPPs. In this context, the cabinet approved the grant of linkage coal for short-term PPAs as against the earlier norms granting coal linkages only to those TPPs that have medium- or long-term PPAs. In addition, generators have been allowed to terminate PPAs in case of payment defaults by gencos, and use the existing coal linkage to generate power and sell it in the short-term market. Further, the quantity of coal for the power sector in e-auctions has been increased. The MoP has also issued the methodology for non-lapsing of the shortfall in coal supplies to the power sector for three months. Further, the cabinet approved investments by gencos in four power projects worth Rs 310 billion – the 1,320 MW Buxar TPP (Bihar), the 1,320 MW Khurja TPP (Uttar Pradesh), the 624 MW Kishtwar HEP (Jammu & Kashmir) and the 500 MW Teesta Stage VI (Sikkim).

Although domestic coal production has been increasing steadily in the past one year or so, TPPs witnessed sporadic periods of coal shortages owing to weather conditions, delays in awarding contracts,  and protests, and law and order incidents. With regard to coal availability, as of September 17, 2019, the coal stock at power plants was enough to run for 15 days. Meanwhile, three power plants had supercritical coal stock (less than four days) and one plant had critical coal stock (less than one day). However, during 2018-19, the average monthly coal availability at TPPs ranged from 6 days to 19 days and the average (monthly) number of power plants with critical and supercritical coal stock ranged from one to 33 during 2018-19.

In order to augment coal availability at TPPs, the MoP has taken several steps such as introducing a “flexibility” component in the utilisation of domestic coal by gencos across its power generating stations, and awarding coal linkages under the Scheme for Harnessing and Allocating Koyla (Coal) Transparently in India (SHAKTI). In line with the HLEC’s recommendations, the power ministry has issued a draft amendment to SHAKTI, allowing the usage of linkage coal for power sale in the short-term market through the power exchanges and the DEEP (Discovery of Efficient Electricity Price) portal. Besides, the MoP has notified that certain stressed power plants would have to utilise their surplus revenue after meeting their operating expenses for servicing debt through the trust retention account (TRA), managed by the lead banker to the project. In case the developer uses coal linkage under the SHAKTI policy, the TRA must be put in place.

In another development, in order to insulate developers from the adverse impact of coal shortages, the Central Electricity Regulatory Commission, in May 2019, allowed compensation to GMR Warora Energy Limited for shortage of linkage coal under the SHAKTI scheme. This will enable independent power producers (IPPs) to recover compensation for a shortfall in domestic coal for the term of the project, easing cash flow constraints and ensuring timely recovery of the cost of alternative fuel, which was one of the major concerns for IPPs. Developers will now also be able to run their plants on imported coal if Coal India Limited is not able to meet its commitment and claim the extra costs in electricity tariffs. 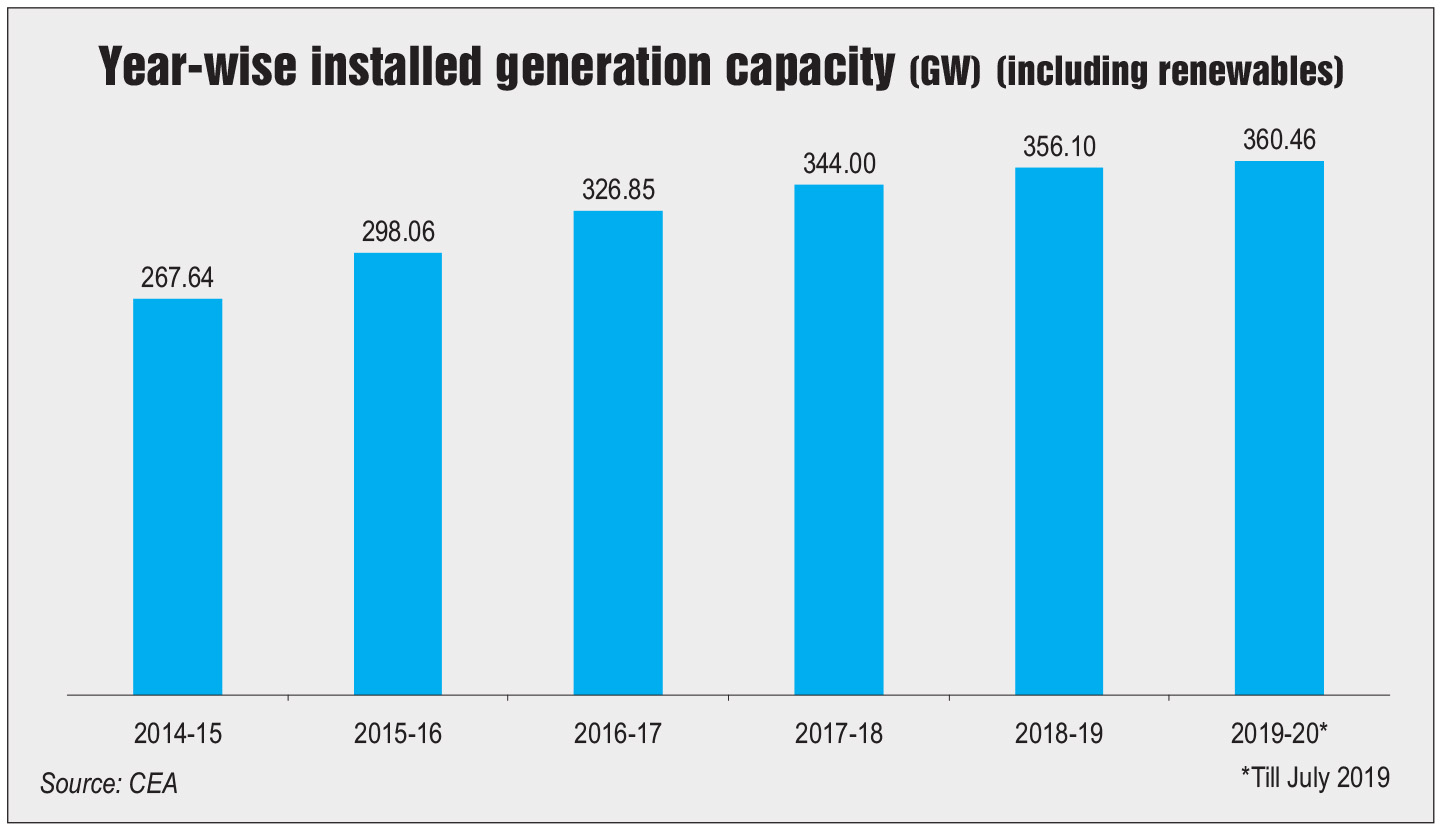 Bringing much relief to the power sector, the Supreme Court, in April 2019, set aside the RBI circular dated February 12, 2018, which mandated lenders to start resolution proceedings against a developer even if there was a one-day default in payment by the latter. This was replaced by the RBI’s “prudential framework for resolution of stressed assets by banks” released in June 2019, which allows a 30-day review period to recognise defaults. Further, the implementation period for the resolution plan has been increased from 180 days to 365 days.

Notably, early reports have begun to show some signs of easing of stress for coal-based plants, with power demand picking up and coal availability improving. Reportedly, of the 40 GW capacity from 34 coal-based power plants (entailing a debt of Rs 1.77 trillion) that had been identified under the “stressed assets” category by the government, about 16 GW is yet to be resolved, while the remaining projects are able to fully or partly meet their debt obligations.

Compliance with the Ministry of Environment, Forest and Climate Change’s emission norms still seems quite far for a large of number of plants. As of June 2019, around 1 per cent of the planned flue gas desulphurisation (FGD) systems have been commissioned. Further, a notice inviting tenders has been issued for 58 per cent of the planned FGD. Considering that retrofitting FGD requires 18 to 30 months, many plants are unlikely to meet the December 2022 deadline. With regard to nitrogen oxide, various pilot projects are under way to identify the best suited technology for Indian TPPs. Meanwhile, regarding retrofits for particulate matter, plans for electrostatic precipitator (ESP) implementation are available for 222 units aggregating 64 GW of capacity. However, nine units (1,400 MW) identified for ESP implementation are yet to submit their plans.

However, coal is expected to account for the majority share (50 per cent) in the gross energy generation, followed by solar at 23 per cent and wind at 12 per cent. Hydro, nuclear, gas and biomass are expected to account for shares of 8 per cent, 4 per cent, 2 per cent and 1 per cent respectively. The projected gross electricity generation during 2029-30 is likely to be 2,508 BUs, comprising 1,297 BUs of thermal (coal, gas and lignite), 887 BUs of renewable energy, 197 BUs of hydro, 101 BUs of nuclear and 26 BUs of biomass. The CEA study reinforces the trend of increasing replacement of thermal power by renewable power in the future. Therefore, TPPs need to take flexibility initiatives in order to complement renewable generation in the coming years.

Meanwhile, the coal-based power generation segment is facing a host of challenges. The over-building of coal-fired capacity has resulted in a decline in utilisation rates, impairing the economic competitiveness of coal-based plants compared with low-cost renewable and hydro energy sources, particularly during the monsoon season. Power plants also face fluctuations in coal supply and water shortages, which hamper their operations.

That said, the conventional power generation segment continues to be a priority area for the government and policymakers. The government has taken a slew of measures to address the challenges facing the segment such as the implementation of aggregate power procurement schemes to increase power offtake and enhance coal availability at power plants, which have begun to show results.