Transmission tower designs have evolved significantly over the years. Narrow-base, multicircuit towers are being used in place of conventional towers to ensure structural optimisation. These towers reduce right-of-way (RoW) requirements, minimise the visual impact, enable faster execution and ensure ease of installation. Besides, there have been advancements in tower foundation designs, survey techniques and installation methods.

The design of a tower depends on several factors such as voltage, number of conductors, configuration of circuits, ground profile and RoW. Transmission towers in India are designed as per the Indian Standard IS:802. This standard was first published in 1967 and then revised in 1973, 1977 and 1995. Various software solutions such as PLS-tower, i-Tower and PLS-Pole are being used by tower manufacturers for designing towers.

The voltage and number of conductors, as well as the configuration of circuits, play a key role in tower design. The choice of tower foundation depends on the soil type or ground profile of the site where the tower is to be erected. Standard foundation types are available for dry soil, wet soil, rocky soil and sandy soil. These can also be submerged. In earthquake-prone areas, seismicity data is an important consideration for laying the tower foundation. Some emerging foundation types are augur, precast, grillage and undercut. The number of transmission towers to be erected per km depends on the topography of the line route.

Further, compensation for RoW is an important factor to consider for tower design. A transmission line may pass through different areas – densely populated, agricultural, forest and hilly. As per the Ministry of Power Guidelines, 2015, compensation of 85 per cent of the land value determined by the district magistrate based on circle rate/stamp act rate of tower base area is payable. Therefore, RoW width is important in different geographical areas. 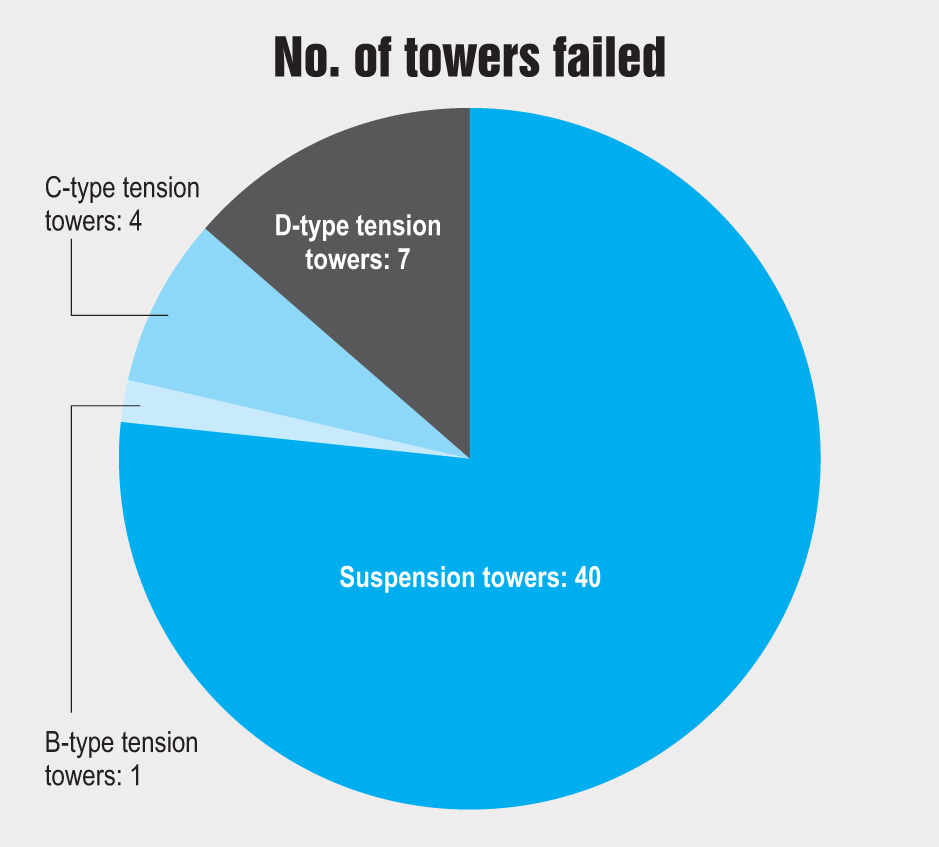 Lattice-type transmission towers are widely used by utilities as they are self-supporting, lightweight and easy to transport to inaccessible sites. Lattice guyed-V transmission towers are also cost effective. However, lattice towers require a large area and, therefore, are not preferred in densely populated urban areas or narrow corridors.

Monopoles or sleek towers with tubular sections are installed in such cases. These towers consist of polygonal tubular sections with a tubular crossarm arrangement for fixing tension and suspension clamps on it. The tubular structure can be in a single tubular form or an H-form. Monopoles require one-sixteenth of the space needed by lattice-type towers and, therefore, have less RoW requirements. They also offer the benefits of faster installation (as fewer components are required) and greater flexibility in design vis-à-vis lattice towers. Further, monopoles have a significant wind loading capacity and can withstand extreme weather conditions.

For instance, state transmission utility Madhya Pradesh Power Transmission Company Limited has utilised the existing 132 kV North Zone-Jaitpura line corridor to set up 220 kV multicircuit monopoles. This is the first time monopoles have been used for multi-voltage transmission systems in India. The upper panel of the multicircuit monopole was used for the deployment of a 220 kV (double-circuit [D/C]) line, whereas the lower panel was used to deploy a 132 kV D/C. The move helped cater to the increased load demand of Indore city.

Meanwhile, Sterlite Power has used monopoles for uprating the Mallapuram-Manjeri line from the 66 kV single-circuit (S/C) to 110 kV D/C for the Kerala State Electricity Board. The state utility was struggling with a 30-year-old network around which the town grew, leaving no scope for construction of any new line. This 66 kV S/C old line was built to cater to the need of the population as a solution was required to facilitate the increase in load and improve the quality of power. Sterlite offered its AL59 conductor solution technology, which facilitated higher ampacity to accommodate the peak load demand with reduction in line losses at normal loading conditions. It also used monopoles to install the line, thus reducing its footprint.

Other emerging tower designs include D/C and multicircuit lines for minimising RoW, delta or vertical configuration towers, insulated crossarms that help reduce the height and width of the towers, and tower designs with fewer sections and bends to reduce inventory and lead times. Further, tower designs using less steel to make transportation and assembly easy reduce the number of towers required per km. Other advanced tower types include delta configuration towers and chainette towers. The former hold electrical conductors in an equilateral triangle, and they are more compact than conventional lattice towers. Chainette towers are small structures consisting of two small masses supported by guy wires and hanging insulators. These are lightweight, low cost and involve less installation time.

Emergency restoration system (ERS) tower structures have also gained traction. These are designed to rapidly bypass permanent transmission towers at any voltage in any terrain. ERS can be erected in hours and is suitable for hand, crane and helicopter installation methods. Though designed for temporary use, utilities keep ERS towers in continuous service for over a decade owing to their robust design.

Apart from innovations in design, model-based software products are being used for providing digital architecture. Advanced 3D software provides users with the latest tools for increasing productivity and accuracy during the construction layout process, and reduce rework and lost time. It allows users to create layout points of critical field activities. The layout data can then be imported back into the building information model for verification of quality assurance (QA) and quality control (QC). To assist with QA/QC workflows, the user is able to import layout points such as as-built or staked locations and review the point properties before inserting information for comparison through AutoCAD or Revit. These features provide the user with an efficient and flexible method to create the field points required for layout on a variety of model entities.

Net, net, with the transmission network slated to grow significantly in the next few years, there will be huge demand for transmission towers that can optimise the RoW requirements.