UDAY’s term is over and the power distribution segment continues to be affected by the chronic debt problem. As per recent data shared by the Ministry of Power (as of September 2019), the cumulative book losses of discoms have shown a significant increase, from Rs 151.32 billion in 2017-18 to Rs 280.36 billion in 2018-19.

Over the years, the inability to hike tariffs, the rising cost of power, under-recoveries linked to power thefts, subsidies, and the increasing demand owing to electrification schemes have left the discoms saddled with losses.

To be sure, UDAY did have a promising start with financial losses coming down in FY2017 and FY2018 and improvements in operational performance parameters (AT&C losses, billing efficiency, etc.). However, four years on since UDAY’s launch in 2015, the states continue to lag behind in eliminating the ACS-ARR gap and bringing AT&C losses to below 15 per cent as prescribed by the UDAY agreements.

As efforts to turn around discoms falter, state government finances have been significantly impacted. The Reserve Bank of India (RBI) in a recent report on state finances has stated that the debt position of state governments has started showing incipient signs of unsustainability, particularly post-UDAY. According to the RBI, “Post the implementation of UDAY, states’ debt witnessed a significant rise in 2015-16 and 2016-17 and continued in 2017-18.” The debt is expected to reach Rs 52.58 trillion by the end of March 2020 or almost 25 per cent of GDP (see Table). 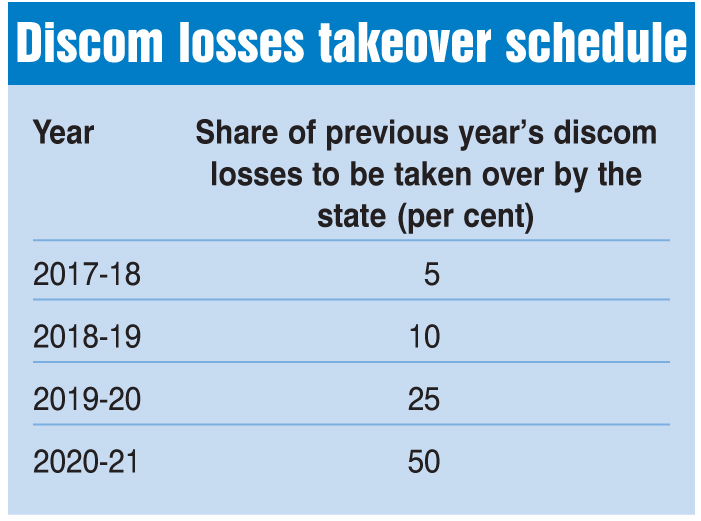 The central bank, in its annually published report on state finances, states that under UDAY, the scope of debt restructuring was larger than under earlier programmes as state governments took over 75 per cent of the outstanding liabilities of discoms in the form of grants or equity. (The earlier financial restructuring schemes were the One Time Settlement [OTS] scheme in 2003 and the Financial Restructuring Plan [FRP] in 2012.)

Under UDAY, the states that did not need debt restructuring were given the flexibility to enter into operational turnaround agreements. Overall, 16 states (including all the seven FRP states) signed comprehensive financial and operational turnaround agreements under the programme, which was funded through non-SLR (statutory liquidity ratio) UDAY bonds of Rs 2,100 billion.

The finances of these states in the bond issuance years (2015-16 and 2016-17) were significantly impacted. Also, interest payments, redemptions and discoms’ loss funding continue to impact state finances on an ongoing basis.

The RBI also notes that with the coupon rate on UDAY bonds at a premium over those on SDL (state development loan) bonds, the cost of debt servicing has gone up for the UDAY states. The impact on state finances is likely to continue much beyond the terminal year due to interest payments on UDAY bonds and redemption of these bonds. 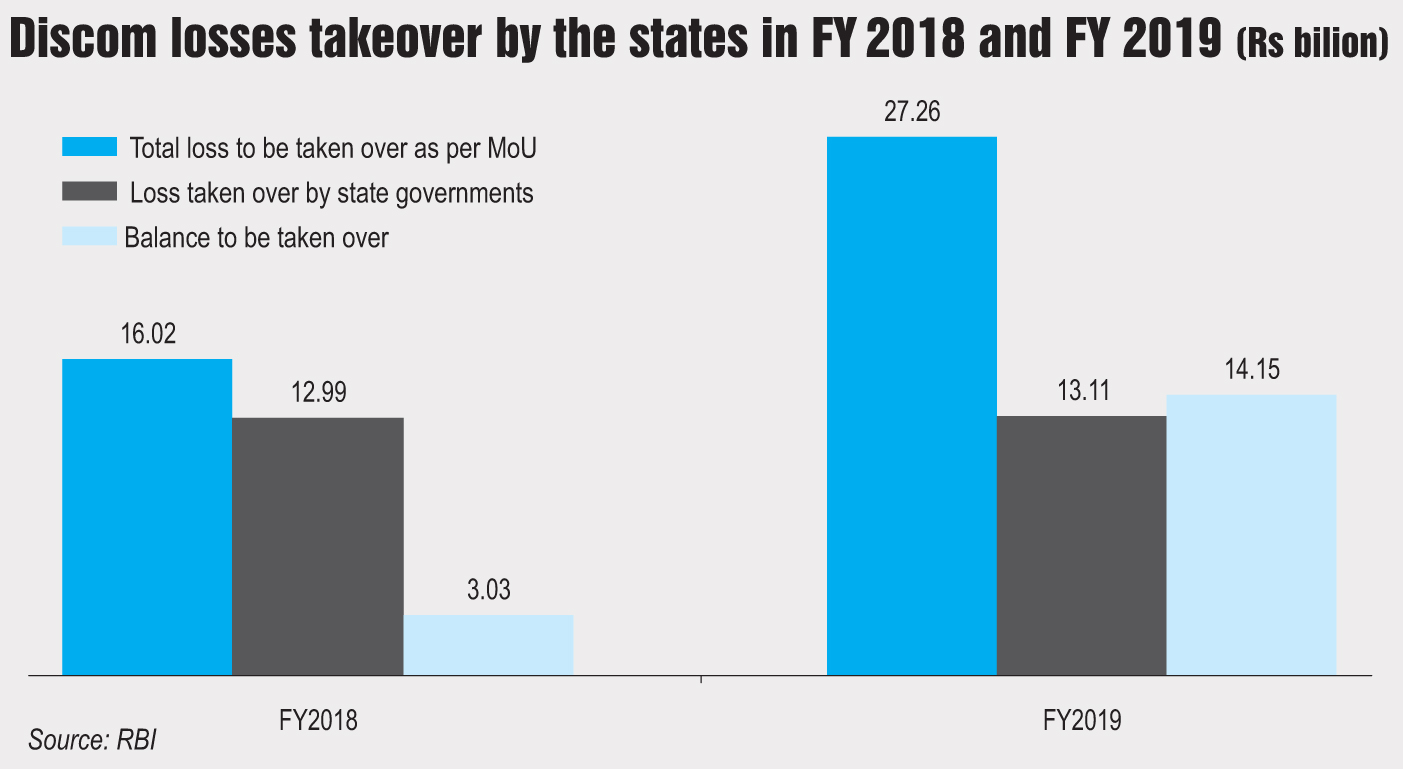 There has also been incomplete compliance with the provisions of UDAY for takeover of losses by the state governments, notes the RBI. As per the UDAY provisions, the state governments were mandated to fund a progressively greater share of future discom losses from their own finances and prevent the ballooning of losses on discom books. As per this provision, the states were supposed to provide funding of Rs 27.26 billion in 2018-19. But incomplete compliance with this provision has resulted in less than half of this amount being funded.

The RBI has cautioned that the impact of this provision on state finances could increase significantly in 2019-20 and 2020-21 due to a higher share of losses to be funded, and a reduction in revenue benefits to discoms from the conversion of state government debt into grants on account of varied debt restructuring models adopted by the state governments. Also, the reduction in revenue from grants for discoms in 2018-19 to 2020-21 could potentially increase discom losses, particularly for the states such as Uttar Pradesh, Telangana, Rajasthan, Jharkhand and Andhra Pradesh. This could entail a significant fiscal outgo with a greater share of these losses mandated to be funded by the states. 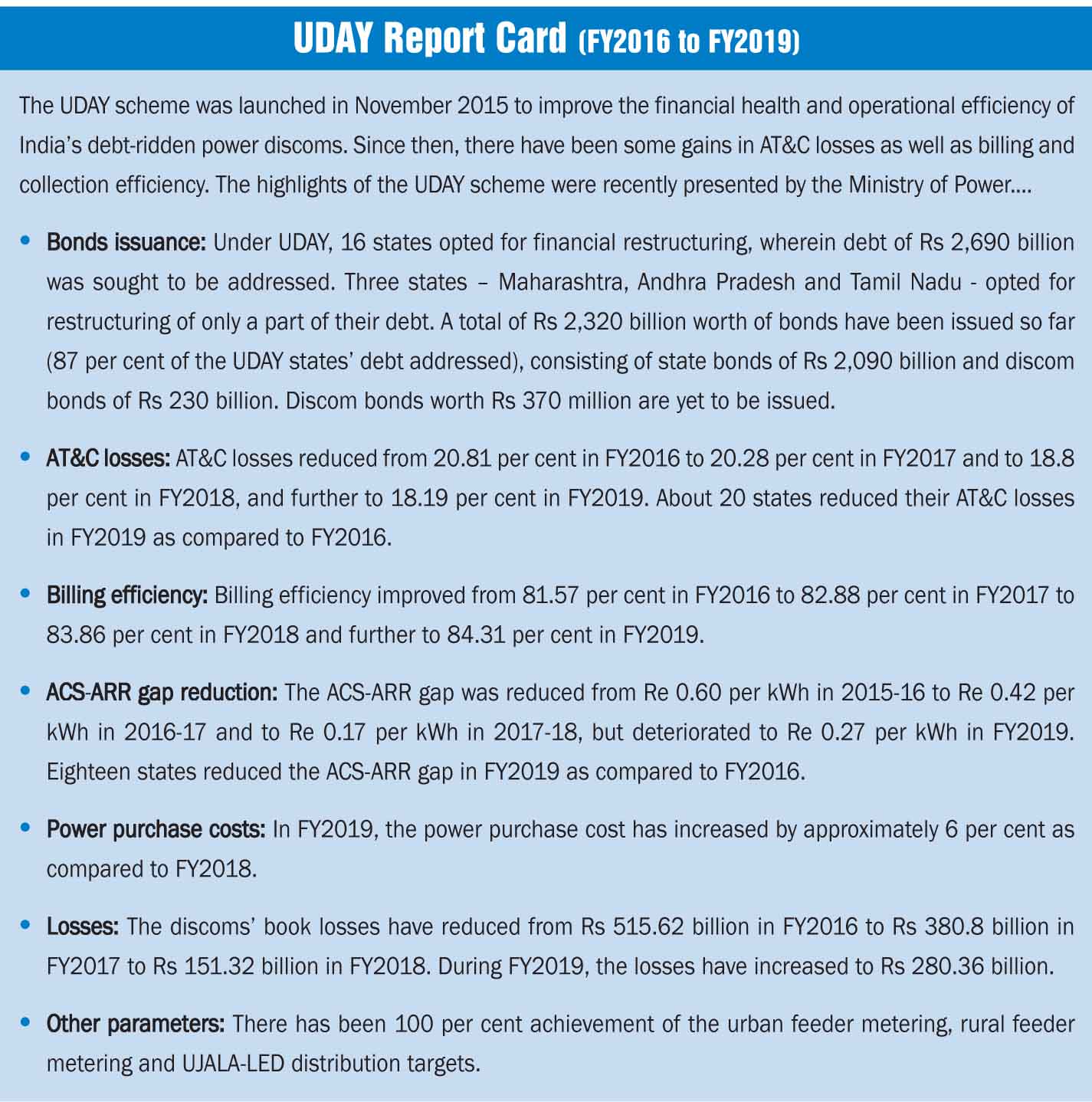 The government has acknowledged the issues of state finances and wants to fix the situation with reforms such as smart prepaid metering. “We would like the entire system to be covered by smart meters that are prepaid so that billing, losses and inefficiencies are removed from the system. The big elephant in the room is the mismatch between the cost of supply and the revenue realised from consumers. This has to be managed, failing which the power sector would become unsustainable. Various schemes and subsidies are provided by the state governments, which is a major issue for state finances. We need to work on this challenge,” stated power secretary S.C. Garg at the recent conference of power ministers held in Gujarat. Towards this, the Smart Meter National Programme, which is currently being implemented, aims to retrofit 250 million conventional meters with smart meters, which will lead to an overall 80-100 per cent improvement in billing efficiency. 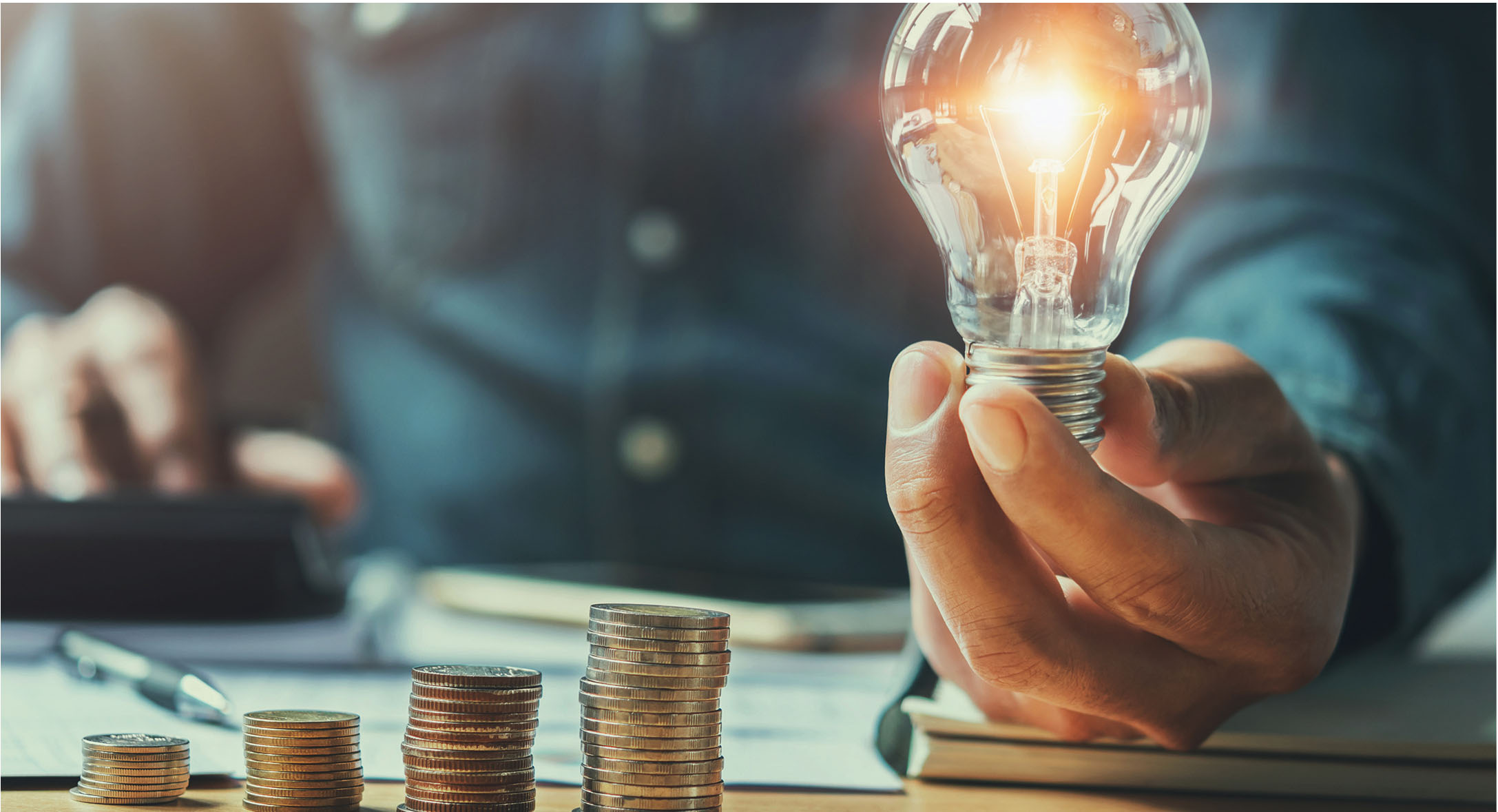 Certain corrective actions have also been implemented in the past couple of months, which are expected to improve the current state of affairs. For instance, in August this year, in an attempt to tackle the payment crisis, the government made it mandatory for the state discoms to offer LCs as a payment security mechanism in PPAs to ensure timely payments by the states to generation utilities. Recently, the Appellate Tribunal for Electricity passed an order asking the state regulators to report delays in tariff revisions as these affect the viability of the distribution segment.

Going forward, while there has been no formal announcement yet on the second phase of the UDAY scheme, it is expected that the next phase would be more target driven. Meanwhile, tariff policy reforms are also on the cards that would encourage competition, introduce content-carriage separation and franchises, which, if implemented, should improve the overall health of the discoms.

To conclude, financial losses not only have a bearing on the power sector’s viability but have also led to fiscal challenges for the states. As the apex financial regulator has rightly stated, it is incumbent upon the states to take the necessary steps for a turnaround of the discoms and elimination of the revenue gap in a time-bound manner.