The most critical responsibility of power system operators is to maintain grid reliability through load generation balance. For a large complex network such as India’s, primary, secondary and tertiary frequency controls are essential tools for load despatchers to ensure reliability. Primary and tertiary controls are currently in place partly through various mechanisms. Secondary control is proposed to be implemented through automatic generation control (AGC), which was first mooted in 2015. Based on the experience of five AGC pilots (aggregating 5 GW) implemented by the National Load Despatch Centre (NLDC) over the past couple of years across regions, the Central Electricity Regulatory Commission (CERC) has given its go-ahead for large-scale implementation of AGC across the interstate generating stations (ISGSs) regulated by it.

This has been facilitated by the CERC’s latest order, notified in August 2019, directing the NLDC to monitor the installation of the requisite equipment in all thermal and hydro ISGSs (meeting specified criteria) within six months and to operate the AGC system at the earliest.

Consequently, in September 17, 2019, the NLDC notified the requirements for AGC connecting equipment at power plants along with a list of plants identified for monitoring by the NLDC as per the CERC order. It has identified 78 power stations, thermal and hydro, with an aggregate capacity of 71,484 MW, which will be covered under AGC. The notification includes minimum requirements for AGC connecting equipment based on the AGC pilot experience.

The NLDC has commenced consultations with generators for AGC implementation. The first meeting was held on October 3, 2019 with participation from ISGS generators such as NTPC Limited, NHPC Limited, NLC India Limited, Coastal Gujarat Power Limited, THDC India Limited, the Bhakra Beas Management Board, North Eastern Electric Power Corporation Limited, Sasan, SJVN Limited and Maithon Power Limited. Various implementation issues were discussed and clarified at the meeting. The NLDC held a meeting with central transmission utility (CTU), Power Grid Corporation of India Limited (Powergrid) regarding the provision of wideband communication nodes via fibre optic cable to power plants, which is essential for them to become AGC enabled.

Following the CERC’s October 2015 order on the roadmap for operationalising spinning reserves, NLDC submitted an outline procedure in December 2015 and proposed to conduct the first AGC pilot at NTPC’s Dadri Stage II station. Under the pilot, the requisite equipment was installed at the station and a mock exercise was successfully conducted in June 2017. Following this, in July 2017, the NLDC published a detailed modus operandi on the operationalisation of spinning reserves for the implementation of AGC – recommending its execution in two phases. In Phase I, all ISGSs regulated by the CERC will be covered, followed by the other ISGS which will be covered in Phase II.

It is observed that there is a one-time expense involved for generators to install the requisite AGC software and firmware. The cost of the pilot projects commissioned so far ranges from Rs 3 million to Rs 5 million per generating station.

At its end, the NLDC is upgrading its supervisory control and data acquisition/energy management system and migrating to a new server from the pilot server. This process would take about three to four months. Once completed, the efficacy of the upgraded system will be tested with respect to five operational AGC pilots at NTPC stations initially. 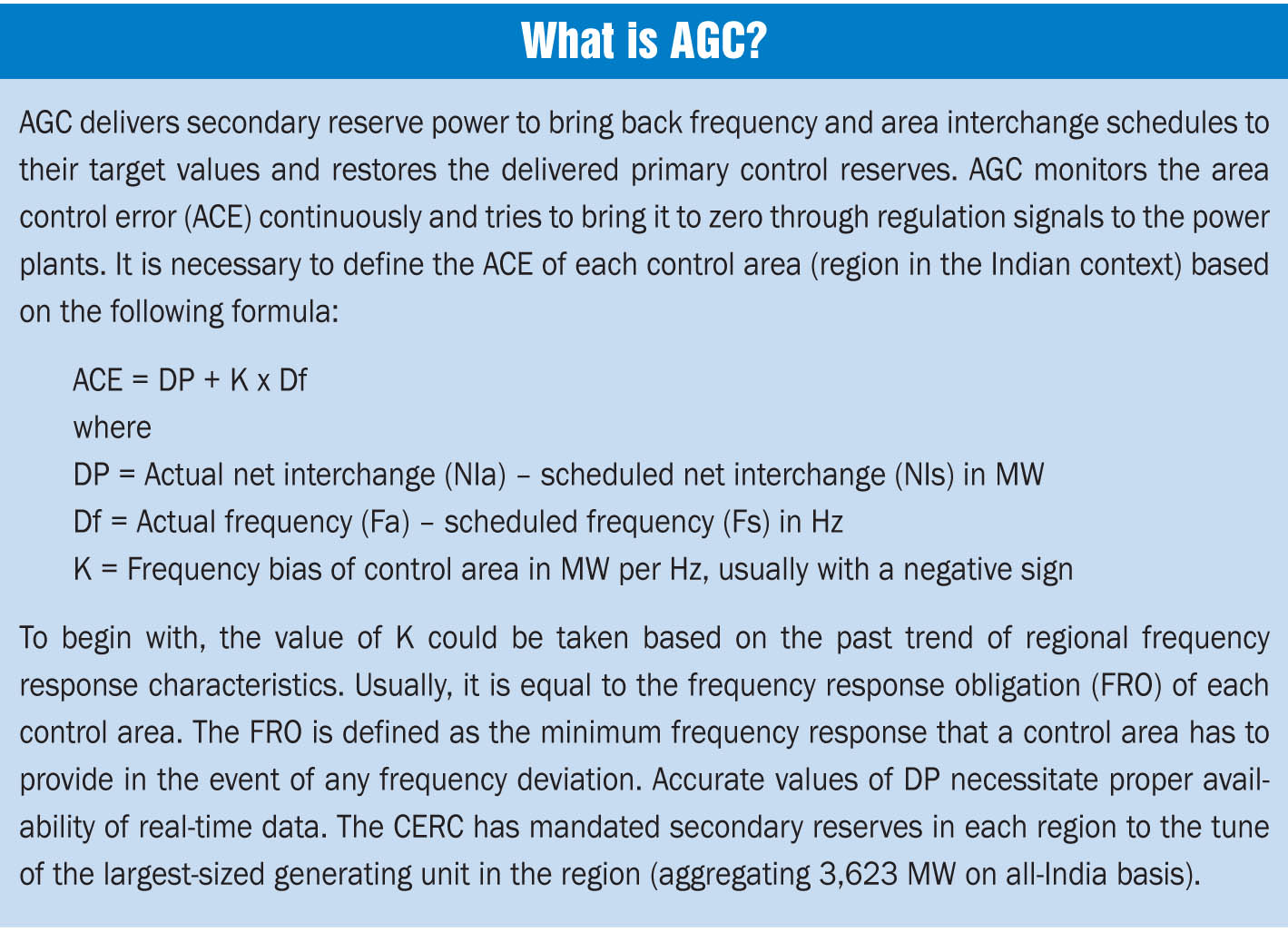 In its order (No. 319/RC/2018), the CERC has directed all thermal ISGSs of 200 MW and above capacity as well as all hydro stations of over 25 MW capacity (excluding run-of-the-river projects) regulated by the CERC to necessarily have the capability to provide AGC support. This implies that these stations must install the required software and firmware for AGC implementation at the unit control rooms for transferring the required set of data for AGC as notified by the NLDC.

The expenditure incurred to make the stations AGC enabled, which it considers as not significant, may be claimed by generators as per the provisions of the power purchase agreements or relevant regulations.

The NLDC is entrusted with monitoring the implementation and ensuring that ISGSs are AGC enabled within six months (by February 2020).

The framework for the compensation and deviation charges approved in The CERC’s December 2017 order would apply to five pilot projects and other ISGSs once they are AGC enabled. As per the order, an incentive or mark-up equal to 50 paise per kWh would be paid to generators for both up and down service (that is, positive AGC MWh generation and negative AGC MWh reduction). In addition, AGC signals would be factored in (subtracted from the actual generation along with the scheduled generation) while evaluating deviations as energy produced due to AGC signals should not be considered as deviation from the schedule. Deviations would then be settled as per the existing deviation settlement mechanism (DSM) regulations.

The CERC order allows the NLDC/ RLDCs to test, tune and operate the AGC system for enabling signals to power plants at the earliest.

In its notification, the NLDC requested power plants to provide the infrastructure for meeting the specified requirements and the take necessary action for arranging communication from the existing nearest wideband communication node to the unit control room through redundant fibre optic cables in coordination with the CTU. The specific requirements include lists of the analog input data, digital input data and analog output data needed per generating unit besides hardware specification and other associated hardware/cabling requirement as well as basic logics to be implemented at the power plant RTU.

These arrangements must be made by January 31, 2020 to ensure that stations are AGC enabled by end February 2020 as required by the CERC order. This would ensure that the NLDC has adequate time to check the data of all the 78 plants and integrate them into AGC by April 1, 2020.

In a day-long meeting held at the NLDC, New Delhi, recently, the NLDC presented its experience with AGC pilots and action points for its implementation at the identified power plants. It suggested plants to opt for vendor-agnostic solutions to meet their generic requirements with respect to input and output signals for AGC. The NLDC also clarified that AGC signals honour all technical limits specified by plants, and hence, in case of a zero margin in a plant, no increment in generation will be given under AGC. However, they may be instructed for generation reduction depending on area control error.

Further, the NLDC explained that if existing digital control systems at stations (which are capable of interfacing directly with the CTU wideband communication node via fibre optic cable) can transfer and accept the desired signals needed for AGC and can perform the desired calculations, such equipment may be optimised to that extent with firewall routers and communication redundancy at the plant level. Sufficient protection with respect to cybersecurity needs to be ensured at the plant level while connecting with the NLDC AGC server as the communication is proposed on IEC-104. It also highlighted that the coordination between Powergrid and power plants as well as among various departments of the power plant is necessary for a hassle-free AGC implementation. The next meeting is tentatively scheduled for November 22, 2019. 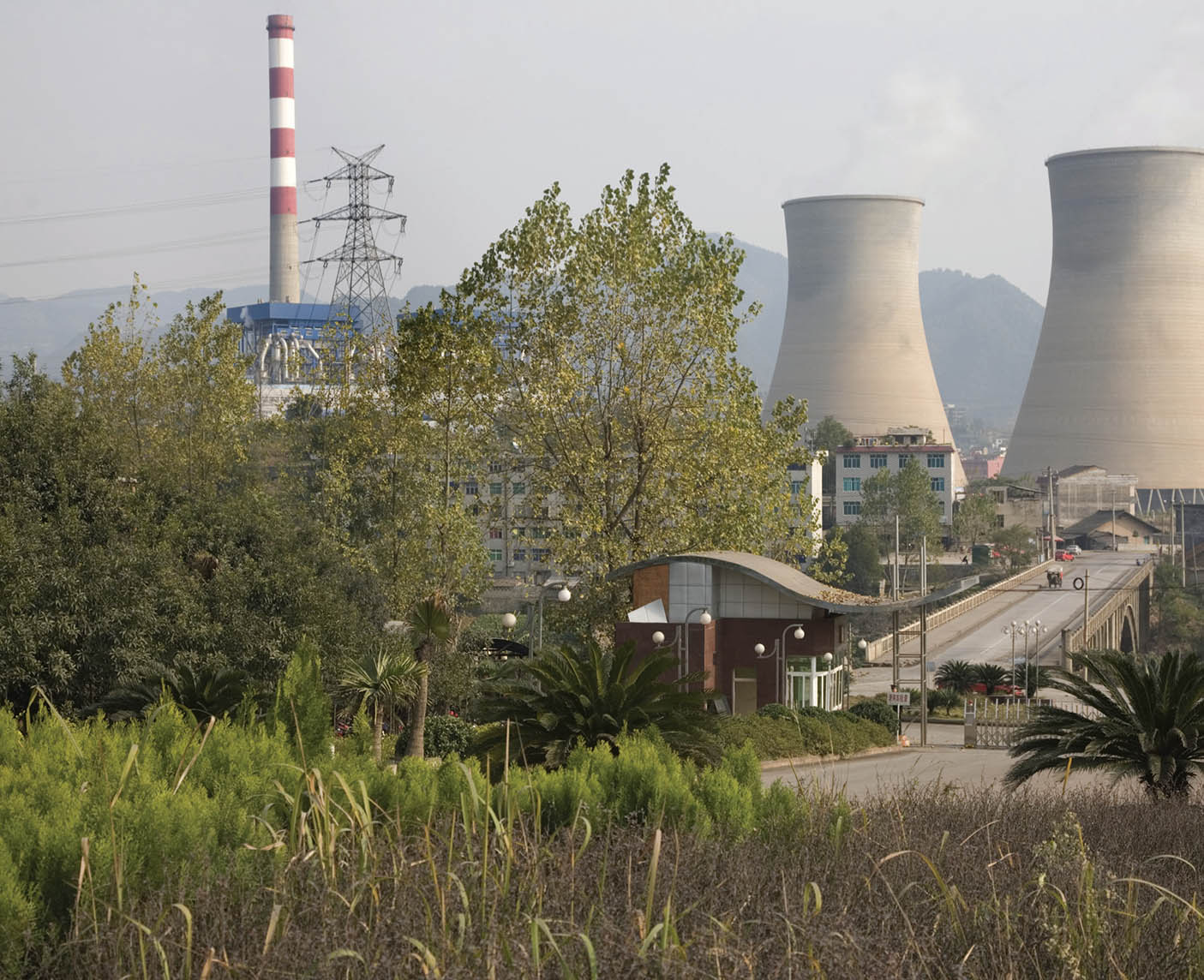 The power sector is witnessing dramatic changes in the generation mix and increased decentralised generation. Therefore, for stable frequency operation of the power system, different solutions including accurate load and renewable energy generation forecast, proper portfolio management by states, primary response from generators, secondary control in the form of AGC and ancillary service products in different time frames are needed. In this context, in its latest order, the CERC has directed its staff to initiate a comprehensive review of the ancillary services framework to allow generators to utilise their capabilities to serve various system requirements through multiple flexibility service arrangements to reduce the cost of providing individual services.

For exercising secondary control, AGC implementation on a pan-Indian basis is necessary to maintain grid reliability and adhere to the national reference frequency of 50 Hz most of the time. For effective AGC implementation, regulatory intervention is required for mandatory provision of primary response and a gradual phasing out of restricted governor mode of operation (RGMO). This is being undertaken as part of a larger exercise to review the Indian Electricity Grid Code (IEGC) by the CERC-constituted expert group, which is expected to submit its recommendations by end November 2019. The related regulatory changes are expected to be made thereafter.

AGC pilots have helped the NLDC gain significant experience and adequately equipped them to implement it on a larger scale. Over the next five to six months, the NLDC has an ambitious task of connecting over 71 GW of capacity to the AGC system from the current 5 GW (connected through pilots). Eventually, the ambit of AGC must be expanded further to other regional entity generators (which are not regulated by the CERC) in the next phase. Based on the performance of generators in terms of fast ramping and their ability to track AGC signals, differential compensation may also be considered. For now, robust foundations are being laid to operationalise secondary reserves essential for secure, reliable and efficient system operations.