Over the years, private sector participation has also increased significantly. The share of the private sector in the total line length grew from around 3.3 per cent in 2011-12 to 7.4 per cent in 2018-19. This can be attributed to the introduction of tariff-based competitive bidding in 2006. As of August 2019, 43 transmission projects (excluding cancelled and under-litigation projects) have been awarded under TBCB. Of these, 30 projects have been secured by private players while 13 projects have been awarded to Power Grid Corporation of India Limited (Powergrid).

One of the key growth drivers for transmission network expansion and strengthening is the growing renewable energy capacity. It helps evacuate power from renewable energy plants and manage the intermittent nature of renewable energy. Thus, significant transmission network expansion is being carried out under the green energy corridors project. Apart from this, in July 2019, the central government approved transmission schemes of around Rs 432 billion for renewable energy zones with a potential capacity of 66.5 GW to be achieved by 2022. Another growth driver for the transmission network, particularly at the interstate level, is the power demand-supply mismatch owing to the distributed nature of generation sources and load centres. The interregional power demand-supply gap requires augmentation of regional transmission links to transfer power from surplus to deficit pockets. Apart from this, Indian Railways is planning electrification of about 30,000 route km of broad gauge rail during 2018-19 to 2021-22. Further, transmission lines are being developed to facilitate cross-border power trading. Power trading is expected to rise in the SAARC region in the coming years, resulting in greater resource optimisation. Apart from this, the growing power demand in the country on account of government schemes such as Saubhagya and Power for All as well as wider uptake of electric mobility will require strengthening of networks, particularly sub-transmission networks operated by state utilities.

Pre-construction surveys are an essential step in the development of transmission projects. They help identify the exact and shortest possible route of the transmission line and the number of towers required along the route. Owing to the time-consuming nature and inaccuracy of conventional surveying techniques such as walkover surveys, utilities are now deploying LiDAR technology and drones for surveying. LiDAR is used in aerial surveys for topographic mapping through an aircraft. Powergrid is deploying helicopters equipped with LiDAR and thermovision cameras for aerial patrolling, and operations and maintenance of transmission lines and towers. Sterlite Power also deployed LiDAR technology for its Bhopal Dhule transmission project. Besides, utilities are using drones to assess the potential site locations, design site layouts, generate 3D visualisations and make RoW estimations.

On the tower design front, in order to minimise RoW requirements, reduce the visual impact, save cost and ensure ease of construction and installation, new tower designs such as pole structures, narrow-base towers and multicircuit towers are being adopted by utilities. Monopoles offer faster installation and greater flexibility in design. They can withstand extreme weather conditions and require much less space than lattice towers, thus significantly reducing the RoW requirement. Powergrid has been installing monopoles since 2008-09 to save space and avoid felling of trees. It is also using symmetrical monopoles at its 320 kV HVDC Pugalur-Thrissur line. Meanwhile, Delhi Transco Limited has installed monopoles in some areas. Utilities are also using narrow-base lattice towers for space optimisation. APTRANSCO has deployed narrow-base towers with a base roughly equal to that of a monopole in narrow corridors and on traffic dividers in cities. Another emerging transmission tower design is the multicircuit tower, which is designed to carry three, four or even six circuits to transmit bulk power at an economical rate. They are used at high voltage levels, particularly in forest areas and at substation entries.

For tower construction, the built-up method is widely used. In this, each tower member is installed in a sequence from top to bottom. Utilities also use the section method for transmission tower installation, wherein the major sections of the tower are assembled on the ground and are then erected as units, using a mobile crane or a gin pole. One of the emerging technology solutions for transmission tower erection is helicopters. Sterlite Grid has emerged as a pioneer in the use of aerial technologies. It is the country’s first transmission developer to have deployed an air crane to set up a power transmission line in the mountainous terrain of Jammu & Kashmir as part of the Northern Region Strengthening Scheme XXIX project. 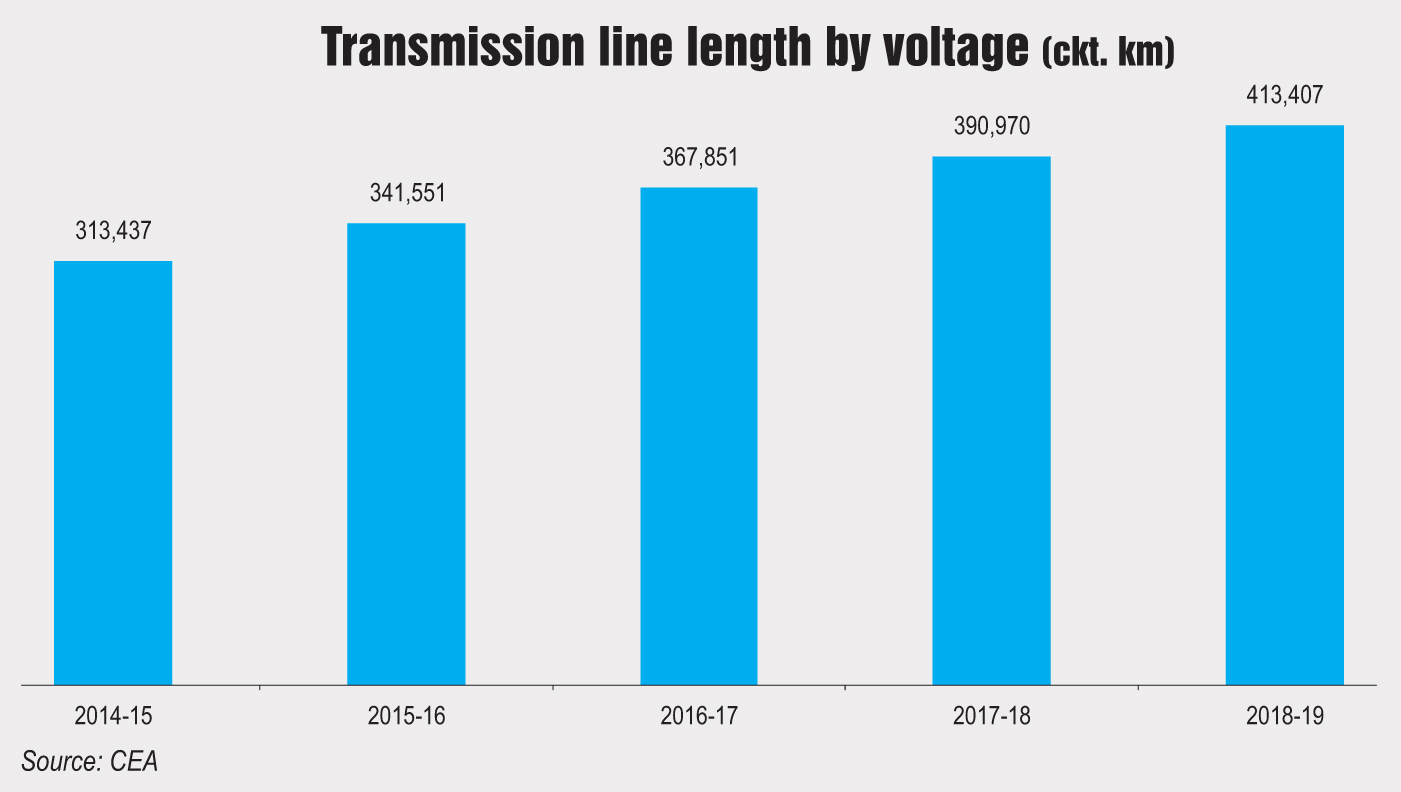 As per an expert report on the failure of EHV transmission line towers published by the Central Electricity Authority (CEA), 52 tower failures were reported across 16 transmission lines during October 2016 to March 2018. Of these, 41 towers (associated with 12 transmission lines) failed within five years of their commissioning. With regard to the type of tower, around 77 per cent of the tower failure incidents (40 in number) were reported across suspension-type towers and 23 per cent or 12 incidents were reported in tension-type towers. Thus, it can be concluded that the failure rate of suspension towers is much higher in comparison to tension towers. The failure of one suspension-type tower causes secondary failure of the adjacent suspension tower. The standing committee noted that high wind velocity during storms, cyclones and whirlwinds is the most common cause of failure. Besides this, tower design deficiency such as missing cover plates, missing bolts in joints, unplugged holes and a hanging erection trolley (used for stringing) could lead to tower failure. The other reasons of tower failure include change in the course of the river, fire underneath the tower, and rusting of tower legs and stubs.

To conclude, a large, robust transmission network is essential to ensure 24×7 reliable power supply for all, tackle power demand supply imbalances and maintain a stable grid. This has become all the more essential with large-scale renewable energy integration into the grid. Notably, in recent years, significant strides have been made with regard to network expansion and strengthening, and use of new technologies in the transmission segment. However, various challenges continue to hamper the development of the transmission network and timely execution of transmission projects. These include lack of harmonisation of policies and regulations across states, RoW constraints, and delays in obtaining environmental and forest clearances. Apart from this, for developing a robust transmission network, it is essential for utilities to adopt technologies that are suitable for the topography of the region and that can cater to the emerging power sector requirements.