With a focus on maintaining its leading position in the power sector, Bharat Heavy Electricals Limited (BHEL) is actively diversifying its operations. The engineering and manufacturing company has been a major provider of multiple solutions for the energy, industrial and infrastructure sectors for over five decades. In 2018-19, BHEL achieved a milestone with the commissioning of over 1,000 utility sets in the country. Over 53 per cent of the country’s total installed conventional power capacity has been installed using BHEL-make power equipment. BHEL is the country’s largest integrated power plant equipment manufacturer with a capacity of 20,000 per annum. With the changing dynamics of the power sector and the diminishing role of thermal power, BHEL is also realigning its strategies and looking at non-thermal businesses for future growth. At the company’s annual general meeting held in September 2019, Dr Nalin Shinghal, chairman and managing director, BHEL, said, “BHEL is working on a range of new products/systems for diversification into areas like transportation, defence, e-vehicles, water, and coal to methanol to develop new growth drivers. The company is geared to maintain its share in the existing portfolio of power business, and is upgrading its product profile to harness new opportunities in emission control equipment/systems, digital technologies and optimisation of natural resources like fuel and water.”

In 2018-19, BHEL received orders worth Rs 238.59 billion, a decline of 41.71 per cent over the Rs 409.32 billion recorded in the previous year. This can be attributed to subdued ordering in the thermal utility segment in recent years owing to a decline in capacity addition. The power sector, which accounts for 65 per cent of BHEL’s total order inflows, contributed to orders worth Rs 154.90 billion in 2018-19, a 53.54 per cent decline over the past year. The silver lining was that BHEL maintained 100 per cent market share in the main plant thermal utility segment. The industrial and international operations segments accounted for 30 per cent and 5 per cent respectively of the total order inflows.  Overall, BHEL’s order book has seen a fluctuating trend on a year-on-year basis. During the quarter ended September 2019, BHEL recorded order inflows of Rs 74.04 billion as against orders worth Rs 38.92 billion booked in the quarter ended June 2019.

In 2018-19, the company secured the main plant order for the 660 MW Sagardighi Extension Unit 5 from West Bengal Power Development Corporation Limited. This was the only main plant order finalised in the country during the year. In addition, BHEL secured orders for 17 flue gas desulphurisation (FGD) systems and two selective catalytic reductions (SCR) systems during 2018-19, including FGD orders from NTPC for projects totalling about 6.3 GW. During 2019-20, BHEL has so far secured FGD orders for the 1,980 MW Nabinagar Super Thermal Power Project in Bihar from Nabinagar Power Generation Company Limited and for the 1,000 MW Nabinagar thermal power station (TPS) in Bihar from Bharatiya Rail Bijilee Company. In addition, it has secured orders for a steam turbine generator package for the 1,320 MW Khurja thermal power plant (TPP) from THDC India Limited, and for renovation and modernisation of the Chilla hydroelctric project from Uttarakhand Jal Vidyut Nigam Limited. As of September 2019, BHEL had secured FGD orders for 56 thermal power units from various customers, making it a market leader in emission control equipment. These included orders for FGD systems for 42 thermal units of NTPC and its JVs. The company also secured key orders from Indian Railways, Nuclear Power Corporation of India Limited and Singareni Collieries Company Limited in the transport, nuclear and solar segments, respectively. With this, its total order book stood at Rs 1,086.03 billion as of September 30, 2019. Of this, the power sector accounted for an 81 per cent (Rs 879.24 billion) share, industrial sector for 10.3 per cent (Rs 112.05 billion) and export projects for the remaining 8.7 per cent (Rs 94.74 billion). 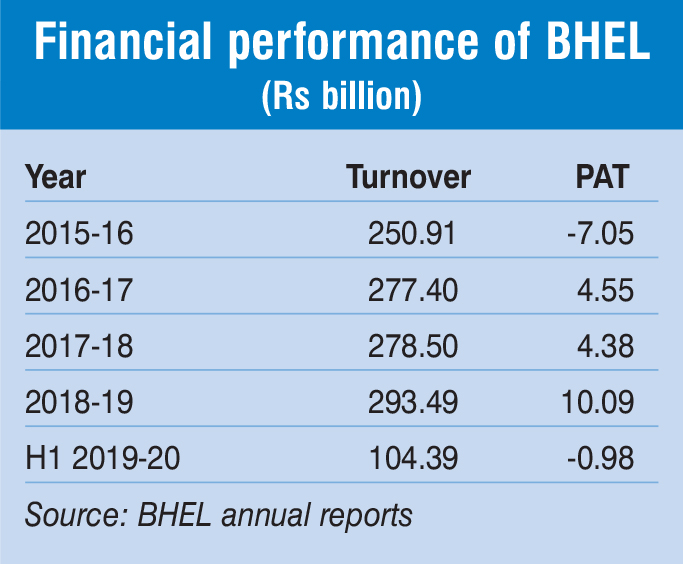 The company aims to increase its share in non-coal businesses. To this end, diversification initiatives are being undertaken in areas such as e-mobility, solar, defence and aerospace, transportation, electricity storage solutions and water. During 2018-19, BHEL supplied its first in-house manufactured 6,000 HP WAG-9H electric locomotives to Indian Railways and successfully developed the country’s first regenerative braking system for 5,000 HP WAG-7 electric locomotives. Recently, BHEL has signed an agreement with Container Corporation of India Limited to form a joint working group, BHELCON, for setting up a rail-based logistics terminal at Haridwar. The terminal will subsequently be developed into a multi-modal logistic facility. With this, BHEL has made a strategic entry into a new growth area.

In the solar segment, BHEL received its largest single engineering, procurement and construction order for 129 MW of solar PV power plants in Telangana from Singareni Collieries Company Limited. The company has also signed an MoU with GAIL for cooperation in the development of solar-based power projects. BHEL is also setting up a 1.7 MW pilot solar power plant for Indian Railways for directly feeding power into the traction system, in a first of its kind in the world. BHEL is also looking for opportunities in the e-mobility space. The company is foraying into manufacturing of EV chargers, electric buses and related critical components. It is setting up a network of solar-based electric vehicle chargers on the Delhi-Chandigarh highway. Five charging stations in the series were inaugurated in August 2019. In 2018-10, the company received its first order for the supply, installation and commissioning of 40 DC-001 chargers from Energy Efficiency Services Limited. BHEL has also contributed to India’s space mission by supplying propellant tanks, batteries and solar panels to ISRO for the prestigious Chandrayaan 2 project.

To build an international presence, the company is actively pursuing opportunities in the neighbouring countries as well as in the African market. In 2018-19, BHEL received an electromechanical package order of the 900 MW Arun-3 hydroelectric project, which will be the largest hydropower plant in Nepal. Other overseas orders were secured from Indonesia, Japan, Oman, Sri Lanka, Australia, Belarus and Bhutan, among others. A key achievement during the year was the commissioning of the 125 MW Sendou thermal power project in Senegal. This is expected to stregnthen BHEL’s position in the African market and open up more opportunities. The company also completed the 220/20 kV Charikar and Doshi substations in Afghanistan and commenced construction on its first supercritical TPP overseas, the 1,320 MW Maitree STPP in Bangladesh.

BHEL recorded growth during 2018-19 despite a decline in demand for the company’s traditional product lines and subdued performance of the domestic capital goods industry. The company recorded a turnover of Rs 293.49 billion as against Rs 278.50 billion in the previous year, an increase of 5.4 per cent. Further, the company recorded a consolidated income of Rs 310.29 billion in 2018-19 as against Rs 295.07 billion in 2017-18, an increase of 5.16 per cent. Its net profit increased 130.3 per cent to stand at Rs 10.09 billion in 2018-19 as against Rs 4.38 billion in 2017-18. However, the company’s financial performance has been subdued in 2019-20. For the half year ended September 2019, BHEL’s consolidated income declined by over 15 per cent to Rs 110.33 billion as compared to Rs 130.50 billion in the corresponding period in 2018-19. The decline in income can be attributed to the slow execution of orders and subsequent delay in revenue realisation from customers. The company also posted a net loss of Rs 979.8 million for the April-September 2019 period, as against a net profit of Rs 1.25 billion in the corresponding period in the past year. CRISIL’s long-term bank ratings for BHEL have slipped from “AA+” to “AA” on account of weaker-than-expected operating performance and the continued decline in net cash levels in the first half of 2019-20.

The domestic thermal power segment has remained subdued for the past three years and this is expected to continue in the near term owing to the growth of renewable power. Despite a dominant market share, BHEL faces risks of diminishing order inflows, stiff competition and declining margins. As per a recent report by Edelweiss, thermal power equipment ordering is expected to be 6–7 GW per annum even if power demand grows 6 per cent in the next seven years. Other challenges for the company include delays in payment of dues by utilities. In order to tide over the challenges in the power sector, BHEL is actively diversifying into new business areas such as solar, railway transportation, defence and aerospace, and e-mobility. The diversification efforts are likely to improve revenues from non-power businesses in the medium to long term. In the power sector, BHEL is favourably placed in the areas of emission control equipment, renovation and modernisation of TPPs, and high voltage transmission. The company is also focusing on fast-tracking project execution. At the company’s AGM, Dr Shinghal stated, “In the coming year, the company is focusing on strengthening the foundations for future growth by reviewing and tightening the execution methodology for the expeditious completion of projects, putting in renewed efforts for recovery of long due amounts to improve the working capital position and generate funds for future growth, and enhancing BHEL’s competitive strength by further improving the quality of its products and systems, among others.”

Net, net, with its strong experience, engineering and manufacturing base and technological expertise, BHEL is well positioned to leverage the existing as well as emerging opportunities.