With the power sector gearing up to operate electricity markets closer to real time, the concept of gate closure is gaining traction. The value of real-time market (RTM) operations could be significant with respect to grid reliability and optimal operations, particularly with the increasing share of intermittent renewable energy in the generation mix.

To deliberate upon the various aspects of gate closure and its implications on the Indian electricity market, in August 2019, the National Renewable Energy Laboratory (NREL), in association with the Ministry of Power (MoP) and Power System Operation Corporation of India (POSOCO), published a report. Titled “Opening Markets, Designing Windows and Closing Gates: India’s Power System Transition – Insights on Gate Closure”, the report is part of the Greening the Grid Program, which is a joint venture between USAID and the MoP.

In India, the Central Electricity Regulatory Commission (CERC)-appointed expert group first recommended the introduction of the gate closure concept in the scheduling process in its November 2017 report. Prior to this, in November 2016, POSOCO highlighted the need for gate closure in the scheduling process in its “Half-Year Analysis and Feedback Report on Reserves Regulation Ancillary Services (RRAS) Implementation in Indian Grid”. Gate closure has been recommended to avoid simultaneous changes in the schedule allowed by the decentralised process, which gives liberty to all the entities to alter schedules based on their requirement. Gate closure can give the system operator clarity about the quantum of reserves available at any point of time, and facilitate optimisation of the scheduled despatch and real-time ancillary despatch.

Recently, the CERC proposed amendments to various regulations to introduce gate closure as part of the planned RTM framework. The proposed RTM would provide discoms an alternative mechanism to access a larger market at competitive prices while allowing generators to participate in the RTM with their unrequisitioned capacity. Power Line presents the key highlights of the latest report on gate closure…

What is gate closure?

In a wholesale electricity market, gate closure refers to the time at which market participants must submit their final bids and offers. Gate closure can occur at a particular time or it can be defined with reference to each despatch period. Some systems use both approaches. For instance, power systems which have day-ahead market (DAM) and RTM may define both an initial and final gate closure time respectively.

Gate closure is a bid scheduling tool. It provides time for system operators to compare energy demand forecasts with the submitted schedules of generators. This data is used to identify reliability issues, determine the need for ancillary services and take action accordingly. To the generators and other balancing resources, it provides a prescribed amount of time to finalise their physical outputs based on contracted volume, notify the expected output to the system operator and reach their new specified despatch set points. The most crucial design decision in gate closure implementation is the length of time between gate closure and despatch. A trade-off exists between balance planning accuracy (unit commitment or scheduling) and market efficiency. A major determinant of the length of gate closure interval is the power system’s generation mix. Longer gate closure intervals may be necessary in systems that rely on slower ramping thermal units as marginal electricity suppliers, and vice versa for systems relying on fast-starting units. Availability of greater computing power and improved modelling also influence the gate closure interval. The global experience demonstrates a general trend towards power systems shortening the interval between gate closure and despatch.

Globally, gate closure takes several forms as electricity markets themselves reflect the unique institutional structure, resource composition and geography of each power system. In general, gate closure ranges from five minutes to approximately two hours ahead of despatch (Fig. 1). Markets with relatively larger generation capacity have opted for a gate closure time interval of 60 minutes or more. However, not all markets implement gate closure. For instance, the National Electricity Market, which is one of the two Australian energy markets, contemplated but later dismissed the option of introducing gate closure to address the late rebidding behaviour, in order to allow the market the maximum flexibility to reach efficient outcomes that reflect changing conditions.

A coordinated multilateral scheduling and despatch model has been in place in the Indian electricity market since 2001. An important aspect of the market is the decentralised nature of scheduling and despatch. This gives freedom and choice to load serving entities to revise capacity requisitions as well as accommodate inadvertent deviations from schedule within limits if grid conditions permit.

The Indian market comprises physical delivery-only contracts between generators and load serving entities. The Indian Electricity Grid Code (IEGC) lays the foundation for the scheduling and despatch process as a continuum of different long-, medium- and short-term contracts as well as close-to-real-time windows and products across the spectrum of stakeholders. The common thread throughout the continuum is the strategic goal of ensuring reliability, security and economy in the grid from planning to operations to settlement.

Over the years (since the introduction of open access in 2004 and collective transactions in 2008), various products and associated processes have undergone change depending on market requirements. The longest window available in the current market is the long-term access (more than seven years), followed by medium-term open access (three months-five years) and short-term open access (STOA) (up to three months in advance) (Fig. 2).

There are various products available in STOA in different time frames. Currently, there are four key STOA bilateral products in the Indian market – advance (three months in advance but approved one month at a time); first come, first serve (four days prior to the day of operation); day-ahead (from three days up to 15:00 hours of the day immediately preceding the day of operation); and contingency (open after 15:00 hours of the previous day up to 90 minutes prior to despatch). It may be noted that processing of day-ahead STOA bilateral applications is done only after processing the collective transactions of the power exchanges, thereby providing a mutually exclusive window. Overall, the current scheduling framework in the day-ahead and intra-day markets allows participants to start applying three days prior to the delivery day up to 90 minutes prior to delivery. There are several instances throughout the day when either a regional entity or a load despatch centre (LDC) may revise the schedules due to various contingencies. As per the IEGC, there are various provisions for revising the schedules effectively up to 30 minutes before despatch. This time frame allows system operators or LDCs to make suo motu revisions to schedules, if required, to maintain the load generation balance and grid security.

It may be noted that the “right to recall” (the unrequisitioned power from interstate generating stations) exercised by discoms to meet sudden changes in load is a product in the electricity market continuum (currently available up to four time blocks in advance on a rolling basis). When the application window for one product expires, the window for another product opens. Therefore, each window of product offers a new opportunity to market participants to balance the load/generation through a portfolio of products, thereby enhancing grid security and reliability. 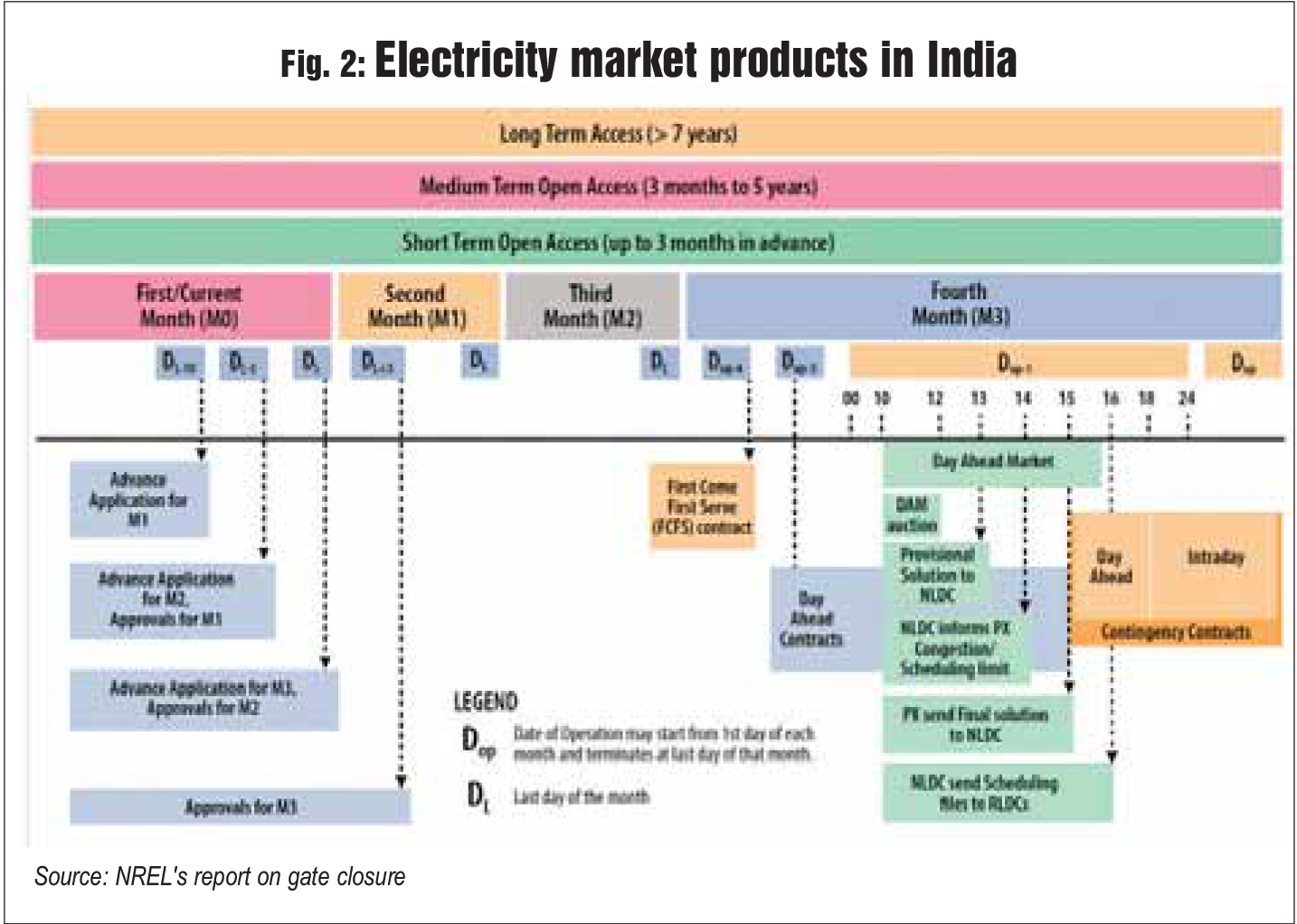 As mentioned earlier, policymakers and regulators have been discussing the need for the introduction of gate closure for the past two to three years. It has found mention in a number of reports and discussion papers.

Notified in August 2018, the MoP scheme on flexibility in generation and scheduling of thermal power stations to reduce the cost of power to consumers  highlights that a suitable provision for gate closure could be stipulated by the appropriate regulatory commission. The CERC has suggested incorporating the concept in the intra-day market design and emphasised its significance in the proposed market-based ancillary service mechanisms in two separate discussion papers released in 2018 –- “Re-designing Real time Electricity Markets in India” and “Designing Market for Tertiary Ancillary Services in India”.

POSOCO has been reiterating the need for gate closure to allow system operators to take over beyond a defined time frame and enable a thin centralised layer of optimisation over the present decentralised scheduling. This optimisation could be extended to tertiary reserves where more opportunities for co-optimisation of energy, ancillary services and reserves are under consideration. This has been highlighted in POSOCO’s “Consultation Paper on Security Constrained Economic Despatch of ISGS Pan-India”.

The Forum of Regulators (FoR) endorsed the recommendation of its technical committee for the introduction of RTM with gate closure and suggested to the CERC to take the idea forward (which is already under way as proposed in the latest draft amendments stated above). Another FoR subgroup report on the “Introduction of five-minute Scheduling, Metering, Accounting and Settlement in Indian electricity market” acknowledges that with coordinated multilateral scheduling processes, various activities may contribute to overlap with the schedule modifications being carried out by the concerned regional load despatch centre (RLDC). The quantum of available reserves is thus changing continuously and simultaneous ancillary service despatch has added another dimension of complexity to the process with potential parallel changes by the National Load Despatch Centre (NLDC) (for ancillary services) and RLDCs (for schedules).

The report lists the key considerations for a successful implementation of gate closure in any typical power system. These are primary control, secondary control through automatic generation control, different types of reserves with sufficient quantum, market design and regulatory framework, robust communication and IT infrastructure, and skilled workforce and capacity building. All the above aspects are either in place or under implementation in some form or the other in India. Further, in the Indian context, with the majority of power generation being coal based, generators need to receive despatch instructions at least 15 minutes in advance.

Hence, hourly gate closure is recommended even if the transition to five-minute scheduling and settlement occurs. Further, hourly gate closure complements the current renewable energy forecasting practice in India, as granular solar irradiance is available on a 30-minute basis. In a large power grid like that of India where there are multiple regional-level control areas for scheduling and energy accounting, the seams between different control areas and jurisdictions would be an important aspect for introducing the concept of gate closure.

Considering factors such as the predominance of thermal power generation in India, communication infrastructure, forecasting granularity challenges, the seams between different jurisdictions, limitations of granular weather data, IT upgradation, international experience, new products in the marketplace, decentralised scheduling and despatch model, complexity of contracts, and availability of windows and products, hourly gate closure would be a good option for the Indian electricity market. The NREL report suggests that hourly gate closure could possibly bring in greater efficiency and optimisation in the Indian electricity market than a shorter time frame gate closure. In order to ensure market clarity, ability to operationalise and compliance, it is best to introduce the concept through an amendment in the IEGC. Also, efficient and effective implementation would require parallel introduction in the state grid codes.

Gate closure must be introduced to ensure firmness of day-ahead schedules and for bringing in more certainty of despatch, especially in terms of reserve requirements and activation. The flexibility of revising the schedules will be with market participants (buyers and sellers) prior to gate closure. Thereafter, the system operators will take over and prepare for the predetermined delivery period. Shortening the time interval between gate closure and despatch will allow more opportunity to balance supply and demand economically through the market, reducing the need for regulation reserves. However, in a power system like India’s with huge thermal capacity having slow ramping rates, a reasonable time interval is required between gate closure and despatch.

Net, net, the introduction of gate closure is imperative in the Indian context. It is only a matter of time before it is implemented, as we gear towards operating the power system closer to real time. n