The Central Electricity Regulatory Commission (CERC), after deliberating on the contentious issue of transmission pricing for a couple of years, released the draft Sharing of Inter-State Transmission Charges and Losses Regulations, 2019, in October 2019. Once notified, these regulations will replace the extant CERC regulations (notified in 2010), which have been in effect since July 2011. In March 2019, the CERC-appointed taskforce, formed in July 2017 and led by former CERC member A.S. Bakshi, submitted its report to review the “Framework of Point of Connection (PoC) Charges”. In the report, the task force examined the existing PoC mechanism and suggested modifications.

The draft regulations, formulated based on the recommendations of the two committees, were initially open to stakeholder comments up to December 2, 2019. Subsequently, the CERC extended the deadline to December 31, 2019. Further, it also published the explanatory memorandum, which accompany draft regulations but were missing previously to lend clarity to the intent of various provisions.

Reportedly, some stakeholders have also requested the regulator to conduct workshops to get greater clarity on the subject. Several workshops were conducted when the existing regulations were introduced in 2010.

Over the past seven to eight years, the power sector has witnessed significant changes. With the rapid growth in generation and transmission infrastructure, India has transitioned from being a power deficit country to a power surplus one. The interstate transmission system (ISTS) has grown from yearly transmission charges (YTC) of Rs 100 billion in 2011 to Rs 360 billion in 2019. This has led to an increase in transmission charges for almost all entities, in varying degrees, depending on the allocation of charges, which are determined based on utilisation. Since the introduction of the prevailing PoC mechanism, several states have raised issues and sought improvements in it. The main aim of the CERC’s 2010 regulations was to make the sharing of interstate transmission charges sensitive to distance, direction and quantum of flow as required by the Tariff Policy. Overall, it has been observed that the POC mechanism has served its purpose, that is, enabled the power market and helped reduce congestion.

The current PoC mechanism is ex-ante, under which the allocation of charges is decided in advance, based on the projected load/generation for the next quarter. As a result, the states can project lower load and higher generation (which will lead to lower PoC charges) as there is no penalty for incorrect projections. In line with the recommendations of the task force constituted to review transmission pricing, the computation of transmission charges in the draft regulations has been proposed to be carried out ex-post every month, based on the actual all-India peak scenario of the month. The monthly transmission charges (MTC) will be considered under separate components defined in the proposed regulations. It may be noted that the CERC has refrained from using the term PoC in the draft regulations.

The basic principle of sharing of transmission charges among the DICs is to ensure that the YTC and related adjustments to the YTC are fully recovered. The computation of charges for each DIC will be based on the technical and commercial information provided by DICs, ISTS, NLDC, RLDCs and SLDCs to the IA.

The transmission charges are proposed to be divided into four parts – national component (NC), regional component (RC), transformer component (TC) and AC system component (ACC). The NC will be the sum of two sub-parts – NC-renewable energy (NC-RE) and NC-high voltage direct current (NC-HVDC). The RC includes RC-HVDC and reliability elements while the TC includes charges for interconnecting transformers planned for drawal of power by a state. These charges will be borne by the state. Finally, the ACC is divided into the AC-usage based component (AC-UBC) and the AC-balance component. The latter includes the balance charges for the AC transmission system after apportioning the charges for AC-UBC (see Figure).

It is applied for determining usage-based transmission charges. The existing PoC charges are also calculated using the hybrid method. A usage-based method aims to identify how much of the power that flows through each of the lines in the system is due to the existence of a certain network user in order to charge it according to the adopted measure of utilisation (average or marginal). The hybrid methodology for transmission pricing is a combination of the marginal participation (MP) method and the average participation (AP) method. Under this method, the slack buses are selected using the AP method and the transmission charge on each node are computed using the MP method. (The injection/demand at each bus needs to be counter-balanced by a corresponding increase in demand/generation at certain buses, called the slack buses.) The AP method selects geographically and electrically proximate buses instead of slack buses dispersed all over the network under the MP method.

The steps involved in the method are data acquisition, computation of the load flow on the basic network, identification of slack nodes, determination of transmission charges and sharing of such charges.

Determination of sharing of transmission charges

The MP factors will be computed, based on the AC load flow, to determine transmission system utilisation on account of marginal injection/drawal at each generating station/demand node. The YTC of each line based on modified line wise YTC will be attributed to injection/ drawal for the peak block. This YTC will be allocated to each agent in the proportion of change in flow in the network branch affected by that agent. Then, the AC-UBC charges will be calculated based on the hybrid methodology, and as per the following steps:

Transmission charges based on the hybrid method will be computed for each DIC every month. The charges allocated to each demand node will be grouped together within each state. Usage-based charges for billing towards LTA/ medium-term open access (MTOA) will be calculated only on drawal nodes and for generating stations with LTA to a target region corresponding to the untied power. The transmission charges for generating stations with no LTA or MTOA will be calculated as injection charges (like above generators with untied capacity) under the AC-UBC component. The charges for other DICs, for whom AC-UBC charges have been computed, will be scaled up to the extent of charges attributable to such generators.

Transmission charges and losses for the use of ISTS will be waived in the following special cases:

For projects that meet all these criteria, transmission charges will be waived for 25 years from the date of commercial operation date (COD)

For such projects, transmission charges will be waived for 25 years from the CoD 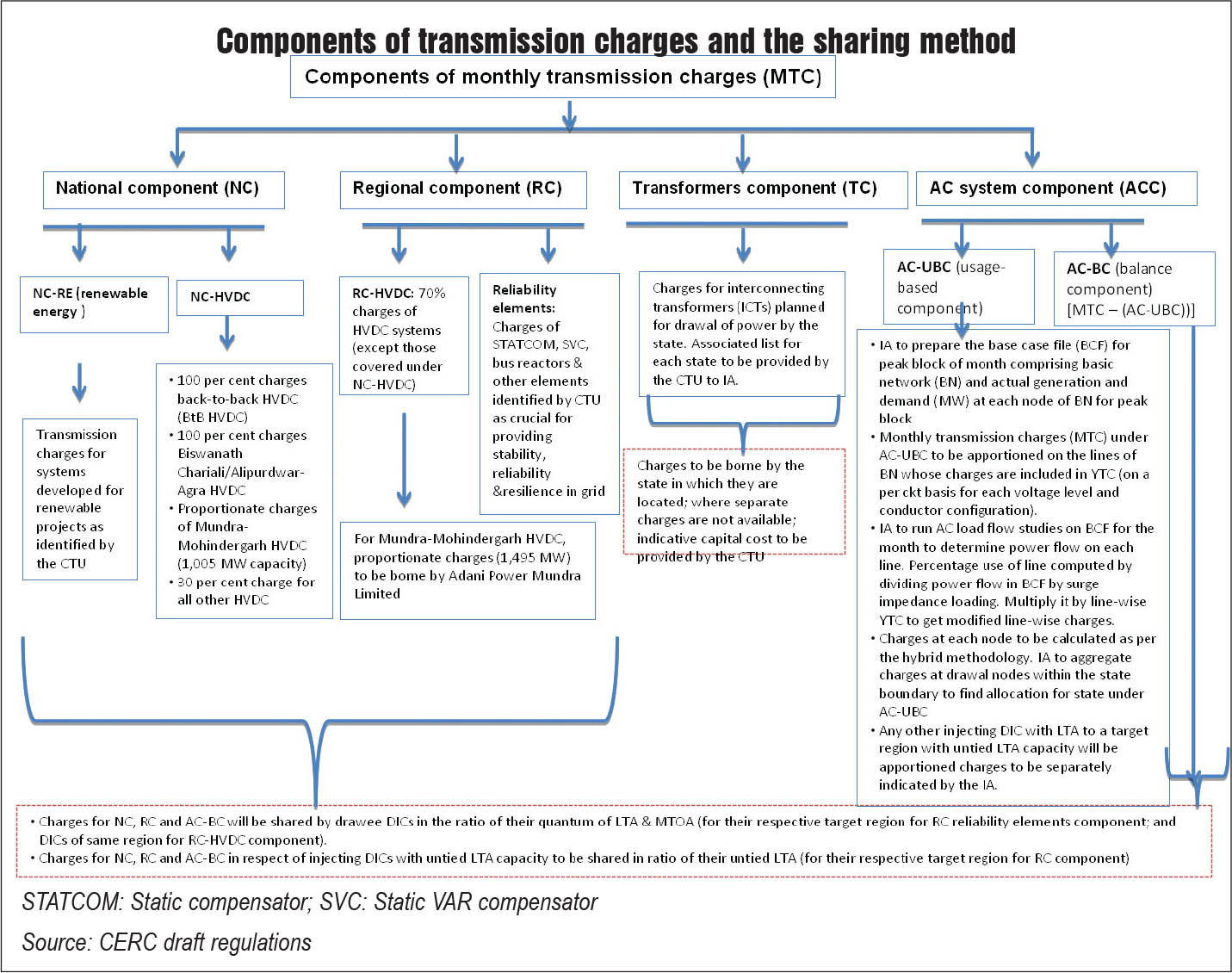 The drawal schedule of DICs will be worked out as per the provisions of the Indian Electricity Grid Code, after taking into account the transmission losses of the previous week, which are calculated by the IA as follows…

It may be noted that no transmission loss for the ISTS will be applicable while preparing the schedule for injection nodes including that for collective transactions over the power exchanges.

It is acknowledged that transmission cost allocation is a contentious issue worldwide. However, experts opine that transmission pricing must be kept as simple and easy to understand as possible. There is also a view that with the transition of India’s power sector to general network access, policymakers could consider moving from cost allocation based on zonal pricing to that based on access to the network where every grid participant, generators and drawing utilities, is liable to pay an entry and exit charge.

For now, grid participants have to focus on decoding the latest draft regulations in order to understand the details of the proposed methodology and their likely impact on the transmission charges payable by them. n