Power Grid Corporation of India Limited’s (Powergrid) ±800 kV Champa (Chhattisgarh)-Kurukshetra (Haryana) high voltage direct current (HVDC) project reached a new milestone recently, with the link now capable of transmitting 4,500 MW of electricity. This follows the commissioning of the third pole of the HVDC link by GE T&D India Limited in November 2019. The project comprises four poles, two of which were commissioned in 2017 under the first phase. The fourth and the last pole of the project is also expected to be commissioned in a few months, which would increase the power handling capacity of the link to 6,000 MW.

The Champa-Kurukshetra HVDC project was envisaged as part of the transmission scheme to carry electricity from power projects in Chhattisgarh to the northern region. At present, the north-west inter-regional transmission corridors mainly  comprise alternating current (AC) lines. However, in view of the long distance and the huge power transfer requirements of the northern region from the existing and upcoming generation projects in Chhattisgarh, the ±800 kV 1,367 km long Champa-Kurukshetra HVDC project was planned by Powergrid. The turnkey order for the execution of the project was awarded to GE T&D India, the listed entity of GE’s Grid Solutions’ business in India, in 2012.

The first phase of the project, completed in 2017, provided 3,000 MW of transmission capacity between the two states. Under this phase, pole-1 was commissioned in March 2017 and pole-2 was commissioned in September 2017. The rectifier station is located at Champa, where electricity is converted from AC to direct current (DC) and the inverter station is at Kurukshetra, from where power is transported to the surrounding areas after reconversion into AC. The second phase, which also comprises two poles (one of which was commissioned recently), is currently under implementation.

The project deploys advanced technology and is a pioneer on many fronts. This is the first ±800 kV project in the world having a dedicated metallic return conductor, instead of the conventional ground return path. The existing bipolar transmission systems utilise ground return electrodes for the return path in monopolar/unbalanced bipolar operation. However, there are certain constraints in ground return operation, which impacts the selection of ground electrodes. For instance, when HVDC is operating in ground return mode, the electrical potential distribution around the electrode station even up to a radius of 10 km (depending upon soil resistivity) gets redistributed and may corrode the underground buried metallic objects and disturb the cathodic protection of oil and gas pipelines. Besides, there are issues related to undesirable surface currents, leading to unacceptably high step and touch potential around the electrode site and flow of DC in the neutral of the transformer in the vicinity. Owing to these issues, the Champa-Kurukshetra HVDC project deploys a dedicated metallic return conductor as the return path.

The project also entails the integration of two separately designed bipoles that are running in parallel operation over the same DC transmission line, a feature only seen on two other HVDC projects in the world. Further, the HVDC system has the capability of stabilisation of AC systems in dynamic conditions. In addition, the system operator can control the flow of power in the HVDC link, that is, power can flow from Chhattisgarh to Haryana or Haryana to Chhattisgarh, depending on the requirement.

The Champa-Kurukshetra HVDC project is certainly a technological marvel and on completion it would further strengthen and enhance the transmission network in the country. Going forward, HVDC technology is expected to grow, given the country’s need to evacuate the large quantum of upcoming renewable energy. Further, various techno-economic factors such as the need for bulk transmission over long distances, high transmission losses in overhead AC lines, right of way issues and technological constraints of other extra high voltage technology options are likely to drive the growth of HVDC technology in the coming years. 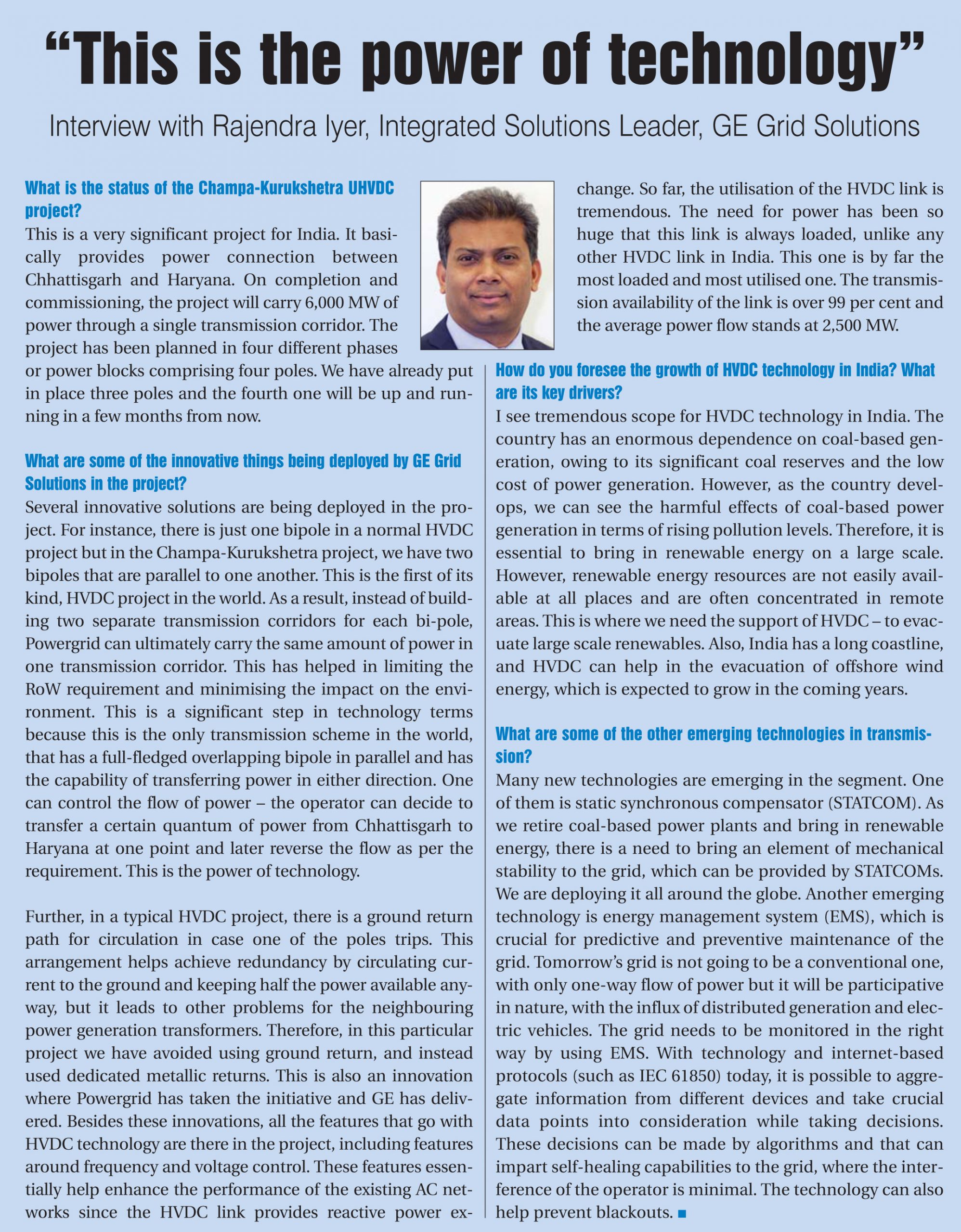