In India, coal is irreplaceable as the prime energy source with around 72 per cent of the entire power generation in the country dependent on it. Coal India Limited (CIL) leads India’s coal production, accounting for around 83 per cent of the entire output. The company has been working towards ramping up its coking and non-coking coal output. In 2018-19, it crossed the 600 million tonne (mt) mark in coal production and offtake for the first time.

Of its overall coal production in 2018-19, non-coking coal accounted for 94.4 per cent and coking coal for 5.6 per cent. Technology-wise, the majority of CIL’s production comes from opencast mines (576.4 mt) with only a small share coming from underground mines (30.48 mt). Subsidiary-wise, the highest contributors to the production were SECL (157.35 mt), followed by MCL (144.15 mt) and NCL (101.5 mt). SECL became the first subsidiary of CIL to exceed the 150 mt production mark, while NCL surpassed its production target of 100 mt and became the third subsidiary of CIL to join the group of 100 mt producing companies after SECL and MCL. ECL and WCL also became 50 mt-plus companies for the first time. In 2019-20 (till November 2019), however, CIL’s growth has declined. The mining company has produced 330.38 mt of coal in this period, marking a 7.8 per cent decline over the 358.3 mt produced during the same period last year.

Meanwhile, the coal offtake in 2018-19 stood at 608.14 mt, marking a growth of about 4.8 per cent from 580.3 mt in the previous year. Of this, CIL supplied 491 mt of coal to thermal power plants, a 8.2 per cent increase from 454 mt during the previous year. Amongst its various subsidiaries, SECL recorded the highest offtake of 156.03 mt in 2018-19, followed by MCL at 142.31 mt and NCL at 101.57 mt. In 2019-2020 (till November 2019), the coal offtake was 363.63 mt, a 7.2 per cent decline over the 392.02 mt in the same period last year. In a key positive, CIL, in December 2019, relaxed the norms for supplying fuel to its customers in the non-regulated sector by extending a letter of credit to them and allowing independent power producers (IPPs) to transfer coal from one plant to another. This facility was extended only to power generating companies, and the move is in pursuance of the government’s initiatives to improve ease of doing business in the coal sector. With the credit facility, non-regulated customers from the steel, sponge iron, cement and aluminium industries, MSMEs and IPPs will not be required to make 100 per cent advance payment for coal and this will enable them to run their plants smoothly. 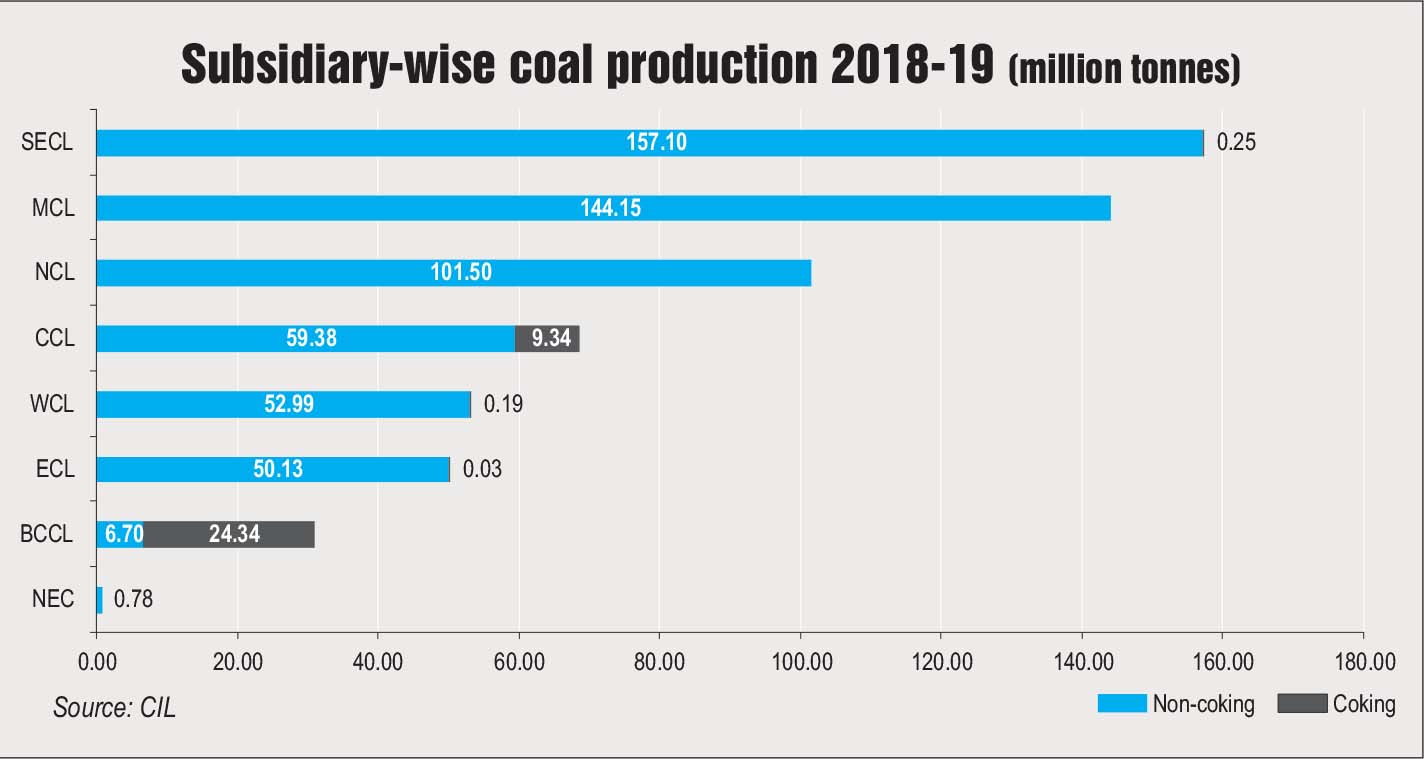 Apart from this, an IT-enabled operator – independent truck despatch system was introduced in 11 mines of CIL. CIL has also introduced mass production technology in underground coal mines. While two mines use powered supports and longwall technology, nine mines are operated with continuous miner technology. For rapid coal evacuation, 19 coal handling plants equipped with silos and rapid loading systems and an aggregate capacity of 152.5 mt are in operation. CIL recently announced plans to switch over to mechanised transportation of coal through piped conveyor belts in its large mines by 2023-24, replacing the existing road movement of dry fuel. The system is already operational in some of its mines.

The collaboration among Indian Railways, the Ministry of Coal and the Ministry of Power resulted in an overall growth of 5.6 per cent in rake loading during 2018-19 over the previous year. On average, CIL loaded 280.7 rakes per day during the fiscal as against 265.8 rakes in the previous fiscal. Two major rail links funded by CIL’s subsidiaries – the 52.41 km Jharsuguda-Barpali-Sardegarail link in Odisha and the 44.37 km Tori-Shivpursingle line in Jharkhand – became operational during 2018-19. Phase I track linking of the first 44 km of the Kharsia-Korichhapar single line under Chhattisgarh East Railway Limited has also been commissioned recently. Meanwhile, CIL and thermal PSU NLC India signed an MoU in October 2018 for the formation of a joint venture for solar power generation of 3,000 MW and thermal power generation of 2,000 MW. Recently, in November 2019, CIL issued an expression of interest inviting proposals from interested solar power developers and EPC contractors for setting up a 100 MW solar energy plant in Chhattisgarh. CIL also signed a Rs 2.7 billion contract with Tech Mahindra for the design and implementation of a robust, state-of-the-art enterprise resource planning and hospital management system at CIL and its subsidiaries. The project is expected to go live in September 2020. 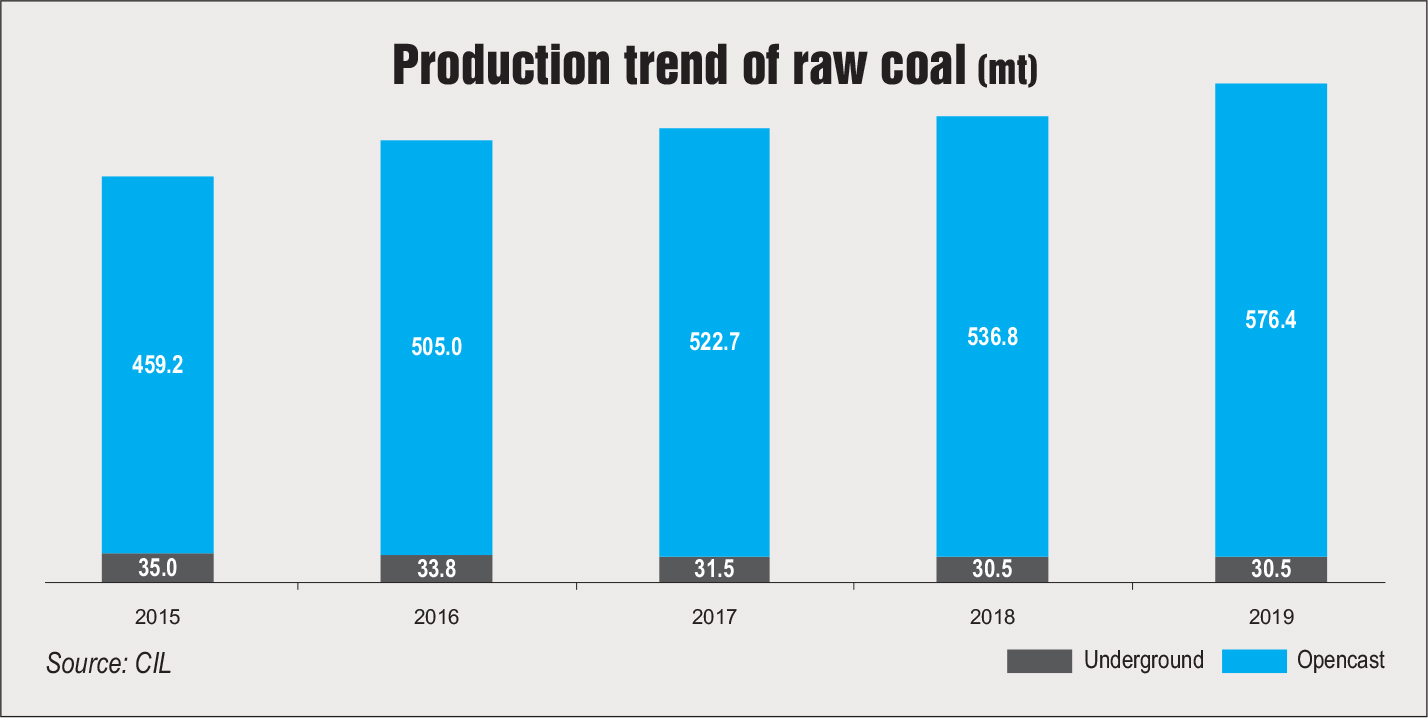 A major challenge for CIL is outstanding dues from state and other power sector utilities, which stood at Rs 84.35 billion as of March 31, 2019, as per a recent parliamentary panel report. Another issue is the high operating cost of underground coal mines. During 2018-19, the operating cost of an opencast mine owned by CIL was Rs 455.50-Rs 1,889 per tonne. For underground mines, operating costs ranged between Rs 4,879.80 and Rs 27,051.50 per tonne. To bring down operating costs, CIL is converting unsafe and unviable underground mines into opencast mines. The company has also deployed HEMM in opencast mines for coal extraction, and is also conducting e-reverse auction for explosives. Some other challenges faced by CIL are lower-than-expected volume growth and demand for new fuel supply agreements, rise in international coal prices, and a sharp increase in costs.

CIL is targeting an annual output of 660 mt for 2019-20, implying an 8.5 per cent year-on-year growth, in order to achieve its target of 1 billion tonnes of production by 2024-25. A capex of Rs 100 billion has been estimated for the year, including Rs 40 billion for equipment. In the next five years, CIL plans to launch 55 greenfield projects with a capacity of 92 million tonnes per annum (mtpa) and expand 193 brownfield projects aggregating 310 mtpa, stated the coal minister recently in a reply to the Rajya Sabha.  Meanwhile, in order to ensure coal quality and reduce ash content, CIL is planning to construct 18 washeries-nine for coking coal with a capacity of 24 mt and nine for non-coking coal with 63 mt of capacity. The washeries are expected to be commissioned by December 2020. Of these, a 10 mtpa washery at MCL is under construction, while letters of award have been issued for three others. CIL is also looking to expand its overseas business. Reportedly, it has identified coal assets in Australia. It is planning to appoint an internationally reputed merchant or investment banker to carry out the financial due diligence. CIL has earmarked about Rs 60 billion for the purpose.

Net, net, CIL’s plans to increase its mining and coal washing capacity, expand its rail infrastructure, and set up solar power plants will ensure that the company continues to play an important role in the country’s energy generation.