The projects, which will be implemented under the National Infrastructure Pipeline (NIP) mechanism, comes against the backdrop of the government’s push to achieve a GDP of $5 trillion by 2024-25, for which India needs to spend about $1.4 trillion on infrastructure.

Of the Rs 102 trillion projected outlay, conventional power and renewable energy projects will see significant outlays of Rs 11.8 billion and Rs 9.3 billion respectively. While the private sector is expected to take a lead in renewable energy investments, the investments in conventional and atomic energy projects would come largely from the public sector, the NIP report notes.

The task force for drafting the NIP is chaired by the secretary, Department of Economic Affairs (DEA), and includes senior officials from the finance ministry and NITI Aayog as its members. The terms of reference for the task force were to identify large, technically feasible and financially viable projects from all central government ministries for implementation during the period 2020 to 2025, validate their capital investment, and monitor their implementation.

The NIP has been drafted on a best-effort basis by aggregating the information provided by various stakeholders including ministries, departments, state governments and the private sector across infrastructure subsectors. The NIP constitutes projects that cost over Rs 1 billion each. To draw up the NIP, a bottom-up approach was adopted wherein all under-construction projects, proposed greenfield projects, brownfield projects and those at the conceptualisation stage were sought to be captured. Of the total Rs 102 trillion outlay, projects worth Rs 42.7 trillion (or 42 per cent) are under implementation, projects worth Rs 32.7 trillion (32 per cent) are at the conceptualisation stage and the rest are under development. Projects worth Rs 3,000 billion will be added to the infrastructure development roadmap after large states such as Gujarat, West Bengal, Rajasthan and Bihar share their updated lists with the finance ministry.

At an all-India level, the private sector accounts for about 22 per cent of the projects during the 2019-25 period, while the central and state sectors are expected to account for 39 per cent each.

In terms of sector breakdown, the energy sector – comprising conventional power, renewable energy, atomic energy, petroleum and natural gas – constitutes 24 per cent share. Other sectors with significant shares include roads (19 per cent), urban infrastructure (16 per cent) and railways (13 per cent).

The task force has made recommendations on the changes needed in key sectoral policies. It also highlights other reform initiatives to be taken up by the central and state governments, such as ensuring that the sanctity of contracts is upheld and that adequate safeguards are built in in the form of clearly quantified termination payments under various possible scenarios.

A monitoring mechanism has also been suggested to ensure timely implementation of projects. The task force has recommended the facilitation of joint ventures  between global and domestic companies in infrastructure as “only a handful of strong private sector participants are available, reducing the pace of infrastructure build-out through PPP modes”. 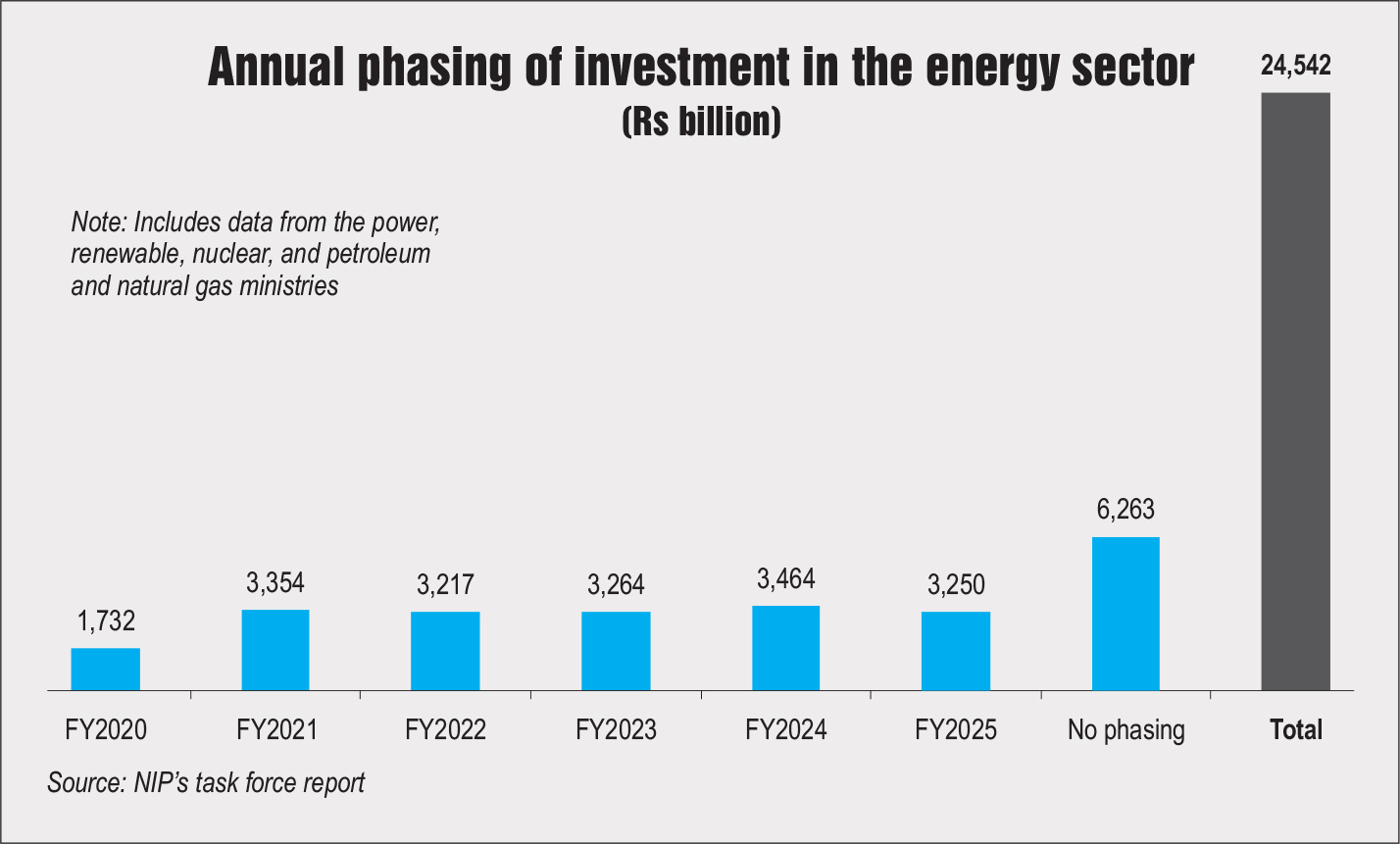 A major focus of attention under the NIP would be to improve the global competitive ranking for water and electricity utility infrastructure (India currently ranks more than 100) through the implementation of the UDAY 2.0 programme. 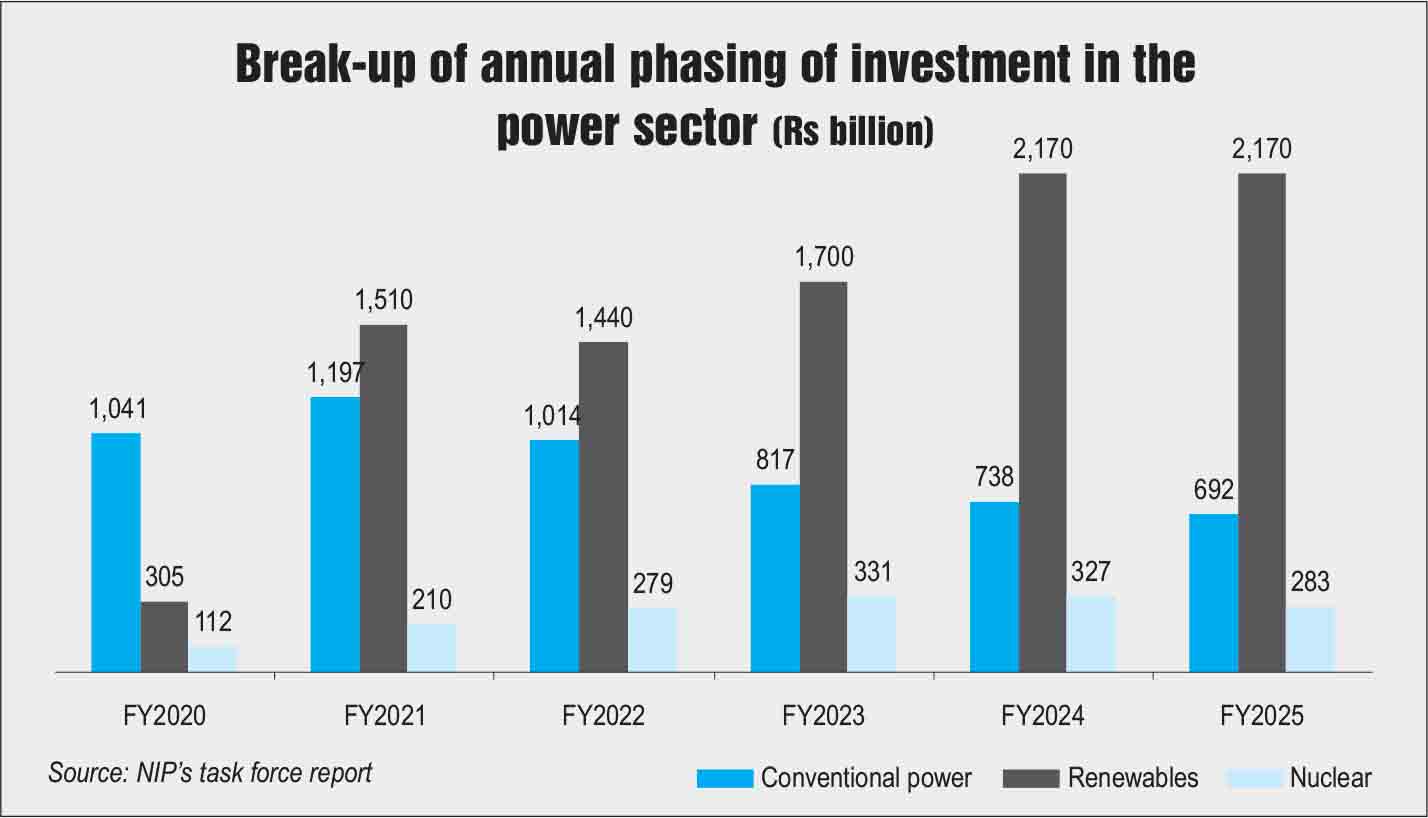 As for the investment roadmap, there is a variance in the sectors, as outlined below:

Conventional power: According to the NIP, the overall investments in the conventional power sector are expected to be about Rs 11.8 trillion. Almost 57 per cent of the investments are projected to be made by the states, 37 per cent by the central government and only 6 per cent by the private sector. The major projects in this sector would include the Dibang hydropower project (NHPC Limited) and the HVDC Bipole Link Project (Power Grid Corporation of India Limited).

Renewable energy: This segment has a well-stocked pipeline through fiscal 2025 given the 450 GW target visibility, the task force notes. The cumulative investments in the renewable energy sector are expected to be Rs 9.3 billion till fiscal 2025. Notably, unlike the conventional sector projects, 100 per cent of these projects are expected to be implemented by the private sector. In terms of the status of these projects, around 81 per cent are at the conceptualisation stages, 16 per cent are under development and the remaining 3 per cent are under implementation.

Atomic energy: The cumulative investments for the atomic energy segment are expected to be Rs 1.5 trillion in the forecast period. All the projects will be undertaken by the central sector. The entire investment is expected to be made in projects that are already under implementation. One of the major projects under execution as per the NIP will be the Kudankulam nuclear power project of Nuclear Power Corporation of India Limited.

Key concerns and the way forward

The unveiling of the NIP, a first-of-its-kind exercise, reiterates the government’s commitment to steer the infrastructure sector onto a higher growth curve and help mega infrastructure projects get off the ground.

That said, there is cautious optimism in the industry regarding the announcement. Financing the proposed investments under the NIP would be a key challenge. According to a CARE Ratings report, “Given the constrained finances of the government and the private sector in the backdrop of prevailing economic weakness, which is unlikely to see a noteworthy improvement over the next two to three years, the ability of the implementing agencies to finance these investments would be a challenge.” The state sector is expected to take the lead in financing the power sector investments with a share of 57 per cent of the total projected investments. 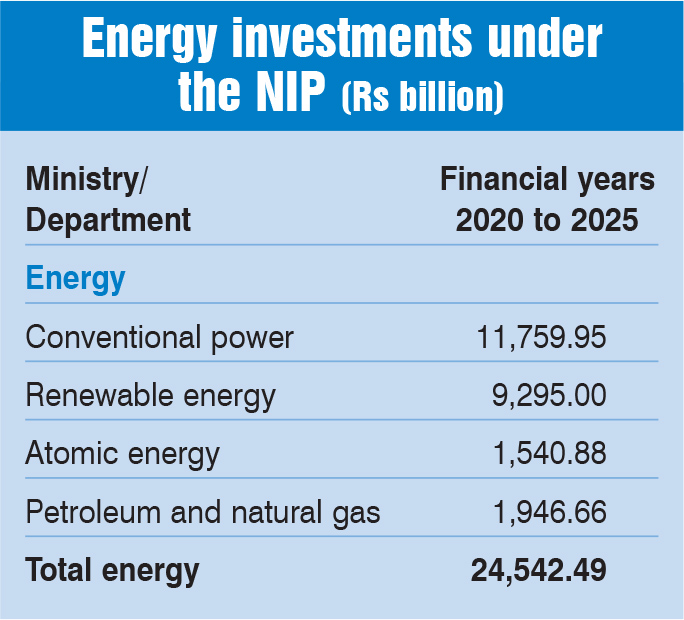 Analysts describe the NIP as work in progress, as more clarity is awaited on projects that are to be included in the NIP list. The finance ministry is reportedly expected to soon put out a detailed list of about 6,000 projects, which form the basis of the NIP report. The industry also expects more clarity on the NIP projects in the upcoming budget. Moreover, experts point out that given that the power sector is bogged down by several issues at the state level, such as overdue payments from state discoms to generators, renewable energy curtailment and the lack of discom appetite for signing new PPAs, the NIP will only be effective if the states are brought on board to deliver on the infrastructure pipeline.

For now, the fine print and action on the NIP are both keenly awaited.