They provide a host of other benefits to utilities as well, such as increased billing and collection efficiency, enhanced discom revenue, and  management of power theft and meter tampering.

The deployment of smart meters has  received a significant policy push in recent years under  various government schemes including  the IPDS, UDAY, the Smart Meter National Programme (SMNP) and the National Smart Grid Mission (NSGM). Further, the Union Budget 2020-21 urges the states to replace electricity meters with smart prepaid meters over the next three years. This is expected to create a demand for around 300 million smart prepaid meters in the coming years.

Smart meters help in lowering AT&C losses by preventing power theft and meter tampering, which cause a huge dent in discoms’ revenues. They help in the detection of abnormalities in power consumption and send signals to the discoms on a real-time basis. Further, they allow remote automatic meter reading, which is faster and more accurate, and eliminates manual reading. They also give discoms the option of remote connecting and disconnecting. Overall, the implementation of smart prepayment functionality helps improve the cash flow of a utility and significantly reduces labour costs.

Smart meters also offer a host of benefits to end consumers. They can monitor consumption patterns and accordingly ensure optimisation. They also enable  two-way communication between the  discom and the customer, better service delivery  as complaints against the discom can  be registered on the utility’s portal or mobile application, and necessary corrective measures. Better power quality will improve customer satisfaction.

Another advantage of smart meter usage is understanding end-consumers’ consumption pattern and undertaking load management. The smart meter generates huge volumes of data and, with the use of data analytics, this could provide meaningful insights into power consumption patterns. This could be useful for managing peak demand and load across regions and time, improving the quality of power supply, implementing advanced load management techniques, and undertaking demand-side management measures. 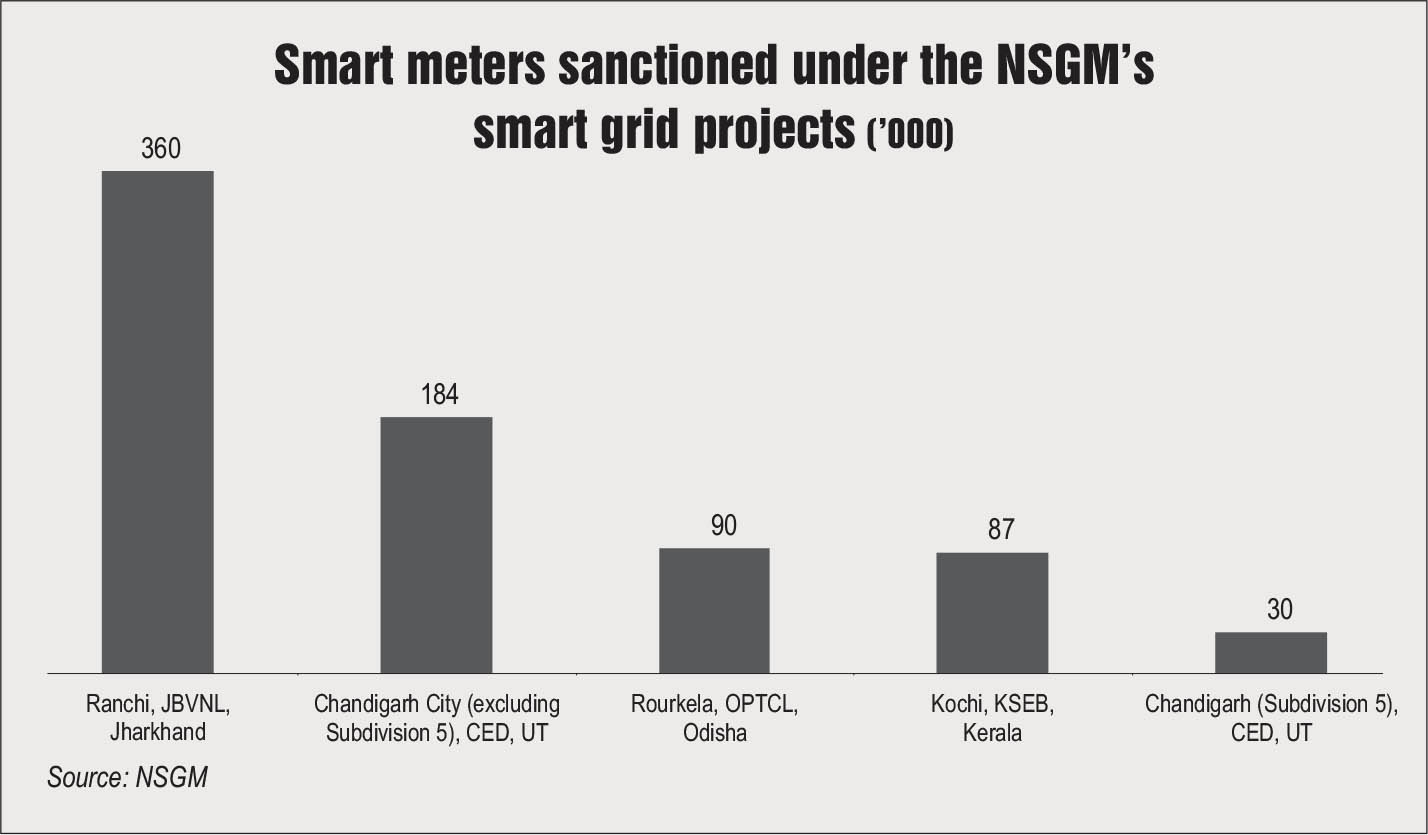 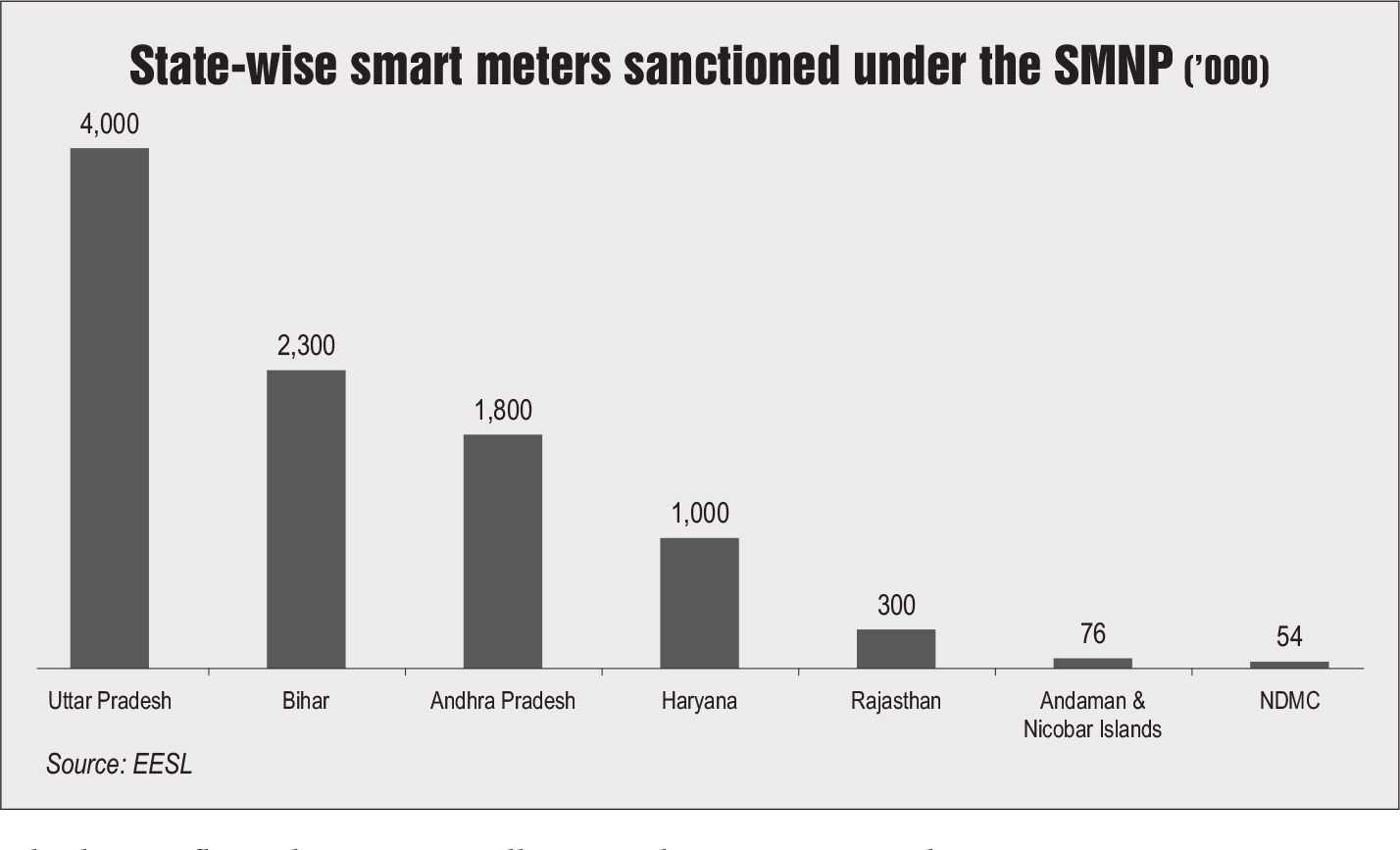 The IPDS, launched in 2014, envisages  the installation of smart meters with supervisory control and data acquisition  (SCADA) systems in all urban areas. The states can either procure them on a stand-alone basis or through an aggregator such as Energy Efficiency Services Limited (EESL) or PFC Consulting Limited. A project cost of Rs 8.34 billion and a government grant of Rs 5 billion have been approved for smart metering under this scheme and as of February 2020, disbursements of around Rs 9.5 million have been made. The installation of nearly 4.3 million smart meters across 24 discoms in 14 states has been sanctioned under the programme. As of December 2019, 98,280 meters have been installed under the scheme.

Implemented by EESL, the SMNP aims to replace 250 million conventional meters with smarter versions. To roll out the smart meter initiative, EESL is utilising its proven model of bulk procurement, aggregation of demand and monetisation of savings. It is based on the build-own-operate-transfer model wherein EESL receives a nominal internal rate of return, which is reflected in a mutually agreed automated payback structure. EESL has signed MoUs with eight states/union territories for the implementation of the scheme. These are Uttar Pradesh, Haryana, New Delhi (New Delhi Municipal Council [NDMC] ), Bihar, Rajasthan, Arunachal Pradesh, Andaman & Nicobar Islands and Andhra Pradesh. Besides this, Tamil Nadu, Chhattisgarh, Daman & Diu and Tripura are likely to join the programme soon. So far, EESL has issued three tenders for the procurement of 5 million smart meters each. The first tender,  on behalf of the Uttar Pradesh and Haryana utilities, was awarded to ITI Limited. The second, on behalf of Bihar and Andhra Pradesh, was secured by French integrated electricity company Électricité de France S.A. The third tender was issued in July 2019 for meter installation across the country.

Under the SMNP, as of December 2019, over 0.82 million smart meters have been installed, including 705,000 meters in Uttar Pradesh, 64,000 in Haryana, 54,000 in the NDMC area, and 5,000 meters in Bihar (in prepaid mode). Currently, 5,500-6,000 meters are being installed per day in 11 cities. EESL aims to ramp up the installations by 10,000-15,000 per day in the coming weeks. Larsen & Turbo, Électricité De France (EDF) and Robert Bosch GmbH have been appointed as system integrators and four meter suppliers are on board till date. Notably, NDMC has become the first municipal council in India to undertake 100 per cent smart metering in its areas of operations. The adoption of smart meters will lead to annual savings of Rs 124.7 million for NDMC that includes revenue recovery due to improvement in billing efficiency.

The Ministry of Power (MoP) has completed the implementation of 12 smart grid pilot projects, which entail 50 per cent funding from the union government. All these projects (excluding the Smart Grid Knowledge Centre at Manesar) involved the implementation of advanced metering infrastructure (AMI), along with other functionalities such as outage management systems, SCADA and demand response. Around 156,637 smart meters have been installed under the AMI component of these projects. Apart from this, five ongoing smart grid projects under the National Smart Grid Mission (NSGM), with 30 per cent funding from the MoP, also entail AMI/smart meter implementation. Around 750,500 smart meters are expected to be installed in five NSGM projects.

Moreover, maintaining a robust cybersecurity system is essential with the implementation of smart meters. Smart meters generate huge volumes of data and maintaining data security is vital. Besides this, it is essential for the utilities to undertake extensive data analytics to derive meaningful insights.

Also, a typical challenge for companies implementing smart meters is how to integrate them within their infrastructure and set up custom-tailored smart metering use cases. The best way to achieve these goals is by using an IoT platform.  An advantage of an enterprise-grade IoT platform is its data processing capabilities. With this, not only can utilities collect data from diverse smart meters in a centralized way, but also set up custom visualization dashboards, configure user alerts and notifications, and feed the collected data into other applications or data stores. Another advantage is the cost of smart metering implementation. Using an IoT platform allows discoms to have all the necessary functionality right away and focus on building particular smart metering use cases instead, saving time and avoiding the risks associated with in-house IoT development.

Net, net, for successful operation of smart meters and to achieve the desired outcomes, it is important for utilities to identify the required functionalities of a smart meter and the best-suited technology solutions. Apart from this, some of the initiatives that could facilitate faster uptake of smart meters are building the capacity of discom teams, creating consumer awareness and developing skilled resources across ecosystems.