The ongoing energy transition is driving utilities across the world to focus on digitalisation and automation through smart grid technologies. In India too, discoms have been working towards the roll-out of smart grid technologies in association with the power ministry. A significant development on this front over the past year was the completion of the pilots, which were under execution with financial support from the power ministry for a considerable time frame (announced by the Ministry of Power [MoP] in 2013). With these projects, discoms have been able to test and demonstrate several smart grid functionalities in real-time environments. The next batch of smart grid projects are now under way under the National Smart Grid Mission (NSGM) launched in 2015 with a total outlay of Rs 9.9 billion and a gross budgetary support of Rs 3.12 billion. Power Line presents an overview of the progress of smart grids under various government initiatives…

The MoP announced smart grid pilot projects to be implemented by various state-owned distribution utilities in 2013. In July 2019, all 11 pilots that were announced were declared “go live”, completed or commercially operated. The pilot projects sanctioned by the MoP were taken up across Assam, Gujarat, Himachal Pradesh, Haryana, Karnataka, Punjab, Telangana, Tripura, Puducherry, Uttar Pradesh and West Bengal, at a total cost of Rs 2.9 billion (including Rs 1.3 billion government funding). All projects have been partially funded by the MoP, except the project developed by the Uttar Haryana Bijli Vitran Nigam (UHBVN), which was completely funded by the New Energy and Industry Technology Development Organisation.

The MoP engaged the Quality Council of India (QCI) to assess the impact of smart grid pilot project implementation. The QCI conducted an impact assessment activity in nine discoms,  Indian Institute of Technology Kanpur, and the Smart Grid Knowledge Centre at Manesar (Haryana). As per the impact assessment study (based on the information provided by the discoms as of March 2019), it has been found that nearly 156,000 smart meters have been installed under these pilot projects. Also, the utilities have achieved a reduction in aggregate technical and commercial (AT&C) losses of close to the targeted levels. In addition, the integration of smart grid systems with the Restructured Accelerated Power Development and Reforms Programme (R-APDRP) modules has been achieved in pilot projects in Tripura, Assam and West Bengal. 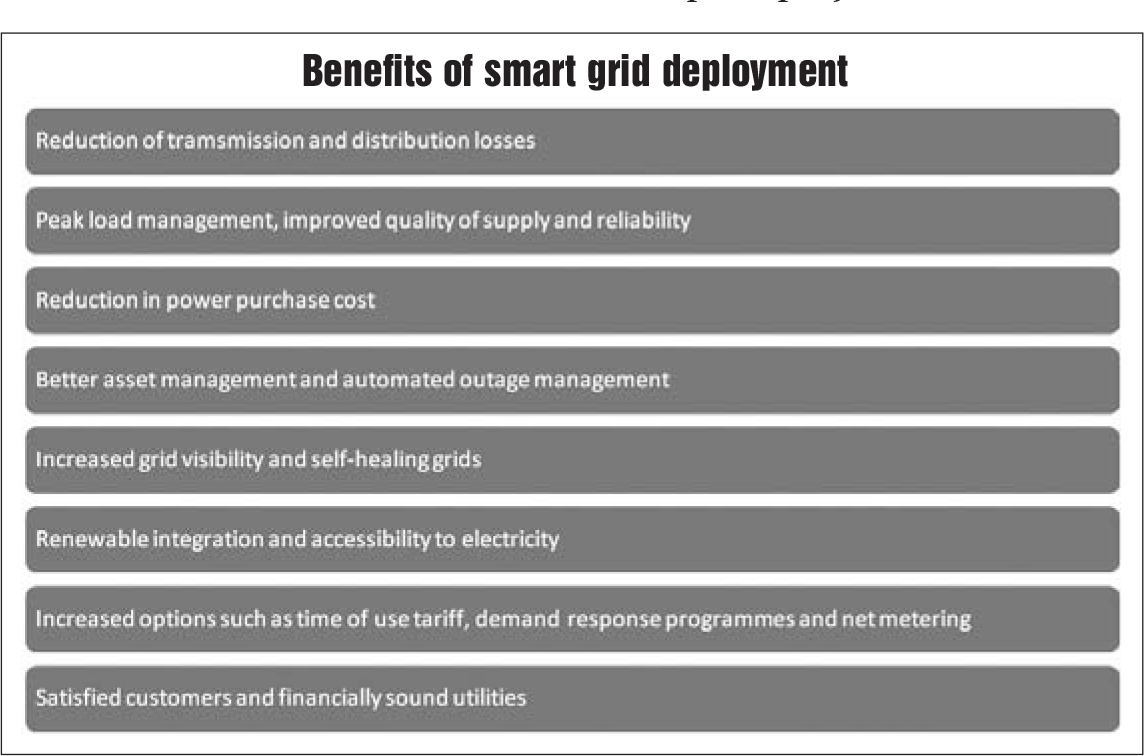 Further, consumer portals have been developed and shared with them as part of the pilot projects. PLM has been successfully tested; however, it was delayed due to regulatory constraints. For instance, the Gujarat Electricity Regulatory Commission has asked the discoms to file a petition along with two-year valid data from the smart grid system. The discom is working to present its case before the commission with historical data. 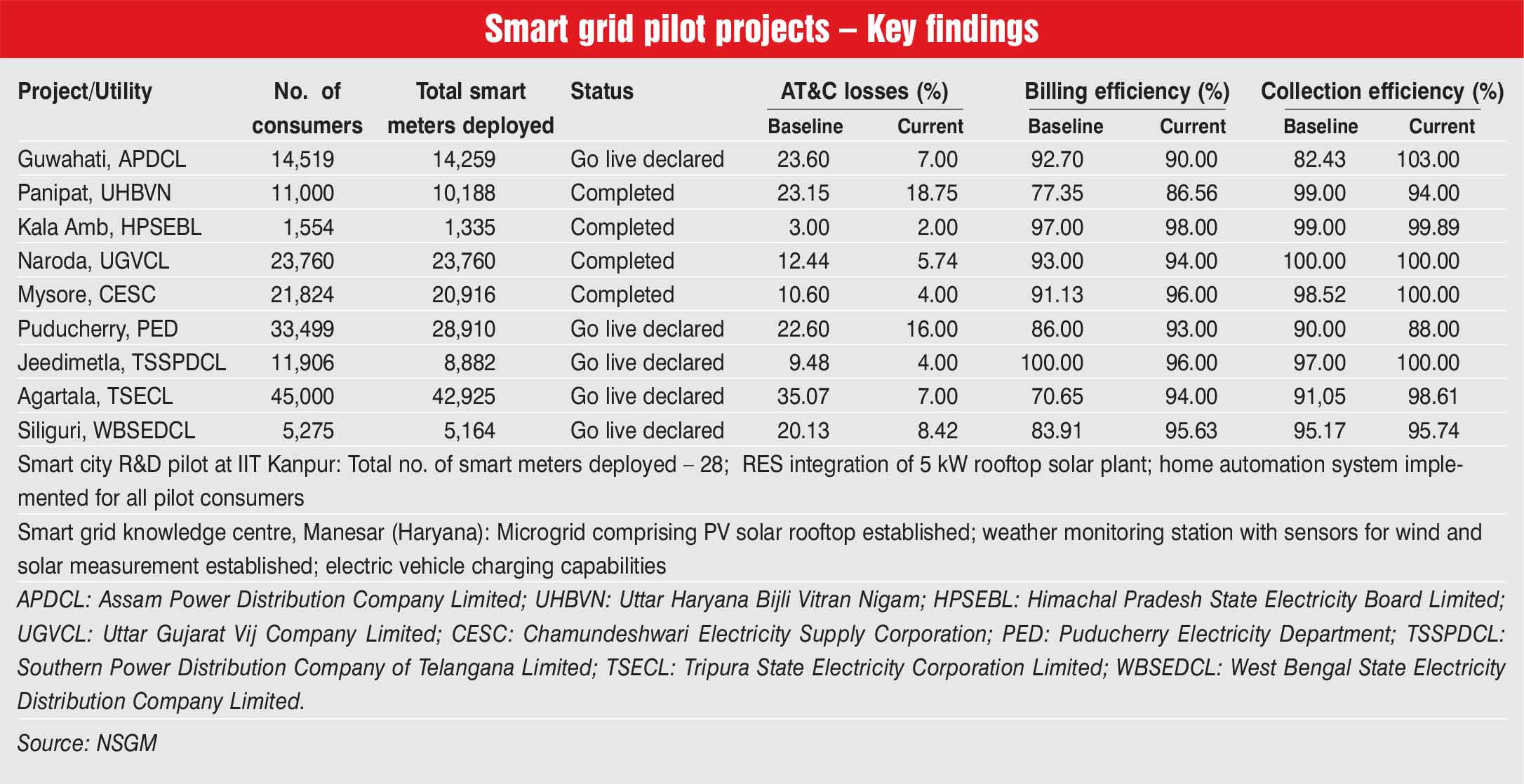 The remote connect/disconnect features have already been tested by some utilities, while others are in the process of obtaining regulatory approval for the same. The IIT Kanpur smart city’s research and development (R&D) platform is a showcase model with a potential to test integration with smart cities. The project has deployed applications such as home automation system, renewable energy integration, segregation of essential and non-essential loads, among others. Similarly, the Smart Grid Knowledge Centre at Manesar has become a unique set-up for showcasing live working models of smart grid functionalities and also for imparting training and capacity building activities for skill development of utility professionals and engineers. The major functionalities deployed at the centre include AMI, PLM, renewable energy integration and smart home automation system.

Consumer resistance was observed in some of the pilot projects during the initial phases. In order to overcome these issues, sensitisation programmes were carried out by utilities to spread awareness through pamphlets, articles and meetings. Though consumers are less aware about smart grid technologies, they have reported improved quality of power supply, following the implementation of the pilot projects.

The next step after successful completion of pilot projects is to scale them up by building innovative business models. New advancements in smart grid technologies and business process redesign and developments would be required to be incorporated in the new and upcoming projects. The analysis of data available through smart meters is expected to aid in decision-making by utilities. 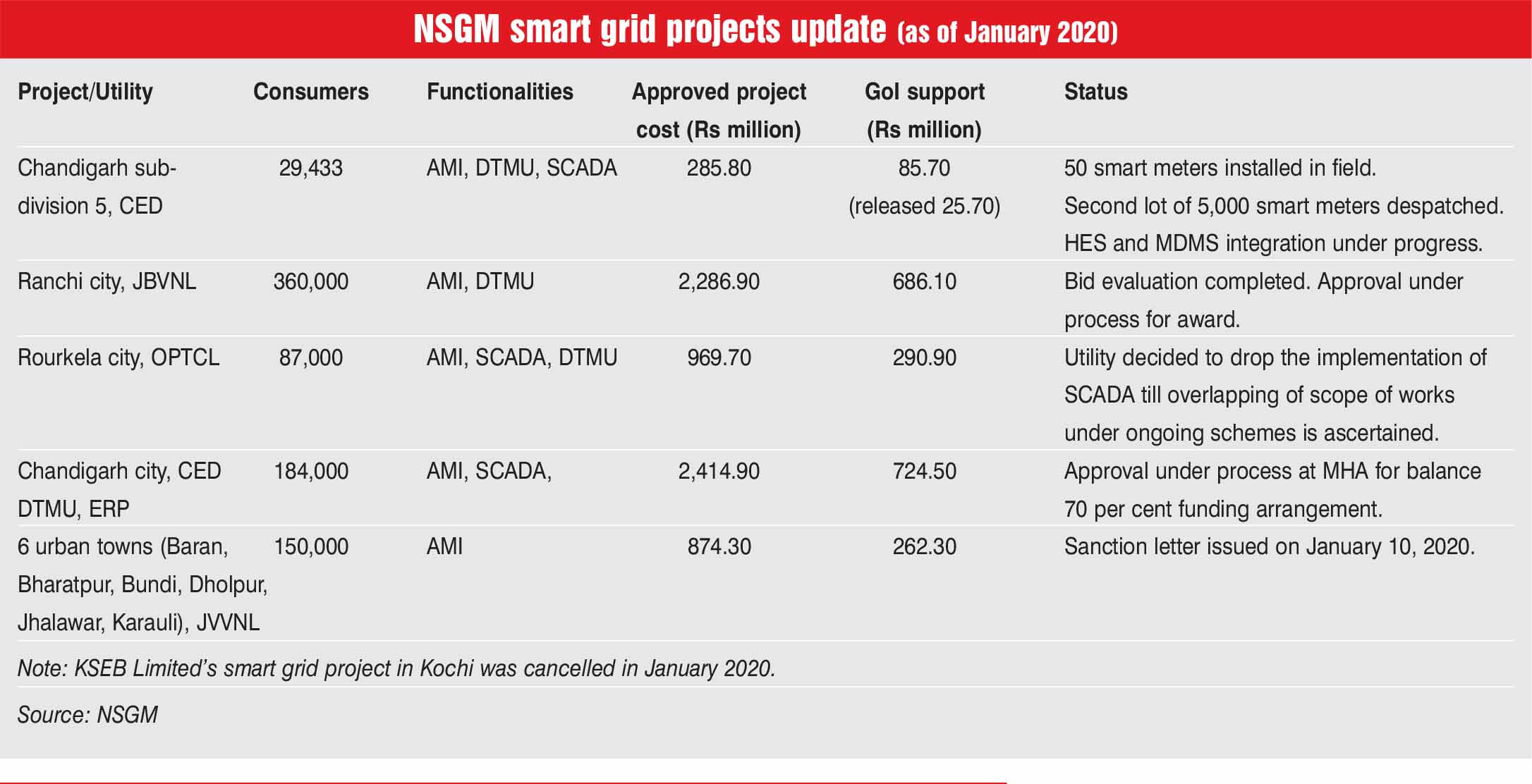 The NSGM, launched in 2015, functions under the aegis of the MoP, planning and monitoring the implementation of policies and programmes related to smart grid activities in the country. At the state level, the NSGM focuses on the establishment of statelevel project management units (SLPMUs), capacity building and developing preparedness for effective implementation of a smart grid. At the utility level, the NSGM, through state smart grid cells, is engaged with key stakeholders to ensure that they have the required structure and plans in place for successful implementation of a smart grid. The NSGM goals relating to smart grid roll-out are distributed in two phases and are expected to be achieved by 2025.

Altogether, these projects will cover 810,430 consumers, entailing an investment of Rs 6.8 billion, partially funded by a grant from the central government. Key functionalities to be covered in these projects include AMI, distribution transformer monitoring unit (DTMU), SCADA and enterprise resource planning (ERP). Earlier, a smart grid project was planned by KSEB Limited in Kochi but the project was cancelled in January 2020. Under the NSGM, a framework document, a model request for proposal and a model detailed project report have been released. Further, 19 SLPMUs have been formed for the implementation and monitoring of smart grid projects and six states have so far issued smart grid regulations. 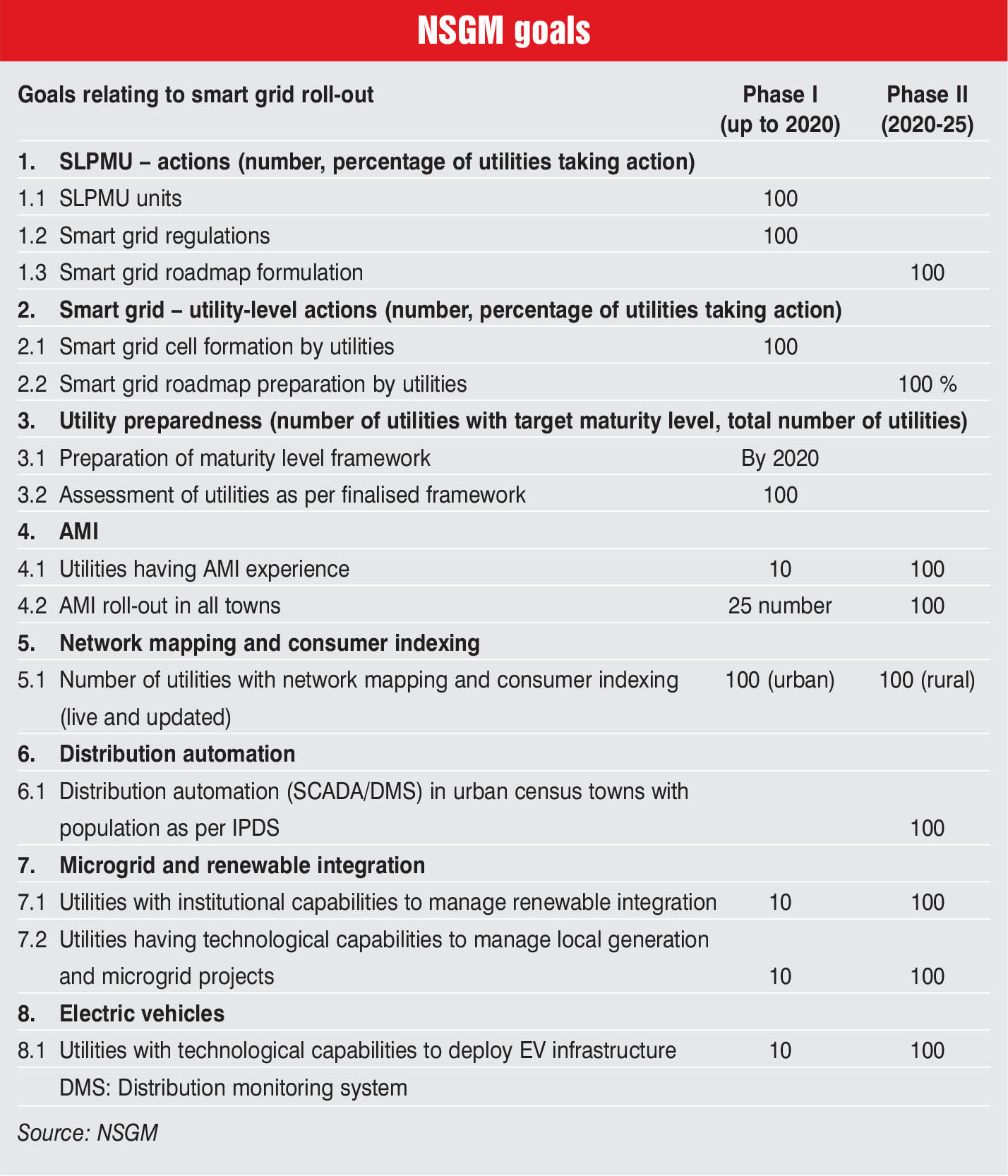 The implementing agencies faced various challenges while executing pilot projects and learnings from these projects should be incorporated in upcoming projects. For instance, consumer indexing is an issue because whenever a new consumer is connected to a new distribution transformer, certain discrepancies in billing are observed. Besides, there are challenges in obtaining regulatory approvals for PLM, remote connection/ disconnection of consumers, etc. The integration of the smart grid system with the existing legacy R-APDRP or metering, billing and collection systems requires a well-laid-out plan. Further, no smart meter standards were available at the time of their initial deployment. As a result, only a few utilities have deployed IS 16444-compliant smart meters. Also, though the standard specifies the use of internet protocol version 6 (IPV6), major telecom service providers support IPV4 at present.

In addition, the choice of communication mediums for utilities is hampered by geographical issues, lack of service providers, and non-competitive tariffs. Also, communication modules are generally non-flexible as they are integrated with smart meters of a particular vendor, which lack interoperability. Other issues include consumer resistance and lack of manpower skilled in smart grid technologies.

To conclude, the turnaround of the distribution utilities in the country hinges on successful technology implementation. Going forward, discoms need to expedite deployment of smart grid technologies/ systems to transform into world-class utilities with superior consumer services and efficient energy delivery.