The ceation of high voltage long distance corridors to deliver electricity to high-demand regions and the development of green energy corridors for integrating the increasing share of renewable energy into the grid has spurred demand for high voltage lines. Innovative conductor designs are being developed to address the changing needs of the electrical utility industry and new alloys are being made to provide high temperature resistance, low sag, increased conductivity and other specific characteristics. High performance conductors are being deployed for carrying higher currents while allowing higher temperature ratings. Further, obsolete fluid- or gas-pressure cables are being replaced by new cross-linked polyethylene XLPE cables, offering greater tensile strength, elongation and impact resistance.

The conventional aluminium conductor steel-reinforced (ACSR) and all-aluminium alloy conductors (AAACs) are currently designed to operate at a maximum temperature of 85 °C and 95 °C respectively. The ordinary hard drawn aluminium used in the conventional ACSR starts annealing and losing strength at a temperature above 93 °C and is not suitable for use at such high temperatures. Thus, the ampacity of these conductors is restricted by the above-mentioned temperature and further enhancement of the ampacity is not possible. Ampacity in the same transmission line can be enhanced by using either larger-sized conductors or high performance conductors (HPCs). HPCs are designed to operate continuously at a temperature of at least 150 °C. Some of these conductors can continuously operate at temperatures as high as 250 °C without any degradation in mechanical or electrical properties.

To avoid annealing in HPCs, two options are used in conductor design. One option is to anneal the conductor’s aluminium intentionally in the factory before purchase and installation. The other option is to alloy the aluminium with zirconium in varying degrees to produce TAL, ZTAL/UTAL and XTAL designated alloys. Alloying of aluminium slightly increases resistivity, whereas annealing of aluminium lowers resistivity, thereby having better conductivity. The core material used in HPCs includes galvanised steel, aluminium cladded steel, mischmetal steel, INVAR steel (Fe-Ni alloy), high strength steel, metal matrix composites and polymer matrix composites (carbon fibre composite). For HPCs with annealed aluminium strands, the conductor stiffness and breaking strength are largely determined by the core. For HPCs with zirconium aluminium strands, the composite conductor strength and stiffness depend on both the reinforcing core and the aluminium strand layers.

HTLS conductors offer several benefits to utilities as they can be deployed in new transmission lines and can also be used for reconductoring of existing lines to increase their power transfer capacity. In the case of interstate transmission system lines, HTLS can be deployed at the 220 kV, 132 kV and 66 kV levels. At 400 kV, HTLS can replace quad bundle ACSR and AAAC conductors when the line length is short.

The comparative performance of HTLS conductors depends on the degree to which the aluminium strand and reinforcing the core’s physical properties are stable at high temperatures. The conductor choice is made by utilities based on their requirement, if a particular conductor is selected for a given condition.

Two of the most commonly used HTLS conductors are super thermal alloy conductor invar reinforced (STACIR) and aluminium conductor composite core (ACCC). STACIR conductors are very similar in construction to a conventional ACSR conductor but the EC grade aluminium wires are replaced with heat resistant aluminium zirconium alloy (generally known as STAL). SATCIR has a maximum continuous operating temperature of 210 °C and can have twice the current capacity of an ACSR conductor. ACCC conductors use a patented carbon/glass/thermoset resin core that provides height and strength and reduces height temperature sag. They can reconductor existing the pathway without structural modification and reduce capital expenses on new lines. They have 28 per cent more annealed aluminium in a trapezoidal configuration and an ACCC conductor of the same diameter as ACSR can double the current (ampacity) rating.

Cables are designed and manufactured as per voltage, current to be carried, operating maximum temperature and purpose of applications desired by customers. Cables are designed according to the number of conductors they contain and their size. The larger the diameter, the greater is the wire’s capacity to carry current. The most commonly used metal for wires is copper due to its efficiency as a conductor.

Several technologies have been introduced to enable utilities to augment their capacities without battling right-of-way (RoW) clearances.

XLPE, high density polyethylene, aerial bunched cables and spacer cable systems are the most commonly used covered cables. XLPE cables use cross-linked polyethylene as the main insulating material and can operate at higher temperatures, both for normal loading and under short-circuit conditions. Extruded XLPE cables are increasingly being deployed by utilities such as Power Grid Corporation of India Limited for setting up of the transmission infrastructure in difficult terrains.

XLPE cables use cross-linked polyethylene as the main insulating material. Cross-linking inhibits the movement of molecules under the stimulation of heat and this gives these cables greater stability at high temperatures, as compared to thermoplastic materials. XLPE cables can operate at higher temperatures, both for normal loading and under short-circuit conditions. These cables have a higher current rating than their equivalent polyvinyl chloride counterpart.

The joints for XLPE-insulated cables can be prefabricated at the factory, which reduces the installation time per joint at site. In addition, XLPE cables take less time to manufacture, which means that the same production unit can produce more cable per unit of time.

XLPE-insulated cables are also useful in direct current (DC) power transmission. Traditional DC power cables include oil filled or mass impregnated non-drain cables that have limitations for long distance power transmission. While the former require frequent oil refilling, the latter type suffer from low operating temperature. Extruded XLPE cables are increasingly being deployed in new underground transmission and have a high transmission capacity, which is not limited by route length. 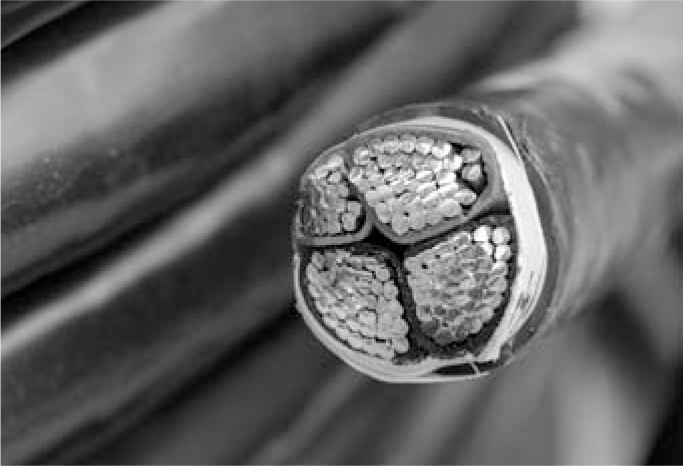 Gas-insulated transmission lines (GILs) have nitrogen and sulphur hexafluoride as the insulating medium. It comprises aluminium conductors supported by sealed tubes pressurised with gas nitrogen and sulphur hexafluoride in 80:20 proportion as the main insulation. GILs serve as a viable alternative to overhead lines where RoW is not available for electricity transmission. This is primarily because GILs can be installed under the ground as well as in tunnels and trenches. Moreover, the resistive losses of GILs are lower than those of overhead lines and they offer greater reliability with no risk of fire. These lines are ideally suited for metropolitan areas and cities where there is limited RoW for overhead lines. GILs can also be installed in agricultural areas and the ground above is still viable for growing crops. The installation of vertical GILs is popular in hydropower plants as there is no fire hazard associated with them.

Also, with the growth of smart grid technologies and the increase in renewable energy capacity, specialised cables are being designed. For instance, medium voltage smart cables, which integrate optical fibre cable with power cables, are preferred for smart grid applications. Underground cables offer an affordable and justifiable solution for critical parts, and in some cases, the entire length of overhead high voltage power lines.

The cable and conductor market looks positive, owing to the continuing investments being made by the government through its various schemes and increasing renewable energy capacity addition. Also, adoption of the latest technologies to develop conductors that have the ability to increase the current-carrying capacity of existing lines will significantly improve the overall economics of new lines.