Population and economic growth, clubbed with rapid urbanisation, have been driving the massive demand for construction activity in India, wherein two-thirds of the building structures that will come up by the year 2030 are yet to be built.

Building energy codes are effective tools for achieving energy efficiency in the construction and operation of buildings. The rating system for green buildings was started in the early 2000s with the Green Rating for Integrated Habitat Assessment (GRIHA), which evaluates the environmental performance of a building holistically over its entire life cycle. It was started by TERI (as it is called today) and the Ministry for New and Renewable Energy (MNRE), followed by the efforts of the Indian Green Building Council (IGBC).

Together with government agencies as well as local and international experts, the Ministry of Power’s Bureau of Energy Efficiency (BEE) developed the Energy Conservation Building Code (ECBC) for commercial buildings in 2007 and amended it in 2017. The code basically prescribes the energy performance standards for commercial buildings to reduce energy consumption.

It has been observed that ECBC-compliant buildings are 17-42 per cent more efficient than the conventional ones, which shows a tremendous potential in terms of energy savings. Therefore, the ECBC should be made mandatory and be incorporated into the municipal building by-elaws of all the states.

In order to encourage other stakeholders, in July 2019, the BEE and the Central Public Works Department signed an MoU to make 150 buildings energy efficient in India, which would save almost 50 MUs of electricity per annum.

As per the BEE, with the implementation of this energy efficiency label, energy savings are estimated to be up to 40 per cent compared to traditional houses, with annual savings of 90 billion units by the year 2030.

A number of municipal corporations (such as those of Pimpri-Chinchwad and Nashik) offer tax and premium rebates for such buildings along with property tax discounts for both buyers and developers.

Several states and cities have made strong progress in adopting the ECBC, working with state-designated agencies, urban local bodies, leading real estate developers and other stakeholders.

In January 2020, the State Energy Efficiency Index 2019 report, which tracks the progress of energy efficiency initiatives in 36 states and union territories based on 97 significant indicators, was released. The index has been developed by the BEE and NitiAayog, in association with the Alliance for an Energy-Efficient Economy. It focuses on the implementation of clean energy projects in various states along with the energy efficiency targets. This time, Kerala (which reported a high energy efficiency rating in its construction sector) and Rajasthan occupied the top spot, followed by Andhra Pradesh, Maharashtra, Punjab and Rajasthan. These states were evaluated across sectors such as building, industry, municipality, transport and agriculture.

Another report, issued in September 2019 by the National Resources Defense Council and the Administrative Staff College of India, analyses the status of implementation of the building energy code across Indian states. The report includes a how-to-manual designed for states to advance energy efficiency implementation.

States that have notified the code include Andhra Pradesh, Haryana, Himachal Pradesh, Karnataka, Kerala, Odisha, Punjab, Rajasthan, Telangana, Uttar Pradesh, Uttarakhand and West Bengal as well as the Union Territory of Puducherry. The states of Telangana and Andhra Pradesh have implemented mandatory codes with an online compliance system. Uttar Pradesh and Himachal Pradesh are the only two states that have amended, revised and notified the state code to adopt ECBC 2017. Uttar Pradesh is also enforcing the code by incorporating it in the building by-laws.

Based on discussions with key state officials, experts and stakeholders, the report makes five key recommendations for fast-tracking ECBC implementation at the state level in India: 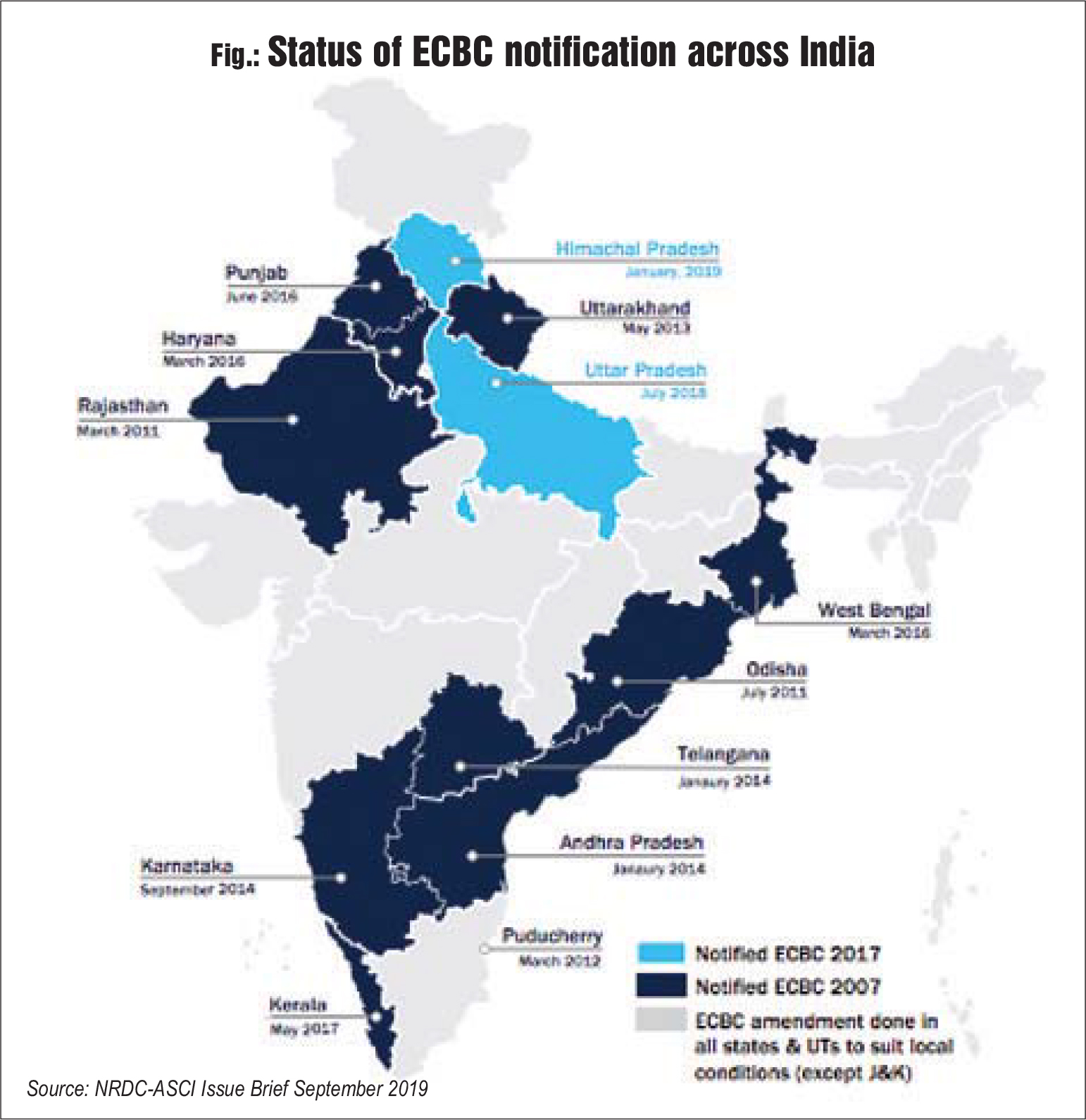 Leadership in Energy and Environmental Design (LEED) is a widely used green building rating system. India ranks third among the top 10 countries for LEED and today there are nearly 3,200 projects that are participating in the LEED initiative in India.

In the second edition of the US Green Building Council’s (USGBC) list of India’s top 10 states that have the maximum number of LEED-certified green buildings (in terms of cumulative gross square feet of certified space) announced in June 2019, Maharashtra has 334 LEED-certified green buildings, while Karnataka and Tamil Nadu have 232 and 157 buildings respectively. Last year’s list saw Tamil Nadu in the top position with 118 such buildings. The top 10 states for LEED are home to more than 840 million Indians and together include more than 475 million gross square feet of the LEED-certified space.

To get all the stakeholders together, the Confederation of Indian Industry (CII) established the IGBC to help India become a global leader in sustainable-built environment by 2025. With a modest beginning in 2001 of 20,000 square feet of green footprint in the country, over 5,564 IGBC green building projects, amounting to 7 billion square feet, have adopted IGBC green building rating systems, as of December 2019. The IGBC aspires to facilitate 10 billion square feet of green building footprint by 2022, post which India will potentially displace the US and China to take the pole position.

Amid the growing demand for land, water and electricity in metros such as Delhi, Mumbai and Bengaluru, green buildings not only rely on renewable resources such as solar power, water and wind to minimise the demand for conventional sources, but also maximise their use through the reuse and recycling of such resource.

Energy efficient products are those that have been certified by the BEE. But other certifications also exist, such as Greenpro (a product certification by IGBC to guarantee that the product is environment friendly) for indigenous products. The latter cover a range of building materials such as paints, cement, tiles, chemicals, and lighting systems, and a comprehensive list with contact information exists on the Greenpro website.

There are many energy conservation techniques with zero investment, like managing the operation time of ventilation units. Enhancing thermal insulation is a viable alternative not only during the planning phase, but also for retrofitting. With the prime energy consumption entity being heating, ventilation and air conditioning (HVAC), there is a need to study the existing HVAC efficiency booster technologies and recommend feasible ones depending on the type of building. The replacement of fluorescent and incandescent lamps by LEDs and the incorporation of occupancy sensors, to limit the intensity of lighting are also smart choices.

As per the Green Building Research Institute in the US, the top 10 green building trends in 2019 were:

The year 2019 also saw a massive rise in the use and experimentation of alternative building materials and construction techniques, and this is expected to further increase in 2020 as building professionals become better acquainted with the properties and benefits of different eco-friendly building materials. According to a survey by Sell House Fast, which included 582 architects, engineers and construction professionals, it is believed that the use of bamboo will see the greatest increase in 2020. While 74 per cent of the sample group said that this lightweight alternative will be seen more frequently within the property industry this year, 69 per cent expect straw bales to have a strong inclusion, followed by timbercrete (61 per cent). Meanwhile, only 44 per cent think hempcrete (made from hemp fibre, water and lime) will be widely used and cork (made from the tree bark of cork oak) even less so at 38 per cent.

Cooling represents one-fifth of the total electricity consumed in buildings today, or 10 per cent of the global electricity consumption, and demand is expected to triple by 2050. Even though efficient cooling technologies are available, deployment has been limited due to high upfront cost, and the reluctance and distrust on energy savings. Thus India’s target to reduce its cooling loads is an important point in the India Cooling Action Plan (ICAP), released in March 2019.

Internationally, cooling-as-a-service (CaaS) is emerging as a solution to scale up efficient and clean cooling systems in buildings. The World Green Building Council (WorldGBC) and the Basel Agency for Sustainable Energy (BASE) have joined hands to mainstream the CaaS business model in several countries, including India.

CaaS is a pay-per-service model for clean cooling systems. It eliminates upfront investment in clean cooling technology for customers who simply pay for the amount of air conditioning used, thus strengthening incentives for efficient consumption. The technology provider remains the owner of the cooling system, maintains it, and covers all operational costs including electricity, which incentivises the provider to install and maintain the most efficient equipment. CaaS also encourages manufacturers of cooling technology to design for reuse rather than obsolescence.

The National Housing Bank (NHB), India’s state-owned financial institution for housing, has projected that the real estate sector is expected to surpass $150 billion by 2020, building on initiatives such as the Smart Cities Mission. A significant part of the real estate market is going to be the green building sector. As per industry estimates, the green building market in the country is projected to be in the range of $30 billion-$40 billion. The new high-rise complexes for residential use, community use and mixed-use development are expected to form the top three sectors for green building growth in India in the coming years.

During the 10th Annual World Green Building Week, held in September 2019 in London, the WorldGBC issued a bold new vision for how buildings and infrastructure around the world can reach 40 per cent less embodied carbon emissions by 2030, and achieve 100 per cent net-zero-emission buildings by 2050.

Together, building and construction are responsible for 39 per cent of all carbon emissions in the world, with operational emissions (from energy used to heat, cool and light buildings) accounting for 28 per cent. The remaining 11 per cent comes from embodied carbon emissions, or “upfront” carbon that is associated with materials and construction processes throughout the whole building life cycle. The WorldGBC’s vision to fully decarbonise the sector requires eliminating both operational and embodied carbon emissions.

Approaches such as maximising the use of existing assets, promoting renovation instead of demolition and seeking new circular business models that reduce reliance on carbon-intensive raw materials are also needed. New national and sectoral roadmaps need to be developed, such as those in Finland, Norway and Sweden, with strong support from industry and policymakers. Case studies of existing best practices need to be replicated.

Despite the encouraging progress so far, there are miles to go. To begin with, in India, the three primary rating systems – GRIHA, LEED (a US-based rating system) and BEE’s ECBC – should be made consistent for better understanding as well as acceptability within the country.

Further, initiatives can be taken to engage public and private sector innovators to develop, test and scale up “green” and energy efficiency solutions, involving new financial models and promoting better approaches for the integration of distributed energy systems at a building/ community level.

The notion of green buildings is still new in India. As the market grows, there will be demand for architects, technicians, energy experts, environmentalists, consultants, etc. The IGBC and GRIHA have already started “building” such professionals. The Green Building Certification Institute has collaborated with Amity University to teach the basics of constructing and maintaining buildings in an eco-friendly manner. But several more such initiatives are required.

Last but not least, regular “green” audits are best strategies for optimising energy and water consumption in buildings, and prioritising the necessary measures to reduce the costs of operation. Advancing energy efficiency in buildings across Indian cities is critical for saving energy, increasing energy access, and combating pollution. In this regard, green buildings, that are designed to use less water, improve energy efficiency, conserve natural resources and provide healthier spaces will play a crucial role in addressing environmental issues and concerns.