Tata Power Company Limited is India’s largest integrated power company with a presence across the entire power value chain – generation, transmission and distribution, trading, and coal and freight logistics. The over 103-year-old company, which has been responsible for the commissioning of the country’s first ultra mega power project (UMPP) and the turnaround of distribution operations in Delhi, is working on a number of initiatives across all businesses.

Tata Power, together with its subsidiaries and jointly controlled entities, has an installed capacity of 12.9 GW, of which 68 per cent is based on thermal (coal, oil and gas) and the remaining is based on renewables (solar, wind, hydro and waste heat recovery). Last year, it expanded its conventional power generation capacity via the inorganic route with the acquisition of a 75 per cent stake in the stressed 1,980 MW Prayagraj power project. Meanwhile, it is expanding its renewable energy portfolio (currently at more than 3.9 GW) with a strong pipeline of projects based on green energy sources. The company is also reportedly planning to create an InvIT for its wind and solar farms and is in discussion with global investors.

The company also has successful public-private partnerships in the transmission and distribution (T&D) segment. Tata Power’s transmission network includes transmission lines of around 3,516 ckt. km. The company serves over 2.6 million distribution consumers in India through distribution licences and franchises in Mumbai, Delhi and Ajmer (Rajasthan). In 2019, it won the bid for the acquisition of 51 per cent stake in Central Electric Supply Undertaking (CESU) of Odisha. This has doubled its total consumer base to over 5 million. Tata Power is also working on expanding its presence in new and emerging areas like electric vehicle (EV) infrastructure and microgrids. 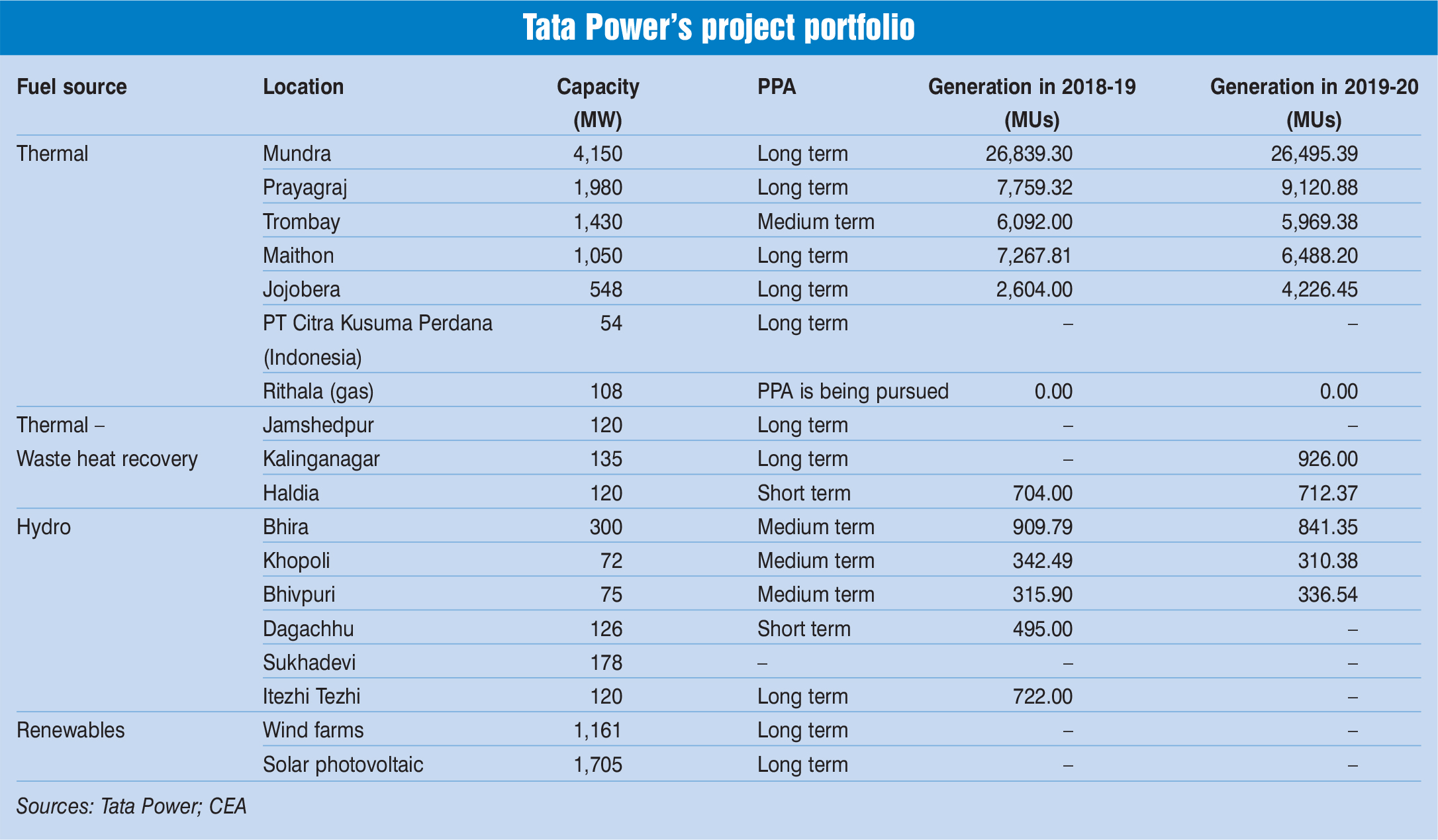 Tata Power’s own thermal portfolio aggregates 8.86 GW across Jharkhand, West Bengal, Odisha, Gujarat, Maharashtra and New Delhi. Much of the capacity comes from the 4,150 MW Mundra UMPP in Gujarat commissioned in 2012-13. The project was won through the tariff-based competitive bidding route in 2006 at a levellised tariff of Rs 2.26 per kWh.

Since coal for the plant is imported primarily from Indonesia, the Indonesian government’s decision in 2010 to change the mining law to bring coal price at par with the international market adversely impacted the company. It led to the under-recovery of costs for the Mundra UMPP and the erosion of Tata Power’s net worth by over Rs 38 billion in the following three years (2013-14 to 2015-16). Following a series of petitions/litigations at the Central Electricity Regulatory Commission (CERC), the APTEL and the Supreme Court, as well as the Gujarat government’s intervention through a high-powered committee, tariff relief (via fuel cost pass-through) was recommended for the Mundra UMPP in 2018-19. However, the beneficiary states (Gujarat, Haryana, Rajasthan, Punjab and Maharashtra) failed to reach a consensus on the tariff and Tata Power decided to stop operating the plant after February 2020, following which the Ministry of Power intervened to resolve the issue. The project has restarted operations given the current Covid-19 situation.

The other thermal projects include Trombay (930 MW), Maithon (1,050 MW), Jojobera (548 MW) and Rithala (108 MW). Tata Power also operates 54 MW of captive TPPs in Indonesia (PT Citra KusumaPerdana). Further, through the Resurgent Power platform, a joint venture (JV) of Tata Power International, ICICI Bank and global investors like the Kuwait Investment Authority and the State General Reserve Fund, Oman), Tata Power has acquired the 1,980 MW coal-based Bina power plant from the Prayagraj Power Generation Company, a part of Jaypee Power. Almost 90 per cent of the project’s gross capacity is tied up with Uttar Pradesh discoms through a Case II PPA. In April 2020, the plant’s availability was 90 per cent, as compared to 50 per cent at the time of acquisition in December 2019.

Tata Power’s green portfolio stands at 4,112 MW as of May 2020. It comprises solar (1,705 MW), wind (1,161 MW), hydro (871 MW), and waste heat recovery (375 MW). Recently, Tata Power’s JV with Norway’s Clean Energy Invest (CEI) and the International Financial Corporation started commercial operations of the 178 MW Shuakhevi hydropower project in Georgia in March 2020. This is one of the largest projects in Georgia set up at an overall cost of about $500 million. Tata Power has an installed hydropower capacity of approximately 500 MW across three plants in Maharashtra.

Meanwhile, Tata Power’s solar EPC business has recorded significant growth. As of January 2020, it had an order book of nearly Rs 77 billion, of which nearly Rs 44 billion came from outside the Tata Group. In January 2020, Tata Power Solar received an LoA from NTPC for a 250 MW solar project with domestic content under the CPSU scheme. 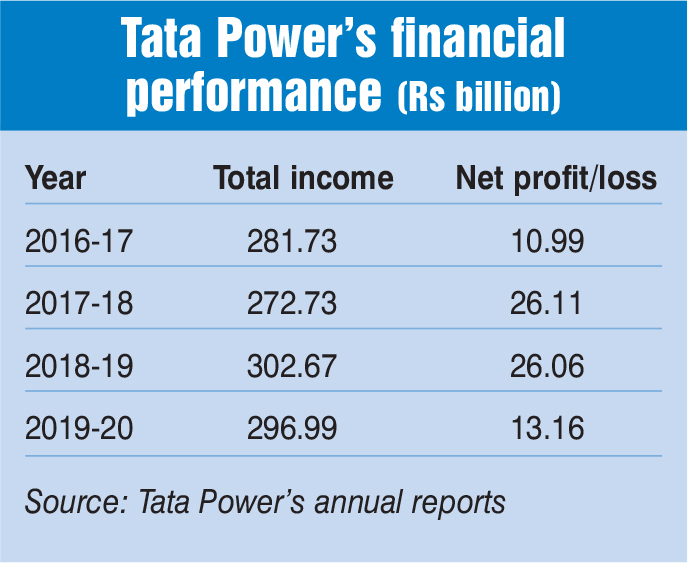 Tata Power’s distribution segment caters to around 2.59 million customers across the Mumbai and Delhi distribution licence areas and the Ajmer distribution franchise area. The distribution line length in the Delhi licence area is about 15,081 ckt. km while that in Mumbai and Ajmer stands at 4,500 ckt. km and 2,130 ckt. km respectively. For 2018-19, the aggregate technical and commercial (AT&C) losses in these areas were among the lowest in the country with Delhi at 8.16 per cent, Mumbai at 1.02 per cent (T&D loss) and Ajmer at 11.2 per cent. The company has demonstrated a successful track record of AT&C loss reduction and efficient delivery of consumer services in its areas of operation through the use of advanced technology and digitalisation. This has helped the company stay ahead in the current times when electricity bill payments are affected due to the lockdown. In a recent press note, PraveerSinha, CEO and MD, Tata Power, stated, “We, at Tata Power, have been quick to adapt to and adopt digital technologies, which have helped us evolve into a consumer-centric service provider. This digital evolution is coming in good stead during these trying times when all of us are at home with no option of getting out.”

In December 2019, Tata Power successfully secured the distribution licence for CESU from the Odisha Electricity Regulatory Commission (OERC) for 25 years. CESU serves five electrical circles – Bhubaneswar (electrical circles I and II), Cuttack, Paradip and Dhenkanal – covering an area of 29,354 square km. The sale of CESU’s distribution licence to Tata Power has been through the formation of a special purpose vehicle (SPV) at an estimated value of Rs 1.75 billion. The Odisha government will own a 49 per cent equity stake in the proposed SPV while Tata Power will hold the remaining 51 per cent stake along with management control. The company will be required to reduce AT&C losses from 30.5 per cent at present to 14 per cent over a 10-year period. Tata Power expects to undertake a capex of Rs 20 billion in the next three years in CESU’s area.

In 2018-19, the company raised about Rs 18.97 billion through disinvestment of non-core assets. Recently, in April 2020, Tata Power concluded the sale of its entire 50 per cent stake in South African JV Cennergi (Pty) Limited to Exxaro Resources Limited for ZAR 1,550 million. Cennergi was a 50:50 JV between Exxaro, a leading South African coal producer, and Khopoli Investments Limited, a wholly owned subsidiary of Tata Power.

Tata Power is also reportedly exploring to pare its debt by creating an InvIT for its renewable energy portfolio of wind and solar farms. Reportedly, global investors including Brookfield, Omers, Mubadala and the Abu Dhabi Investment Authority are in early-stage discussions with Tata Power to invest $500 million-$600 million in its renewable energy platform.

Covid impact and other challenges

Despite adversities, operations in all businesses have been largely unaffected owing to the ROTA system, adequate spares and remote operations. While there was no major backdown in renewable generation with the MNRE reiterating must-run status, energy sales of discoms were down by almost 29 per cent in April 2020 (versus April 2019). However, the demand started picking up in the first two weeks of May across all three licence areas. Also, the conventional generation business was unaffected in terms of plant availability though offtake reduced. Also, the company’s under-construction renewable projects were impacted in the first lockdown. However, work on sites and imports from China have started. The delays will be caught up in 2020-21. Also, CESU’s takeover has been deferred till a relaxation in the lockdown. Also, a part of its T&D capex planned for the first quarter has been deferred and will be covered in the third and fourth quarters of 2020-21.

The company faces challenges due to under-recoveries from the Mundra UMPP. Hopefully, with states reaching an agreement over the tariff issue, the supplementary PPAs will be signed soon. In addition, the licence for KPC mines in Indonesia, the fuel source for the UMPP, is set to expire in 2021. The renewal is under consideration. In addition, Tata Power’s high debt levels have negatively affected its financial performance. The company is consistently taking steps to reduce its debt by monetising non-core assets as well as evaluating options such as InvITs to bring on board new investors.

Going forward, Tata Power aims to minimise its thermal footprint and expand in renewables in a bid to become a carbon-friendly company. Its growth in the transmission business is linked to generation opportunities. The company also aims to expand in the distribution segment and become a leading player in this space.