The Indian power sector has, so far, witnessed the deployment of various reserves and ancillary services such as reserve regulation ancillary services, fast response ancillary services, pilot project on automatic generation control and pilot project on security constrained economic despatch at the national level. These have provided significant benefits to the overall stability of the system. Taking this a step forward, the Forum of Regulators recently released a report titled Intra-State Reserves and Ancillary Services for Balancing (SANTULAN). The report provides a roadmap and recommendations for the implementation of reserves and ancillary services at the intra-state level based on international and national experience. The key recommendations include establishing a robust framework at the state load despatchcentre (SLDC) level for scheduling, metering, accounting and settlement purposes; equipping SLDCs with enabling IT infrastructure and adequate human resources as outlined in the Capacity Building of Indian Load DespatchCentres (CABIL) report; and notifying the norms for minimum turndown level, upper scheduling limit and the ramp rate for thermal power generating units. The report also includes a model regulation on intra-state essential reliability services that could be adapted by state electricity regulatory commissions (SERCs) while addressing the requirement in their respective states.

Part-loaded generators and distributed primary reserves: The margins available on part-loaded generating units are the spinning reserves to be actuated through different means (primary, secondary or tertiary). The spinning reserves would be created through periodic unit commitment, and no generating unit would be earmarked exclusively as spinning reserves. Meanwhile, with regard to primary reserves, it is desirable to have these over a large number of units instead of maintaining these across a few units. This would ensure better availability of primary response, and avoid a large variation in the power flow across the network. The primary reserve for automatic primary response would be maintained in all coal-based units of capacity 200 MW and above, all gas turbines of capacity 50 MW and above, and all hydro units of capacity 25 MW and above. All the units on bar would respond as per their droop characteristics to stabilise the frequency post contingency.

Prerequisites for implementation of essential reliability services: The report outlines the prerequisites for implementation of intra-state essential reliability services. These are notification of norms for minimum turndown level, upper scheduling limit and ramp rate; a priori  knowledge of variable charges of intra-state generators; a robust SAMAST system and an intra-state deviation settlement system; adequate human resources and IT infrastructure at the SLDCs in line with the CABIL report; and the creation of a non-zero and surplus regulatory pool (by design) for the deviation settlement pool to take care of default in payments and maintain cash flow.

Dimensioning of secondary and tertiary reserves: The requirement of reserves would depend on forecast errors, credible contingencies, scheduling interval and ramping constraints. The report suggests that the reserve requirement would be assessed periodically with the help of a suitable probabilistic method based on historical area control errors (ACEs). Such errors measure the imbalance of the state control area at the state periphery (jurisdiction boundary). Efforts would be made to maintain the reserves through unit commitment over a rolling window.

Gradually, the reserve requirement would be reduced through measures such as the improvement of load forecast, reduction in frequency of plant outages and improved intra-day market liquidity allowing better portfolio management.

Computation and monitoring of available reserves: The reserves available in real time shall be computed as under:

The despatchable reserves shall be limited by the maximum station ramp rate. Meanwhile, the tertiary reserves of a state in the interstate generating stations ISGSs shall be computed separately with reference to the entitlement of that state in the concerned ISGS. 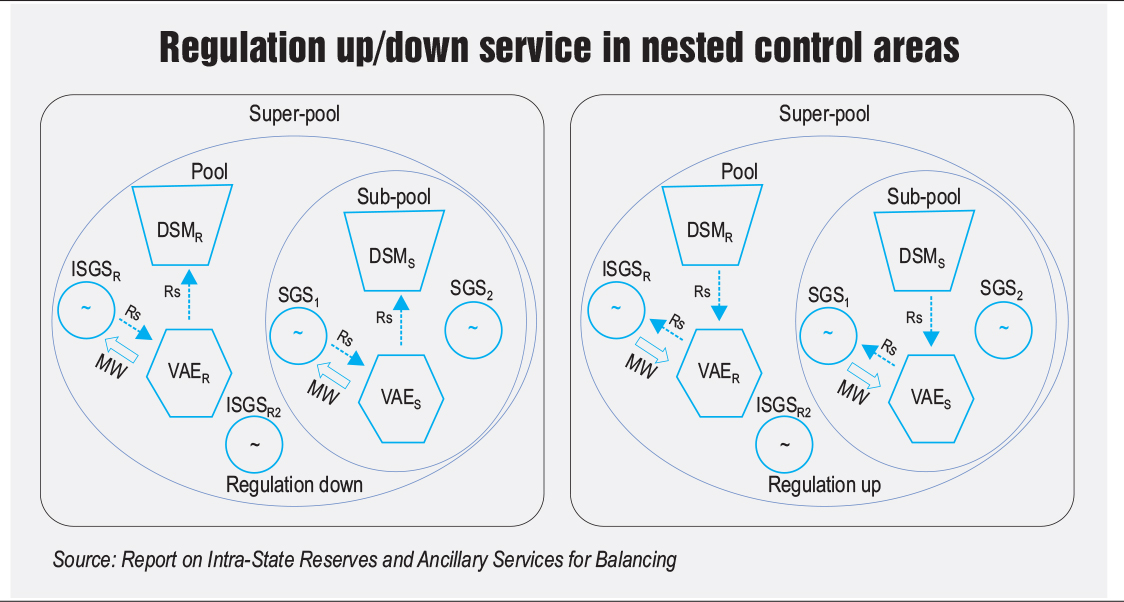 Despatch of reserves: Merit order stack (based on the energy charge rate) of available reserves would be prepared by SLDCs. The decision regarding the quantum of reserves to be despatched shall be taken based on factors such as the trend of ACE, ramping capability of the available vis-à-vis observed ramp rate in the net load, and congestion management. The adoption of an algorithmic approach for co-optimising energy and reserves is desirable to minimise the total production cost.

Creation of virtual ancillary entity: A virtual ancillary entity (VAE) would be created within the intra-state scheduling application to convert single entry. The VAE would be a member of the intra-state deviation pool. It would act as the counterparty for the schedule prepared for the despatch of reserves by ancillary services. Reserves shall be despatched by ancillary service providers to the pool (or vice versa) without disturbing the underlying power purchase agreements and requisitions.

While for regulation up service, power shall be scheduled from the generating station to the virtual ancillary entity, for regulation-down service, power shall be scheduled from the virtual ancillary entity to the generating station. The scheduling of reserves through VAE would allow the scheduling of reserves without unsettling the existing contracts. It would also establish a double-entry system in the despatch of reserves, and enable check and balances in the mechanism.

Information and communication technology infrastructure: Assessment, visualisation and despatch of reserves shall be through a robust and versatile optimisation algorithm. A reliable and path redundant communication channel shall be provided to ensure the delivery of despatch instructions to ancillary service providers in electronic form. In addition, the reserves despatch shall be posted transparently on the SLDC website for ease of access of concerned stakeholders.

Others: The report states that the incentives to essential reliability service providers could be provided through suitable mechanisms for compensating and incentivising various flexibility services (ramping, reserve regulation, peaking, etc.). Furthermore, suitable initiatives for capacity building in the form of market simulation, optimisation techniques, harnessing of flexibility attributes, reserve assessment and ancillary service shall be taken up in collaboration with industry experts, academia and the Forum of Load Despatchers.

To conclude, the implementation of reserves and ancillary services at the intra-state level could go a long way in ensuring uninterrupted, quality and economic power supply in the country. Besides, it would also help in maintaining a stable and robust power grid. This has become all the more important with the increasing penetration of intermittent and variable renewable energy into the grid.