Coal-based power is the mainstay of the Indian power sector. With a share of 55 per cent in the installed capacity and 70 per cent in electricity generation, coal-based power plays a crucial role in meeting the power demand in the country. However, coal-based capacity addition has declined in recent years mainly owing to the rapid growth and competitive tariffs of renewable power, and also due to the lack of long-term power purchase agreements (PPAs) by discoms. As a result, capacity utilisation at the existing thermal power plants (TPPs) has declined and a considerable amount of under-construction capacity is under stress. The ongoing Covid-19 crisis and the lockdown in its wake have, moreover, led to a reduction in power demand across the country, exacerbating the stress in the segment.

The coal-based capacity addition has declined from a peak of about 18.5 GW in 2011-12 to just 4.4 GW in 2019-20, the lowest in a decade. Ample private participation led by delicensing of generation by the Electricity Act, 2003 resulted in a spurt in capacity addition in the initial years of the decade. However, in the past five years or so, the capital cost of renewable energy technologies, especially solar photovoltaic (PV) has declined considerably and the central government, being a signatory to the Paris Agreement 2016, has actively encouraged renewable energy. Meanwhile, solar energy tariffs have declined to below Rs 3 per kWh, giving stiff competition to coal-based power, whose tariffs stand at Rs 3.38 per unit (NTPC’s average coal-based tariff for 2018-19).

The plant load factor (PLF) of coal-based capacity has also declined as discoms back down power due to lack of demand as well as to accommodate renewable energy, which has a “must-run” status. The coal-based PLFs have declined from a peak of 73.6 per cent in 2011-12 to 55.98 per cent in 2019-20.

Stressed assets: There are about 40.1 GW of stressed assets worth Rs 2,366 billion in the thermal power sector (24.4 GW commissioned and 15.7 GW deemed under construction) as per the Parliamentary Standing Committee on Energy (as of March 2018). The causes of stress include lack of fuel linkage, lack of PPAs, inability of promoters to infuse liquidity, contractual and tariff-related disputes, cost overruns and over-aggressive tariff bidding by developers. So far, the resolution of stressed assets has been slow despite efforts by lenders and government. Only about 10 per cent of the 40 GW stressed capacity has achieved resolution, mainly through acquisition by a new sponsor, as per ICRA. The case in point includes Renascent Power’s acquisition of Jaypee Group’s 1,980 MW Bina TPP and Adani Power’s acquisition of Korba West. JSW Energy also decided to acquire GMR Kamalanga Energy Limited, which operates the 1,050 TPP in Odisha but the company has put the acquisition on hold, citing Covid-19 impact.

Emission norms update: The Ministry of Environment, Forest and Climate Change (MoEFCC) notified revised emission norms for TPPs in December 2015, which tightened the limits of sulphur oxide, nitrogen oxide (NOx) and particulate matter emissions. In order to comply with the norms, TPPs aggregating to 166 GW are required to retrofit with flue gas desulphurisation (FGD) systems and electrostatic precipitators. So far, FGD systems have been commissioned in only three private sector units aggregating 1,820 MW. However, tenders for installing FGDs have been issued for 63 per cent of the planned capacity, while bids have been awarded for 23.8 per cent. With regard to NOx emissions, many TPPs have started installing primary control systems for NOx reduction and around 50 per cent of the power plants already comply with the relevant NOx norms. Notably, the MOEFCC has, in principle, agreed to change the NOx norms for TPPs installed between January 1, 2004 and December 31, 2016 from 300 mg per Nm3 to 450 mg per Nm3. Further, the revision of the NOx norms for TPPs installed after January 1, 2017 is under consideration by the environment ministry. Also, recently the MoEFCC has issued a gazette notification to do away with the mandatory washing of coal for supply to TPPs.

Coal auction for TPPs without PPA: In December 2019, the Ministry of Power (MoP) notified a methodology for conducting coal auctions for TPPs without PPAs. The move is part of the Scheme for Harnessing and Allocating Koyla (Coal) Transparently in India and will help address the issues of stressed TPPs. The initiative will allow TPPs without PPAs to apply for coal linkages, provided the electricity produced from coal secured under the mechanism is sold through spot power exchanges or through the DEEP portal.

Power procurement under Pilot Scheme II: In February 2020, the power ministry concluded the second phase of the pilot scheme for procurement of 2.5 GW of power on a medium-term basis. Under this, 12 successful bidders received the letter of award for power supply at Rs 3.26 per unit. Earlier, the second phase of the pilot scheme, concluded in December 2019, was cancelled due to high discovered bid of Rs 4.41 per unit. 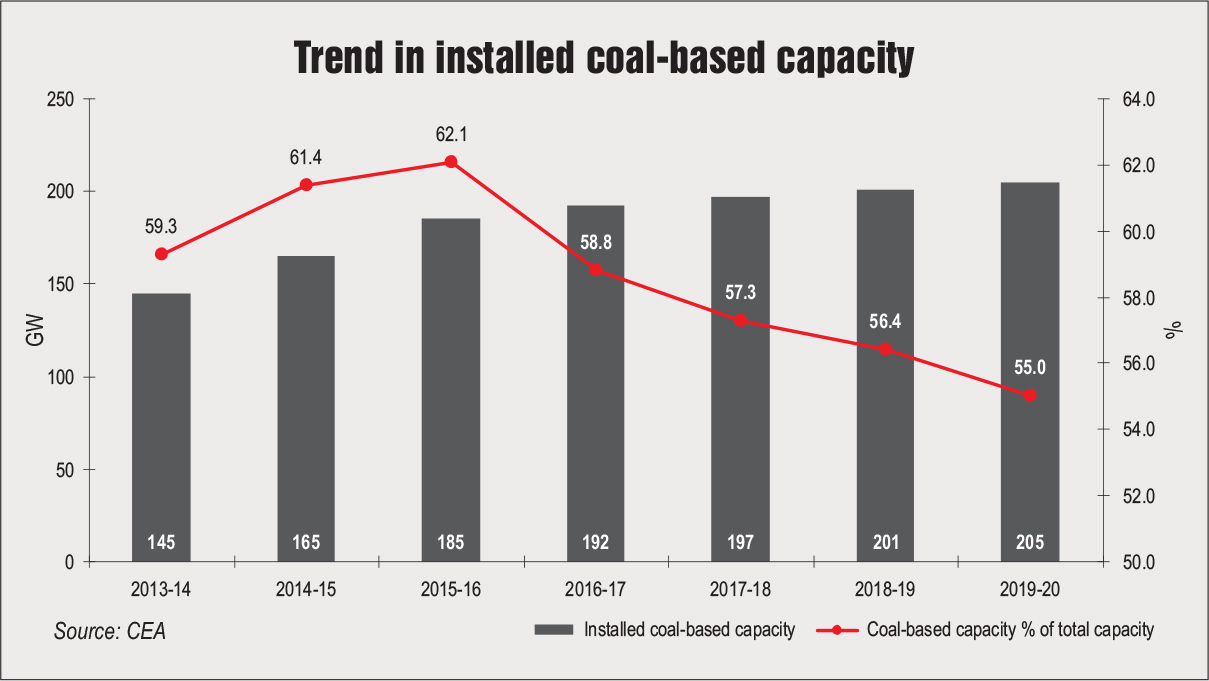 The government-imposed pan-India lockdown to control the Covid-19 pandemic has worsened the power sector’s woes, while it was already under immense stress. The lockdown has affected power demand, which has declined by 20-30 per cent since March 24, 2020 (when lockdown was announced) as industrial and commercial establishments remain shut. As a result, the PLF of TPPs declined from 60.11 per cent in February 2020 to 51.25 per cent in March 2020. The corresponding PLFs in March 2019 stood at 62.73 per cent. This has had a bearing on the overall PLF for the financial year 2020, which declined to 56.08 per cent from 60.3 per cent in the previous year. According to India Ratings and Research, PLFs could fall below 55 per cent for 2020-21, closer to the technical minimum standards. Further, the fall in demand has aggravated payment delays from discoms to gencos, which are already reeling under large payment dues of over Rs 920 billion as of February 2020. There have been cases of discoms invoking the force majeure clause against independent power producers and withholding payments. In order to prevent spiralling of the situation beyond control, the central government announced a Rs 900 billion liquidity infusion package in May 2020 for discoms to help them clear outstanding dues. Under the package, Power Finance Corporation Limited and REC Limited will provide loans to discoms against state government guarantees to enable them clear outstanding dues to transmission and generation firms. The government has also planned to waive off or defer fixed charges and interstate transmission charges by central public sector enterprises for the period from March 24-May 17, 2020.

In addition, owing to a decline in power demand due to the lockdown, TPPs currently have sufficient coal stocks and are, therefore, not lifting coal. Gencos’ payment to Coal India Limited has also been affected. The MoP has recently issued a letter to gencos to reduce coal imports and use domestic supplies as coal stocks are piling up at pitheads. Currently, imported coal is used by about 162 GW of coal-based capacity. While 144.6 GW of this capacity imports coal for blending with domestic coal, about 17.6 GW is designed to run exclusively on imported coal.

The pandemic induced lockdown has also significantly impacted under-construction TPPs, which will experience major cost and time overruns (of at least three months) due to stoppage of work at sites. An increase in interest during construction is expected to lead to a steep rise in the capital cost of projects and exert an upward pressure of tariffs as well. Further, the supply chain has been severely impacted as manufacturing operations remain shut worldwide. The effects are more pronounced for projects sourcing equipment from international markets such as China. As per the Central Electricity Authority (CEA), under-construction generation projects aggregating to over 15 GW are based on power equipment from Chinese manufacturers. Most of these are stalled projects from the private sector, while one each is in state and central sectors as well (NTPC’s Lara Super Thermal Power Plant (STPP) 800 MW Unit-II and Uttar Pradesh RajyaVidyutUtpadan Nigam Limited’s 1,320 MW Jawaharpur STPP. Similarly, the ongoing FGD works have been suspended at many projects as certain equipment is sourced from the US and China.

The coal-based generation segment is facing challenging times not only because of Covid-19 related disruptions and strong competition from renewables but also due to long-standing issues such as domestic coal shortages and lack of PPAs. The government’s recent move to open up the coal sector to commercial mining is likely to address the issue of fuel shortage, while the proposed reforms in distribution (under the Electricity Act, 2003) are expected to revive power procurement by discoms in the long run.

At present, the pipeline of under-construction coal-based TPPs stands at about 40 GW and the capacity addition in 2020-21 is expected to be subdued at about 5 GW. Going forward, coal-based capacity will be critical to meet the country’s energy demand despite the rapid growth of renewables, but it needs to embrace flexibilisation and implement emission controls to stay relevant in the future.