Hydropower plants offer flexible power generation, quick ramping capability and part-load operations. All this makes them ideal for maintaining grid stability. Notably, hydropower played a pivotal role in ensuring grid stability during the pan-India lights-off event on April 5, 2020. The reduction in all-India power demand of 12-14 GW during the event was managed chiefly through the ramping of hydropower generation. Apart from this, due to the growing renewable energy penetration, hydropower has assumed a critical role in grid balancing. In a significant boost for the hydropower segment, last year the much awaited national hydropower policy was announced, categorising large hydroelectric projects (HEPs) as renewable energy sources as well as incorporating separate hydropower obligation (HPO) targets.

The country’s installed hydropower capacity stood at 45,699 MW as of April 2020. Sector-wise, the majority of the hydropower capacity (59 per cent) is owned by the state sector, followed by the central and private sectors with share of 34 per cent and 7 per cent respectively. Hydropower capacity grew at a compound annual growth rate of about 1.7 per cent between 2015-16 and 2019-20; in comparison, coal-based capacity grew at 1.8 per cent and renewable energy capacity at nearly 22.3 per cent during this period. The annual hydropower capacity additions have also remained low. The year 2019-20 recorded a capacity addition of only 300 MW with NEEPCO commissioning two 150 MW units at the Kameng HEP in Arunachal Pradesh in February 2020.  Hydropower plants produced 155,769 MUs of electricity during 2019-20, an increase of 15 per cent over the previous year due to an extended monsoon season. However, the share of hydropower has declined from 9 per cent in 2015-16 to 8 per cent in 2019-20 due to the increase in renewable power generation.

In March 2019, the cabinet approved a slew of measures for the hydropower segment, including the decision to give renewable energy status to large hydropower projects. Earlier, only hydropower projects of up to 25 MW capacity were considered as renewables and were eligible for incentives such as financial assistance and cheaper credit. Also, as per new measures, HPOs have been identified as a separate entity within the non-solar renewable purchase obligation category. The Ministry of Power (MoP) has finalised the HPO trajectory up to 2030 and is likely to release it soon. It would then be notified by state regulators.

In addition, tariff rationalisation measures have been introduced to provide flexibility to developers to determine tariffs by backloading them after increasing the project life to 40 years, increasing the debt repayment period to 18 years and introducing an escalating tariff of 2 per cent. Further, budgetary support has been provided for funding the flood moderation component of HEPs on a case-by-case basis. Budgetary support will be provided for funding the cost of enabling infrastructure such as roads and bridges, with a limit of Rs 15 million per MW for projects up to 200 MW and of Rs 10 million per MW for projects above 200 MW. The guidelines for accessing the central grant for enabling infrastructure and flood moderation are at final stage and would be announced soon. In another key development, in October 2019, NHPC started the construction work at the 2,000 MW Lower Subansiri HEP located on the border of Assam and Arunachal Pradesh, after receiving approval from the Assam government. The revised cost estimate of the project is Rs 194 billion. Apart from this, in July 2019, the Cabinet Committee on Economic Affairs (CCEA) approved NHPC Limited’s 2,880 MW Dibang multipurpose project in Arunachal Pradesh. The cost of the project is estimated at Rs 280.8 billion. The tenders for the project have been released. Once completed, this will be the largest HEP in the country. In addition to this, bids for the Teesta VI HEP are already out, construction at the Pakaldul HEP has commenced, and bids for the Kiru HEP have been evaluated. The MoP has moved the investment proposals for the 210 MW Luhri HEP and the 66 MW Dhaulasidh HEP in Himachal Pradesh for approval. Another positive development in the hydropower sector is that various states have come forward to promote investments in the sector on the MoP’s advice. Recently, Himachal Pradesh allotted 11 projects to various central public sector undertakings including SJVN Limited, NTPC Limited and NHPC Limited. The Himachal Pradesh government has also agreed to reduce/waive its free power entitlement (of 12 per cent) and its share of GST to bring down the cost of generation from such projects and make it affordable for consumers. The projected tariff for these projects is about Rs 4.50 per unit. Jammu & Kashmir has also waived the free power obligation and water cess for the Kiru and Ratle projects. 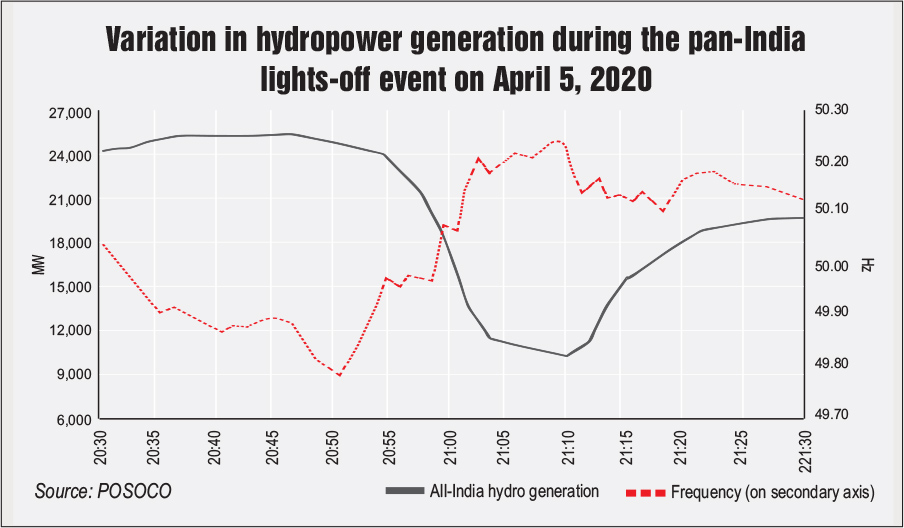 Hydropower generation is flexible in nature and offers quick ramping capabilities. This makes it suitable for maintaining grid stability, and is being utilised for managing power demand and supply mismatch. Hydropower plants played a key role in maintaining grid stability at the time of the pan-India lights-off event on April 5, 2020 at 9 p.m. for 9 minutes, following an appeal by the prime minister to show solidarity with healthcare workers in fighting the Covid pandemic. In order to manage the event, hydropower generation across the country was maximised by 8:45 p.m., and generation reduction of 17,543 MW (from 25,559 MW to 8,016 MW) was achieved with these resources between 8:45 p.m. and 9:10 p.m. (matching with the demand reduction of 31,089 MW during the same period). Hydropower generation was again ramped up from 8,016 MW to 19,012 MW from 9:10 p.m. to 9:27 p.m. to meet the increase in power demand after the event. In order to utilise the hydropower for maintaining grid stability, all the modalities were worked out beforehand, and the plants to be ramped up and down were identified. Mock exercises were undertaken to ensure smooth operations. During the event, hydropower plants operated at 0-10 per cent load, and were later on ramped up to their full loads as per schedule. Hydropower plants of various types such as storage, run-of-River (RoR), RoR with pondage, and pumped storage were utilised for managing the variation in power demand. In another incident, during the solar eclipse on December 26, 2019, the importance of hydropower generation for grid balancing was demonstrated. During the eclipse, the decline in solar power generation was compensated by hydropower and gas generation in the northern and western regions. All interstate hydropower generators ramped up their generation based on real-time frequency. During the eclipse, around 6,000 MW of variation in hydropower generation was recorded. Undoubtedly, hydropower plants play a crucial role in grid balancing, and in order to study the same the Central Electricity Regulatory Commission implemented fast response ancillary services (FRAS) across central sector HEPs on a pilot basis from November 26, 2018 to May 31, 2019. FRAS was implemented in 20 HEPs totalling 8,624 MW with pondage/storage facilities. During the study, around 45 FRAS up, 423 FRAS down, and 1,143 inverse or counter instructions were issued. As per the report of Power System Operation Corporation Limited, FRAS helped in handling the sudden change in frequency in a centralised manner, thereby acting as a vital tool for system operators to handle imbalances at the national level. After the implementation of FRAS, the number of frequency excursions above 50 Hz and below 49.7 Hz also reduced. The implementation of FRAS helped in better ramp management and real-time congestion management. The MoP has requested the World Bank to commission a study to assess the flexibility of hydropower and how it can be unlocked through appropriate market and regulatory frameworks. The World Bank is likely to award this study soon. Notably, pumped storage hydroelectric plants are being recognised as one of the largest forms of power storage available at a competitive cost. Pumped storage is a mature and dependable technology, and offers loading ramp rates as fast as, or even faster than, typical gas-based plants. Going forward, the MoP is likely to devise a policy for pumped storage plants. 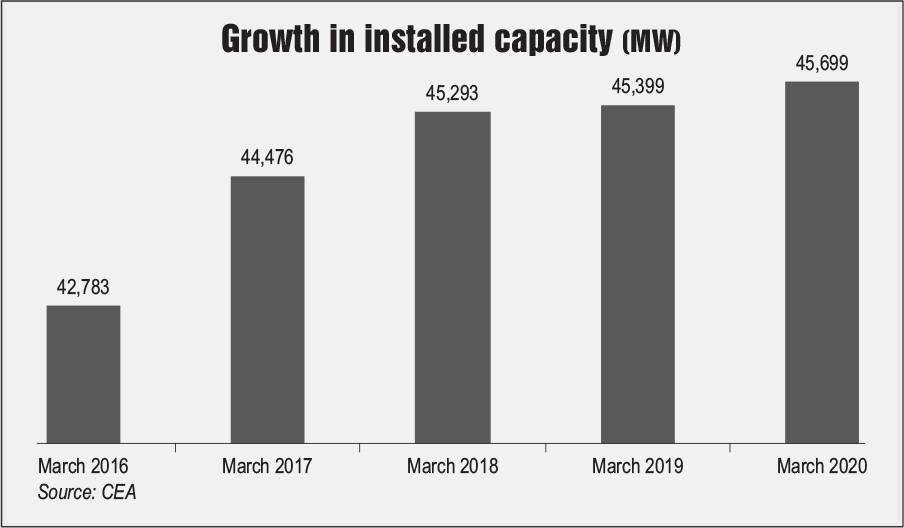 As of March 2020, 36 HEPs (above 25 MW) totalling 12,973 MW were under construction. Of the total capacity, 8,389 MW is being developed by the central sector, 2,713 MW by the state sector, and 1,872 MW by the private sector. These projects are expected to be commissioned by 2024-25. Of the projects under construction, 27 HEPs totalling 10,767 MW in capacity are facing no major constraints while 11 HEPs totalling 2,206 MW are having major difficulties or have been stalled. Around 35 under-construction HEPs are facing time and cost overruns. Apart from this, around 10 HEPs aggregating 8,000 MW in capacity are in the pipeline and are expected to commence construction in the next six to eight months. These projects entail an investment of around Rs 800 billion. In the pumped storage space, three plants of 1,205 MW capacity are currently under construction. As per the CEA’s Optimal Generation Capacity Mix, the installed hydropower capacity is estimated to reach 73 GW (including 5,000 MW of small hydro and 4,356 MW of hydropower imports) by 2029-30, contributing to nearly 8 per cent of the total power generation.

Overall, flexible operations are expected to be one of the key focus areas in the development of hydropower projects. Hydropower would play a critical role in adjusting demand-supply mismatch, especially in view of the large-scale renewable energy integration expected in the coming years. Some of the desired policy and regulatory initiatives that could go a long way in promoting flexible hydropower operations are incentivising hydropower projects for peaking availability, tariff regulations to encourage inflow forecasting and silt level forecasting, provisions to obtain adequate response from intra-state hydropower stations, and a multi-part tariff structure to factor in flexibility services rendered by HEPs.