The country is moving towards its target of 175 GW of renewable energy by 2022 and 450 GW by 2030, and the availability of flexible resources is key to the grid integration of this capacity. Thus, it is important to leverage the flexibility of existing resources and invest in new flexible resources.

Coal-based thermal generation dominates the Indian power system. Thus, coal-based thermal power plants (TPPs) are expected to play a major role in delivering flexibility. Traditionally, TPPs generated baseload power. With time, they have adapted to rapid changes in the power system and transformed their role to a dynamic generation resource. In this regard, in May 2020, Power System Operation Corporation Limited (POSOCO) came out with a report on “Flexibility Analysis of Thermal Generation for Renewable Integration in India”.

The report is based on a data-intensive exercise covering 438 coal-based power units for an eight-year period and analyses their minimum turndown levels and other flexibility metrics. The analysis reveals that on an all-India basis, 60 per cent of units have provided flexibility in the range of 20-30 per cent of installed capacity.

A look at the key findings of the report…

The Indian power system has witnessed rapid changes in the past decade, the country has progressed from meeting 94 GW demand in 2008-09 to 182 GW in 2019-20. During the same time, large-scale renewable energy has been integrated. The installed capacity has grown from 15 GW in April 2009 to 87 GW in March 2020. This growth has increased the need for flexible resources that can meet the dynamic requirements of the power system.

The thermal power generating units have seen a fast-paced growth in the past decade, from a capacity of 55 GW in 2009 to 138 GW in 2020. The generation fleet has aligned itself to the diurnal and seasonal diversity of different regions in the country. The average day-wise flexibility of thermal generation has increased from 8-10 per cent in 2009 to 15-28 per cent in 2020. The average daily thermal generation is in the range of 20-30 GW. The difference between maximum demand and minimum demand in a day, that is, the daily flexibility requirement of the Indian power system, is growing at a rapid pace. The day-wise flexibility requirement is increasing at the rate of 5-7 GW per annum. This reached a maximum of 56 GW during the winter of 2019-20.

The flexibility requirement will increase with further renewable energy integration. The Central Electricity Authority’s report on the “Flexible Operation of Thermal Power Plants for the Integration of Renewable Generation” estimates that coal generation needs an intra-day maximum flexing of 84 GW by 2021-22. The flexibilisation of thermal generation will play a critical role in achieving the government’s clean energy commitment.

In POSOCO’s report, SCADA data available with various regional load despatchcentres has been used for analysis. The 15-minute time block-wise average generation of thermal units was collected for the period April 1, 2011 to March 31, 2018, or from the date of commercial operation of the respective units to March 31, 2018, whichever is earlier. The report analyses the data of all interstate generating station (ISGS) units and state generating station (SGS) units with a capacity of 200 MW and above.

The performance of 438 thermal generating units was analysed and graded after a data-intensive exercise of analysing about 60 million time blocks. The parameters considered for analysis are average flexibility, percentage of days maximum/minimum generation achieved, normalised average/maximum/minimum generation. A generating unit was considered for analysis on days when the average generation was greater than 30 per cent of the installed capacity. Generation less than 30 per cent of installed capacity in a particular time block was not considered. Thus, generation during the synchronisation and shutdown process has been eliminated in the analysis. 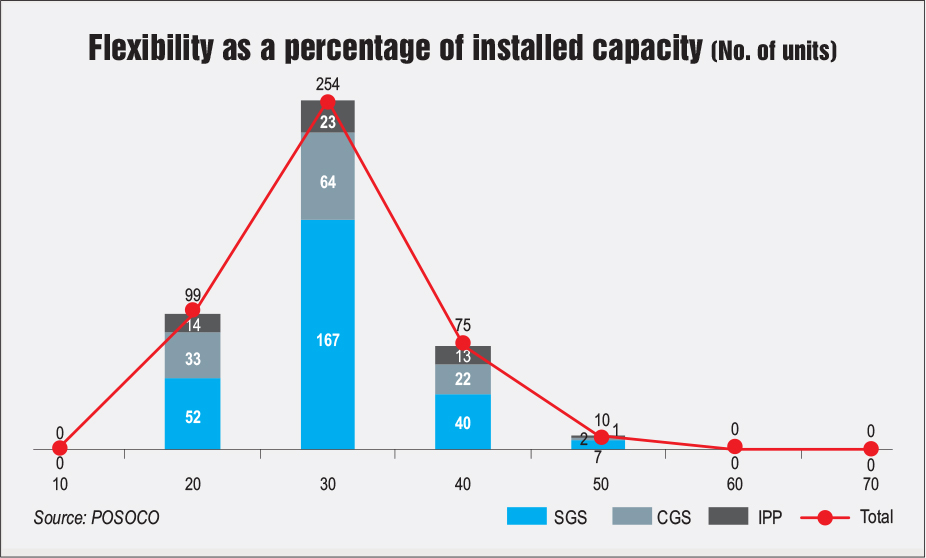 Flexibility: The analysis of the data has revealed that the majority of the coal-based stations in the country are flexing their generation in the range of 20-30 per cent of their installed capacity. On an all-India basis, about 60 per cent are providing flexibility in the range of 20-30 per cent. The majority of these are central generating stations (CGSs) and units with a capacity 500 MW and above.

About 50 per cent of units in the independent power producer (IPP)-ISGS category are providing flexibility in the range of 20-30 per cent of installed capacity. At the national level, there are only 20 per cent of units flexing their generation above 30 per cent of the installed capacity. The introduction of 55 per cent technical minimum at the central level by the CERC has played a major role in achieving better flexibility. If the minimum operational level of state-controlled thermal generating stations is also reduced, greater flexibility would be achieved, enabling higher renewable energy integration.

Following the CERC’s introduction of the security constrained economic despatch pilot for ISGS in April 1, 2019, cost optimisation is being carried out at the national level. The total variable cost has been minimised due to constraints including the dual value of each plant. The dual value measures the increase in the cost of the objective function per unit increase in the value of the variable. The dual variables for ramp up, ramp down, Pmax and Pmin were also analysed for 26,400 15-minute time blocks during the period April-December, 2019. It was found that reducing the technical minimum turndown level from the present 55 per cent DC on bar to a lower value, at least for all higher variable cost plants, can be a positive technological intervention. Some of the higher variable plants have also been made to go into reserve shutdown for a significant duration during the pilot. Despite the increasing renewable penetration in India, low variable cost TPPs may still achieve a higher plant load factor. Mid-merit power plants are required to do more ramp-up and ramp-down duty. Thus, investing in these plants can help reduce cost.

In conclusion, POSOCO notes that all power systems have some inherent level of flexibility, designed to accommodate variable and uncertain load, and contingencies related to network and conventional power plant outages. A detailed evaluation becomes more critical as renewable energy penetration levels increase. Thus, many of the tools to assess flexibility, such as spinning reserves, ancillary services, automatic generation control, and short despatch intervals, are being progressively introduced in Indian power system operation.

The CERC has taken key initiatives like reducing the technical minimum to 55 per cent and mandating 1 per cent ramp rates, to improve flexibility in the Indian power system. In order to integrate the ever-increasing levels of renewable energy, the regulatory framework at the inter- and intra-state level has to be amended in line with global standards in terms of minimum operational levels of generation, two shifting operations, etc. Further, suitable incentives need to be introduced and technological upgradation of units should be encouraged for achieving a higher level of flexibility.