The Indian power sector achieved a milestone on June 1, 2020, with the introduction of the real-time market (RTM) for electricity trading. The RTM platform provides buyers and sellers an organised platform for power trading just an hour before delivery, enabling discoms and industrial open access users to better manage their demand while allowing gencos to sell unexpected surplus power. Till now, electricity could be delivered through spot contracts on the same day, next day, or on a weekly basis. At the launch ceremony, R.K. Singh, the power minister, remarked that this development has placed the Indian electricity market amongst the league of the few electricity markets in the world that have a real-time market.

RTM is expected to bring in the required flexibility to provide real-time balance while ensuring the optimal utilisation of the available surplus capacity in the system. It will also help manage the varied demand pattern in the country in an organised manner at the national level. The National Load Despatch Centre (NLDC) is facilitating the automation required for RTM in coordination with the two power exchanges, the Indian Energy Exchange (IEX) and Power Exchange India Limited (PXIL).

RTM transactions will take place every 30 minutes in a day based on the double-sided closed auction and at a uniform price. Buyers and sellers can place buy and sell bids for each 15-minute time block. There are 48 auction sessions during the day and the power is delivered within one hour of closure of the bid session. The first bid session starts at 2245 hours. 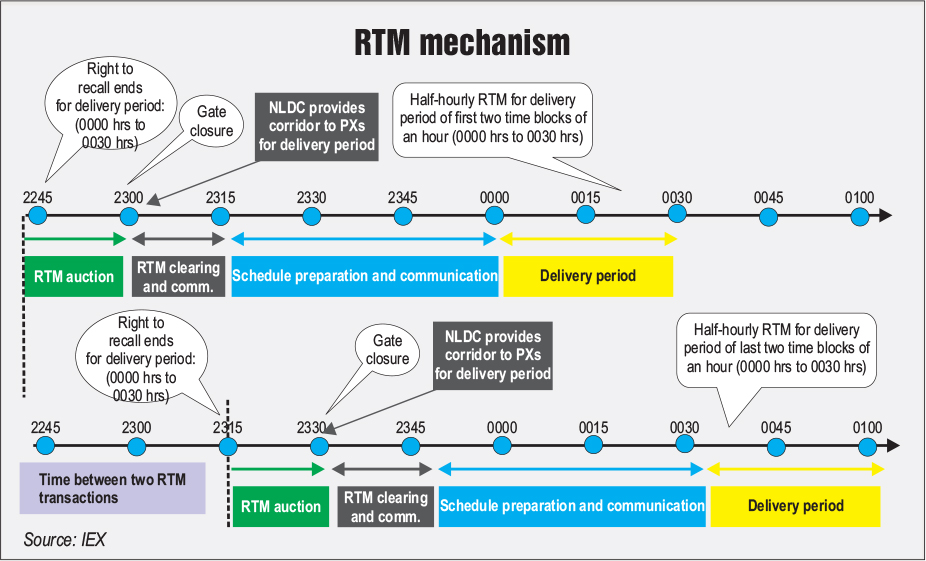 RTM is being implemented in line with the Central Electricity Regulatory Commission’s (CERC) framework issued in December 2019. The commission has stipulated the methodology for the allocation of the transmission corridor between the power exchanges. It provides the guidelines for the real-time scheduling of collective transactions at the power exchanges.

Notably, the concept of gate closure has been introduced in the RTM to ensure firmness in schedules during market operation hours. Gate closure is the time at which participants in a wholesale electricity market submit their final bids and offers. After gate closure, forward-looking data, such as physical information and contract volumes for the predetermined delivery period, are frozen and the system operator takes over the responsibility of balancing supply and demand through available reserves or ancillary services. 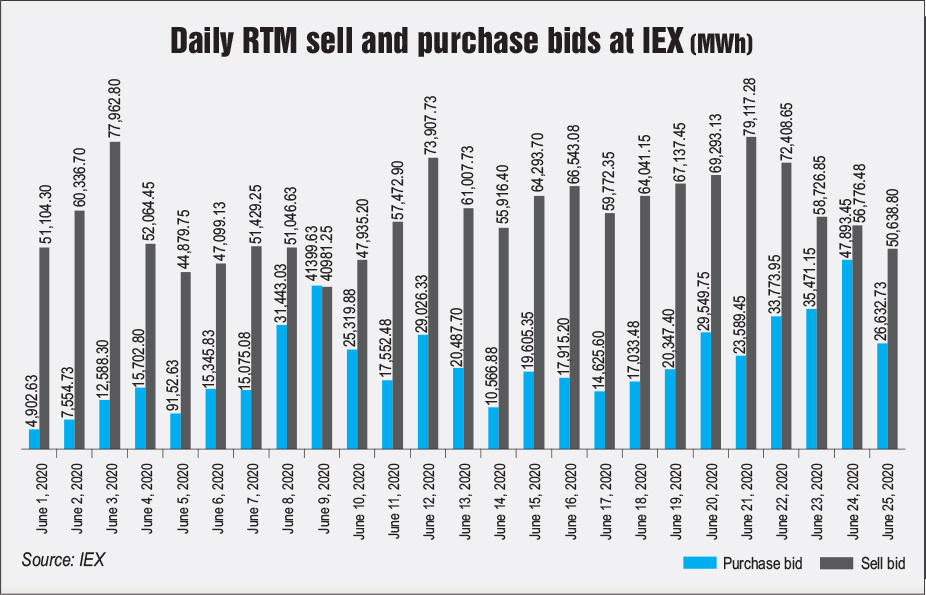 Discoms: Currently, discoms’ power procurement mix is dominated by long-term contracts, which account for 90 per cent of the total power procured while only 10 per cent power is procured through short-term transactions.

However, long-term PPAs come with the burden of fixed charges, which need to be paid by discoms even if they do not wish to purchase power owing to lower demand. A 25-year long-term PPA might have been the right approach two decades ago to bring in investments and provide certainty to investors. Today, however, the discoms are certainly not in a position to enter into such long-term PPAs given the changing dynamics of the sector and the availability of more competitive alternatives.

The RTM would enable discoms to optimise their power purchase portfolio and not tie up excess capacity. This will not only lead to an overall reduction in the power procurement cost, but also help discoms deal with exigencies like a sudden hike in load without resorting to power cuts. This is especially beneficial since the revised version of the Tariff Policy is likely to include penalties for load shedding or unscheduled power cuts. So far, discoms have resorted to the deviation settlement mechanism (DSM) for meeting their real-time needs, resulting in significant penalties. In addition, discoms can offer to sell power in the market in case of unrequisitioned surplus or last-minute changes in the load profile.

Rohit Bajaj, head, business development and senior vice president, IEX, says, “The commencement of the RTM has provided an avenue to distribution companies to meet their power demand in the most efficient way. Being near to the real time, the market aids the utilities in balancing their demand-supply and providing 24×7 power supply in a flexible and cost-competitive way. Until the commencement of the market, the financially stressed utilities had to opt for DSM for balancing real-time requirements, which resulted in huge financial penalties for them. The RTM, an endeavour by the CERC and the Ministry of Power, will greatly help the utilities to save on such penalties.”

According to SabyasachiMajumdar, group head and senior vice president – corporate ratings, ICRA Limited, “Considering a 50 paise per unit saving under RTM trading against DSM and assuming a 50 per cent transition in procurement from DSM to RTM in the near to medium term, the annual savings for discoms and open access consumers are estimated at Rs 5.5 billion.” 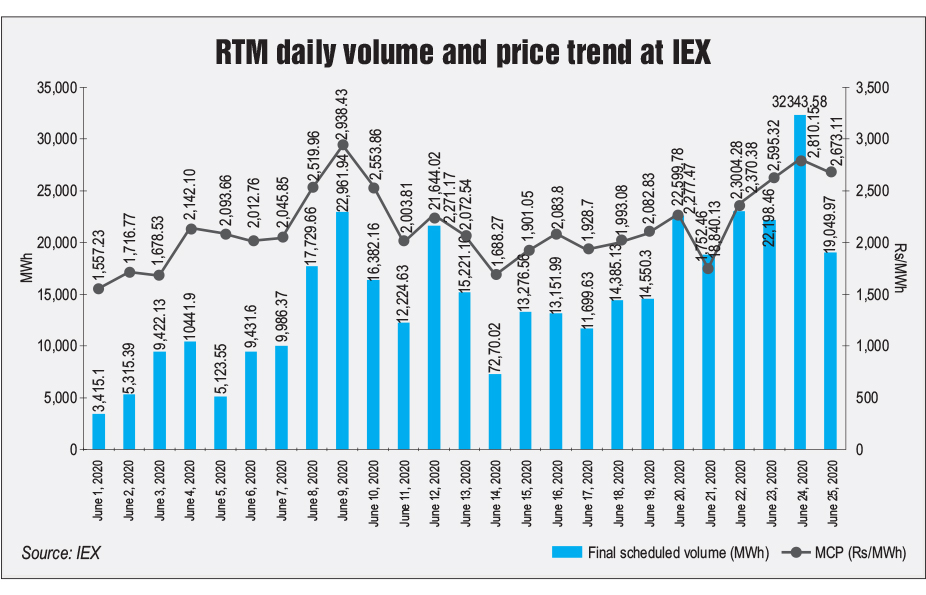 C&I consumers: Besides discoms, the RTM provides an attractive option to commercial and industrial (C&I) consumers to meet their electricity demand at competitive rates. Already, a large number of open access consumers are procuring power through the exchanges in the day-ahead market (DAM) and term-ahead market (TAM) segments. As per ICRA, C&I consumers may increase their power procurement through open access using RTM and DAM on power exchanges owing to attractive tariffs. However, this may negatively impact the revenues and profitability for discoms given that such consumer segments cross-subsidise other consumer category tariffs. Considering open access charges at the higher end of Rs 4 per unit and a spot power tariff of Rs 2.50 per unit, the procurement from open access is likely to be more economical for C&I consumers at the prevailing grid tariff rates. This in turn may also lead to an upward pressure on cross-subsidy surcharge and additional surcharge imposed by discoms so as to discourage such open access.

Generators: RTM offers a multitude of benefits to generators, which can sell excess generation on a round-the-clock basis, thereby enabling better capacity utilisation and improving commercial gains. It also provides alternative buyers to gencos in case discoms back down power. Likewise, gencos can procure power from the RTM in case of a forced outage and meet their contractual obligations to gencos and avoid DSM penalties. Prabhajit Kumar Sarkar, CEO, PXIL, adds, “Renewable energy and hydro generators can offer unanticipated surplus in the market. Merchant renewable energy generators can sell in the market and obtain RECs for the scheduled generation. Further, IPPs can offer uncleared volumes in the DAM in RTM.”

Grid operators: The RTM is also likely to help the system operator (NLDC/POSOCO) improve grid management and safety, especially with increasing renewable energy penetration. It can aid in managing real-time imbalances in the system arising out of demand changes, renewable energy variability, and supply-side constraints more efficiently than existing mechanisms such as DSM and ancillary services, thereby facilitating the large-scale integration of renewable energy. In an interview with Power Line last month, K.V.S Baba, CMD, POSOCO, said, “The RTM will help in the integration of renewable energy sources into the grid    as it provides a market opportunity closer to delivery for much better forecast. It is hoped that the RTM will serve its intended purpose and deepen the electricity markets in India.”

The RTM experienced a good start, especially considering the industry’s apprehensions regarding low electricity demand owing to the impact of Covid-19. Nearly 370 MUs of electricity has been traded at the IEX platform during June 1-25, 2020. The sell bid volume (at 1,476.5 MU) has been thrice as much as the purchase bid volume (539.8 MUs), leading to softening of prices. The average market clearing price (MCP) during this period stood at Rs 2.15 per kWh. The maximum MCP discovered so far has been Rs 4.30 per unit while the minimum price has been Re 0.015 per unit. Bajaj remarks, “The experience so far has been phenomenally good. On the first day of the commencement itself we had 100 market participants trading in the market representing generation companies, distribution utilities as well as open access consumers.”

A quick comparison with the DAM at the IEX shows that RTM prices are relatively lower. The average MCP at the DAM stood at Rs 2.28 per unit during June 1-25, 2020, which is 5.7 per cent higher than the RTM price (Rs 2.15 per kWh). The volumes at DAM, however, were higher at over 3,350 MUs since it is an established market segment.

Going forward, the prices at the RTM are expected to remain soft in the near term owing to moderate growth in demand. GirishkumarKadam, sector head and vice president, corporate ratings, ICRA, says, “The prices on the power exchange market (both the RTM and DAM) are expected to remain subdued (less than Rs 3 per unit) in the near term, given the surplus capacity scenario and subdued demand growth expectations for the current year, with the adverse impact of the ongoing lockdown/restrictions imposed to control the Covid-19 pandemic. Subdued power tariffs on the power exchange thus remain positive for the discoms and open access consumers and, in turn, would also augment the open access transactions. However, such spot tariffs remain unviable for thermal IPPs, which do not have long-term PPAs.”

The entire process since the time of gate closure – the announcement of available transfer capacity, bid matching, submission of electricity volume to the NLDC, and allocation of the available corridor margin between the exchanges – has to be completed within 15 minutes. This requires a robust communication network between the NLDC and the power exchanges to ensure the smooth operation of RTM sessions throughout the day.

The RTM has functioned well so far without any major issues. The RTM clearing engine has been developed at the NLDC and web-based energy scheduling applications in different RLDCs have been synchronised. The RTM has been implemented as a fully automated clearing mechanism at the NLDC without any manual intervention. As per NLDC’s feedback report to the CERC-certain technical and communication-related issues were faced in some of the RTM sessions during June 1, 2020 to June 7, 2020, but were resolved. Following the first week of the RTM, smooth operation has been observed at the NLDC as well as at power exchanges. Other challenges at the procurers’ end include the need for capacity building to manage round-the-clock operations as well as create own software and tools to facilitate bidding in a short span of time.

Going forward, the volume and price trends in the market will be closely tracked by the industry. This will offer better insights into demand growth and change in the power procurement strategies of end users. Market volumes are likely to grow in the near future as greater renewable energy is added to the system and existing long-term PPAs of discoms expire.

Net, net, the RTM has unlocked a new regime, which will be a win-win for all stakeholders.