Transmission Corporation of Telangana Limited (TSTRANSCO) came into existence in June 2014 with the formation of a new state, Telangana, by bifurcating the pre-existing state of Andhra Pradesh. Since then, the transco has continuously strived to expand its transmission infrastructure and improve transmission system availability in the state, which stood at almost 99.98 per cent in 2018-19. Since its inception, the transformation capacity of the state has more than doubled, and transmission losses have declined significantly to 2.65 per cent in 2019-20 from 3.17 per cent in 2014-15. The strengthening of the transmission system has helped improve the voltage profile in the state to a large extent besides enhancing the capacity to handle an increasing peak demand, which has grown from 5,661 MW in 2014 to 12,976 MW in 2019.

TSTRANSCO’s transmission losses in 2018-19 and 2019-20 stood at 2.85 per cent and 2.65 per cent, respectively, declining from 3.17 per cent in 2014-15. The transco has undertaken a number of loss reduction measures such as system improvement and reactive power compensation to maintain the low levels of transmission losses. The company’s normative system availability was maintained at 99.98 per cent from 2015-16 to 2018-19. TSTRANSCO has successfully catered to the increasing contracted demand in the state. As of April 2020, the state’s contracted capacity stood at 15,864 MW, more than doubling since June 2014.

The steps implemented by the transco to improve the performance and monitoring of the transmission system include the installation of XLPE cables and GIS substations, replacement of aged conductors in a phased manner to reduce interruptions, reinforcement of the conductor of overloaded lines, periodical tree cutting work to prevent branches from falling on the conductor, quarterly inspection of lines, and timely rectification of defects.

The implementation of renovation and modernisation schemes has led to reduced outages of substation equipment, improved reliability and stability of the transmission system and ensured 24 hours of power supply to the farming sector. Further, the SCADA/EMS system has been installed at the SLDC, consisting of seven data concentrator-cum-protocol converters (DCPCs). Each DCPC receives data from the nearest RTU stations, processes it and then transmits the real-time data to the SLDC for monitoring, control, storage and reporting.

TSTRANSCO is carrying out hotline works very effectively for live line maintenance of 132 kV to 400 kV lines and substations by adopting the hot stick method – using insulated sticks, bare hand technique, conductive suit and an insulated ladder. It is replacing old and failed insulators on existing lines and using offline signature preventive maintenance and line fault locators for locating the fault on lines during breakdowns. 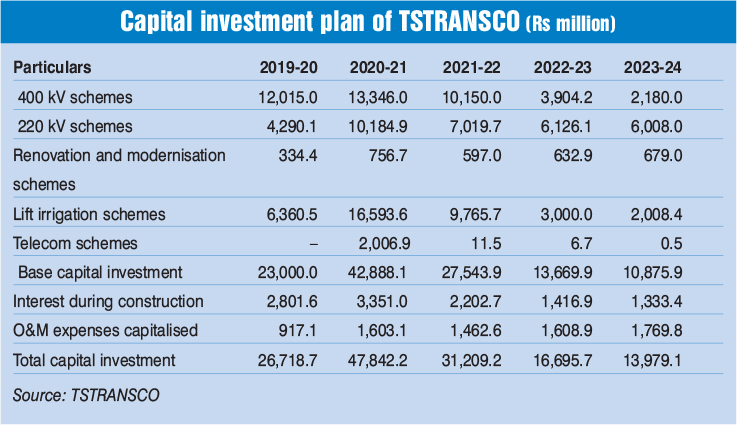 As of March 2020, TSTRANSCO had 4,262 MVA of total transformation capacity under various stages of construction, entailing a total cost of Rs 25.42 billion.

Going forward, the projected contracted capacity is set to increase with projects aggregating 11,589 MW currently under construction. Furthermore, the state has a solar installed capacity of 3,673 MW, and another 1,327 MW of solar projects are under construction. TSTRANSCO aims to strengthen the transmission system by strengthening its network in the state. The transco plans to undertake a capital investment of Rs 136.45 billion (approved by the state regulator) during 2019-24. Of this, the major capex will be incurred on 400 kV schemes and lift irrigation works. The construction of new 220 kV and 132 kV substations and connected lines is being executed with internal funding as well as funding from REC Limited and PFC Limited.

TSTRANSCO plans to add 6,780 ckt. km of transmission lines in five years, which will take its total length to 28,361 ckt. km by 2024. Besides this, the transco plans to add 990 bays over the five-year span, taking its network to 3,657 bays by 2023-24. The network expansion is expected to significantly improve transmission system availability in the state. Also, the installation of bus reactors and line reactors at various 400 kV substations is being taken up in order to limit overvoltages in the grid. In 2020, in view of the Covid-19 lockdown, the company sees a delay in project implementation, though it does not expect any cancellation of investment plans.

Further, the planned system improvement works include upgradation of the protection system of all 220 kV and 400 kV substations with numerical relays compatible with the IEC 61850 protocol, the installation of cameras at all 400 kV substations for better O&M, and the use of thermovision cameras in the extra high tension switchyard.

To conclude, TSTRANSCO has delivered a stable and satisfactory operational and financial performance. Going forward, with a significant proposed capex and a number of planned initiatives, the transco aims to achieve the effective evacuation of power from Telangana’s upcoming power projects, smooth integration of renewable energy sources and modernisation of its transmission system.