In a key milestone in the trading of renewable energy certificates (RECs), the Central Electricity Regulatory Commission (CERC) has reduced the floor price of solar and non-solar RECs to zero. The commission has observed that the market for RECs has matured significantly over the years and there is no need for a floor price to encourage the sale of these certificates. The revision of the floor price and forbearance price was necessary in light of the significant drop in renewable energy tariffs owing to competitive bidding of solar and wind energy projects as well as a decline in the overall project cost.

Vide an order dated June 17, 2020, the CERC determined forbearance prices for solar and non-solar RECs at Rs 1,000 per MWh while their floor prices were reduced to zero. The new prices will be effective from July 1, 2020 to June 30, 2021 or until further orders, and will be applicable to RECs issued after April 2017. For solar RECs issued before April 2017, eligible entities will have an option to adopt the forbearance price and floor price determined in the current order or to continue with those determined earlier in the order dated March 30, 2017. Meanwhile, for non-solar RECs issued prior to April 1, 2017, trading will take place in accordance with the commission’s letter dated May 28, 2018 (which will be subject to the final decision of the Supreme Court in Civil Appeal No. 4801/2018). The CERC also directed its staff to review the REC mechanism in light of market developments, including review of the need for floor and forbearance prices and of vintage or technology multiplier.

Rationale behind the revision

Between April 2017 and March 2020, the renewable energy landscape in the country underwent a sea change. Solar and wind energy tariffs declined substantially owing to competitive bidding; besides, the demand and supply of renewable energy witnessed significant changes. The average solar tariff discovered in auctions during January 2019 to March 2020 was Rs 2.74 per kWh, while the average bid tariff discovered for wind projects was Rs 2.51 per kWh during 2018-19 and Rs 2.85 per kWh during 2019-20. Under these market conditions, the commission found it necessary to review the floor and forbearance prices of RECs to balance the interests of eligible and obligated entities. The forbearance and floor prices currently applicable were determined by the commission vide order dated March 30, 2017. For non-solar RECs, these were based on generic tariff orders issued by state electricity regulatory commissions (SERCs) for 2016-17 or tariff orders prevalent at the time of notification of the order. Meanwhile, for solar RECs, the prices were based on solar photovoltaic tariffs discovered through competitive bidding up to February 2017, as published by the Ministry of New and Renewable Energy. 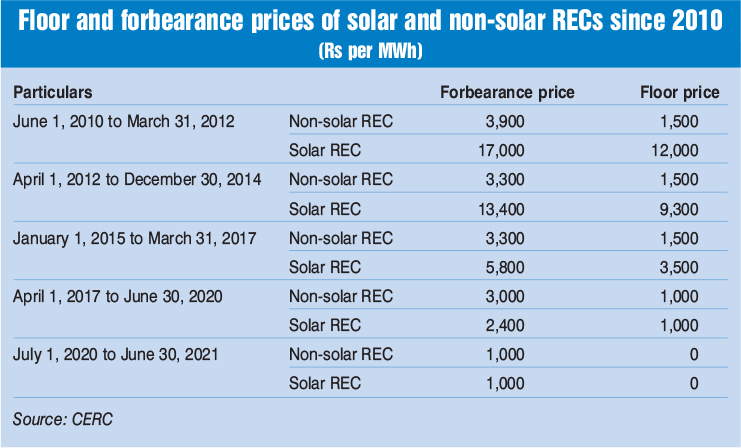 In the latest order on the forbearance and floor prices of non-solar RECs, the commission has considered the APPC and SERC-notified tariffs for all non-solar renewable energy technologies including the bid-discovered tariff for wind projects during the period 2018-20. The sum of the weighted average technology-specific forbearance price for all non-solar renewable energy technologies has been rounded off to arrive at the forbearance price of Rs 1,000 per MWh. Meanwhile, the sum of the weighted average floor price based on the highest difference between minimum project viability and APPC and the relative share of technologies in the projects registered in the REC framework is Re -0.22 per kWh. Based on this, the commission has observed that the market for RECs has matured and a floor price is no longer required.

Solar RECs: For the determination of floor and forbearance prices for solar RECs, the commission has considered three different scenarios.