This month saw the roll-out of a key reform that is expected to open up an important sector to competition. In June 2020, the coal ministry released a list of 41 coal mines to be auctioned for commercial coal mining.

The commercial coal mine auctions are aimed at achieving the broader goals of reducing coal imports (which stood at 247.1 million tonnes (mt) in 2019-20 as compared to 235.35 mt in 2018-19) as well as increasing self-reliance in coal production, besides increasing competition and removing the monopoly of Coal India Limited (CIL). The 41 mines are expected to achieve a peak production of 225 mt, accounting for around 15 per cent of India’s coal output in 2025-26. The mines are expected to attract a capital investment of around Rs 330 billion over the next five to seven years, adding Rs 200 billion annually to state government revenues. Land acquisition has been cleared for 12 blocks and bidding is expected to start in August 2020.

Key provisions such as the revenue share model for bidding, relaxation in the eligibility criteria for bidders and performance-linked incentives to boost coal production have been introduced to attract industry interest in the auctions. Further, against the earlier provision of auctioning only fully explored coal blocks, now even partially explored blocks will be auctioned. Also, there will be no restriction on the sale and utilisation of coal from the mines.

Other steps being taken to drive investor interest include the release of the National Coal Index (NCI) and the setting up of a project monitoring unit to help successful bidders get government approvals for speedy mine development. The ministry has appointed KPMG to help in the early operationalisation of auctioned blocks and has set easy terms for coal mining to attract more bidders. However, experts anticipate a weak investor sentiment given that domestic and global firms are facing a liquidity crunch owing to the pandemic and demand has been subdued.

Of the 41 blocks put on sale, 34 are fully explored, four are partly explored and three are regionally explored. Eleven of these mines are in Madhya Pradesh while Chhattisgarh, Odisha and Jharkhand have nine each, and Maharashtra has three.

According to the coal ministry, 27 mines have a peak rated capacity of up to 5 million tonnes per annum (mtpa), nine have a capacity of 5-10 mtpa and the remaining five have more than 10 mtpa of capacity. Various types of coal blocks are available for bidding. There are 37 non-coking, two coking and two combo mines (coking plus non-coking). Also, all categories of mines are available – from a basket of 26 opencast to seven underground and eight underground-cum-opencast mines.

Bids: The price of coal extracted will be determined through the NCI, which will be set up by the Ministry of Coal (MoC). The NCI will have a market-linked benchmark. This price index will combine coal prices from all sales channels – notified prices, auction prices and import prices. Currently, the DIPP publishes the wholesale price index (WPI) of coal along with various other commodities. The calculation of the coal WPI is based on the notified price. However, it is not reflective of the true market conditions and only takes the CIL-notified price into account. Thus, the government felt there was a need to develop a National coal index, which is forward looking and takes into account all coal price sources with appropriate weightages.

The auction will comprise two rounds: technical and financial. The nominated authority for the coal auctions – a joint secretary-level official from the MoC – will evaluate the technical bids. Bidders will be required to submit their eligibility criteria, along with an initial offer to the nominated authority. The financial bid round will comprise two stages. The initial offer of technically qualified bidders will be ranked in descending order for the determination of qualified bidders. These qualified bidders will be eligible to participate in the e-auction and submit their final offer. The highest bidder for a mine selected for evaluation by the government will be declared the successful bidder.

Upfront amount: The government has reduced the upfront amount that miners have to pay to the mine bearing state. It will be 0.25 per cent of the estimated value of the geological reserves of the coal mine. It will be payable in four equal instalments. Earlier, the miner was expected to make the full payment. The ceiling for the upfront amount has been fixed at Rs 5 billion for mines with reserves of above 200 mt and Rs 1 billion for those with up to 200 mt of reserves. The larger the mine, the higher the upfront money.

Sale of coal: There will be no restriction on carrying out mining operations for consumption, sale or any other purpose. Coal produced from the mine may be sold by the successful bidder in any manner, including but not limited to captive consumption, coal gasification, coal liquefaction and export. 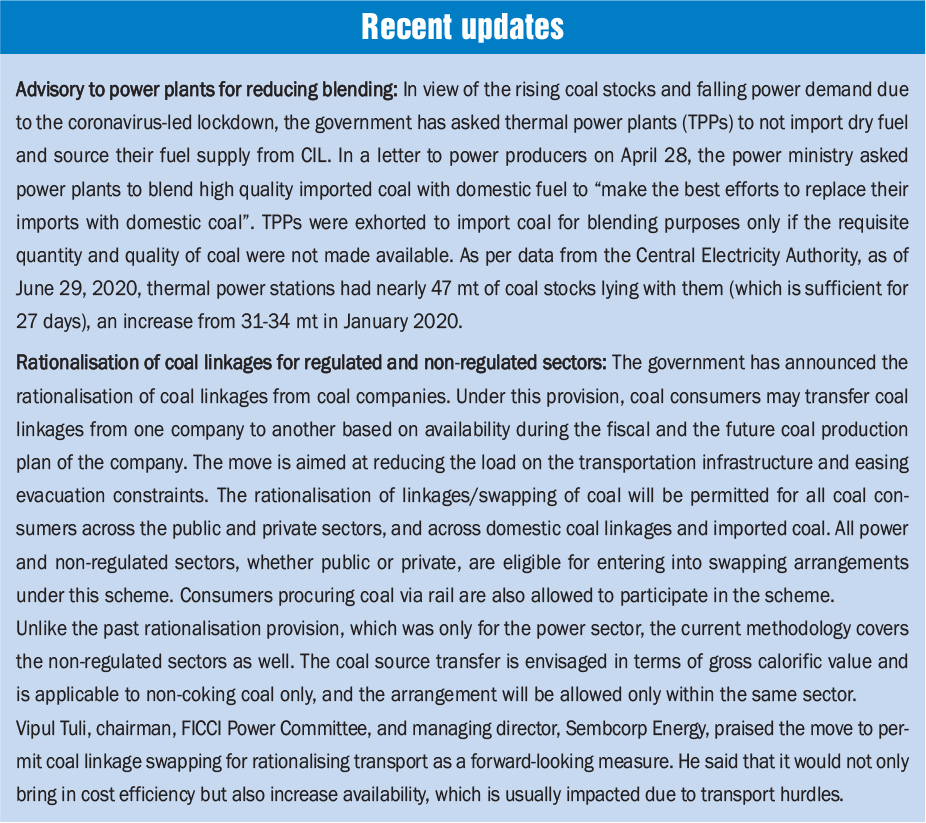 Auctions for commercial coal mining could help significantly in bringing down coal imports. In 2019-20, India imported 243 mt of coal from the seaborne market, which entailed a hefty import bill of approximately $21 billion. Of this, around 52 mt comprised coking coal imports, which would be difficult to replace given the limited domestic reserves. The balance 191 mt of imports were contributed by thermal coal, of which India has abundant reserves.

Meanwhile, CIL has issued a statement that it will continue to be the country’s leading coal producer even after the sector is opened up to private companies and that commercial coal mining will not adversely impact its production or profitability. CIL’s trade unions have, however, announced they will go on a strike in July against the decision to open the coal sector to private players. 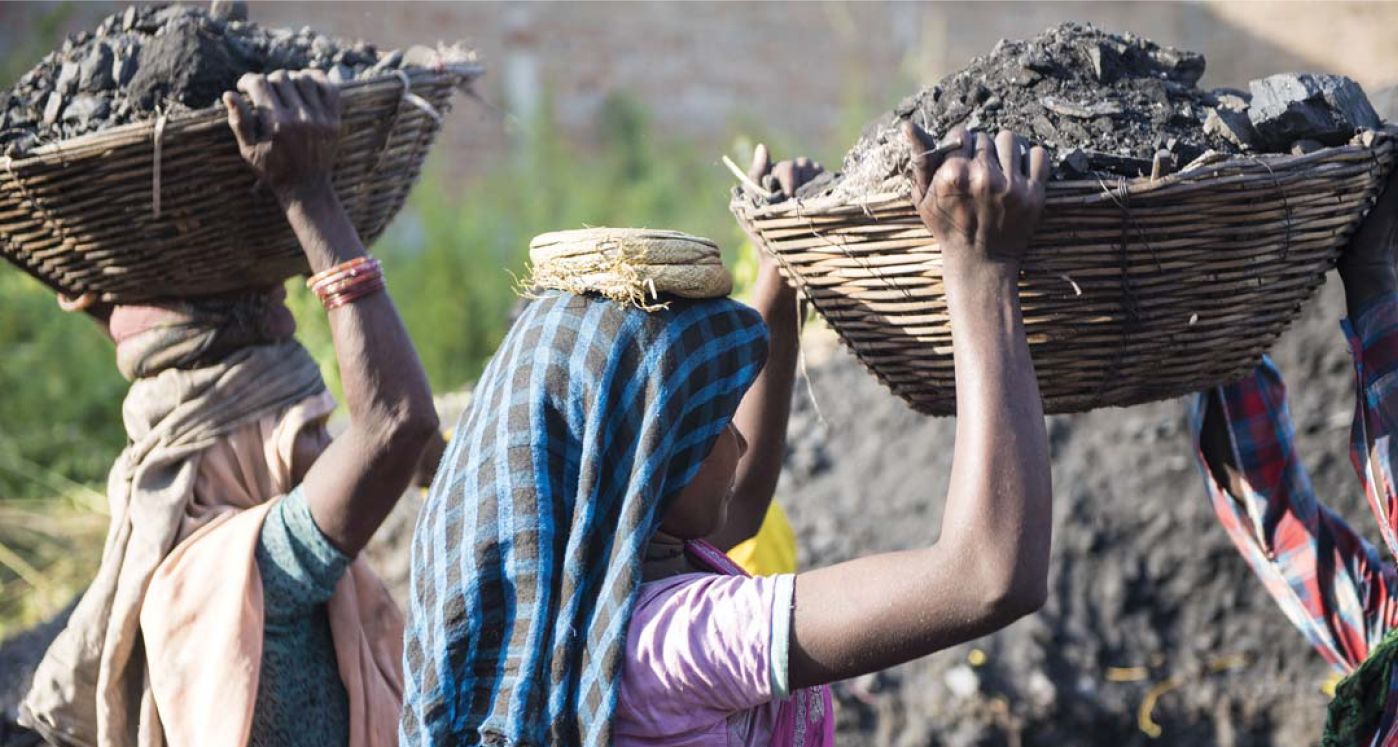 It remains to be seen if the auctions will be able to achieve the desired objectives given the current Covid-19 circumstances, which could impact investor sentiment. Further, for private miners, there could be tough competition from CIL. “In a market where an overwhelming majority of domestic supply is controlled by CIL and Singareni Collieries, affordability, dependability and consistency in coal quality remain critical drivers that will determine whether the existing coal customers will partly shift their sourcing to private commercial coal miners. Experienced players that have the know-how of efficiently operating a coal mining business stand a better chance to make a dent in the market. In the long term, we believe that coal consumers are likely to benefit from increased competition in the domestic coal mining industry,” says Roy.

There are also execution challenges for private miners. ICRA notes that of the 41 mines on offer, around 35 per are on forest land. Therefore, the proactiveness of the central and the state governments in ensuring time-bound clearances will be critical. Analysts also point out that initially there could be low interest given the subdued demand for power and the surplus coal position in the market. According to brokerage firm EmkayGlobal’s analysis, “With no major new thermal capacities coming up in the next few years and CIL setting a target of producing 1 billion tonnes of coal by 2024, investments in commercial coal mining may fetch low returns and pose risks in getting an adequate market. The current coal supply is sufficient to meet the fuel requirements of thermal stations.” Another concern is that coal sourced from the auctioned mines would increase the cost of power. The auction and revenue share model of these mines would increase the production cost of coal, resulting in higher tariffs for developers. Thus, the power generated will not qualify under the merit order despatch of discoms, Emkay notes.

Commercial coal mine auctions have been a long-overdue reform. Post the cancellation of captive coal blocks by the Supreme Court in 2014, the central government enabled commercial mining and sale of coal by private companies under the Coal Mining Special Provisions Act, 2015. The methodology for coal mine auctions for private companies was approved in 2016. In 2019, around 25 blocks were earmarked for auction, but the bidding did not take place.

Whether the auctions will bring about a transformation or this step will be a case of too little, too late will be known only in due course. Till then, this space will be keenly watched.