Launched in 2014, the Integrated Power Development Scheme (IPDS) aims to provide quality and reliable 24×7 power supply and strengthen the power distribution system in urban areas. The scheme is designed to help reduce AT&C losses, establish IT-enabled energy accounting/auditing, and improve collection efficiency. The Power Finance Corporation (PFC) is the nodal agency for the implementation of the scheme. The programme (excluding the Restructured Accelerated Power Development and Reforms Programme [R-APDRP] component) has an estimated outlay of Rs 326.12 billion, including gross budgetary support of Rs 253.54 billion from the government during the entire implementation period.

As of May 2020, projects totallingRs 320.59 billion have been sanctioned under the scheme. Of the total sanctioned outlay, Rs 282.6 billion is for system strengthening of the sub-transmission and distribution (T&D) network; Rs 28.21 billion is for digitalisation including IT enablement of discoms, enterprise resource planning (ERP) and smart metering; and the remaining Rs 9.78 billion is for new technologies such as substation monitoring and gas-insulated switchgear (GIS) substations.

As of May 2020, system strengthening work for 430 out of 546 circles has been completed. Funds amounting to Rs 202.91 billion, which is equivalent to 63 per cent of the project cost, have been released. Further, Rs 130.68 billion, that is, 65 per cent of the gross budgetary support, has been released. Besides this, the R-APDRP cost of Rs 440.11 billion including a budgetary support of Rs 227.27 billion as already approved by the Cabinet Committee on Economic Affairs has been carried forward to the scheme of IPDS, in addition to the outlay for other components.

As part of an agreement with state governments and respective state discoms, PFC (on behalf of the Ministry of Power) is facilitating the implementation of the IPDS. A common advisory was issued to utilities to set up a dedicated IT team for quick project implementation and system management, ensure regular updation/upgradation and security audit of the IT system, maintain a reliable communication network, ensure network and asset database updation, and undertake connection/disconnection through the geographic information system. Further, utilities must update feeder information on the National Power Portal, keep separate operations and maintenance (O&M) for meter and modem maintenance, and ensure regular training of IT manpower.

In terms of physical progress, as of May 2020, work has been completed in approximately 3,000 towns. At an all-India level, around 85 per cent of the work has been completed. More than 31,239 ckt. km of overhead lines have been charged for better reliability and 70,861 ckt. km of underground/aerial bunched cables have been laid to reduce losses. Further, 892 new substations have been added at the 33/11 kV level, besides capacity augmentation of 1,510 existing substations. GIS substations have been commissioned in Andhra Pradesh, Assam, Bihar, Karnataka, Kerala, Madhya Pradesh, Maharashtra and Uttar Pradesh. Also, 53,545 new distribution transformers have been charged so far for improving power supply in towns. Besides, 44,495 kWp of solar panels have been installed on government buildings as contribution towards green energy. The major states with solar panel installations include Uttar Pradesh (10 MW), Karnataka (8 MW), Kerala (5 MW) and Andhra Pradesh and Telangana (2.5 MW each).

Under digital technology projects, there are broadly three components – IT enablement of all towns, ERP and real-time data acquisition system (RT-DAS). IT enablement of all towns will establish an IT backbone, which will help in the large-scale roll-out of smart meters and promote computerised consumer services in small towns. Further, the GIS-based mapping of networks and assets is being undertaken to facilitate feeder monitoring. ERP is being taken up by states to optimise business processes through three modules – HR, finance and materials – and facilitate work and field service management. RT-DAS will help states in capturing outage information in real time at the 11 kV level for the System Average Interruption Duration Index (SAIDI)/System Average Interruption Frequency Index (SAIFI). 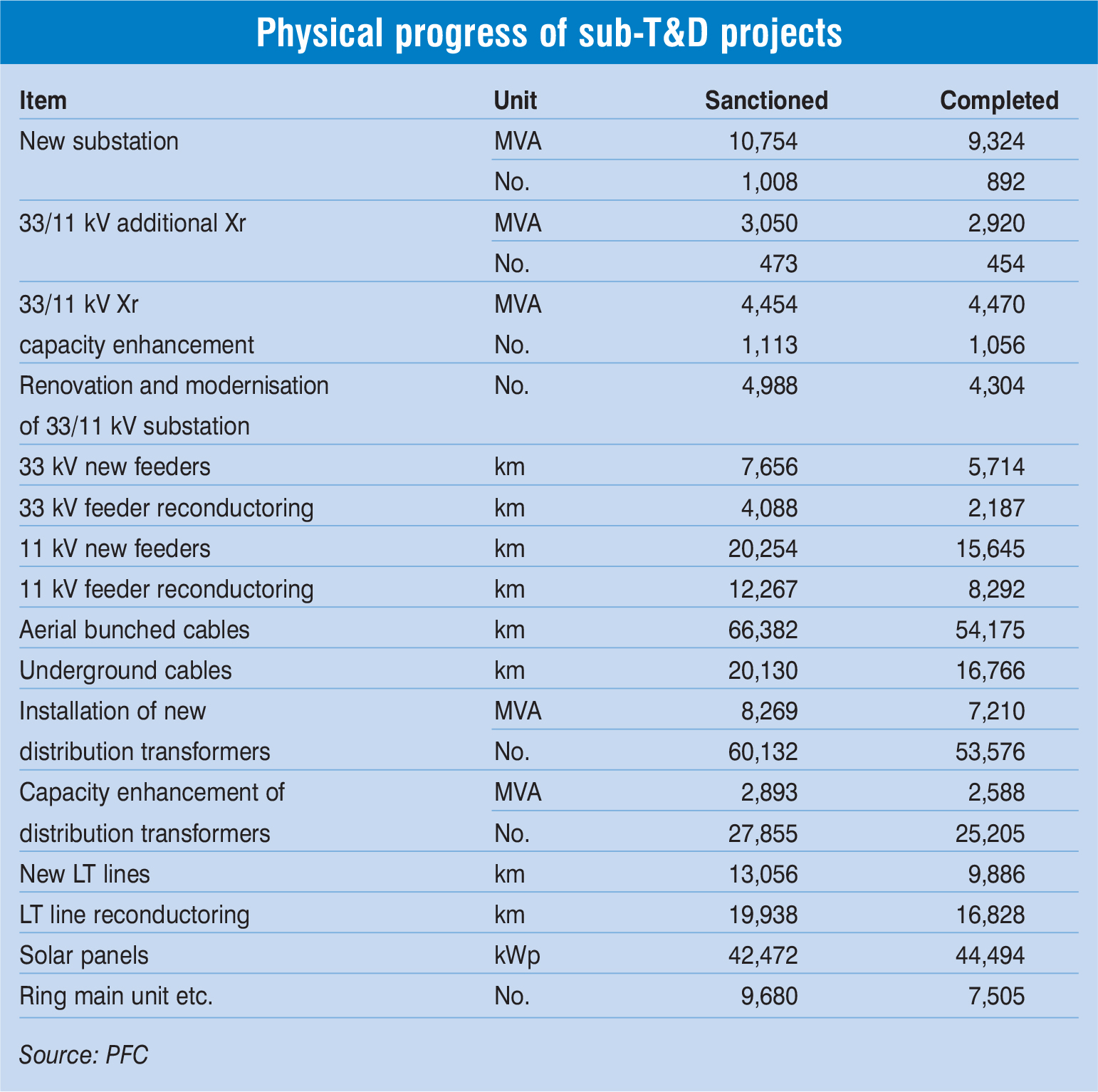 The Government of India has given due importance to metering as no new connections can be released without meters, thus ensuring 100 per cent metering for all. Metering under the IPDS covers static meters for feeders, distribution transformers and all consumers with unmetered connections, and the replacement of faulty meters. The scheme also covers the installation of prepaid meters in government establishments, advanced metering infrastructure (AMI)/smart meters, boundary meters for ring fencing of non-R-APDRP towns, automatic meter reading for feeders, distribution transformer and high load consumers, and net metering for rooftop solar installations.

As for the standards, IS 16444, Part I for direct connected single- and three-phase smart energy meters and IS 16444, Part II for CT-operated smart meters have been finalised by the Bureau of Indian Standards. Also, IS 15959 has been finalised for communication protocols. In addition to smart meters under system strengthening works, additional funding has been made available to states for smart metering as part of UDAY. This is given to utilities/states on the basis of improvement in UDAY performance parameters. An overall outlay of Rs 8.34 billion has been approved, wherein states have made detailed project reports (DPRs) either on the capex or on the revenue recovery model.

For smart metering projects under the IPDS, funding of 60 per cent (85 per cent for special category states) is admissible for the capex portion (that is, the cost of smart meters, head-end system and communication equipment) limited to a maximum of Rs 2,000 per node. The projects have to be implemented in 30 months. 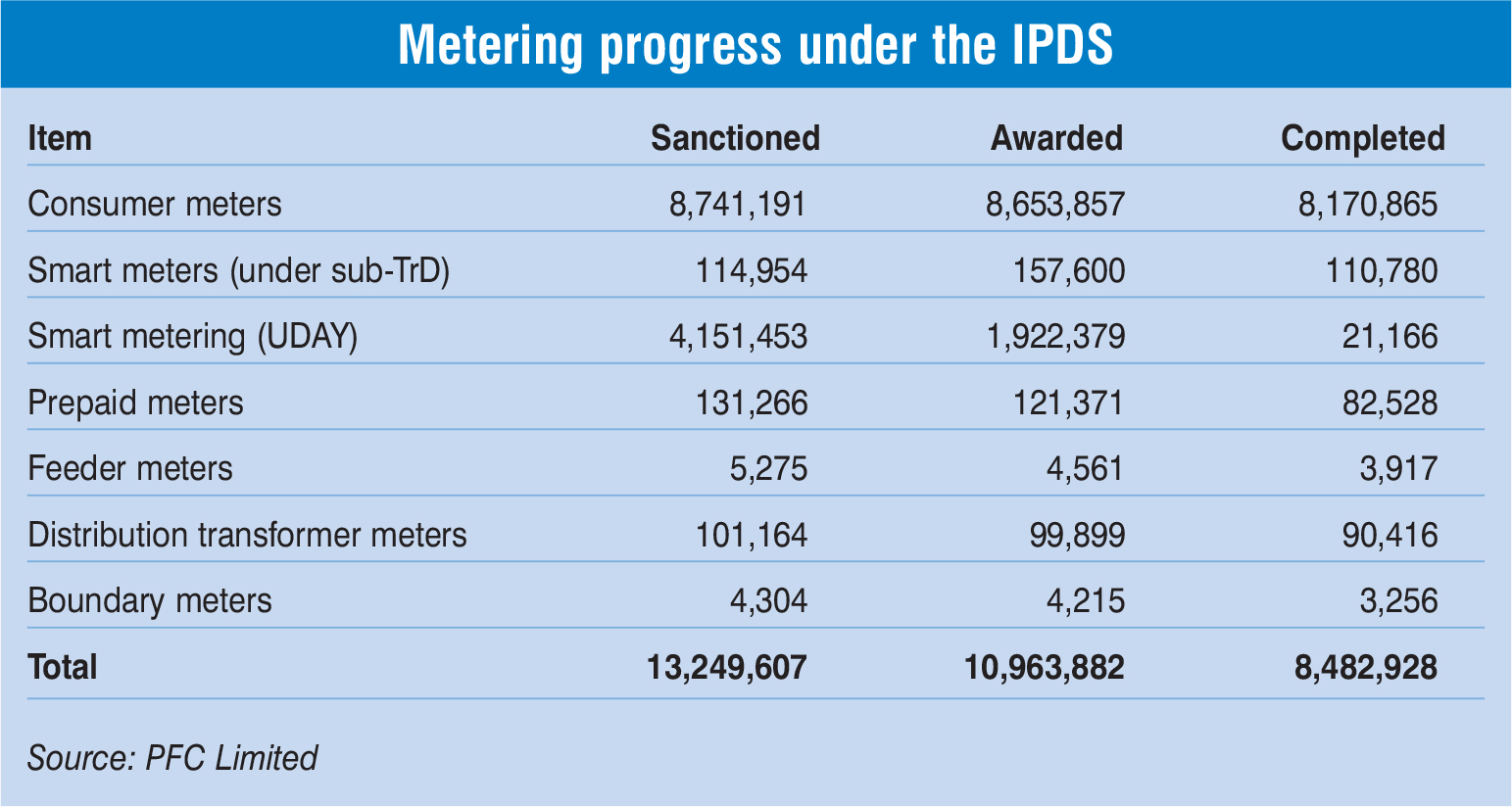 The slow progress in the implementation of ongoing projects is due to the lack of trained manpower and adequate smart meters, integration issues owing to multiple billing systems, poor communication, lack of funds with utilities, and utilities’ unwillingness.

Distribution utilities are reluctant to implement smart metering projects due to the high per unit cost of projects and their poor financial condition. The high cost also increases the burden on consumers in the form of tariff hikes. There have been instances of consumer dissatisfaction due to errors in billing/arrears data. Resistance smart meter installation is also noticed on the part of consumers due to the fear of remote disconnection of supply by the utility.

Communication networks are not yet reliable. Utilities are looking for multiple communication service providers to ensure 24×7 power to consumers. There is a risk of technological obsolescence of 2G and 3G communication technologies. The lack of trained IT manpower to manage project execution and O&M is another issue. Although various opex/capex-based models are possible for utilities to avoid the initial capital expenditure, there is a delay in bidding/bid evaluation/ extension/rebidding by utilities as they lack confidence in new and complex technology, particularly in communication and integration with existing multiple billing set-ups.

Bidders’ response to notices inviting tenders floated by various utilities also remains poor. In view of the poor financial condition of utilities, bidders are reluctant to invest huge funds in project implementation and O&M without a credible payment security mechanism. 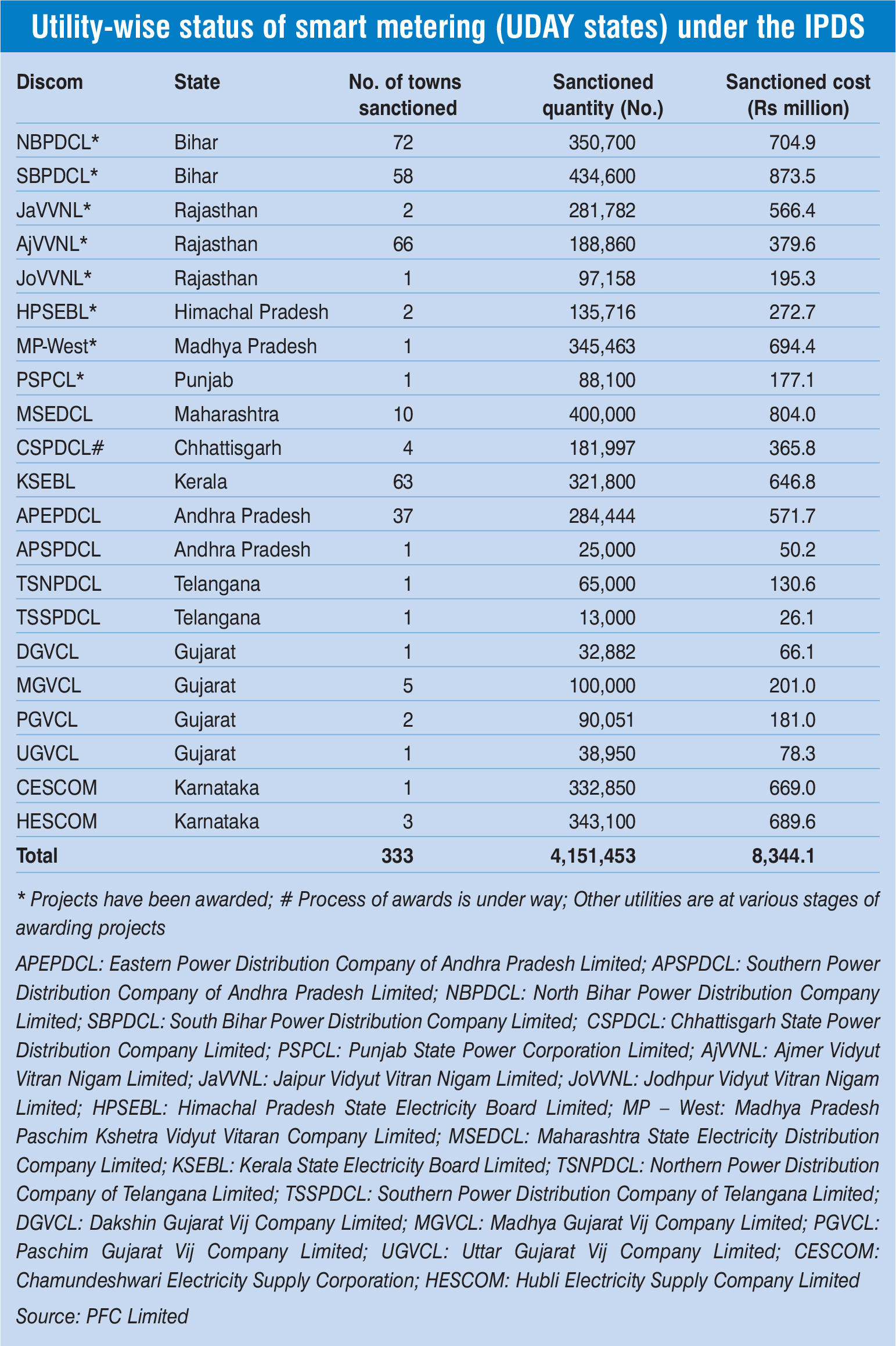 The central government’s assistance is required for setting up smart metering projects in utilities. A centralised backend infrastructure facility, managed on cloud by the central government, may be set up at the national level through system integrator and smart meter service provider agencies to manage meter data, billing and associated systems of smart metering projects. Further, consumers in remote locations and in rural areas may opt for prepaid meters. Energy Efficiency Services Limited (EESL) has procured more than 7 million smart meters for Uttar Pradesh, Haryana, Bihar and Rajasthan. States may partner with EESL to leverage economies of scale through the aggregation of smart/prepaid meters. Further, manufacturers need to ramp up their prepaid smart meter production to meet the current requirement of nearly 300 million meters. The payment security mechanism also needs to be finalised for all implementing agencies. The implementing agencies can train utilities’ manpower to manage the project. The onboarding of utilities/states for the setting up of a common back-end infrastructure facility (CBIF) and the integration of existing multiple billing systems is required, along with a sustainable payment security mechanism for implementing agencies. The operation and upkeep of the smart metering system should be managed by the utilities and the CBIF. In addition, competent agencies with financial capability are required in the areas of smart meters, IT system, communication services, etc. Further, success stories of implemented projects must be shared in review meetings. Coordination with utilities will pave the way forward for the smooth integration of billing and associated services with the smart metering system.

Based on a presentation by Subir Saha, Executive Director, PFC, at a recent Power Line webinar