Private participation is often regarded as the panacea for all the issues plaguing the power distribution segment – weak financial performance, high operational losses and poor customer service. Over the years, two modes of private participation have emerged – distribution franchises (DFs) and equity sharing – and both have seen limited progress. In recent times, however, the segment has witnessed increased involvement of the private sector. The central government’s move to privatise distribution operations in union territories in a bid to create model utilities is a key development in this regard. Besides, Odisha’s three discoms are up for sale while the acquisition of the Odisha government’s 51 per cent stake in CESU by Tata Power was completed in June 2020. Furthermore, Feedback Energy Distribution Company Limited (FEDCO) and Sai Computers have recently entered into distribution franchise agreements (DFAs) with Tripura State Electricity Distribution Company Limited (TSECL).

An update on the recent initiatives to privatise discoms…

FEDCO has emerged successful in securing DF contracts for four electrical divisions (EDs), Ambassa, Manu, Mohanpur and Sabroom, while Sai Computers has secured a DF contract for the Kailashahar ED in Tripura. The DFAs were signed with the respective franchisees in July 2020. As part of the agreements, FEDCO and Sai Computers will implement advanced technologies to provide better services and increase operational efficiency in these areas. This is the first time TSECL has appointed a distribution franchisee. The utility’s overall aggregate technical and commercial (AT&C) losses stood at about 31.34 per cent in 2017-18 and 15.24 per cent (provisional) in 2018-19.

The request for proposal (RfP) for the appointment of input-based DFs in five EDs was notified by TSECL in December 2019. As per the RfP, the franchisee is required to reduce AT&C losses in the DF areas over 10 years on a sustainable basis. The total consumer base of the four franchisees of FEDCO stands at over 109,000 and the connected load is over 70,000 kVA. In the Kailashahar ED, the connected load stands at 14,518 kVA and the number of consumers at 20,889.

FEDCO is already operational as a DF at four subdivisions in Meghalaya – Mawkyrawat, Mawsynram, Nangalbibra and Phulbari. Further, its term as a franchisee in the Puri, Nayagarh, Khurda and Balugaon EDs in Odisha was valid till June 2020 where it had been operating since 2013. Now with the takeover of CESU’s distribution licence by Tata Power in June 2020, the future of the franchisee is uncertain. In both Odisha and Meghalaya, FEDCO has demonstrated impressive results in terms of loss reduction and operational efficiency improvement. In Odisha, FEDCO has reduced the average AT&C losses in its divisions from 58 per cent in 2012-13 to 32 per cent in 2018-19. In Meghalaya too, where FEEDCO took over operations in March 2019, AT&C losses have dropped from 75 per cent in the base year to 55 per cent in 2019-20.

Meanwhile, Sai Computers is currently operating as a franchisee in the Dalu sub-division in Meghalaya. The company secured the DF contract in 2019-20 and has achieved impressive results in a year. It has reduced AT&C losses to 45 per cent from 87 per cent and improved power supply to consumers in the cyclone prone and hilly area. Sai Computers has experience of implementing advanced technologies across many utilities.

UT privatisation: The central government has moved one step forward following the announcement of discomprivatisation in UTs by the finance minister in May this year. The Power Finance Corporation (PFC) has appointed Deloitte and SBI Capital Markets (SBICAP) as consultants to help with the privatisation process. Deloitte has been appointed to help privatisediscoms in Puducherry, Chandigarh and the Andaman & Nicobar Islands; while SBICAP will be assisting in privatising the discoms in Dadra & Nagar Haveli, Daman and Diu, Jammu & Kashmir, and Ladakh. The Lakshadweep Electricity Department has reportedly been dropped from the privatisation process due to low power demand in the UT. The Ministry of Power is planning to soon issue standard bidding documents for the privatisation process, which is expected to be completed by end 2020. Several local and international companies are expected to participate in the bidding process for UT discoms. The prospective bidders include NTPC, CESC Limited, Torrent Power, the Greenko Group, Tata Power, the Adani Group, Italy’s Enel Group, Malaysia’s TenagaNasionalBhd, Electricite de France SA, and Hong Kong’s CLP Group.

Odishadiscom sale: In June and July 2019, the Odisha Electricity Regulatory Commission (OERC) issued notices inviting bids for selling the licences of NESCO, WESCO and SOUTHCO. The bid submission deadline has been extended several times over the past year and the latest one is September 11, 2020 for NESCO and September 14, 2020 for WESCO and SOUTHCO. Reportedly, Tata Power, CESC Limited and Adani Power have evinced interest in acquiring the distribution licences of the three discoms. Earlier, Reliance Infrastructure Limited (RInfra) had management control over WESCO, NESCO and SOUTHCO with 51 per cent stake in each of the utilities before its distribution licences were cancelled by the OERC in March 2015. Since then, the utilities have been managed by state-owned GRIDCO Limited, which holds 49 per cent stake in the companies. 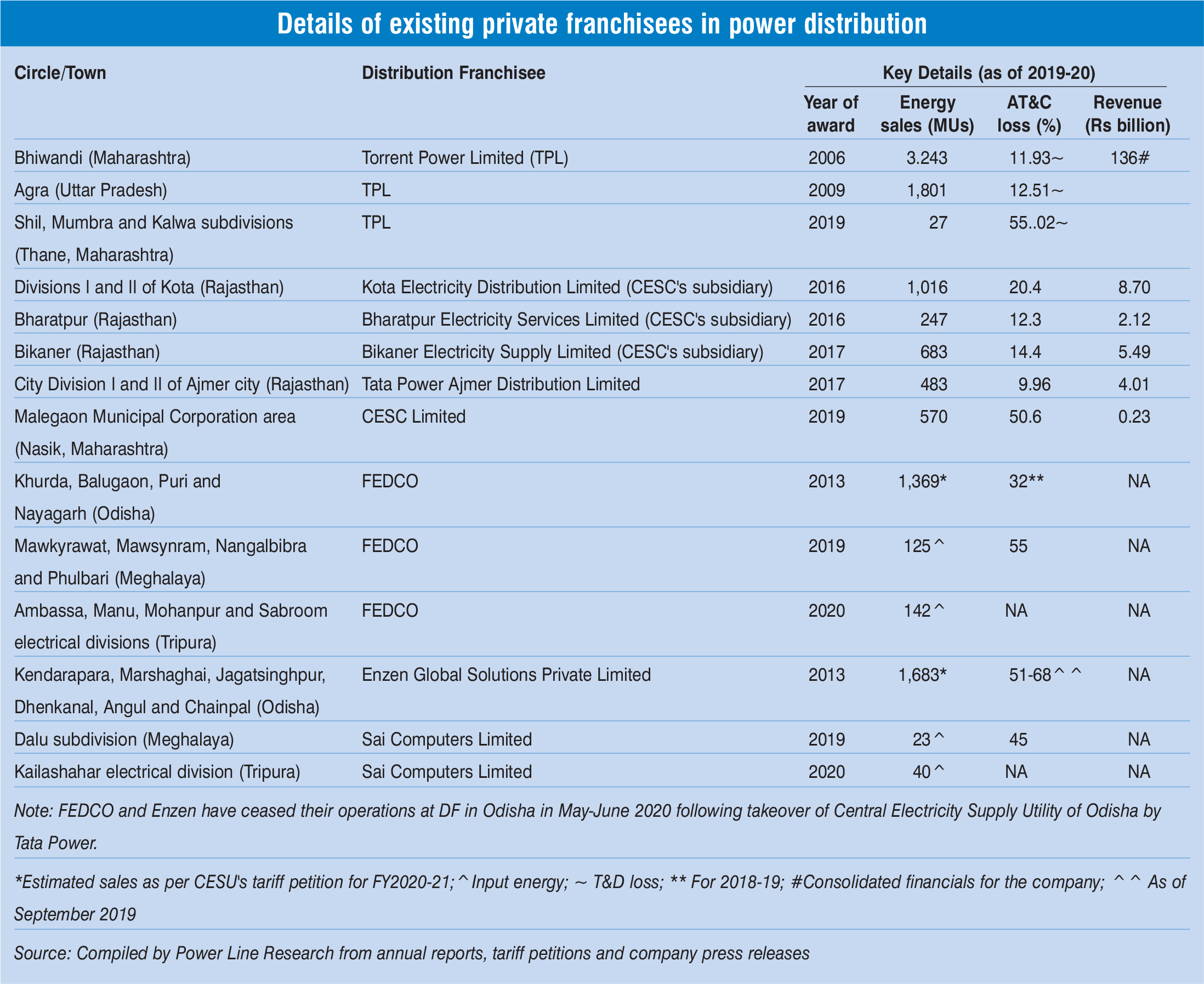 In May 2020, Tata Power took over the management of CESU after completing the acquisition of 51 per cent stake in the discom for a consideration of Rs 1.78 billion. The company received a letter of intent from the OERC for the distribution and retail supply of electricity in Odisha’s five circles (Bhubaneswar, Cuttack, Puri, Paradeep and Dhenekal) for a period of 25 years with effect from June 1, 2020. As per the OERC’s order, Tata Power will hold 51 per cent equity with management control and GRIDCO will have the remaining 49 per cent equity stake in the company. CESU is now renamed as TP Central Odisha Distribution Limited. Tata Power plans to improve and modernise the distribution system in five circles. The company has outlined a capex plan of Rs 3.44 billion for 2020-21. 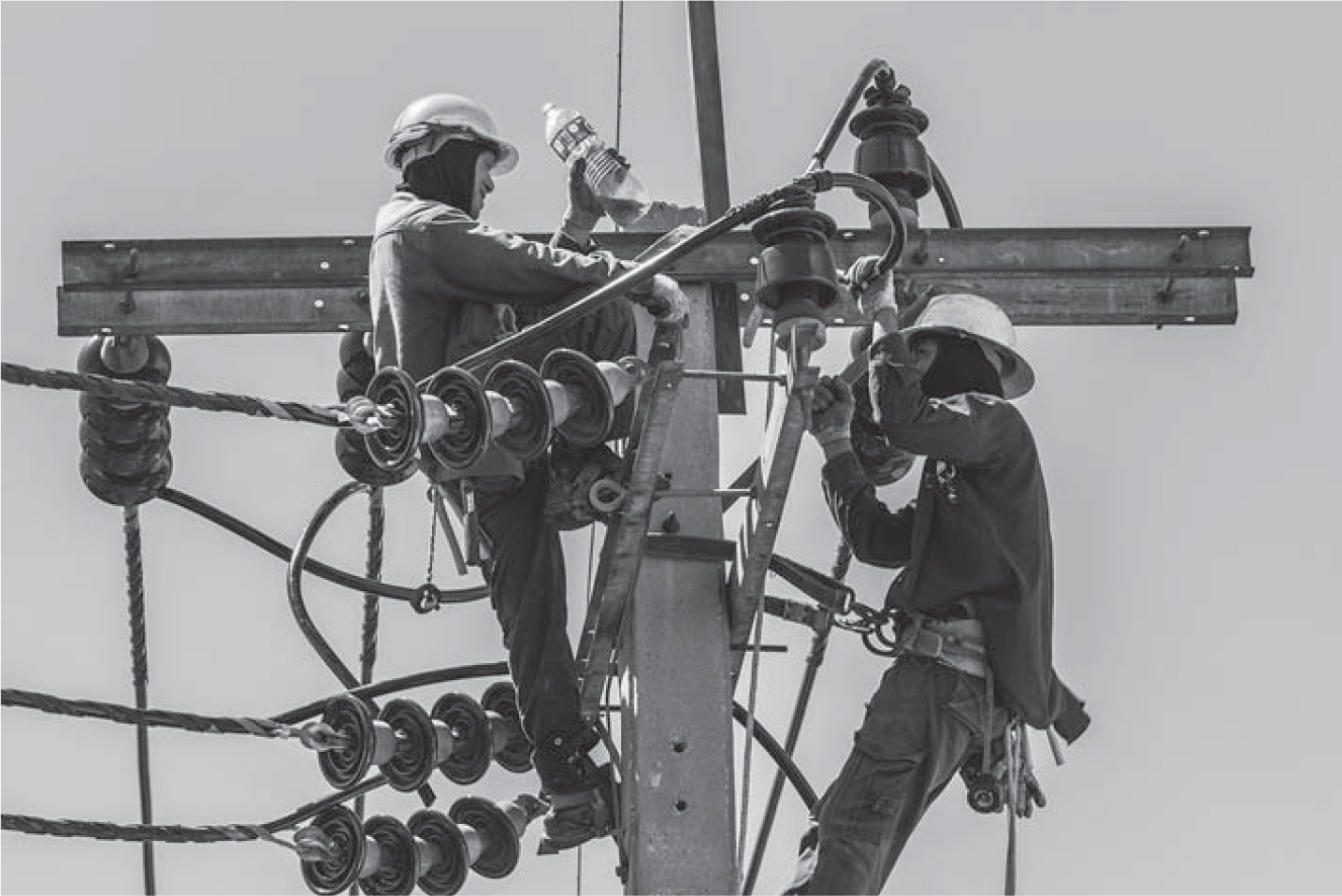 Proposed privatisation of districts under PuVVNL: The Uttar Pradesh government has recently granted in-principle approval for the privatisation of distribution operations in six districts under PurvanchalVidyutVitaran Nigam Limited (PuVVNL). These are Gorakhpur, Basti, Prayagraj, Mirzapur, Varanasi and Azamgarh. Power distribution in the rest of the districts of eastern Uttar Pradesh will remain with PuVVNL. The discom serves nearly 3.3 million consumers in the eastern part of the state. As per the UDAY portal (accessed on July 21, 2020), the discom’s AT&C losses stand at 37.98 per cent at present as compared to over 30 per cent in 2019-20, the highest among all discoms in Uttar Pradesh. PuVVNL recorded a net loss of Rs 978 billion in 2018-19 as per PFC’s latest report on the performance of state power utilities. Notably, Uttar Pradesh is not new to private participation in distribution. Torrent Power is currently operating as a franchisee in Agra, but similar plans to adopt the franchisee model in Kanpur in 2009 had failed. In 2018 too, the state government had announced plans to offer five cities, Lucknow, Meerut, Moradabad, Gorakhpur and Varanasi, to distribution franchisees but the initiative was shelved after resistance from employees.

Going forward, it is expected that discoms will be required to implement privatisation in order to access funds under the proposed ADITYA scheme, which has been in the works for quite some time. The draft Electricity Amendment Bill, 2020 also talks about distribution sub-licensees, which will open another possible route for private players to undertake distribution. In sum, the distribution segment is ripe with opportunities for private players. The successful results of these new developments may encourage more states to come forward and introduce greater private participation in distribution.