Established in November 2010, following the division of the erstwhile Tamil Nadu Electricity Board (TNEB), Tamil Nadu Generation and Distribution Corporation Limited (TANGEDCO) is responsible for power generation and distribution in the state of Tamil Nadu. The integrated utility serves nearly 30 million consumers and is the largest in the country in terms of consumers. Its aggregate technical and commercial (AT&C) losses stood at nearly 17.29 per cent in 2018-19, down from 24.74 per cent in 2014-15.

TANGEDCO owns a generation portfolio of over 7 GW. While the generation capacity has remained constant in the past five years, it has a project pipeline of 6.2 GW for the next five years. Of this, units totalling 2 GW are likely to come online in 2020-21. A capex plan of about Rs 490 billion is proposed for the period 2020-21 to 2021-22, with an emphasis on generation expansion and distribution system strengthening. 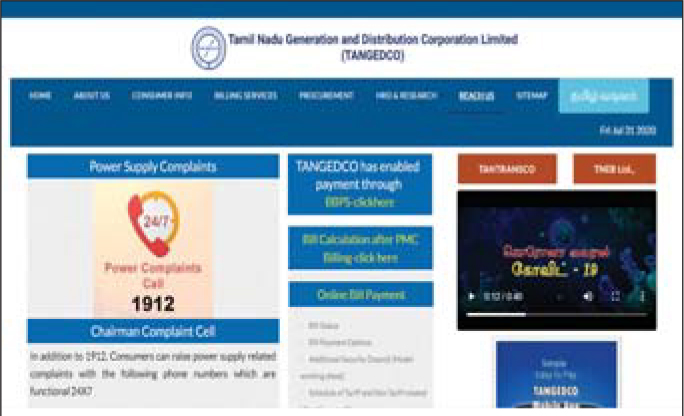 TANGEDCO’s AT&C losses have reduced from 24.74 per cent in 2014-15 to 17.29 per cent in 2018-19 owing to initiatives such as network reconfiguration, network re-conductoring, conversion of overhead lines into underground cables, automated meter reading (AMR), theft prevention by regular inspections and surprise checks, and replacement of existing electro mechanical meters with static meters. In addition, the utility has undertaken significant network strengthening under central government programmes like IPDS and DDUGJY.

In the distribution segment, TANGEDCO plans to implement smart and prepaid metering to further improve its performance. It has proposed to install over 14.5 million smart meters in a phased manner at T. Nagar as part of the smart city project. The tenders for the installation of smart meters at T. Nagar worth Rs 1.2 billion were floated in October 2019.

Impact of Covid and other challenges

Owing to the Covid-19 induced lockdown, the electricity demand in the state has fallen by nearly 18 per cent from about 30,200 MUs in April-June 2019 to 24,800 MUs in the corresponding period in 2020. The peak demand has also reduced from 15,627 MW to 14,590 MW during the same period. The billing and collection activities of the utility have been hampered. This has severely impacted its liquidity. To tide over the crisis, the utility has sought loans of around Rs 206 billion from the central government under the AtmaNirbhar Bharat package for the discoms. Also, since TANGEDCO does not have any headroom for further borrowing within the working capital limits set under the UDAY scheme, it has requested the centre to relax the working capital limits.

TANGEDCO is also facing challenges in meeting the environmental norms within the stipulated deadline. In December 2019, the utility sought an extension of two years to install flue gas desulphurisation systems in two units at its North Chennai TPP. There are also concerns related to fuel supply as Coal India Limited has curtailed the present linkage quantity of 20.445 million tonnes per annum (mtpa) to 18.791 mtpa and the state authorities have urged the restoration of the original linkage quantity. Further, the Chandrabila coal block allotted to TANGEDCO for the supply of coal to the Ennore Expansion TPS, the Ennore SEZ TPS and the Udangudi Stage-I TPS in Tuticorin has been cancelled owing to the lack of environmental clearance and the state government has sought the environment ministry’s intervention.

Further, the utility’s dependence on tariff subsidy from the state government has increased substantially over the years. In the seventh annual integrated ratings report released by the Power Finance Corporation (PFC) for the financial year 2018, TANGEDCO’s rating stood at “B”, same as the previous year.

In the coming years, the power demand in the state is expected to increase to 21,075 MW in 2025 and 26,281 MW in 2030 (as per the CEA’s 19th Electric Power Survey), next only to West Bengal, Uttar Pradesh and Maharashtra. Going forward, this would require TANGEDCO to ramp up its generation and distribution infrastructure expeditiously.