Metering is a key component of several government programmes in distribution including the Smart Metering National Programme (SMNP), the UjwalDiscom Assurance Yojana (UDAY), the Integrated Power Development Scheme (IPDS) and the National Smart Grid Mission (NSGM). These schemes are actively promoting smart metering to improve discoms’ billing and collection efficiency. Smart meters have especially benefited utilities during the current pandemic when physical meter reading and billing has not been possible due to the lockdown. Power Line presents an overview of the metering initiatives taken under various central government schemes…

The SMNP is being implemented by Energy Efficiency Services Limited (EESL) with a target to replace 250 million conventional meters with smart meters across India. So far, EESL has completed the installation of 1.24 million smart meters in Uttar Pradesh (984,000 smart meters), Haryana (123,000), Delhi (57,000 meters in the New Delhi Municipal Corporation’s jurisdiction) and Bihar (28,000). Distribution utilities in these states have achieved 95 per cent billing efficiency (for consumers with smart meters) and a 15-20 per cent average increase in monthly revenue per consumer even in times of the Covid crisis. Looking at the benefits of smart meters, several states/UTs such as Delhi and West Bengal have shown interest in smart metering.

In an official release, Saurabh Kumar, managing director, EESL, said, “The current situation has only served to reinforce the efficacy of smart meters by completely eliminating manual interventions. Smart metering is poised to be the launch pad for comprehensive reforms in the power sector. The benefits of smart metering, beginning with a seamless online billing process, real-time tracking of electricity usage, and reduction of billing errors, have cascaded down the energy value chain to consumers as well.”

EESL is also implementing smart prepaid meters under the SMNP. These smart meters can switch to prepaid mode remotely at the click of a button. The meters are based on advanced metering infrastructure (AMI) technology that measures and records consumers’ electricity use at different times of the day and sends this information to the discoms through GPRS. Bihar has about 25,000 prepaid meters (out of 28,000 smart meters), which have helped discoms earn a daily revenue of nearly Rs 500,000 through consumer recharge considering an average daily recharge of Rs 20.

EESL uses the approaches of bulk procurement, aggregation of demand, and monetisation of savings for smart meter roll-out under the SMNP. This roll-out is based on the build-own-operate-transfer model, wherein EESL undertakes all the capital and operational expenditure with zero upfront investment from states and utilities. In turn, EESL receives a nominal internal rate of return that is reflected in a mutually agreed upon automated payback structure.

In November 2019, EESL tied up with the National Investment and Infrastructure Fund, which manages the sovereign wealth fund of India, to establish a special purpose entity, Intellismart Infrastructure Private Limited. The vision behind this move was to make Intellismart the biggest system integrator in the country, which will provide high quality service during the transition period at a very affordable rate.

The IPDS was launched in 2015 to strengthen the power distribution system in urban areas. The estimated capital outlay under the scheme is Rs 326 billion and projects worth Rs 320 billion have been sanctioned so far. Of the total sanctioned outlay, Rs 282.6 billion is for system strengthening of the sub-transmission and distribution (ST&D) network; Rs 28.21 billion for digitalisation including IT enablement of discoms, enterprise resource planning (ERP) and smart metering; and the remaining Rs 9.78 billion is for new technologies such as substation monitoring and gas-insulated switchgear (GIS) substations. Funds have been released for 63 per cent of the project cost and work has been completed in 436 out of 546 circles.

Since IT is the backbone of any smart meter roll-out, the IPDS focuses on the IT enablement of all towns. Steps have been taken to provide computerised consumer services and undertake GIS-based mapping of networks and assets for feeder monitoring. Metering is a key component under the IPDS, which covers the installation of static meters for feeders, distribution transformers and all consumers with unmetered connections, as well as the replacement of faulty meters. The scheme also entails the installation of prepaid meters at government establishments, AMI/smart meters, and boundary meters for ring fencing of non-R-APDRP towns. It aims to enable automatic meter reading (AMR) for feeders, distribution transformers and high-load consumers, and net metering for rooftop solar installations. So far, nearly 13.2 million meters have been sanctioned under the scheme, of which 10.9 million have been awarded and 8.5 million have been installed. These include smart meters under the ST&D system strengthening component as well as under UDAY (see table 1). 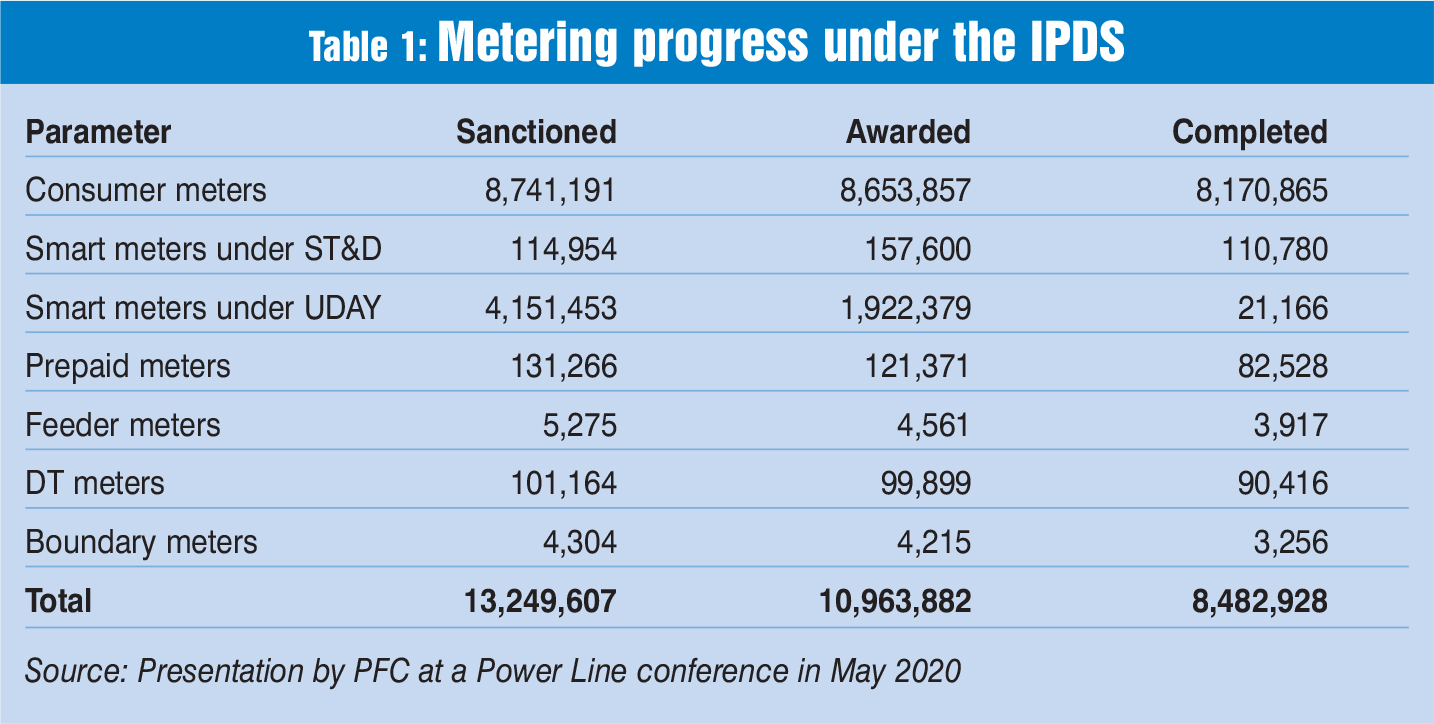 Smart metering projects have been also approved by the Ministry of Power (MoP) under the IPDS on the basis of improvement in UDAY performance parameters with overall outlay of Rs 8.34 billion. The states have made detailed project reports (DPRs) either on the capex model or a combination of the capex and revenue recovery models. IPDS funding would be admissible only for the capex portion (the cost of smart meters, head-end system and communication equipment) limited to a maximum of Rs 2,000 per node. The projects are to be implemented in 30 months. AMI/Smart metering projects under the UDAY component have been awarded in 8 out of 21 discoms for 1.922 million nodes. Overall, more than 21,000 meters have been installed under the UDAY component. 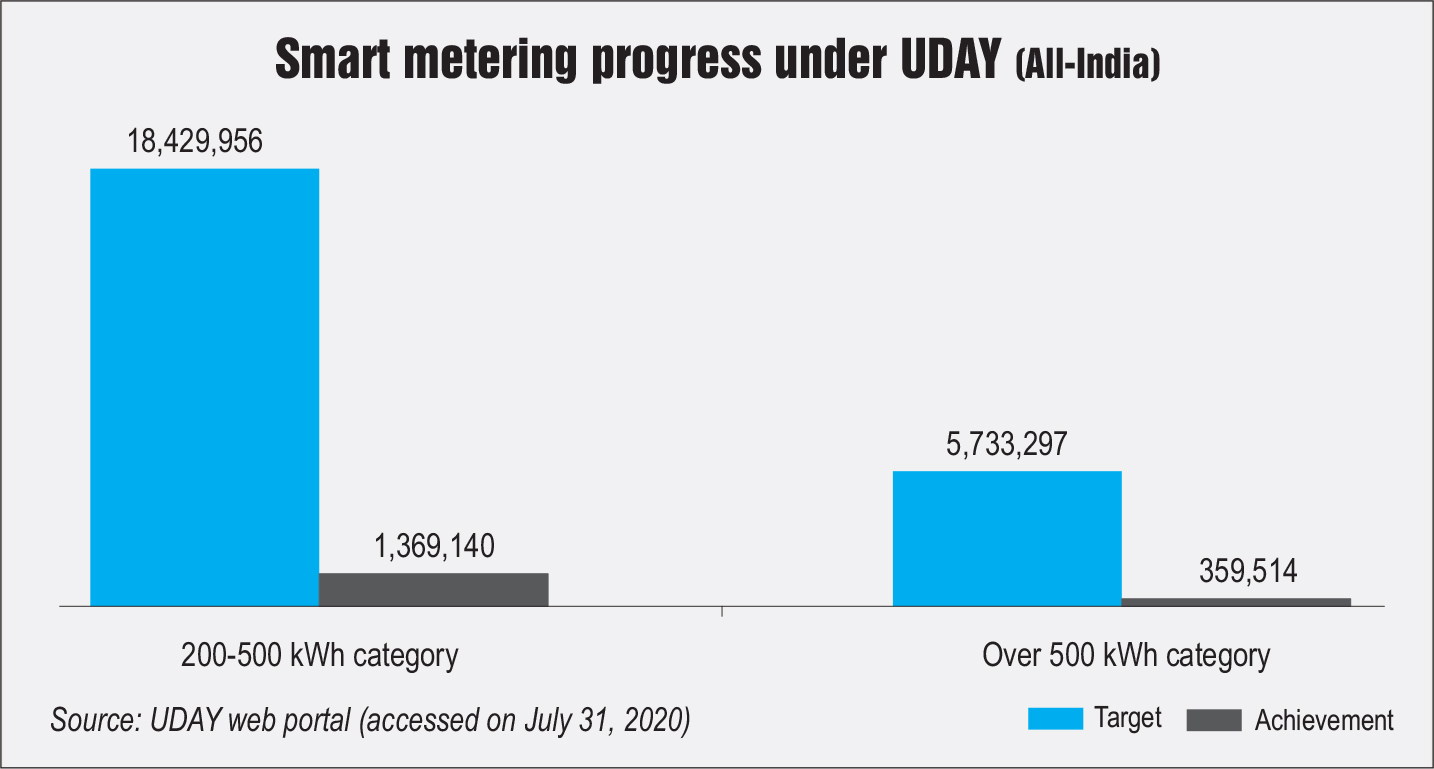 UDAY, launched in September 2015, completed its term in March 2019 with mixed results. As per recent data, the cumulative book losses of discoms witnessed an 85 per cent increase from Rs 151.32 billion in 2017-18 to Rs 280.36 billion in 2018-19, though losses have reduced significantly the base year (Rs 515 billion in 2015-16). The ACS-ARR gap has also reduced from Re 0.60 per unit to Re 0.27 per unit. The trend in power purchase costs has been non-uniform while collection and billing efficiencies have recorded some improvement.

However, the progress on the smart metering front has been dismal. The scheme envisages smart metering for all consumers over 200 kWh. For consumers with electricity consumption of 200-500 kWh, over 18.4 million smart meters are to be installed, of which only 1.37 million have been installed so far, indicating a progress rate of 7 per cent. For consumers with an electricity consumption of over 500 kWh, only about 359,500 meters have been installed against the target of 5.7 million, indicating progress of 6 per cent. Haryana, Madhya Pradesh and Puducherry have made significant progress in smart meter deployment under UDAY with over 119,000, 98,000 and 32,000 meters deployed respectively as of March 2020.

While UDAY’s term has expired and a new scheme, the Atal Distribution System Improvement Yojana, is in the works, smart metering is expected to remain one of the key focus areas of the government. 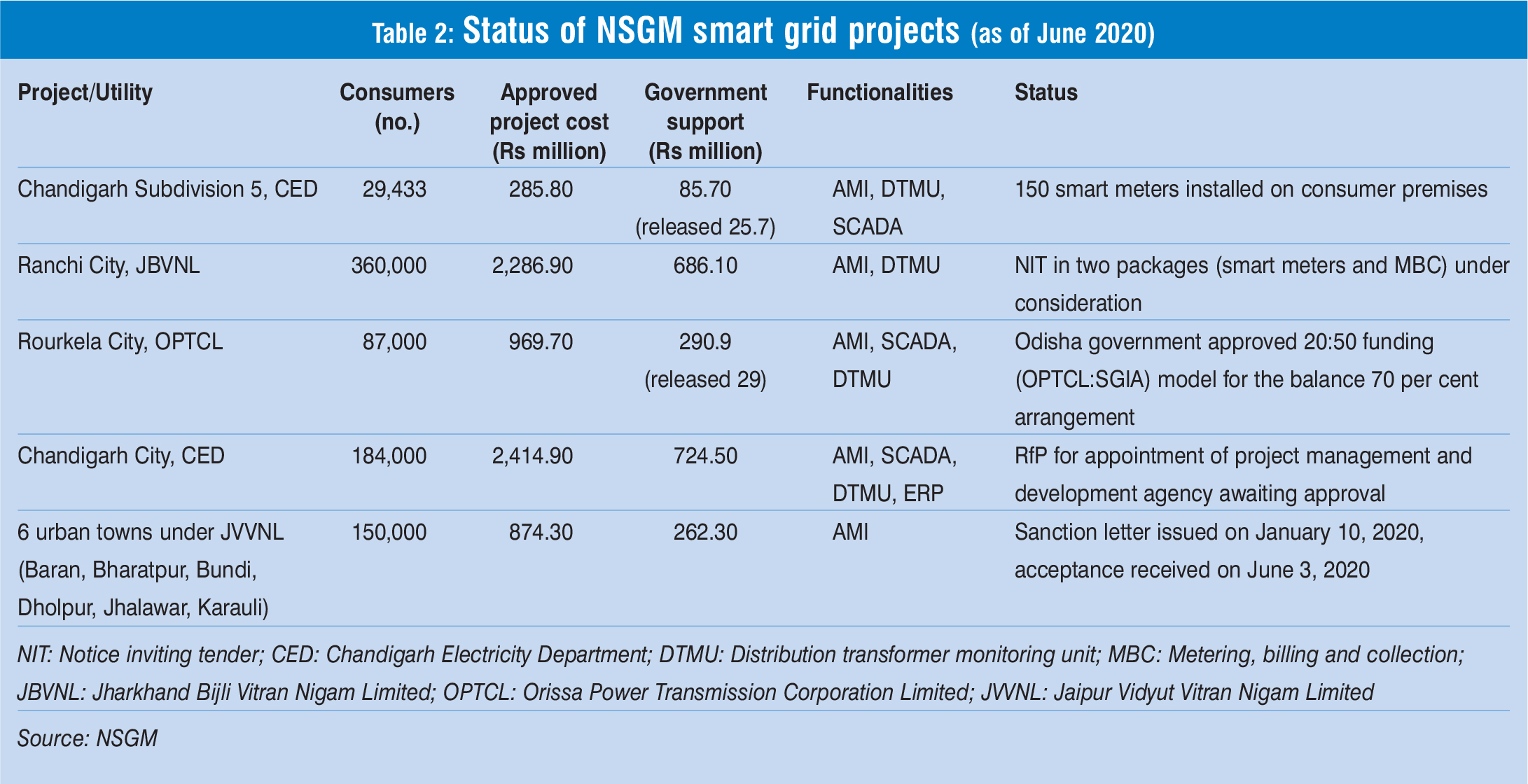 Smart meters are not just hardware components they comprise an entire ecosystem. A key challenge faced in their implementation is that all processes have to be automated, from meter reading to billing and payment. Currently, utilities have these processes on separate platforms and it is a challenge to bring these on to a single standard platform. These issues can be overcome with the use of right solutions and technologies, and the organisations like EESL are helping discoms resolve these issues. Given the central government’s repeated mandates to switch to smart prepaid meters in the next three years, discoms are expected to step up their implementation efforts. The Covid crisis has clearly shown that smart meters are the way forward for the power sector.