The National Motor Replacement Programme (NMRP) has been one of the key initiatives launched by Energy Efficiency Services Limited (EESL) to address this issue. Motors sold (and used by end-users) in India have lower energy efficiencies (IE1 or less) than the ones available in the global market. It is estimated that 90-95 per cent of the current installed stock of motors is at the IE1 and sub-IE1 levels. With a view to realising the immense potential for energy efficiency in industries, EESL has identified energy-efficient motors as the technology of focus for entry into the industrial sector. EESL estimates the market for energy-efficient motors to be about 10 million by 2023-24. The investment potential for energy-efficient motors until 2023-24 is estimated at Rs 125.34 billion.

New and increasingly stringent efficiency standards have made motor efficiency a priority among motor manufacturers and designers of motor-driven systems.

The percentage of the input electrical energy converted into usable mechanical energy is defined as the energy efficiency of a motor. The International Electrotechnical Commission (IEC) is an international standards organisation that prepares and publishes standards for electrical equipment. IEC Standard 60034-30-1 categorises electric motors, based on their energy efficiency, as IE1 (lowest efficiency), IE2, IE3, IE4, or IE5 (highest efficiency). Policymakers typically adopt one of these levels as the minimum performance requirement.

In India, the penetration of energy-efficient motors remains low while motors below IE2 have a substantial market share. So far, India has been behind its global peers in terms of the adoption of Minimum Energy Performance Standards (MEPS). Around 41 countries have made an effort to transition to high-efficiency motors and motor-driven systems through regulatory measures and supporting policies. A majority of these countries have adopted IE3 as the MEPS.

Further, the Department of Industrial Policy and Promotion (DIPP) issued a quality control order requiring all imported and domestically manufactured motors to conform to a minimum IE2 class of efficiency as per the revised IS:12615 with effect from October 1, 2017.

Motors can be classified into different types based on their operating characteristics. Among the different technologies and designs available, squirrel cage induction motors are used relatively more frequently in the industrial context. Squirrel cage induction motors are used in agricultural, industrial and domestic applications, depending on their capacity ratings. As per IEEMA data, low tension (LT) squirrel cage motors occupy a major share in the production (on a kW basis) among all other categories of motors.

In terms of the existing state of electric motor technology, a reduction in watt losses can be achieved in various ways. All of these changes for the reduction in motor losses are possible with existing motor designs and manufacturing technology. They would, however, require additional materials and/or the use of higher quality materials and improved manufacturing processes, resulting in increased motor costs.

Replacing a motor may be justifiable solely on the grounds of the electricity cost savings derived from an energy-efficient replacement. This is true if the motor runs continuously, the power rates are high, the motor is oversized for the application, or its nominal efficiency has been reduced by damage or previous rewinds. 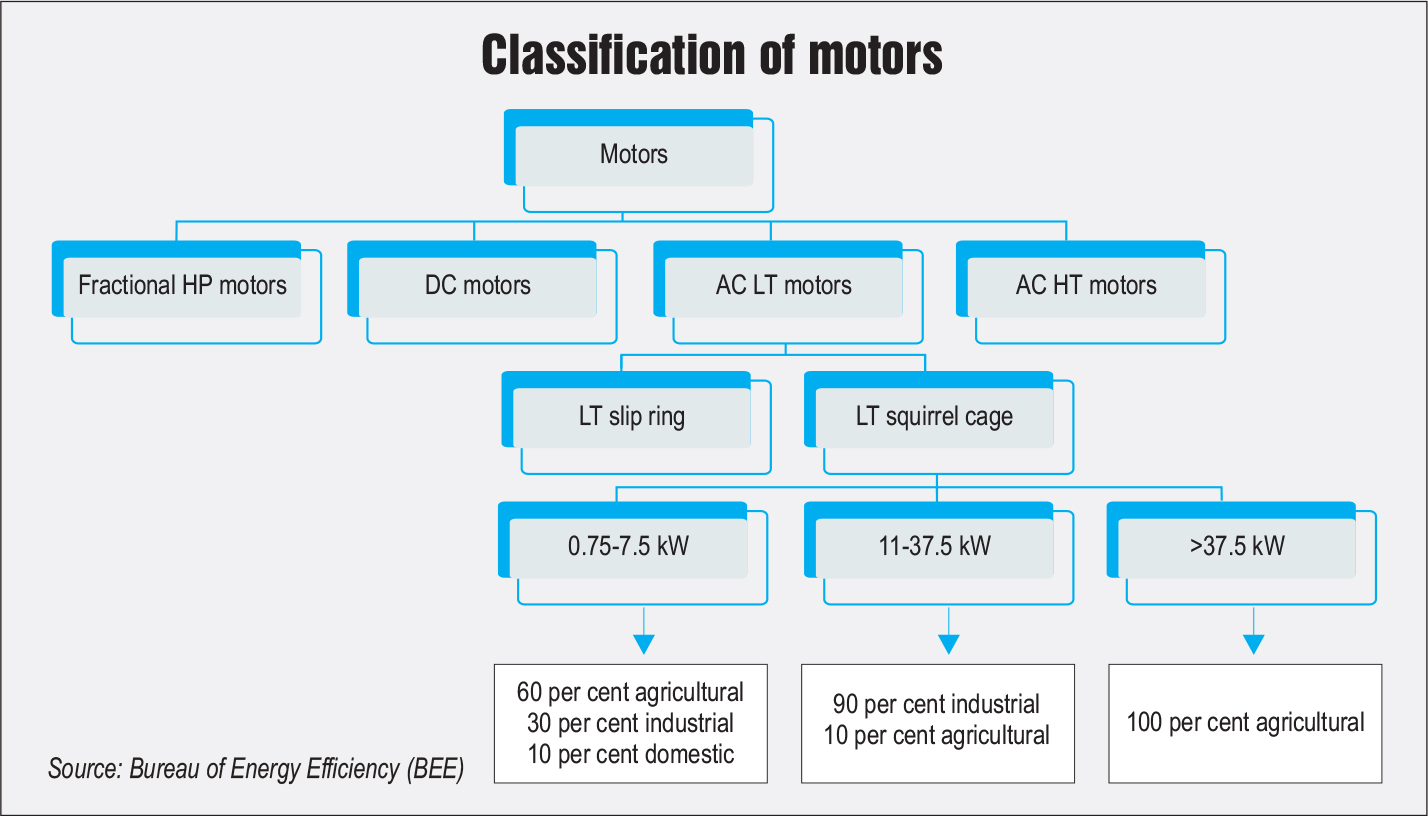 EESL has designed the NMRP to promote the use of energy-efficient motors that adhere to the IE3 standard. The motor replacement programme offers appropriate technical specifications that consider key customer pain points viz. high initial costs, high operating and maintenance costs, and quality of the products.

The primary objective of the NMRP is to enable easier and faster adoption of premium efficiency IE3 motors by the industry. Through demand aggregation, EESL is achieving an attractive price point and creating a quality product for the industry through a bulk procurement process. The benefits of cost reduction achieved via bulk procurement are passed on to consumer industries, hence making IE3 motors more affordable.

In the initial phase, EESL targeted three-phase LT induction motors in the capacity range of 1.1 kW to 22 kW, preferably directly coupled with loads such as pumps, fans, blowers and air compressors. After the successful completion of the first phase of the NMRP and obtaining inputs from industries, vendors and other stakeholders, EESL released the second phase of the programme to encourage the use of premium efficient (IE3) motors instead of old inefficient motors, with motors ranging from 1 HP to 100 HP.

EESL estimates that 40,000 IE3 motors, mostly in the sizes of 0.75 kW to 75 kW (3 phase LT motors) can potentially be targeted for replacement through the second phase of the programme. The vision document (2019-2024) NMRP has an energy saving potential of 22 billion kWh per year and emission reduction potential of over 18.3 million tonnes of carbon dioxide (CO2) equivalent annually. 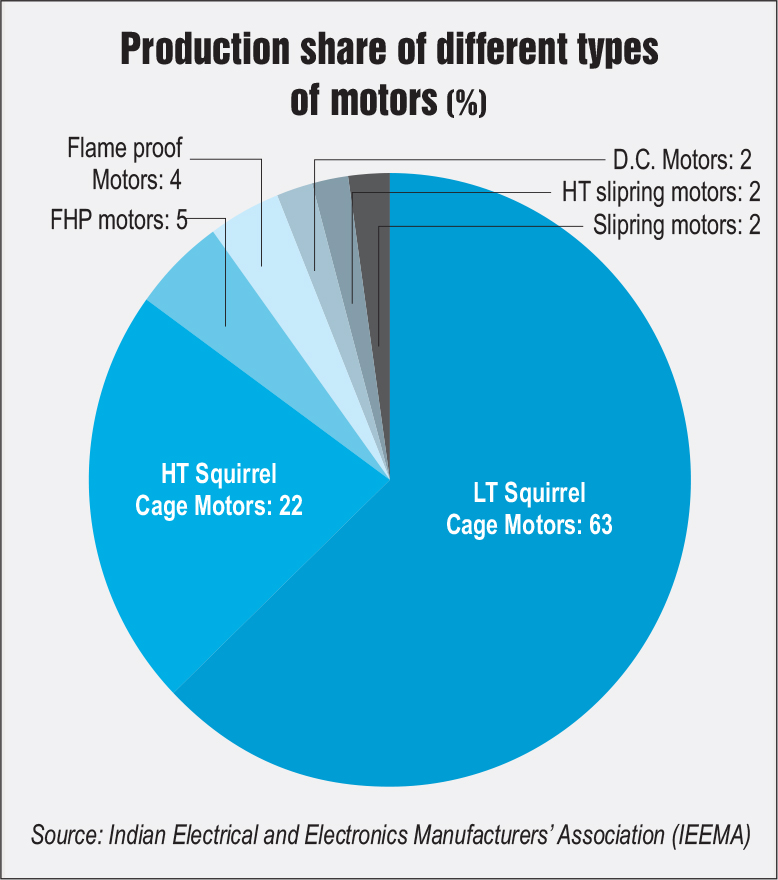 Industries have been slow in replacing existing motors with premium efficiency IE3 motors due to several challenges posed by buyers, consultants, operations and maintenance staff, as well as suppliers. Efforts are needed to educate buyers on the energy and cost savings, payback period of investment, and high reliability and low maintenance offered by IE3 motors.

Other barriers existing at different stages are the high initial purchase price of IE3 motors, the need for the development of package solutions for existing industrial users to facilitate the switch-over to IE3 motors, the unavailability of adequate testing facilities to meet the testing needs, the lack of R&D manpower, the high investment needed for design and testing infrastructure, and the rewinding of old inefficient motors multiple times rather than replacing them with energy-efficient motors.

In India, the supply of IE3 motors has not been very smooth not only due to lower demand but also because setting up test and design facilities involves significant investments as well as skilled manpower, which cannot be afforded by the micro, small and medium enterprise (MSME) sector at least. Hence, there is an urgent need to understand the challenges faced by MSMEs and how they can contribute in the adoption of IE3 motors quickly so that IE3 can become the likely MEPS two to three years down the line.