Blockchain is fast emerging as a key technological platform for electricity utilities to meet their digitalisation objectives. Blockchain is a distributed and decentralised public ledger. The technology essentially helps in maintaining an open yet tamper-proof ledger in cyberspace with the use of cryptography. The ledger is shared with all participants. Equipped with these unique features, blockchain can facilitate secure transactions among consumers for electricity trading. This is especially useful now as the adoption of distributed energy sources such as rooftop solar photovoltaic plants, smart meters and electric vehicles (EVs) continues to grow in the country.

World over, electricity utilities are undertaking pilots for peer-to-peer (P2P) energy trading based on blockchain technology. Some Indian utilities have also taken steps in this direction. For instance, Uttar Pradesh Power Corporation Limited (UPPCL) and BSES Rajdhani Power Limited (BRPL) are conducting or have conducted blockchain-based pilot projects. Both utilities have partnered with Australia-based technology company Power Ledger for their respective projects. VinodTiwari, head of business development and sales, Power Ledger, says, “Our blockchain-enabled trading platform is an innovative, market-based approach to incentivising the adoption of distributed renewable electricity resources in the country. It enables the removal of subsidies as well as mechanisms such as net metering and accelerates the deployment of rooftop solar through market-based sharing and trading of excess energy.”

Uttar Pradesh has emerged as one of the pioneers of blockchain implementation in the Indian power sector. In 2018, the Uttar Pradesh Electricity Regulatory Commission (UPERC) organised a workshop on the subject. In December 2019, it approved a pilot project for P2P transactions of power from rooftop solar systems using blockchain-based technology. The pilot project proposed by UPPCL and the Uttar Pradesh New and Renewable Energy Development Agency will check the feasibility of energy trading through blockchain for a distributed network of solar panels connected to a smart grid, wherein the authorities can track power generation and consumption.

Tiwari elaborates, “The pilot project will demonstrate the feasibility of the blockchain platform to trade energy from rooftops with solar power to neighbouring households and buildings. Initially, this will involve 10-15 government buildings in a regulatory sandbox environment. The results of the pilot project will be evaluated in order to formulate appropriate regulations to promote peer-to-peer trading of solar energy in the state. Overall, the project aims to make it easier and cheaper for businesses and households to choose energy from renewable sources. It is also hoped that it will provide a baseline from which further P2P projects can be implemented across India.”

The India Smart Grid Forum (ISGF) is collaborating with Power Ledger to implement the project. The project was expected to be completed by March 2020, but has been delayed due to the Covid-19 pandemic. UPPCL is currently selecting project sites, which will be followed by the installation of smart meters by the ISGF. The smart meters will transfer data to the Power Ledger platform to enable the project to go live by August/ September 2020 and real-time energy trading will commence soon after.

BRPL, which is one of the most technologically advanced discoms in the country, also undertook a P2P-based solar power trading pilot project in November 2019. The trial project with 300 kW of solar capacity covered a select group of consumers in gated communities of Dwarka in Delhi. These consumers were able to trade solar power with their neighbouring apartments and buildings using the blockchain platform rather than letting it spill back into the grid. About 25 MWh of electricity was traded among the peers, accounting for a share of 40 per cent in total transactions.

BRPL has also collaborated with Power Ledger for the project. Commenting on the tie-up, AmalSinha, CEO, BRPL, said in an official release, “BSES has been embracing emerging technologies, especially in the space of demand-side management and renewables. This partnership is yet another testimonial to these efforts. Realising the importance of distributed generation, we have already built an extensive renewables infrastructure, and this trial with Power Ledger will help us fully utilise that energy. Basis the outcome, BRPL and Power Ledger will expand the trial to include blockchain-enabled solutions for group net metering, virtual net metering, EV charging and virtual power plant applications in the near future.”

Elaborating on the benefits of the project, Tiwari says, “The desktop trial demonstrated the benefits of various scenarios for localised energy trading where residents with rooftop solar infrastructure were able to trade their excess energy with their neighbours as well as with the high tariff commercial and industrial customers, minimising the amount of energy that was spilled back into the grid.” 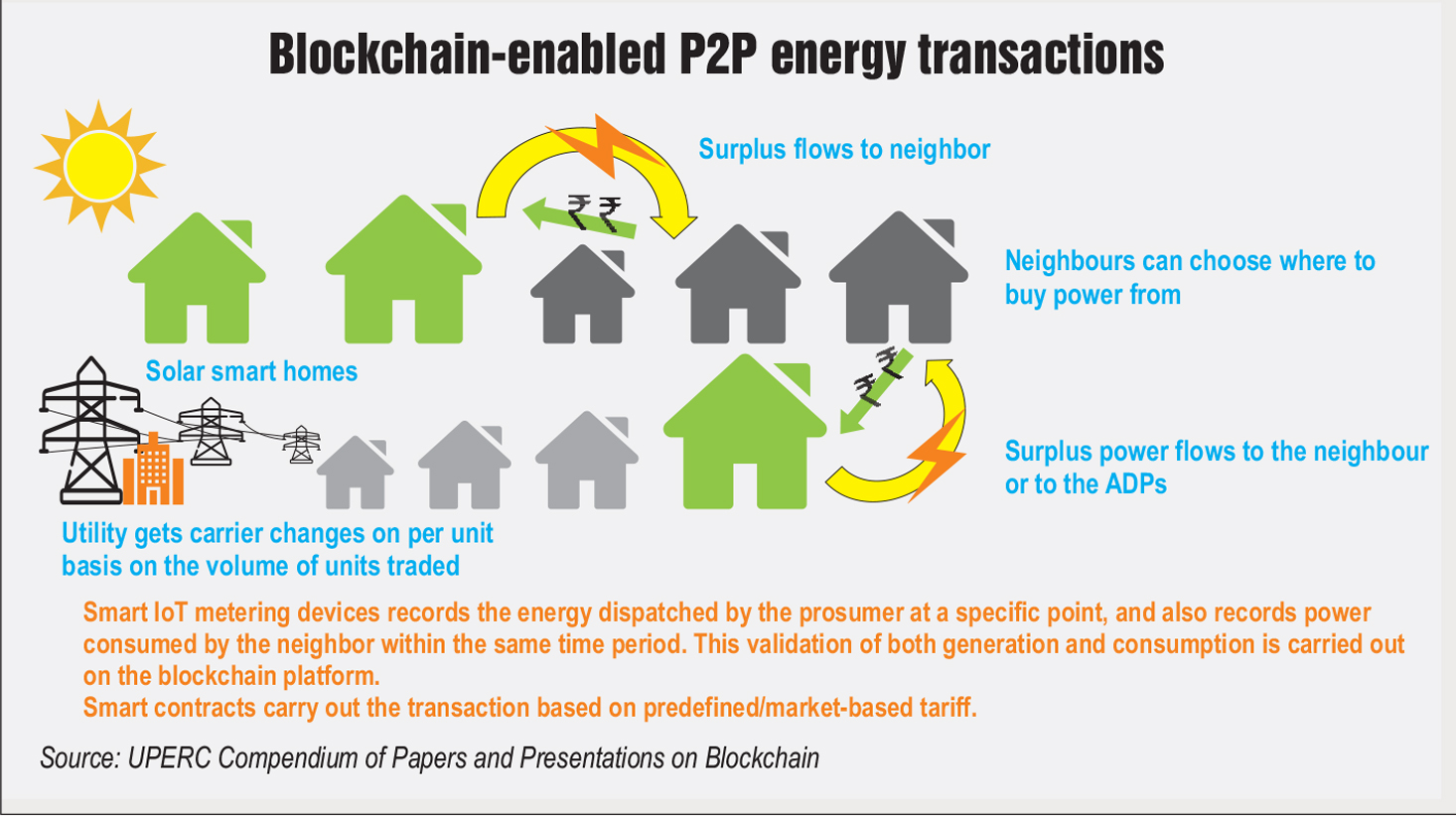 The benefits of blockchain P2P energy trading are aplenty and utilities across Australia, Thailand, Japan, the US, Malaysia, France and Austria are deploying it. It provides an attractive opportunity to consumers with rooftop solar PV plants to monetise their investment as they can sell surplus electricity to neighbours. Even people who do not have installed rooftop capacities can procure power through P2P energy trading, thereby consuming greener power at cheaper rates vis-à-vis discom tariffs. A key feature of the blockchain platform is that it does not require any specific hardware device or investment but smart meters are a prerequisite as the technology utilises near-real-time data to facilitate P2P trading.

For discoms too, P2P trading of surplus solar power among consumers connected to the same distribution transformer can facilitate optimal loading of the distribution transformer, resulting in better efficiency and reliability of supply in the area. It can also help the discom better manage peak demand and balance load in an effective manner. The discom does not need to mandatorily procure solar energy exported to the grid, and earn additional revenues through transaction fees and wheeling charges.

As per the UPERC, the technology has the potential to enable direct consumer engagement with the decentralised grid, flatten the hyperlocal demand curve with support from local ancillary services, ensure efficient billing and settlement amongst peer groups, and promote the use of renewable energy. The technology provides multiple benefits for utilities, prosumers and consumers such as real-time trustworthy transaction records, lower transaction costs and transparency in the power system.

Besides trading of decentralised renewable energy, blockchain P2P technology encourages EV adoption by facilitating sharing of private charging infrastructure among consumers. At the Global Blockchain Congress held in Kolkata in December 2018, TERI demonstrated that blockchain-based application can enable consumers to share their private EV chargers with other EV customers near their premises, thereby increasing the utilisation of chargers and helping in the recovery of the high upfront cost incurred in setting up the chargers. Based on the P2P mode of communication, EV owners near a charging station can search for stations to charge their vehicle’s batteries. EV charging station owners that can be registered on blockchain-based smartphone apps will be a part of a public directory and can make their charging stations available to the public when they are not using them. In return, they can be incentivised through set protocols.

Notably, TERI has also developed a blockchain-powered prototype to promote P2P transactions of solar energy in association with Noida-based start-up Sofocle Technologies Limited. The prototype is expected to be utilised in a field pilot with a distribution utility or an institutional campus with smart meters.

Blockchain-based P2P trading is set to grow in the future. Given the country’s aggressive renewable energy targets and a consistent push towards e-mobility, the technology can help consumers, especially residential ones, adopt rooftop solar solutions and EVs. Tiwari says, “India is a long way behind in its rooftop solar installation target of 40 GW by 2022, but blockchain technology can help the country progress more quickly on its renewable energy pathway.” Power Ledger is already in discussion with several discoms (private as well as state owned), regulators, renewable energy developers, energy trading companies, energy research institutes and smart cities in the country.

Since the power sector in the country is highly regulated, policymakers will play a key role in realising the potential of blockchain technology. There is a need for policymakers and regulators to be aware of the potential, opportunities and issues (related to security) of blockchain in the power sector so that appropriate regulatory frameworks and technical standards can be developed. With the roll-out of smart prepaid meters in the next three years, the market is ready for implementing associated technology solutions like blockchain to elevate the power sector’s digitalisation and decentralisation to the next level.