Smart meter adoption is an integral part of the modernisation efforts in the power distribution segment. Smart meters play a key role in aggregate technical and commercial loss reduction, renewable energy integration, demand forecasting, load management and energy conservation. They provide a host of other benefits to utilities as well such as increased billing and collection efficiency, enhanced discom revenue, and management of power theft and meter tampering. The deployment of smart meters has received a significant policy push in recent years under various government schemes including the Integrated Power Development Scheme (IPDS), the Ujwal Discom Assurance Yojana (UDAY) and the Smart Meter National Programme (SMNP). As of August 5, 2020, a total of 1.79 million smart meters have been installed in the country under various government schemes and programmes. Notably, the government has urged states to replace electricity meters with smart prepaid meters over the next three years. This is expected to create a demand for around 300 million smart prepaid meters in the coming years.

Smart meters, offering remote monitoring and reading facilities, have come as a major relief for discoms during the lockdown following the Covid-19 pandemic. Smart meters have made it possible for discoms to achieve around 95 per cent billing efficiency amidst the lockdown, besides increasing their monthly revenue per consumer by almost 15-20 per cent. Apart from this, smart prepaid meters have offered significant benefits to utilities during the Covid-19 lockdown. Bihar is the first state in the country to install 25,000 smart prepaid meters. During the lockdown, consumers have been recharging their prepaid smart meters for an average of Rs 20 daily, translating into a daily recharge revenue of Rs 500,000.

One of the key government schemes for the installation of smart meters is the SMNP. Being implemented by Energy Efficiency Services Limited (EESL), the SMNP aims to replace 250 million conventional meters with their smarter versions. This is expected to significantly improve the billing and collection efficiencies of discoms and increase their revenues by about Rs 600 billion. To roll out the smart meter initiative, EESL is utilising its proven model of bulk procurement, aggregation of demand and monetisation of savings. It is based on the build-own-operate-transfer model wherein EESL receives a nominal internal rate of return, which is reflected in a mutually agreed automated payback structure. Under this programme, a total of 1.39 million smart meters have been installed so far.

As of December 2019, EESL has signed MoUs with eight states/union territories for the implementation of the scheme. These are Uttar Pradesh, Haryana, New Delhi (New Delhi Municipal Council), Bihar, Rajasthan, Arunachal Pradesh, Andaman & Nicobar Islands and Andhra Pradesh. Besides this, Tamil Nadu, Chhattisgarh, Daman & Diu, and Tripura are likely to join the programme soon. So far, EESL has issued three tenders for the procurement of 5 million smart meters each. The first tender, on behalf of the Uttar Pradesh and Haryana utilities, was awarded to ITI Limited. The second, on behalf of Bihar and Andhra Pradesh, was secured by the French integrated electricity company Électricité de France S.A. The third tender was issued in July 2019 for the installation of 5 million meters across the country. Recently, in April 2020, EESL announced that it has successfully closed the request for proposal of 5 million smart meters worth Rs 13 billion amidst the lockdown.

Development under other schemes

In November 2019, EESL also tied up with the National Investment and Infrastructure Fund, which manages the sovereign wealth fund of India, to establish a special purpose entity, IntelliSmart Infrastructure Private Limited. The vision behind this move was to make IntelliSmart the biggest system integrator in the country, which will provide high quality service during the transition period, at a very affordable rate.

Another government scheme that has smart metering as one of the key focus areas has been UDAY. Under UDAY, the aim was to install smart meters for all customers with a monthly electricity consumption of more than 500 units by December 31, 2017 and for those with a consumption of 200-500 units per month by December 31, 2019. For consumers with energy usage above 500 kWh per month, the scheme aims at installing 5.7 million smart meters (6 per cent of the target has been achieved as of August 2020), while for those with a monthly consumption of 200-500 kWh, the programme targets the deployment of 18.4 million smart meters (8 per cent of the target achieved). While UDAY’s term has expired, a new scheme, the Atal Distribution System Improvement Yojana, is in the works, and smart metering is expected to remain one of the key focus areas of the government.

Apart from UDAY, smart meters with supervisory control and data acquisition systems are being installed in all urban areas under the IPDS. Under the IPDS, smart metering projects have been approved by the Ministry of Power (MoP) to utilities/states on the basis of the improvement in UDAY performance parameters. The states have prepared detailed project reports either on capex or a combination with revenue recovery model and can either procure them on a stand-alone basis or through an aggregator such as EESL or PFC Consulting Limited. IPDS funding of 60 per cent (85 per cent for special category states) is admissible only for the capex portion (that is, cost of smart meters, head-end system and communication equipment), limited to a maximum of Rs 2,000 per node. A total of 4.3 million smart meters have been sanctioned under the programme across 333 towns, of which 131,946 meters have been installed. A project cost of Rs 8.34 billion and a government grant of Rs 5 billion have been approved for smart metering under this scheme. As of August 2020, a government grant of around Rs 74.3 million has been released for smart metering under the IPDS. 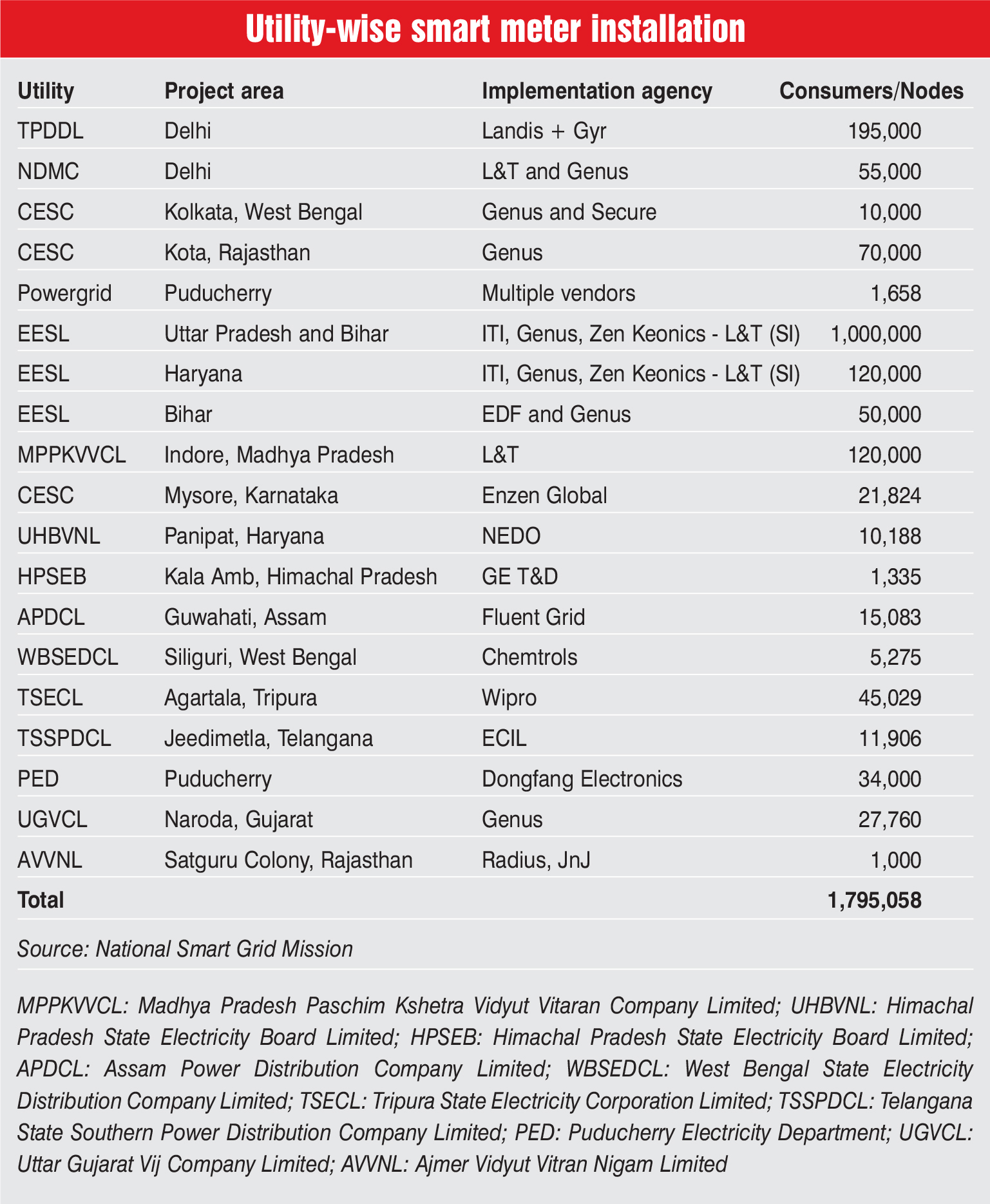 A host of issues and challenges have been hindering widespread deployment of smart meters. A key challenge has been the integration of the data that comes from smart meters to the head-end system (hardware and software that receives the stream of meter data) to the meter data management system and then the legacy billing and collection software. Another concern has been the supply of smart meters in such huge numbers. The supply, however, has now improved considerably. At present, there are six to seven meter manufacturers that have received certification from the Bureau of Indian Standards. Another formidable challenge has been the recent countrywide lockdown due to the Covid-19 pandemic, which is likely to seriously impact the timeline for installing smart meters. However, it is expected that once the situation returns to normal, smart meter deployment would take place at a faster pace. n