The lack of right of way (RoW) is perhaps the most pressing, long-standing problem for transmission system developers. While developers have taken steps to overcome RoW challenges by deploying advanced design and technology options for towers and transmission lines, little has happened on the policy front to mitigate industry concerns. It is estimated that about 90,000 ckt. km of under-construction transmission lines (over 220 kV and above) are currently facing RoW issues. It is not unusual for transmission lines/projects to be entirely dropped owing to RoW issues. The situation certainly does not augur well for a country that is planning significant renewable energy capacity addition in the near term, which requires expeditious commissioning of transmission projects for the smooth evacuation of green power.

While the Ministry of Power (MoP) had issued guidelines for the payment of compensation towards damages with regard to RoW for transmission lines in October 2015, the decision regarding their adoption was up to the state governments since land acquisition is a state subject and a large number of states have not adopted the guidelines. Subsequently, in July 2016, a committee under the chairmanship of the additional secretary, MoP, was constituted to analyse the RoW issues in urban areas and suggest a methodology for the payment of compensation. The committee submitted its report along with recommendations after deliberation with the state governments. In line with these recommendations, the MoP has recently issued guidelines for determining compensation for acquiring RoW in urban areas as stipulated in sections 67 and 68 of the Electricity Act, 2003, and sections 10 and 16 of the Indian Telegraph Act, 1885. This will be in addition to the compensation towards normal crop and tree damages. Power Line takes a look at the latest guidelines…

As per the committee’s recommendations, the compensation for damages with regard to RoW in urban areas will be 85 per cent of the land value as determined by the district magistrate or other relevant authority based on the circle rate/guidance value/stamp rates for the tower base area impacted severely due to the installation of a tower/pylon structure. Further, the compensation for the diminution of land value due to the laying of transmission lines would be decided by the states depending on the category of land, subject to a maximum of 15 per cent of land value as determined by the circle rate.

In addition, the guidelines provide for a non-usability allowance of up to 15 per cent of the land value for the width of an RoW corridor in the notified urban areas since no construction activity will be permitted in that corridor. The MoP has also reduced the RoW width by 7-27 per cent for calculating the compensation in urban as well as forest areas (see Table). For compensation purposes, the width of the RoW corridor will not be more than that prescribed in the table.

Notably, the payment of compensation in urban areas would be one-time and upfront. It may be made through digital modes such as Aadhaar-enabled payment system and united payment interface, as per feasibility. Further, it must be noted that the compensation guidelines are applicable only to transmission lines supported by a tower base of 66 kV and above. 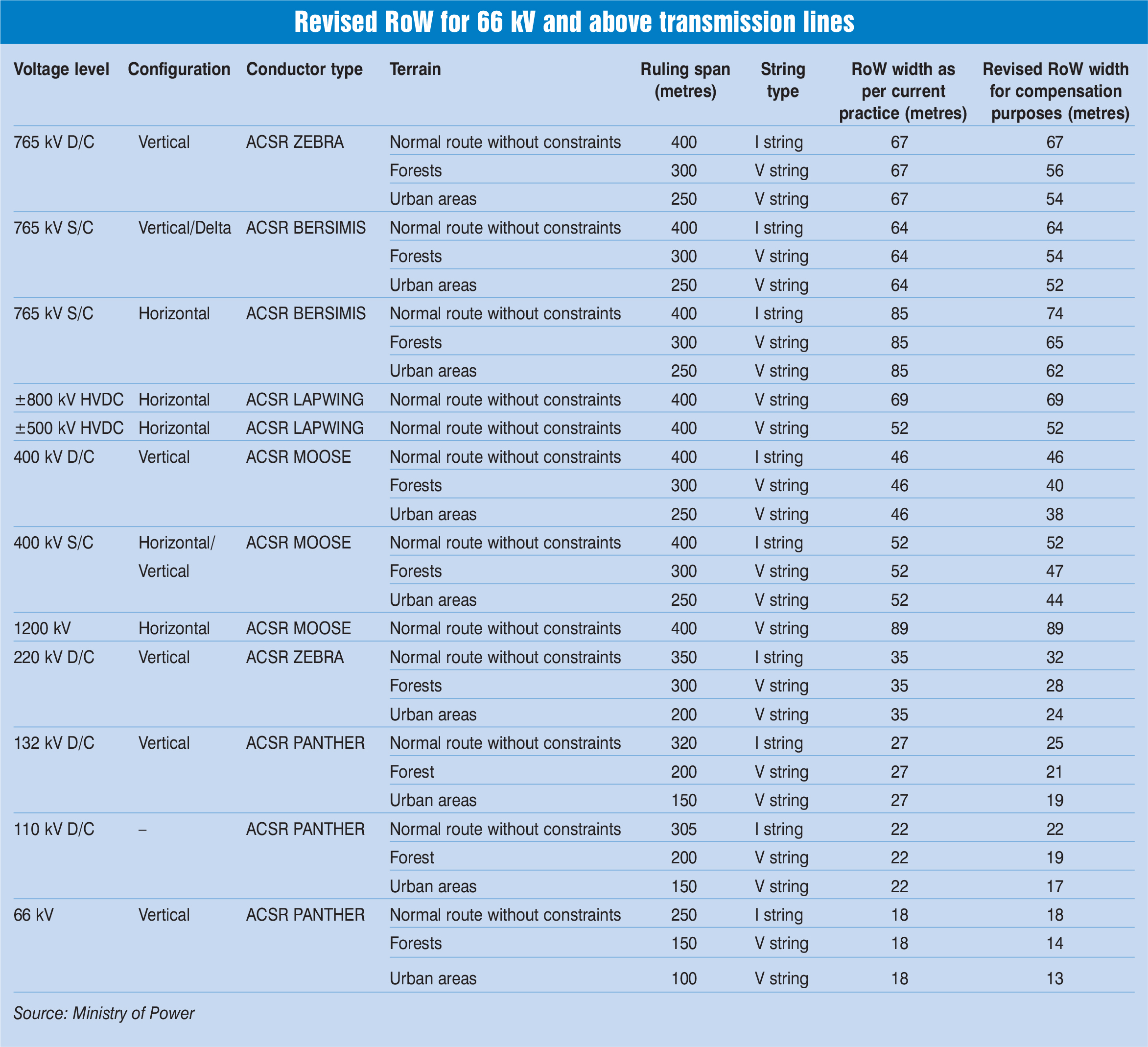 The recent guidelines are indeed a positive step towards the resolution of RoW issues that are impeding transmission line development in urban areas. However, the final decision of implementing these guidelines rests with the state governments. It is, therefore, necessary for the states to come forward and support developers in addressing RoW issues. This requires urgent attention as transmission project completion deadlines have been compressed to nearly 18 months as against 36 months in the past in order to match the commissioning schedule of renewable energy projects.

While technology can be used to mitigate certain issues, advanced technological options cannot be deployed across all projects. For instance, developers have faced challenges in the construction of transmission lines with monopole structures due to high costs, difficulty in transportation, increase in the number of poles with the reduction in design span, special design consideration for multicircuit towers, and limited manufacturing facilities for monopoles.