Over the years, complexities involving the environmental clearance process for power projects, especially hydro, have remained a key matter of policy discourse and are often cited as one of the most challenging aspects in timely execution of projects.

The environmental clearance process could now be in for an overhaul. In March 2020, amidst the lockdown, the Ministry of Environment, Forest and Climate Change (MoEFCC) issued the draft Environment Impact Assessment (EIA) 2020 notification. (The EIA is one of the key assessment reports that a project proponent has to submit for obtaining environmental clearance for a project.) The changes proposed in the notification include, among other things, reducing the time allowed for public comment on assessments, allowing post-facto project clearance, removal of several activities from the purview of public consultation, allowing exemptions for projects with strategic consideration, and providing relaxations for expansion and modernisation of existing plants.

According to the government, the draft notification is being brought in to promote ease of doing business by reducing delays in approving project applications and licences, and to make the clearance process more transparent and expedient.

Power Line takes a closer look at the green clearances-related challenges that the sector faces, the proposed policy changes and the way forward for expediting green approvals…

Over the years, the progress of many projects has been affected on account of delays and non-clearance relating to environmental and forest aspects. According to the Central Electricity Authority (CEA) data on upcoming hydropower projects, as of June 2020, there were almost 19 GW of projects that had been concurred by the CEA for which environmental and forest (E&F) clearances were pending (see Table).

For instance, works on NHPC’s Teesta IV project have not started despite the detailed project report (DPR) being cleared in 2010. While deposing before a parliamentary panel in 2019, an NHPC official expressed his dissatisfaction at the lack of progress made by the project and contrasted it with another project in Bhutan. “It is a coincidence that the Mangdechhu project in Bhutan, which was also appraised in 2010, is already done and is going to be commissioned very soon whereas Teesta IV has not started. And the reason for that is we could not get the requisite clearances in time and nor could the FRA be done,” he stated.

Even if the requisite clearances are accorded, the option of judicial recourse and filing a litigation petition with the National Green Tribunal (NGT) is always available to activists, leading to costly delays and time overruns for hydro developers. A prime example is the 2,000 MW Subansiri hydropower project in Assam. The project lies on the border of Arunachal Pradesh and Assam and when commissioned, it will be one of the biggest hydro projects in the country. Environmental clearance for the project was given by the MoEF in 2003. However, the project was stalled by local pressure groups in December 2011, following which the case was taken to the NGT. The NGT heard the case for two years and gave its decision in 2017. On October 16, 2017, the tribunal, in a detailed judgment, noted that neither the project nor the environmental clearance was under challenge; the only challenge was regarding safety and the downstream impact during the course of operation of the project.

More recently, in April 2020, the NGT sought the response of the centre and Nuclear Power Corporation of India Limited (NPCIL) on a plea challenging the grant of environmental clearance to the Kaiga atomic power project in Karnataka. The petitioner challenged the validity of the grant of environmental clearance by the MoEFCC in August 2019 for expansion of the capacity of Kaiga Units 5 and 6 from 235 MWe to 700 MWe each.

Developers complain that the delays in clearances have dampened the spirit of liberalisation, leading to red tapism. “Private developers have invested millions of rupees in doing investigations and preparing DPRs, and in the end they are unable to get clearances,” notes M.M. Madan, adviser, National Council of Power, ASSOCHAM, who was closely involved with the 3,097 MW Etalin hydro project in Arunachal Pradesh. The project was cleared during public hearing and placed for environmental clearance in 2015. However, the clearance process did not move forward and instead the authorities required a basin study to be undertaken before clearance could be accorded. The study took one and a half years. It was subsequently recommended as a “doable” project and in 2017 it was placed for issuing Stage I clearance after the developer agreed to the conditions of the basin study. The project, however, got stuck again over wildlife issues owing to tiger presence in the project area. Finally, in a project monitoring group meeting, Etalin was considered as one of the seven doable projects by the Ministry of Power and regular monitoring was undertaken. In July 2019, the Wildlife Institute of India study report was received, which favoured the project. Now, the forest committee has constituted a subcommittee to revisit the project to see how much land can be curtailed for the project. “If the government is not interested in building hydro, it should say so clearly and not waste the money of developers,” notes Madan.

It is not just hydro but coal mining projects too that get stuck due to environmental clearance issues. As per industry estimates, close to 20 clearances, including E&F clearances, are required before mining can begin, and the approval process is tedious. On an average, environmental and forest clearances take 270 and 530 days respectively at present. In its annual report for 2019-20, Coal India Limited states that it has 123 coal projects costing Rs 200 million and above that are at different stages of implementation, of which 69 projects are on schedule and 54 are delayed. The major reasons for the delay in implementation are challenges in obtaining forest clearance, possession of land and issues relating to resettlement and rehabilitation (R&R). 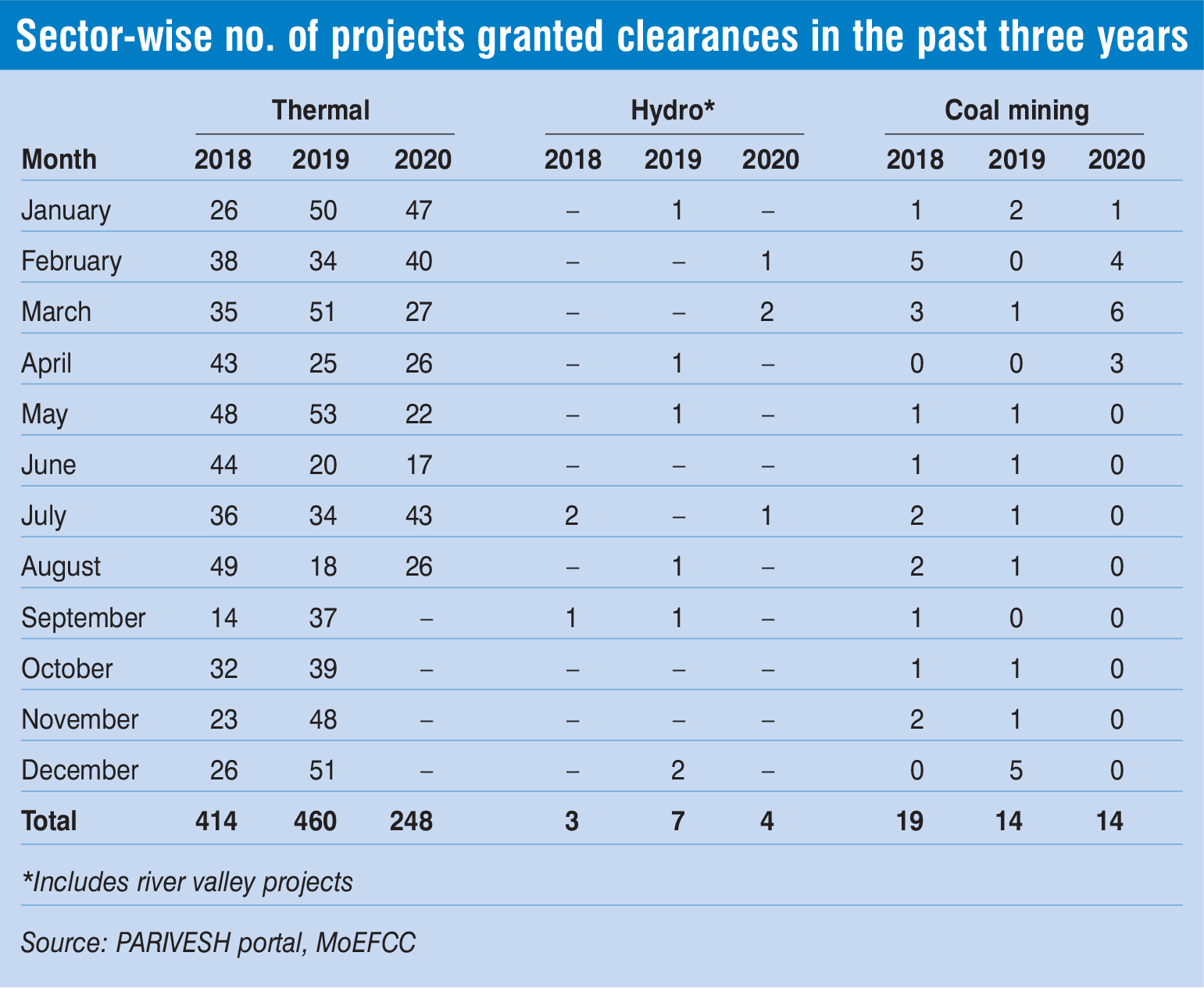 Under the Environment (Protection) Act, 1986, India notified its first EIA norms in 1994, putting in place a legal framework for regulating activities that access, utilise and affect (pollute) natural resources. Ever since, every development project has been required to go through the EIA process and obtain prior environmental clearance.

The 1994 EIA notification was replaced with a modified draft in 2006. According to the 2006 notification, projects are categorised based on their size and scale, and accordingly require different clearance processes. As per the classification, Category A projects are screened, scoped and appraised at the central level by the MoEFCC’s Expert Appraisal Committee (EAC) while Category B projects are evaluated by the State Environmental Impact Assessment Authority (SEIAA). Thermal power plants of 500 MW and above, nuclear power projects, hydropower projects above 50 MW and coal mining projects (above 150 hectares) fall in Category A. Smaller projects such as river valley projects below 50 MW and solar-thermal projects are categorised as Category B projects. Category B is further categorised into B1, which requires an EIA report, and B2, which does not require such a report. 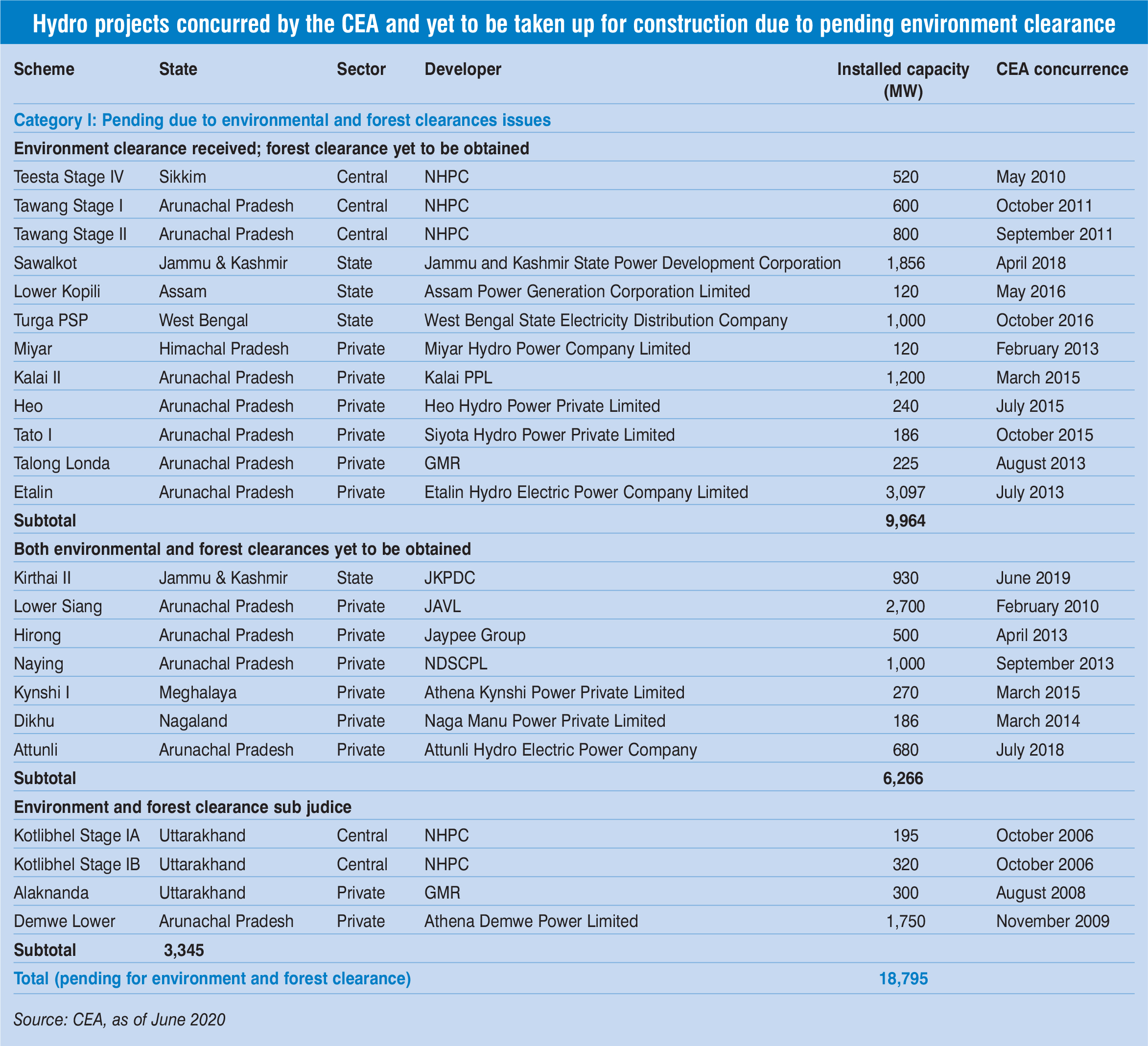 The draft EIA 2020 has become a contentious issue as, according to environmentalists and activists, the draft will significantly dilute the EIA process and projects could now escape environmental scrutiny.

One of the changes proposed in the draft EIA 2020 is to exclude Category B2 projects (small thermal projects, hydro projects of less than 25 MW, etc.) from the purview of both public consultation and the appraisal committee. The notification also proposes to exempt those projects involving strategic consideration from public consultation. Strategic projects could imply projects critical to the policies framed by the government. The draft notification does not define the word “strategic consideration” and leaves it to the determination of the central government. It also states that projects that propose an expansion of under 25 per cent do not need to undergo an EIA or public hearing.

Importantly, the draft proposes to reduce critical timelines. The notice period for public hearing has been cut from 30 days to 20 days. Similarly, for project modernisation and expansion, the norms state that only those projects that involve more than 25 per cent increase would require an EIA, and those that involve over 50 per cent would attract public consultation. The validity period of the environmental clearance has been increased for mining, river valley and other projects. Another change is the power to retroactively regularise projects that have been constructed in violation of environmental norms. As per the draft notification, industries can commence operations without seeking environmental clearance, and simply pay a penalty. The draft notification undermines the orders of the NGT, which explicitly ruled against post-facto approvals.

The 2006 notification mandated that a project compliance report be filed every six months. This has now been extended to once a year. The 2020 EIA notification excludes reporting by the public of violations and non-compliance. Instead, the government will take cognisance of reports only from the violator-promoter, the government authority, appraisal committee or regulatory authority. This proposal has drawn ire from environmentalists in view of the recent incident at Reliance Power’s ultra mega power project (UMPP) in the Sasan area of Singrauli, where the fly ash dyke collapsed, causing damage to life in the adjoining village. Earlier, in August 2019, a similar breach of the ash dyke of the Essar power plant in Mahan had caused a major loss of crop and damage to houses in adjoining villages. 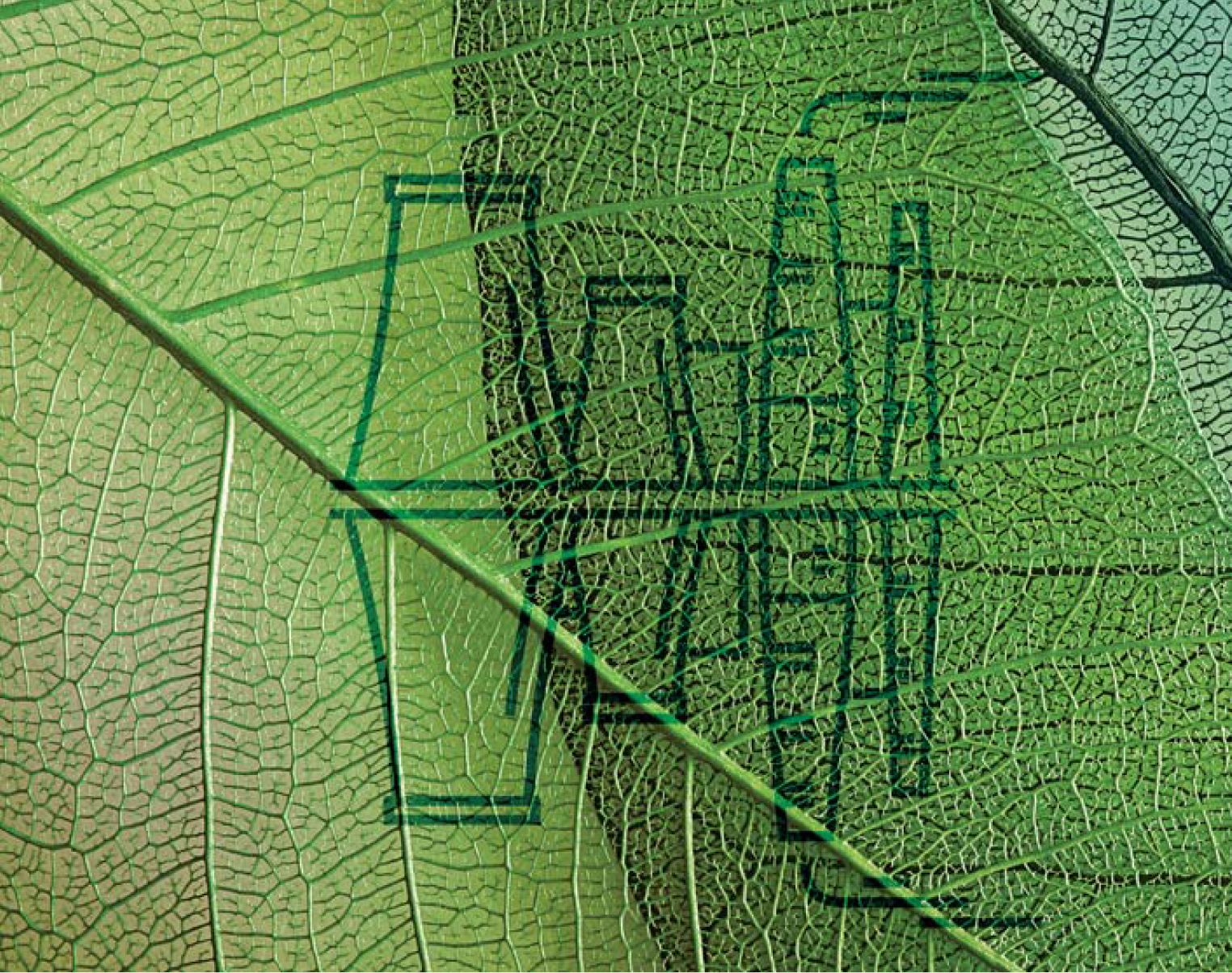 In recent years, various measures have been taken that support a more pro-business position. The process of granting environmental clearances has now become simpler as the ministry claims it has reduced the number of days taken to complete the procedure from 640 days to 108. For instance, one of the key steps to fast-track proposals in the recent past has been the launch of a single-window hub, PARIVESH, by the MoEFCC for online submission, monitoring and management of environmental clearances. Also, in a move being seen as industry friendly and aimed at reducing paperwork, during the lockdown, the MoEFCC has been examining environmental clearances in virtual meetings (more than 190 projects have been discussed or cleared far).

However, more can be done. A 2019 report of the Parliamentary Standing Committee on Energy noted that three types of clearances – environment, forest and wildlife – from three different wings of the environmental ministry are needed and that makes the “whole process very cumbersome, which would otherwise be easier and less time consuming”. It said “there is a need to strike a balance between development and the environment as both are important for the country” and hydropower projects should be developed only after due consideration and assessment of their impact on the environment and the ecological system. However, the committee stated that during such consideration, the “net effect” of hydropower projects on the environment should be taken into account, highlighting that the net effect of these projects has always been positive for the surroundings in terms of groundwater recharge, flourishing of flora and fauna, flood mitigation, availability of water for various purposes, etc. The committee also called for setting up a special cell that would monitor and expedite matters pending in the Supreme Court and the NGT.

So, will the EIA changes help expedite project implementation? Experts note that the draft EIA has reduced the space for public participation, as well as relaxed the requirement for clearances. While these are contentious issues for environmentalists and their concerns will need to be addressed, for developers, it should help ease the clearance process and expedite project implementation.

The environment ministry’s deadline for public feedback on the draft EIA 2020 notification ended on August 11. The ministry has reportedly received an estimated 1.7 million comments from the public on it. The final rules will be keenly awaited.