The operational performance of power utilities remained tepid during the past year. Power demand had been falling since August 2019 as a result of shrinking industrial production, and the shutdown of commercial and industrial (C&I) activities due to the Covid-19-induced lockdown in March-April 2020 further affected demand. The decline in power consumption was also reflected in the low utilisation levels, measured by the plant load factor (PLF), of thermal power plants (TPPs). The average PLF of TPPs declined to 49.47 per cent in the month of October 2019, and hit an all-time low of 48.46 per cent (tentative) during the April-August 2020 period, mainly owing to the Covid-19 lockdown.

Meanwhile, the majority of state transmission utilities fared well in the past year, reporting a decline in transmission losses. Aggregate technical and commercial (AT&C) losses of discoms reduced, although they are still above the targeted level of 15 per cent in most states.

Of the 34 utilities tracked by Power Line Research during 2019-20, nine reported an increase in PLF over the previous year. The highest PLF (at 95.85 per cent) was reported by Sasan Power Limited (SPL), which operates the 3,960 MW Sasan ultra mega power project in Madhya Pradesh, followed by Singareni Collieries Company Limited (SCCL) with a PLF of 87.54 per cent. SCCL operates the 1,200 MW Singareni TPP in Telangana.

At the state level, SCCL was the best performing utility with 87.54 per cent PLF during 2019-20, which is well above the average state sector PLF of 50.24 per cent as well as the national average. Telangana State Power Generation Corporation Limited was the second best performing state utility with a PLF of 70.66 per cent, followed by Tenughat Vidyut Nigam Limited (TVNL) with a PLF of over 65.61 per cent and CSPGCL with a PLF of 65.54 per cent during 2019-20. Only three state utilities – SCCL, TVNL and Andhra Pradesh Power Development Company Limited – recorded an increase in PLF during 2019-20 vis-à-vis 2018-19 and the rest reported a decline or maintained generation at the the previous year’s level. Meanwhile, the biggest drop in PLF was reported by Odisha Power Generation Corporation Limited. The PLF declined by 27.29 percentage points from 83.86 per cent during 2018-19 to 56.57 per cent during 2019-20. Both Gujarat State Electricity Corporation Limited and Madhya Pradesh Power Generating Company Limited reported a decline in PLF by over 20 percentage points. 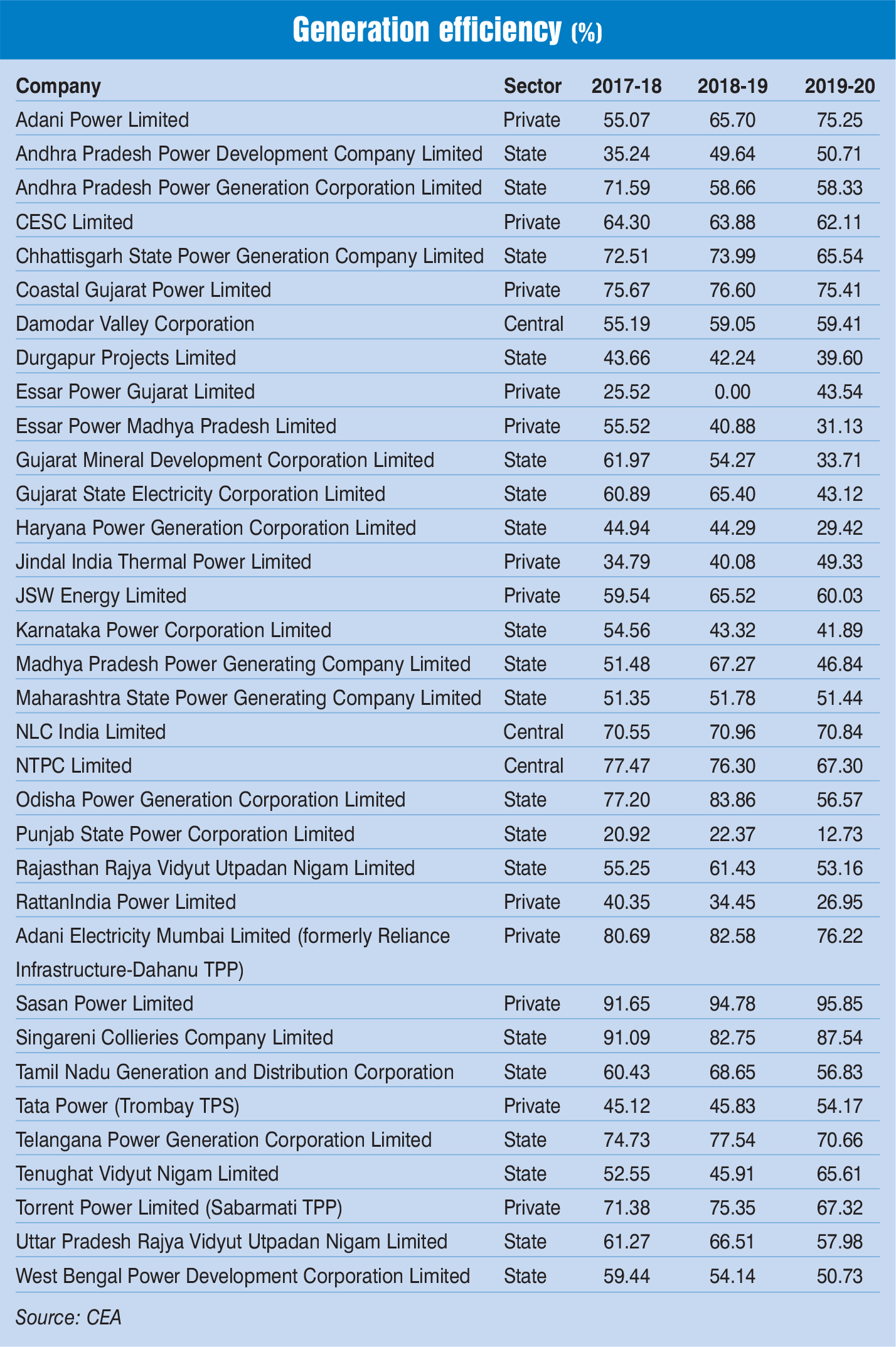 The  majority of transcos reported losses in the range of 3-4 per cent including state utilities of Assam, Bihar, Chhattisgarh, Gujarat, Karnataka, Kerala, Maharashtra, Odisha, Rajasthan, Tamil Nadu and Uttar Pradesh. The transco with the highest loss of 4 per cent was the Meghalaya Power Transmission Corporation. 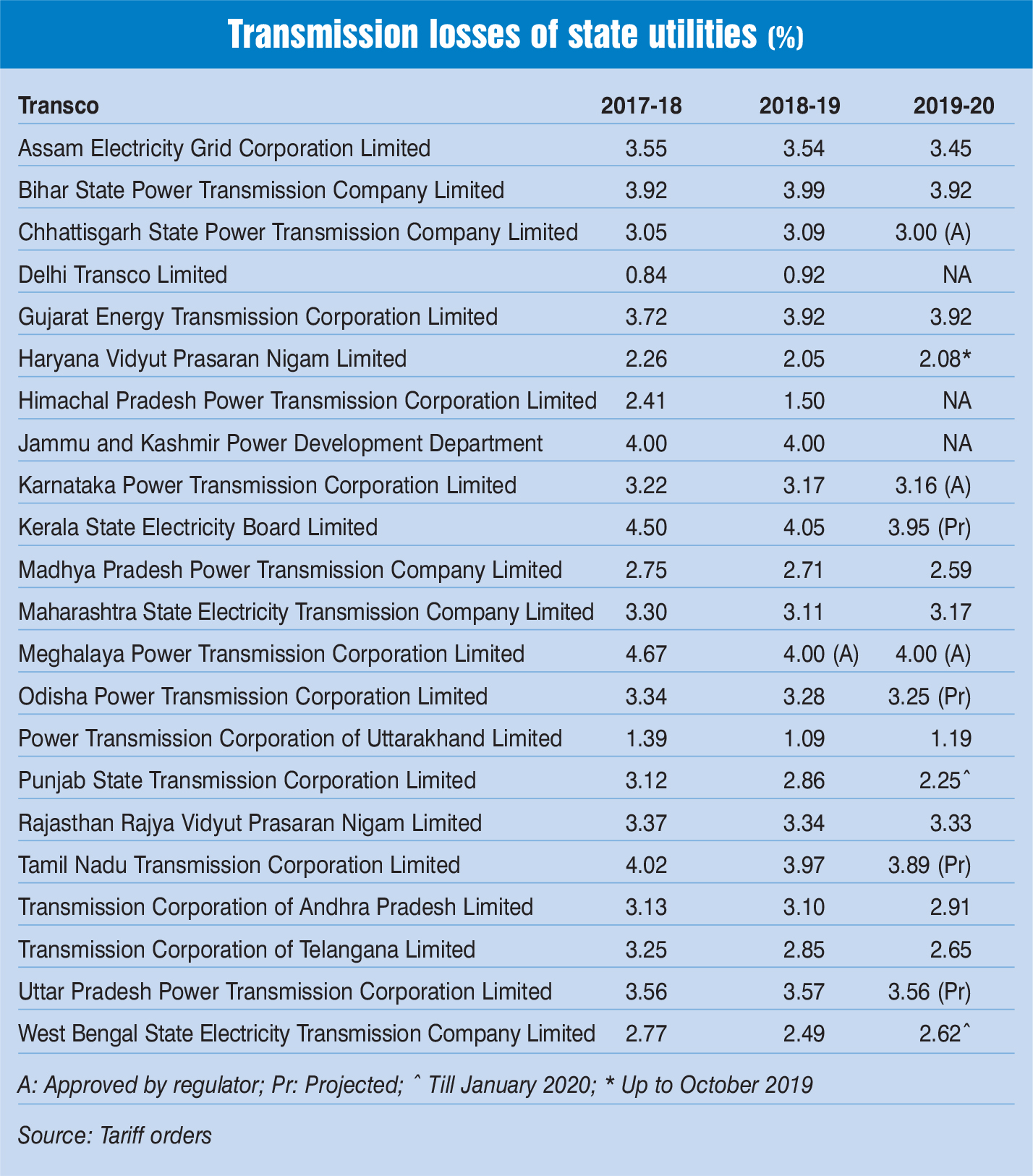 Meanwhile, private sector discoms continued to report a steady performance with losses of less than 10 per cent over the past couple of years. Tata Power Mumbai’s AT&C losses during 2019-20 were less than 2 per cent. BSES Yamuna Power Limited’s (BYPL) AT&C losses stood at 8.65 per cent in 2019-20, declining from 10.36 per cent during 2018-19; although TPDDL’s AT&C losses increased marginally from 7.89 per cent to 7.93 per cent. The AT&C loss for India Power remained constant at 3 per cent. The other private discoms (which reported T&D or distribution losses during the review period) also improved their performance during 2019-20. The distribution losses of Torrent Power-Surat (3.64 per cent) and Adani Electricity Mumbai (7.37 per cent) were lower than those in 2018-19, while the of BSES Rajdhani Power Limited (BRPL) (9.5 per cent) and Torrent Power-Ahmedabad (6.7 per cent) increased slightly over the past year. 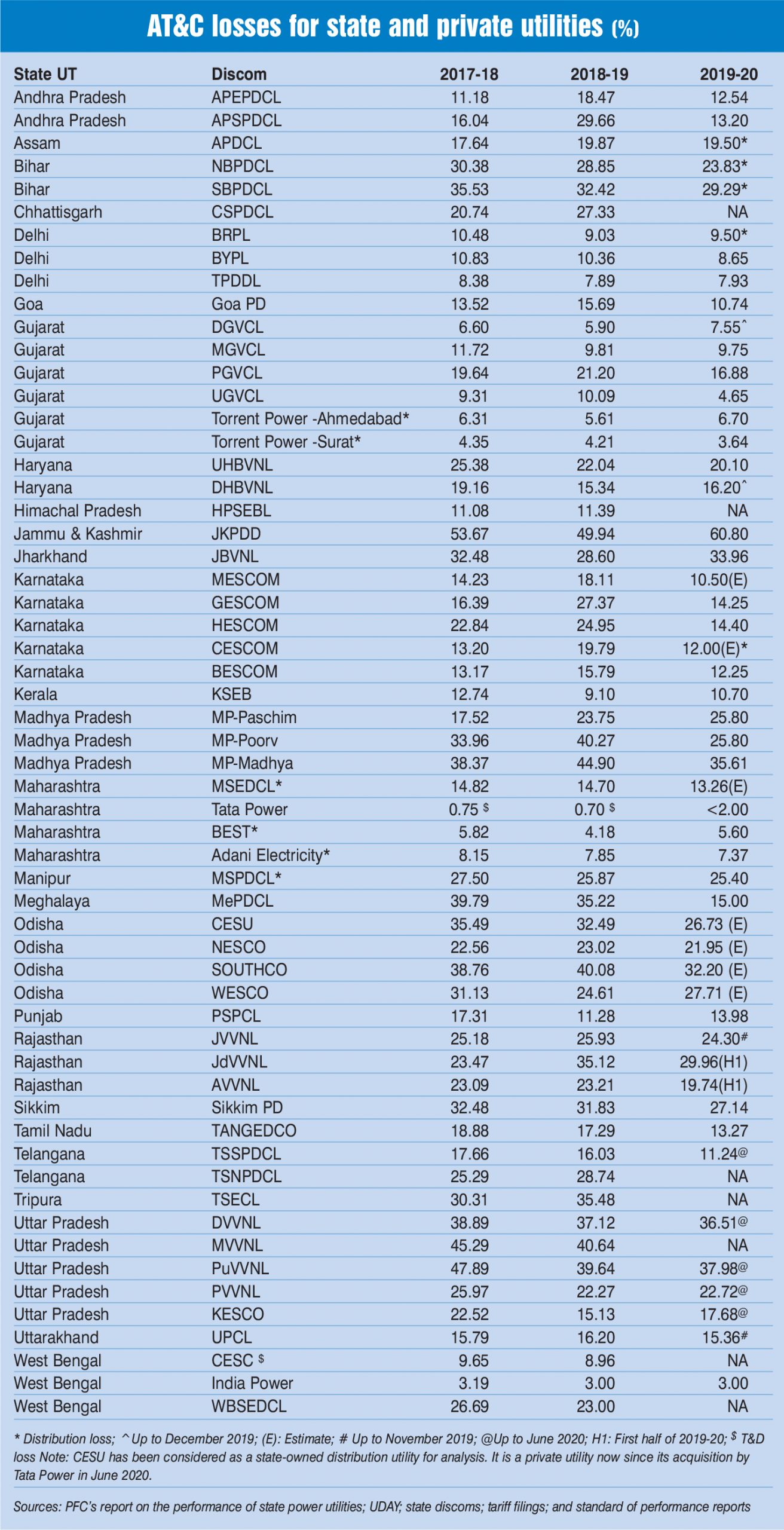 Overall, power utilities have seen a downturn in their operational performance as a result of Covid-19. The generation segment has been further weighed down by low power demand. Electricity distribution was already the weakest link in the electricity value chain, plagued by low collection and billing efficiency. The pandemic has further aggravated its woes owing to liquidity constraints and a dip in revenue collection. However, the government’s proactive measures, such as the Rs 900 billion liquidity infusion package to discoms under the Atmanirbhar Bharat Abhiyan, have lent some support to the sector in these difficult times. The move to privatise discoms in union territories is another step in the right direction and would encourage more state discoms to look at privatisation for improving operational performance.