However, the country is faced with an ageing grid and a growing number of coal power plant closures, without clear and sustainable replacements. The draft Integrated System Plan 2020 released by the Australian Energy Market Operator (AEMO) estimates that more than 30 GW of large-scale renewable energy capacity is needed to replace coal-fired generation in the next 20 years, with 63 per cent of Australia’s coal-fired generation set to retire by then (by 2040). In addition, about 21 GW of new despatchable resources are required to back up renewables. To sustain the long-term benefits of renewable energy and ensure that it forms a major part of the despatchable resources, Australia’s energy policy calls for increased adoption of energy storage systems.

In particular, large-scale battery storage is set to play a crucial role in creating a reliable energy system and supporting the rapid deployment of variable renewable energy sources.  The country is making significant progress at the household level, with about 22,661 batteries installed in 2019, taking Australia’s household storage capacity past 1 GWh for the first time ever.

Australia’s National Electricity Market, which connects six major transmission interconnectors, represents about 90 per cent of the Australian electricity market and comprises six jurisdictions – Queensland, New South Wales (NSW), the Australian Capital Territory, Victoria, South Australia and Tasmania. In particular, the territories of Victoria, Queensland and South Australia have been the leaders in the journey to storage.

All energy storage technologies have in common the ability to store energy for an extended period of time and then despatch it when it is needed. The two most common forms of energy storage picking up pace in Australia are battery energy storage systems (BESSs) and pumped hydro.

Battery storage assists in smoothing out solar photovoltaic (PV) output and integrating other intermittent renewable generation into the grid, and provides ancillary services for the grid. It is also being used for peak-shaving, wherein users charge their battery at night and use the stored power to satisfy a portion of their peak power demand at other times.

The fastest growing form of battery storage in Australia is the lithium-ion battery. The AUD 90 million Hornsdale Power Reserve (Tesla big battery system) is the largest lithium-ion, grid-connected battery storage system in the world. It is co-located with the Hornsdale wind farm in the Mid North region of South Australia. It has been developed by Tesla, Inc. and is owned and operated by France-based energy company Neoen.

There are already three operational river-based pumped hydro facilities in Australia – Wivenhoe, north-west of Brisbane (500 MW); Shoalhaven in NSW (240 MW); and the Tumut 3 power station in the Snowy Mountains (1,800 MW). 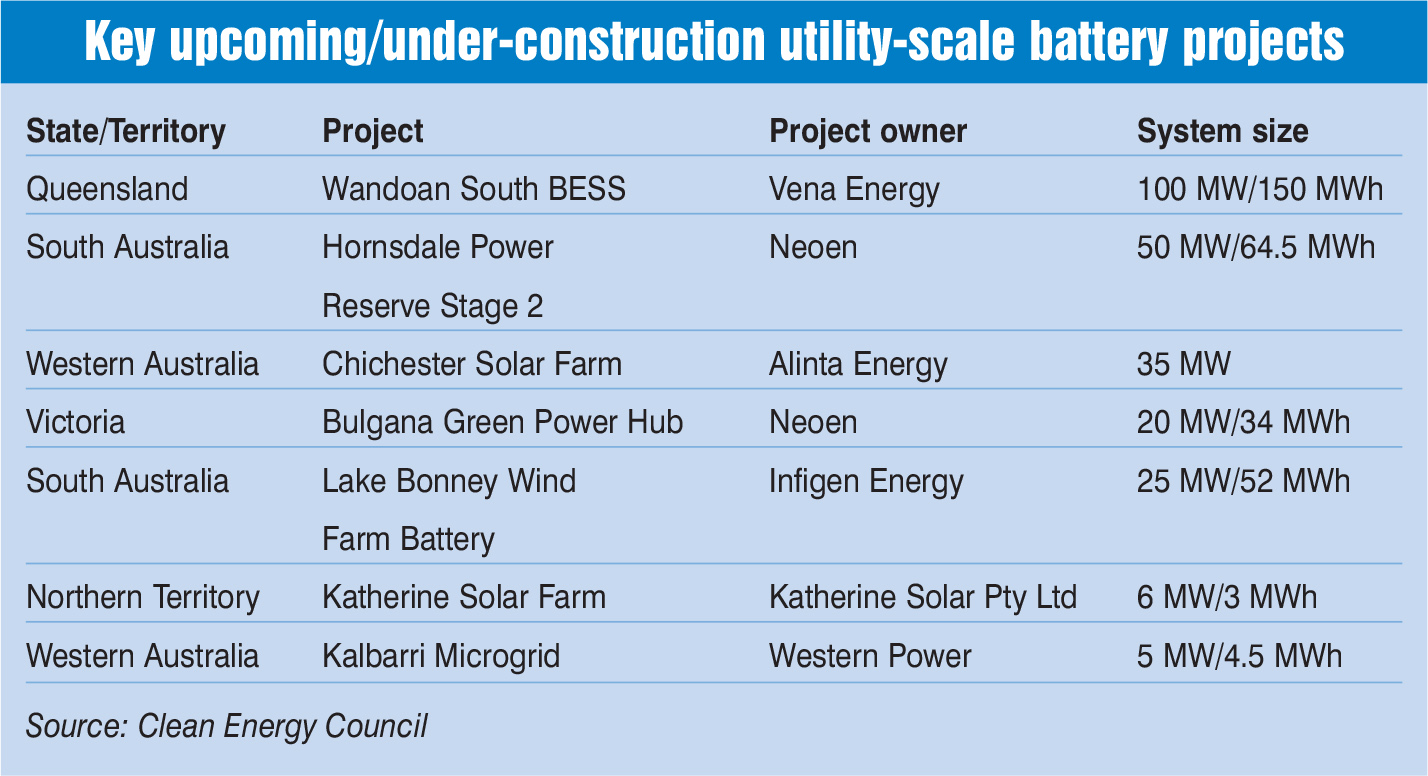 Most state governments in Australia are working hard to fill the void left by the absence of a national climate and energy policy. While a strong, consistent national policy remains preferable to navigating a patchwork of individual jurisdictions, state and territory policy measures have been crucial in driving investment in new and innovative energy solutions. State government investment is also supporting innovative renewable energy project trials, making solar more accessible for medium- and low-income households, and facilitating the establishment of large-scale battery storage.

Some of the recent developments in the sector and plans to speed up the adoption of energy storage in the country are given below.

NSW: The NSW government plans to set up a 3 GW renewable energy zone (REZ) in the state’s Central West and Orana region. The government programme is designed to unlock a huge pipeline of large-scale renewable energy and storage projects in NSW’s first REZ around Dubbo, in order to offset the planned retirement of its ageing thermal generation fleet. Noting that new transmission infrastructure will be needed as the Australian energy system transitions from despatchable thermal generation to largely variable renewable energy generation, the Australian Renewable Energy Agency (ARENA) announced AUD 5 million in funding for state transmission network developer TransGrid’s AUD 16.2 million scooping study, in support of a major project that can demonstrate a pathway for future REZs across the NEM.

Northern Territory (NT) and Western Australia (WA):  The NT government has approved the procurement of a large-scale battery system to help balance the local Darwin-Katherine electricity grid, at a cost of AUD 30 million. The battery system will also help large-scale solar plants in the region to integrate their output into the grid in the future.

Furthermore, the NT government launched the Household and Business Battery Scheme, under which households and businesses stand to receive a grant of AUD 6,000 for the purchase and installation of solar PV systems with inverters and battery equipment (with a battery capacity of at least 7 kWh) selected from an approved list of vendors.

The WA government took a community approach for supporting energy storage solutions, announcing the roll-out of community power banks, which will be installed in 10 towns in WA by 2020. The community power bank allows a group of properties in a community to own a share of the battery and store their excess solar energy, which they can draw back out for use later on. The utility customers in WA will be able to access these community power banks. The power banks are placed in areas where the network needs upgrading or adjusting, to maintain power reliability and quality.

Tasmania: The Tasmania state liberal government has unveiled its draft action plan to reach a target of 200 per cent renewables by 2040. Under this, it plans to double its current output of renewable energy generation from 10,500 GWh per year to about 21,000 GWh by 2040.

The target is based on the state’s goal to become the “Battery of the Nation”, utilising its abundant hydropower and wind resources, and to provide despatchable renewable power to Victoria via subsea links.

In December 2019, the state’s transmission network developer, TasNetworks, released the Business Case Assessment for Project Marinus (Marinus Link). The link is a proposed high voltage direct current (HVDC) interconnector, crossing the Bass Strait and connecting the states of Tasmania and Victoria. It is expected to deliver up to 2.5 GW of renewable hydropower to Tasmania and Victoria, including 16 GWh of storage.

The Business Case Assessment report confirms a positive business case and shows that the 1,500 MW cable (to be delivered in two stages of 750 MW each) and supporting transmission infrastructure is technically feasible and commercially viable. The Marinus Link and the supporting transmission upgrades for Tasmania’s on-island transmission network will enable additional despatchable energy to be transferred across Bass Strait. The project will also unlock a cumulative AUD 5.7 billion worth of additional investment in renewable energy and long-duration energy storage in Tasmania, including Battery of the Nation developments.

According to energy research and consultancy firm Wood Mackenzie, Australia is set to add 1.2 GWh of energy storage capacity in 2020, more than double the 499 MWh installed in 2019. This will increase the country’s cumulative storage capacity to 2.7 GWh in 2020.

An emerging segment where battery energy storage is being used is electric vehicles (EVs). In an innovative move towards powering driverless EVs, which will utilise solar PV roofs and lithium-ion battery systems, ARENA announced AUD 2 million in funding for the Australian start-up Applied Electric Vehicles Private Limited. Each driverless EV will fulfil 60 per cent of its energy requirements from solar energy.

Another initiative being planned by the NSW government is to create a virtual power plant (VPP) network. A VPP is a network of batteries and power generating assets, such as solar panels that are physically spread out but centrally controlled. These networked batteries can charge or discharge at the most opportune time for the grid, collectively acting like a large power plant and avoiding emissions. The NSW government announced its plans to install smart batteries in government buildings to boost energy security by providing up to 13 MW via a VPP.

Private developers are increasingly assuming a leading role in energy storage solutions. Singapore-based developer Vena Energy has recently announced that it will soon begin the construction of Queensland’s largest grid-scale battery, which will be located near Wandoan in the Western Downs. The 100 MW/150 MWh project will be delivered under a 15-year power purchase agreement (PPA) with Australia’s biggest power producer, AGL.

In April 2020, work was finalised on the network connection of the Tesla-developed Hornsdale Power Reserve in South Australia, which is being expanded with an additional 50 MW/64.5 MWh of capacity. The expanded battery installation is expected to soon provide support during periods of very low demand and tackle increased risk of outages.

In June 2020, AEMO published the energy storage technology provider Fluence’s proposal to use two large-scale BESSs to ease electricity transmission issues between Victoria and NSW. The BESSs would serve as a “virtual transmission” system between the two states and create additional capacity to transfer power, easing network congestion. At present, the Victoria end of the Victoria-NSW interconnector (VNI) faces acute network congestion. According to Fluence, an alternative solution to building transmission lines could be the installation of two separate 250 MW/125 MWh BESSs at two substations on the existing VNI corridor.

The massive Snowy 2.0 – a pumped hydro expansion of the existing Snowy Scheme located in NSW – is a government-supported project due for completion in 2025. It will add 2,000 MW of capacity (roughly equivalent to a new coal-based plant). The project is expected to contribute significantly to large-scale storage capabilities, linking two existing scheme dams, Tantangara and Talbingo, through underground tunnels and an underground power station with pumping capabilities. Snowy 2.0 has the ability to generate energy quickly for the grid when the demand for energy soars.

At this crucial time when the country is experiencing significant growth in solar and wind energy generation, it is imperative to address the issue of grid congestion. According to industry experts, grid congestion is threatening to choke about 67 GW of planned renewable energy projects. The current grid system is not even equipped to accommodate some of the projects under construction.

Moreover, incidents such as the frequent occurrence of heatwaves and bushfires in parts of the country cause damage to transmission lines, in turn unprecedented strain on the grid. In response to the 2019-20 Australian bushfires, South Australia’s state government, via its Department of Human Services, has offered free BESSs to homeowners affected by the fires.

There is an urgent need for a plan to spur investment in grid infrastructure and encourage the deployment of storage solutions at grid scale. However, the storage systems lack revenue certainty and thereby need to be further incentivised. There is a lack of regulatory incentives for network service providers to support storage as a non-network solution.

Backed by energy storage, Australia is making an effort to utilise its abundant renewable energy generation in an efficient manner. The considerable amount of new wind and solar capacity that has entered the country’s market has pushed down the cost of clean energy generation, which is now lower than that of new coal-based generation.

Although the country has some significant projects lined up, the pace of the transmission work is still lagging behind the renewable energy investment. Grid challenges need to be addressed as the country moves towards adopting storage solutions to sustain the benefits of renewable energy generation.