For any country, the availability of electric power is a basic necessity. For a developing country like India, electric power plays a critical role in its development. With growing industry and urbanisation alongside rising standards of living, the need for reliable and quality power is ever increasing. This necessitates a rapid build-up of transmission infrastructure. Transmission lines are an integral part of such infrastructure, and require long lead times to be built.

The construction of a power transmission line is a challenging and time-consuming task, as these lines cut across the length and breadth of states and geographies and span hundreds of kilometres. Their routes often encompass hilly terrain, forests, river crossings, railway and power line crossings, and agricultural fields.

Transmission line construction activity comprises three major steps – constructing tower foundations, erecting towers, and finally stringing, wherein the towers are connected through conductors. In the conventional method of stringing, a posse of men is deployed on the ground to carry out the work. A pilot wire is pulled and carried manually from tower to tower in this method. This pilot wire acts as a connector and further helps to string the line sections with the conductor. When the line passes through hilly terrain or forest areas, the process becomes risky, challenging and time-consuming for the men deployed. Depending on the local challenges, it may take two to three days to connect the towers with the pilot wire. If the stringing is to be done across highways or railway/power line crossings, the time required to shut them down further adds to project delays.

In view of the above issues with manual stringing, the innovative new method of stringing using drones brings major advantages. This method was adopted for a project executed by Sterlite Power Transmission Limited (SPTL) in Kerala, which is described in greater detail below.

In 2018, SPTL was awarded a transmission line upgrade project by the Kerala State Electricity Board (KSEB), for converting an existing 48.7 km (Phase 1), 220 kV single circuit line to a 400/220 kV multicircuit multivoltage line in the existing line corridor. This line spans two major railways crossings (with heavy traffic throughout the day), numerous LT and HT power line crossings and many road/ highway crossings. It also passes through difficult terrain, deep forests, and agricultural fields. The tight project execution timeline and SPTL’s commitment to complete the project on or before time made the team look for innovative solutions. Stringing was identified as a critical activity with a major risk of delays due to the issues mentioned above. Thus, the idea of using drones for stringing was born and put into action.

Accordingly, the necessary technical parameters were determined for a drone with the suitable payload. The selection of the drone was based on the stringing span lengths, the weight of the pilot wire, the expected flight time of the drone, and the maximum height to be achieved during the flight. A hexacopter drone (see Fig. 1) that met the desired requirements was procured for the project. A spare set of batteries was also procured to maintain work continuity while recharging used batteries.

The selected drone could cover a span of up to 500 metres in 20 minutes. It carried a 2.5 mm pilot wire from one tower to another, bypassing all the obstacles on the ground. Once the pilot wire was strung, it was used to pull a second pilot rope of 12 mm, which was subsequently used to pull the line conductor. This process eliminated the need to manually carry the pilot wire on the ground from tower to tower and compressed the time taken for stringing from days to a matter of hours. It also helped to substantially reduce the man-hours required to carry out the job.

As mentioned earlier, there are two railway crossings along the line route. Stringing across the railway crossings manually would have required shutting down both the railway traffic and the railway electric line. Since this was one of the busiest routes of the railways, its availability for shutdown was uncertain. Apart from delaying execution, the resultant idling of labour would have put pressure on the project cost. Royalty would also have to be paid to the railways on a per hour basis for traffic shutdown. To address these challenges, drones were used (Fig. 2) to connect the towers, eliminating the need for a shutdown. The whole process was explained in advance to the railway authorities and was carried out in their presence without any hiccups. A similar approach was followed for stringing across high-voltage and low voltage power line crossings (Fig. 3). This helped avoid the shutdown of the power lines, thereby eliminating supply disruptions for consumers. The toughest challenge  for manual stringing is travelling through deep terrain and forests (Fig. 4). While some sort of pedestrian approach to the towers is generally available, travelling between the towers is still risky as the person manually carrying the pilot wire has to negotiate several obstacles on the ground. Using a drone helped avoid this manual effort, thereby increasing the safety of the workers. 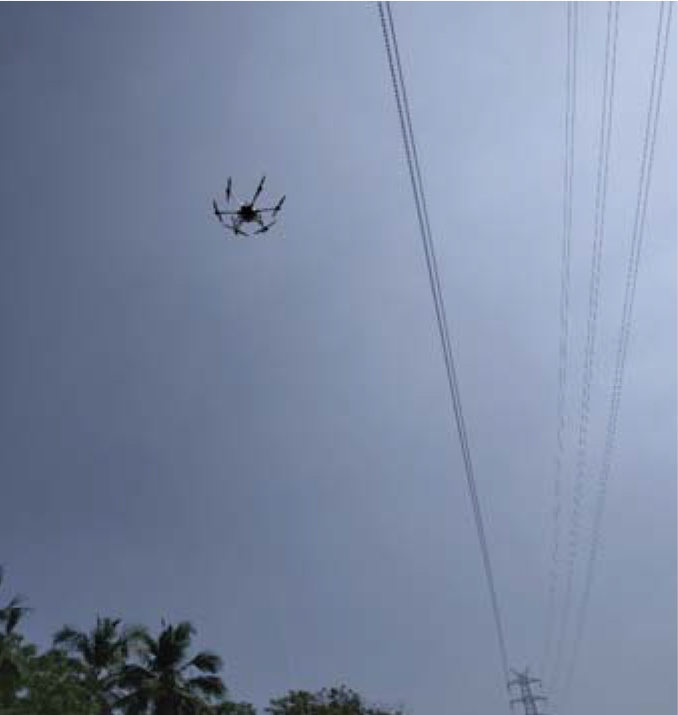 Using the drone across agricultural land helped avoid damage to standing crops, thus saving on compensation payments. The impact on the environment was also minimised when stringing through areas with flora and fauna.

Overall, the time taken for stringing was reduced significantly, from six man-months to 13 hours of drone flying time. This helped in executing the project ahead of time and improved the project financials. It also worked to the satisfaction of customers and stakeholders such as farmers, railway authorities and passengers, electricity consumers, and project team members.

The use of advanced technology for project execution not only reduces human effort but also protects the health and safety of workers. In fact, the theme for National Safety Day 2020 was “Enhance Health & Safety Performance by Use of Advanced Technology”. The use of drones along with enchanced safety measures on the ground helped the SPTL team execute the Kerala project in a safe manner, thus making it an apt application of this theme.

During the execution of the KSEB project, permission was sought from the local district administration for the use of drones in its jurisdiction area. The customer also extended full support in adopting the technology and obtaining administration approvals wherever required. In almost all cases, the permissions came through after the project team explained the necessity of using drones for the project and the positive social impact they would have, by minimising discomfort to local populations, maintaining continuity of services, etc.

Currently, the Ministry of Civil Aviation and the Directorate General of Civil Aviation (DGCA) are working to define regulations to ensure safe flying of drones in Indian airspace. In early 2020, the DGCA came out with a notification, which required all drones to be registered on the DGCA website and for owners to obtain an ownership acknowledgement number and a drone acknowledgement number for each drone. The DGCA is developing the Digital Sky platform, an online platform to apply for and obtain the required permissions to fly drones, eliminating the need to obtain them manually. With the implementation of the Digital Sky platform, the “No Permission No Takeoff” feature will also be enabled, which will help the government track proper and legal use of drones in Indian airspace.

A trendsetter in this field, SPTL has standardised the use of drones for stringing lines wherever the terrain, forests, agricultural land or crossings pose challenges. This is in line with the company’s two key values of social impact and innovation, and its core purpose of “empowering humanity by addressing the toughest challenges of energy delivery”.