Transmission line length has grown considerably over the years to cater to the increasing generation capacity and power demand. Between 2014-15 and 2019-20, the line length increased at a compound annual growth rate (CAGR) of 6.3 per cent. As of September 2020, the total transmission line length stood at 432,785 ckt. km. The state sector has a major share (57 per cent) in line length, followed by the central (39 per cent) and private (4 per cent) sectors. However, in terms of growth rates, the private sector leads with a CAGR of 12 per cent in the past five years (vis-à-vis 7 per cent for the central sector and 5 per cent for the state sector).

Of late, the Indian power grid is becoming increasingly complex owing to the integration of large-scale renewables, growth in decentralised generation, penetration of electric vehicles, and rise in digital loads. This necessitates electric utilities to not only expand their transmission networks expeditiously and strengthen existing transmission links but also adopt new emerging technologies to ensure seamless power flow.

A large part of the transmission system expansion in the coming years will be driven by the need to evacuate renewables, which are projected to reach 450 GW by 2030. Since a  majority of renewables are expected to come up in far-flung regions, there will be an increased focus on developing long distance high capacity transmission lines using advanced technology in compressed schedules so that transmission projects can be commissioned in tandem with generation projects.

Growing urbanisation has led to space constraints in many parts of the country, necessitating the installation of more compact transmission lines. Various advancements have been made by the industry to meet the evolving needs of utilities. These advancements are providing for an increase in the quantum of power that can be transmitted through conductors, thereby minimising right-of-way (RoW) requirements. In recent years, advanced conductor technologies such as high temperature low sag (HTLS) conductors, superconductors and extra high voltage (EHV) lines, have gained prominence among transcos. Recently, Power Grid Corporation of India limited (Powergrid) commissioned the 3,531 ckt km, 800 kV HVDC bipole line from Raigarh (HVDC station) to the Pugalur (HVDC station) setting new benchmarks.

HTLS lines have found increasing acceptance among utilities as they can operate at higher temperature ranges (150-250 degrees Celsius) than ACSR aluminium conductor steel reinforced (<100 degrees Celsius) lines, and have low thermal expansion in the temperature range. A major application of HTLS conductors has been in reconductoring existing lines to increase the power transfer capacity. The power capacity can be increased up to two times in existing corridors through uprating with HTLS conductors. It comes with the benefits of faster execution, no additional ground footprint and improved safety.

Given that transmission losses are reduced at higher voltages, transmission and distribution utilities are looking at installing EHV cables at 66 kV and above voltages. Also, with the growing demand for power in urban areas and industries, underground cable systems are being deployed by utilities.

Another emerging cable type is electron-beam or e-beam cable, which finds use in high temperature applications in the solar, railway and shipping segments. Further, gas-insulated lines (GILs) are another form of emerging technology for deployment in areas where overhead lines are not feasible, as they can be installed under the ground as well as in tunnels or trenches. GILs have nitrogen and sulphur hexafluoride as the insulating medium as against physical layers of separation in conventional transmission lines.

High surge impedance loading lines, which help to limit the voltage drop and thus increase the power transfer capability, can also be adopted by utilities.

Tower upgrade technologies are also being deployed by utilities via multicircuit multivoltage solutions, wherein the line is upgraded with more than one voltage circuit on the same tower. Voltage upgrade is a methodology of increasing the line capacity by changing the system voltage from a lower value to a higher value of the line in the same available corridor. The power transfer capacity can be increased by over four times using this technology.

Further, predictive tools can be adopted by utilities to increase situational awareness. One such tool is dynamic line rating (DLR), which is used to manage the available line capacity on a real-time basis by monitoring parameters such as conductor temperature, inclination (sag, clearance), current and ambient conditions. DLR can aid in congestion relief of transmission lines, avoiding renewable energy curtailment, improving grid reliability, improving cost effectiveness of transmission lines and avoiding the cost of line construction just to meet load requirements for a short period of the year. 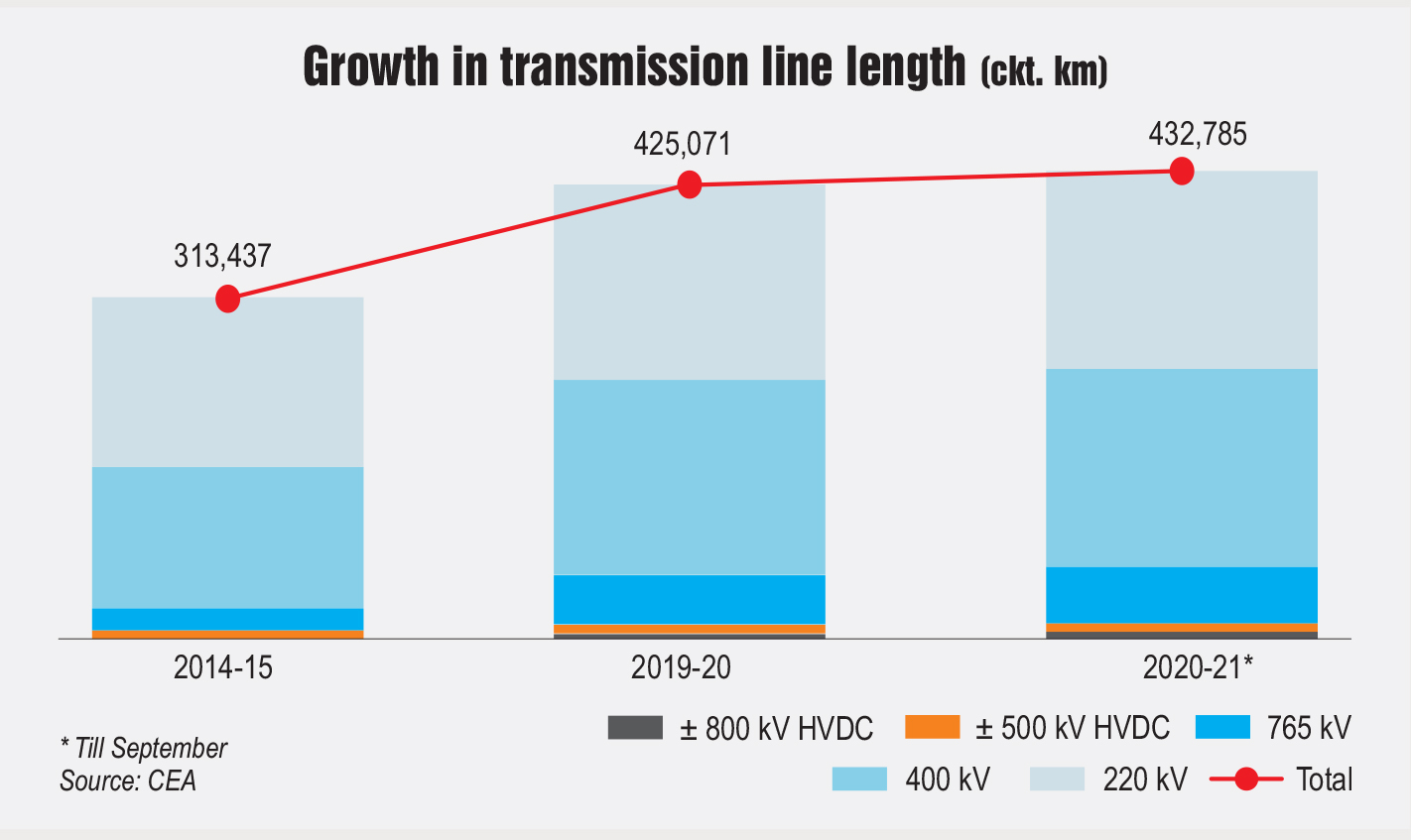 The power sector is witnessing two key trends – an increasing share of electricity in the final energy consumption and an increasing share of renewable energy in energy sources. These changes, which augur well for the sector, are likely to bring in greater growth opportunities for transmission at the interstate, intra-state and regional levels (through cross-border interconnections). The National Infrastructure Pipeline envisages an investment of Rs 14,100 billion in the power sector, including Rs 1,900 billion in intra-state transmission, till 2025, implying a host of opportunities in the transmission segment.

In order to meet the target of 175 GW renewable energy capacity by December 2022, system planners have identified the transmission system required for the integration of 66.5 GW of renewable energy on an all-India basis. Individual schemes are being taken up for implementation of renewable energy projects in a phased manner, that is, 12.4 GW by December 2020, 26.1 GW by December 2021, and 28 GW by December 2022. The transmission schemes are estimated to cost about Rs 420 billion in interstate transmission, of which works costing about Rs 175 billion have been allocated for implementation, either through Powergrid or through the bidding route. Further, there are ambitious plans to unlock the solar potential in the Leh-Ladakh region. The central government proposes to establish a 7.5 GW solar power park in Ladakh, along with the associated transmission infrastructure, with an investment of Rs 450 billion. The Ministry of New and Renewable Energy is reportedly planning to include the linked transmission lines under the Green Energy Corridor Phase II scheme for viability gap funding. 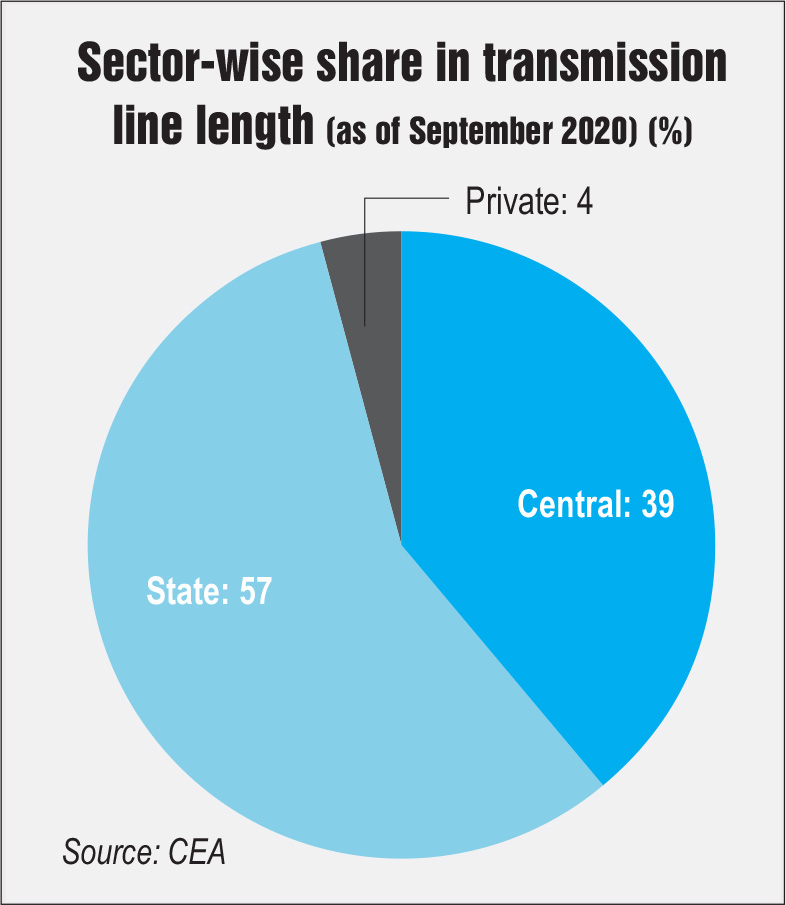 On the cross-border integration front, India is already connected to its neighbouring countries, Nepal, Bhutan and Bangladesh, and the government has been in discussions with Myanmar and Sri Lanka for establishing interconnections with these countries. Several new cross-border links have been planned. These are the 400 kV Butwal (Nepal)-Gorakhpur (India) link, the Madurai (new) (India)-New Habarana (Sri Lanka) HVDC line with two 500 MW HVDC terminals in two phases, and the 765 kV Katihar (India)-Parbotipur (Bangladesh)-Bornagar (India) double circuit line. All these initiatives will open up additional opportunities for the transmission segment. In addition, there is potential for growth in energy storage systems, telecom and smart grids.

The power grid of the future will be required to be more flexible, smart and resilient with growing decarbonisation and digitalisation across sectors. Transmission utilities will need to lay considerable emphasis on modernising intra-state networks and strengthening the grid. Significant demand is expected to come up for retrofitting, uprating and upgrading of networks, including the replacement of conductors to better utilise the existing RoW. Furthermore, greater upstream expansion of cross-border networks is expected as the country pitches for the “One Sun One World One Grid” concept.