India is currently facing an acute air pollution crisis, with the presence of 14 of the top 20 most polluted cities in the world. In view of the growing environmental concerns, the government has been promoting e-mobility, which has zero tail pipe emissions. This is expected to reduce not only the dependence on oil but also vehicular pollution in cities. The government has developed a policy framework and taken several other initiatives to create an e-mobility ecosystem in the country.

In 2011, the government approved the National Mission on Electric Mobility (NMEM) and subsequently, in 2013, the prime minister unveiled the National Electric Mobility Mission Plan 2020 (NEMMP 2020). The NEMMP 2020 provides the vision and road map for faster adoption of electric vehicles (EVs) and kick-starting of EV manufacturing. As a part of the NEMMP 2020, the Department of Heavy Industry (DHI) formulated the Faster Adoption and Manufacturing of (Hybrid and) Electric Vehicles in India (FAME India) scheme in 2015, to promote electric and hybrid vehicle technologies.  Further, various guidelines and incentives have been rolled out by the government from time to time for promoting green mobility.

A look at the ongoing policy initiatives in the EV segment…

Phase I of the FAME scheme was implemented for a period of two years starting March 2015, and later extended till March 2019, with an outlay of Rs 8.95 billion. It focused on four key areas – demand creation, technology platform, pilot project and charging infrastructure. In the first phase, about 0.28 million EVs and hybrid vehicles were supported by way of demand incentive amounting to about Rs 3.59 billion. The DHI sanctioned and deployed 425 electric and hybrid buses in various cities at a total cost of about Rs 2.8 billion. Under charging infrastructure, the government sanctioned about 520 charging stations/infrastructure for Rs 0.43 billion. DHI entrusted public sector undertakings (PSUs) such as BHEL and REIL with the task of making three expressways (Delhi-Chandigarh, Delhi-Jaipur and Mumbai-Pune expressways) EV friendly by establishing charging infrastructure at regular intervals.

Phase II of the FAME scheme was finalised and notified on March 8, 2019. It commenced from April 1, 2019 for a period of three years (2019-20 to 2021-22) with an outlay of Rs 100 billion, around 10 times the outlay under Phase I. This phase has three components – demand incentives, charging infrastructure and administrative expenditure.

It focuses on the electrification of public and shared transportation and aims to support, through subsidies, 7,090 four-e-buses, 500,000 e-three-wheelers, 55,000 e-4 wheeler passenger cars and 1 million e-two-wheelers. It is applicable to privately owned registered e-two-wheelers. Under this phase, demand incentive is linked to battery capacity, that is, Rs 10,000 per kWh for all eligible vehicles except e-buses, for which the incentive is Rs 20,000 per kWh. Only OEMs which have achieved the 40 per cent localisation level in the case of four wheelers and buses and 50 per cent localisation in the case of two-wheelers and three-wheelers are eligible for incentives.

As of September 15, 2020, about 27,715 EVs have been supported under FAME II, by way of demand incentive amounting to about Rs 0.95 billion. Further, the DHI has sanctioned 5,595 e-buses – 5,095 e-buses to 64 cities/state transport corporations for intra-city operation, 400 e-buses for intercity operation, and 100 e-buses for last-mile connectivity to the Delhi Metro Rail Corporation under – FAME II. This involves government incentive of around Rs 28 billion.

In addition, the scheme will facilitate the creation of charging infrastructure to address range anxiety among EVs users. The DHI has also sanctioned 2,636 EV charging stations amounting to Rs 5 billion in 62 cities across 24 states/union territories under FAME II.

On September 25, 2020, the government sanctioned 670 e-buses in Maharashtra, Goa, Gujarat and Chandigarh, and 241 charging stations in Madhya Pradesh, Tamil Nadu, Kerala, Gujarat and Port Blair under Phase II of FAME. It also extended the validity of certificates for availing of benefits under FAME II for all approved EV models by three months till December 31, 2020. 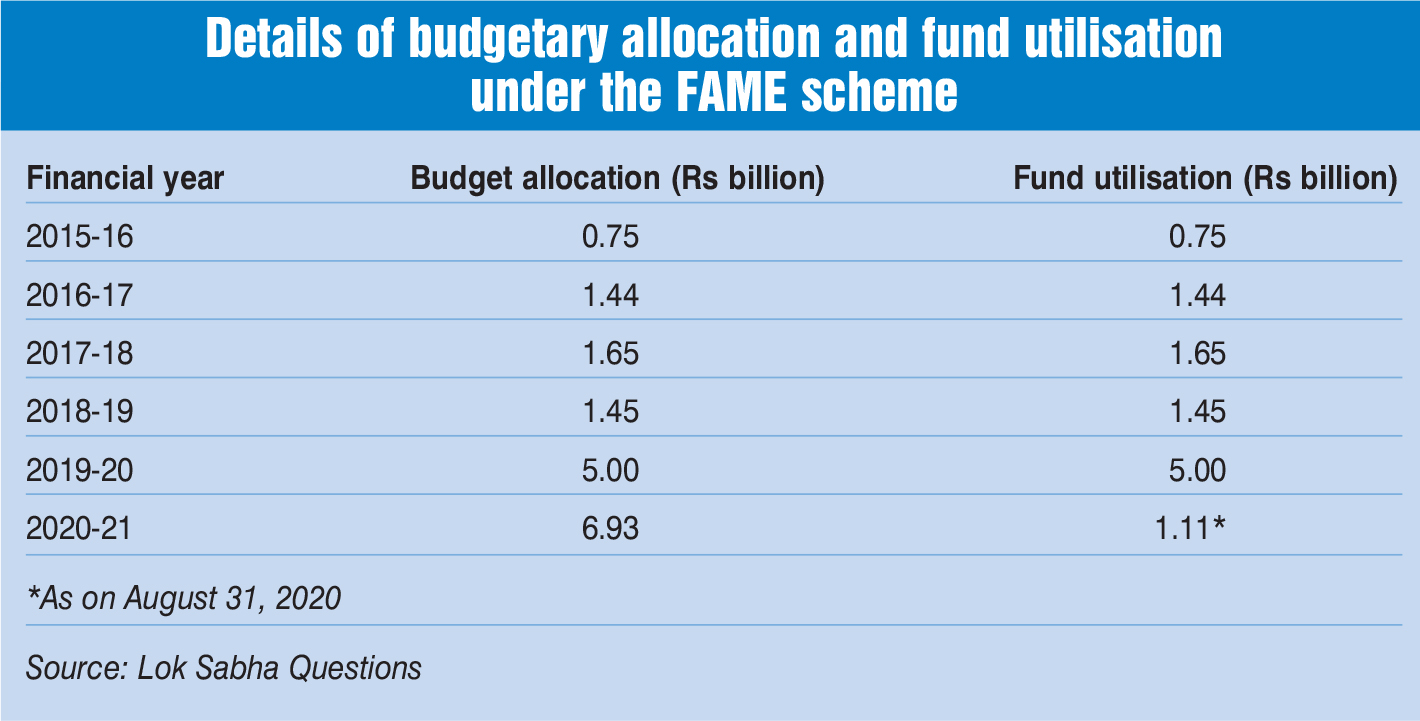 As per a proposal drafted by NITI Aayog, India plans to offer $4.6 billion in incentives by 2030 to firms manufacturing advanced batteries. The government will start by offering cash and infrastructure incentives of Rs 9 billion in the next financial year which would then be ratcheted up annually. The proposal estimates a reduction in oil import bills by as much as $40 billion by 2030 with the adoption of EVs. The country plans to retain its import tax rate of 5 per cent for certain types of batteries, including batteries for EVs, until 2022, but will increase it to 15 per cent thereafter to promote local manufacturing. The policy could benefit battery makers such as South Korea’s LG Chem and Japan’s Panasonic Corp as well as automakers that have started building EVs in India such as Tata Motors and Mahindra & Mahindra. China accounts for 80 per cent of the world’s lithium-ion cell production; however, India has introduced stricter investment rules for Chinese firms. As per the draft proposal, the annual domestic demand for battery storage and market size is currently less than 50 GWh and worth just over $2 billion, which could grow to 230 GWh and more than $14 billion in 10 years. The DHI is supporting the setting up of a centre for battery engineering at IIT Madras. Further, it is supporting R&D projects for the development of advanced batteries. At present, batteries account for an average of 50 per cent of the cost of EVs in the country.

In August 2020, the government allowed the sale and registration of EVs without pre-fitted batteries, a move that will reduce the upfront cost of these vehicles. The move comes after the Ministry of Road Transport and Highways received representation from the industry to delink the cost of battery (which accounts for 30-40 per cent of the total cost) from the vehicle cost.

The governments, at the central and state level, will play a key role in e-mobility transition. On August 7, 2020, the Delhi government approved the Delhi EV Policy, 2020, valid for a period of three years, to accelerate EV adoption especially in the mass category of two-wheelers, public/shared transport vehicles and goods carriers. The policy provides waiver of road tax and registration fees for all EVs during the period of this policy. The funding for all these incentives would be supported by the state EV fund with contributions from sources such as pollution cess, road tax, congestion fee and environment compensation charge. Going forward, other states should follow suit for greater promotion of green mobility.