A detailed phasing plan was prepared by the Central Electricity Authority (CEA) to outline a road map for the installation of flue-gas desulphurisation (FGD) systems for SOx control. The plan was sent to the MoEF&CC in June 2017. A detailed report was prepared for meeting the new norms without any shortfall in electricity supply. Accordingly, an implementation plan with a deadline of 2022 was submitted by the Ministry of Power (MoP) and finalised by the CEA in consultation with all stakeholders. The MoP forwarded it to the MoEF&CC in October 2017. However, the deadline for power plants in Delhi-NCR was December 2019.

As of October 2020, the total capacity for monitoring the implementation of FGD is approximately 170 GW and the number of units, after including the newly commissioned ones, stands at 448. So far, bids have been awarded for 143 units, that is, 38.4 per cent of the planned capacity. These bids include 114 units in the central sector, followed by 27 units in the private sector and 2 units in the state sector. As compared to the total planned capacity in each sector, bids have been awarded for 86.4 per cent in the central sector, followed by 26.7 per cent in the private sector and 1.9 per cent in the state sector. Further, bids that have been opened but not yet awarded include 53 units (totalling 22,870 MW), of which 38 units (14,620 MW) are in the state sector and 15 units (8,250 MW) are in the private sector. Meanwhile, bidding is in process for two units of Gujarat State Electricity Corporation Limited (500 MW). A notice inviting tender (NIT) has also been issued for 28,542 MW of capacity, but bids have not yet been opened.

Although the December 2019 timeline is over, FGD systems have not been implemented at many power plants. In view of this, the Central Pollution Control Board (CPCB) has directed 15 power plants to deposit compensation for failure to comply with environmental norms. This includes 29 units in the NCR of the total 11,050 MW capacity, and six units outside NCR of the total 3,620 MW capacity.

Despite continued efforts, there are numerous reasons for the delay in the installation of FGD systems such as limited vendor and subvendor capability globally to supply FGDs, and delay in the award of tenders due to a lack of technical and operational expertise regarding FGD technology in the market and with power utilities.

For the installation of an FGD system,  almost a year is required for the pre-construction phase and a further 30 months are needed for the construction of the FGD system after the letter of award is issued. Therefore, a minimum of three-and-a-half years is required for the commissioning of an FGD. Yet, TPPs located in the NCR were given only one-and-a-half years for compliance, which was an area of concern. Besides, several important clarifications in the norms, such as regarding the chimney height and water consumption, were issued by the MOEF&CC only by June 28, 2018, which led to delay in adoption and installation of FGDs. Further, the price of wet-type FGD has now increased from Rs 4.5 million per MW to Rs 7.5 million per MW due to the demand-supply gap in the FGD market. Taking an average price of Rs 5.5 million per MW, the capex requirement for installing an FGD at 170 GW of existing thermal capacity, 10 GW of commissioned capacity after the preparation of the phasing plan, and 58 GW of under-construction capacity, would be around Rs 131 trillion. This highlights not only the huge financial requirement but also the increasing manufacturing time due to overbooking of suppliers. The private plants, in particular, face funding issues. On March 20, 2020, the MoP revised the domestic content requirement for FGD systems from 70 per cent to 80 per cent, which means that now only 20 per cent of content can be imported instead of the previous 30 per cent.

Banks are reluctant to finance units that are either stressed, or lack power purchase agreements (PPAs), or have partial PPAs. Private power producers have been demanding a provisional tariff for the installation of FGDs, so that banks can provide them with finance. However, no provisional tariff has been granted as per the Forum of Regulators (FoR) because of the reluctance of state electricity regulatory commissions.

The MoP, in consultation with the CEA, is recommending a reasonable extension of timeline because of the Covid-19 pandemic and the import ban. It has proposed an extension of six months to two years on a case-to-case basis. The CEA and MoP are also holding regular meetings with bankers so that issues related to loans to independent power producers can be resolved. Since provisional tariff has not been granted, the FoR has agreed to issue investment approval on a case-to-case basis. 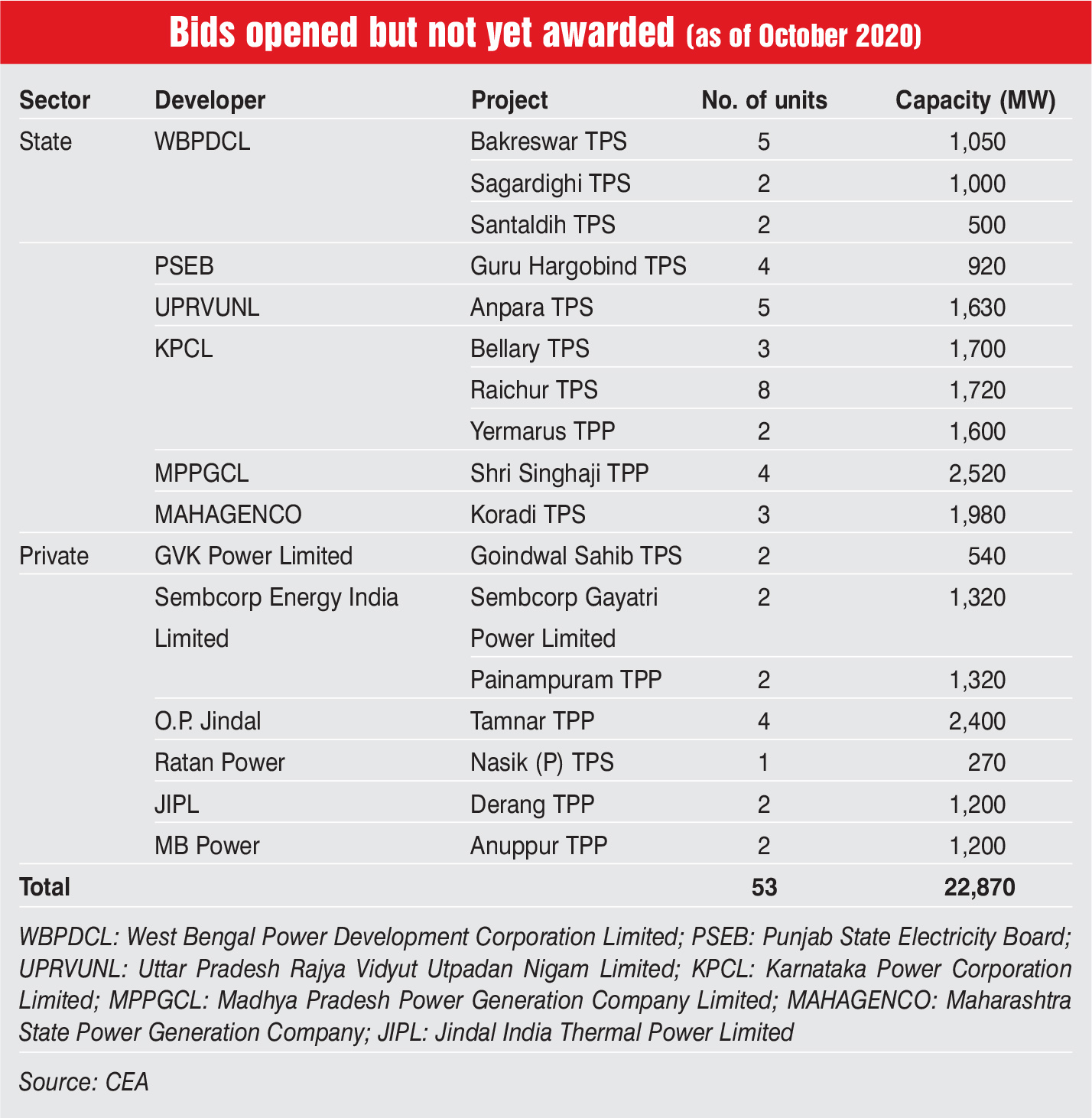 The Central Electricity Regulatory Commission (CERC) has already recognised the revised environmental norms as a “change in law” event, and is also planning to amend its tariff regulations for 2019-24 in order to incorporate the cost of FGD systems in tariff calculations. In September 2020, the CERC also floated a staff paper on the mechanism for compensation for competitively bid thermal generating stations for change in law on account of compliance with the revised emission standards of the MoEF&CC, where PPAs do not have an explicit provision for such compensation. Going forward, the industry is likely to see an uptick in the installation of FGD systems as the issues are being resolved through regulatory reforms.

Based on a presentation by B.C. Mallick, Chief Engineer, CEA, at a recent Power Line webinar