The power sector is the largest contributor to greenhouse gas (GHG) emissions in India. Hence, reducing the carbon footprint of the sector is essential for limiting climate change. As each state has its own sets of challenges in transforming the power sector, state-level actions are required to meet India’s Nationally Determined Contribution (NDC) goals. The NDC goals that directly involve the power sector are: Goal 3 – reduction of emission intensity of GDP by 33-35 per cent by 2030 from the 2005 level; and Goal 4 – achieving 40 per cent of cumulative installed capacity through non-fossil fuel resources by 2030. The challenge lies in incentivising policy options such as increasing efficiency by reducing transmission, distribution and auxiliary losses; increasing the share of renewable energy and renewable purchase obligations (RPO); reducing captive power generation; and increasing the reliability of power so that efficiency is ensured both on the supply and demand sides. 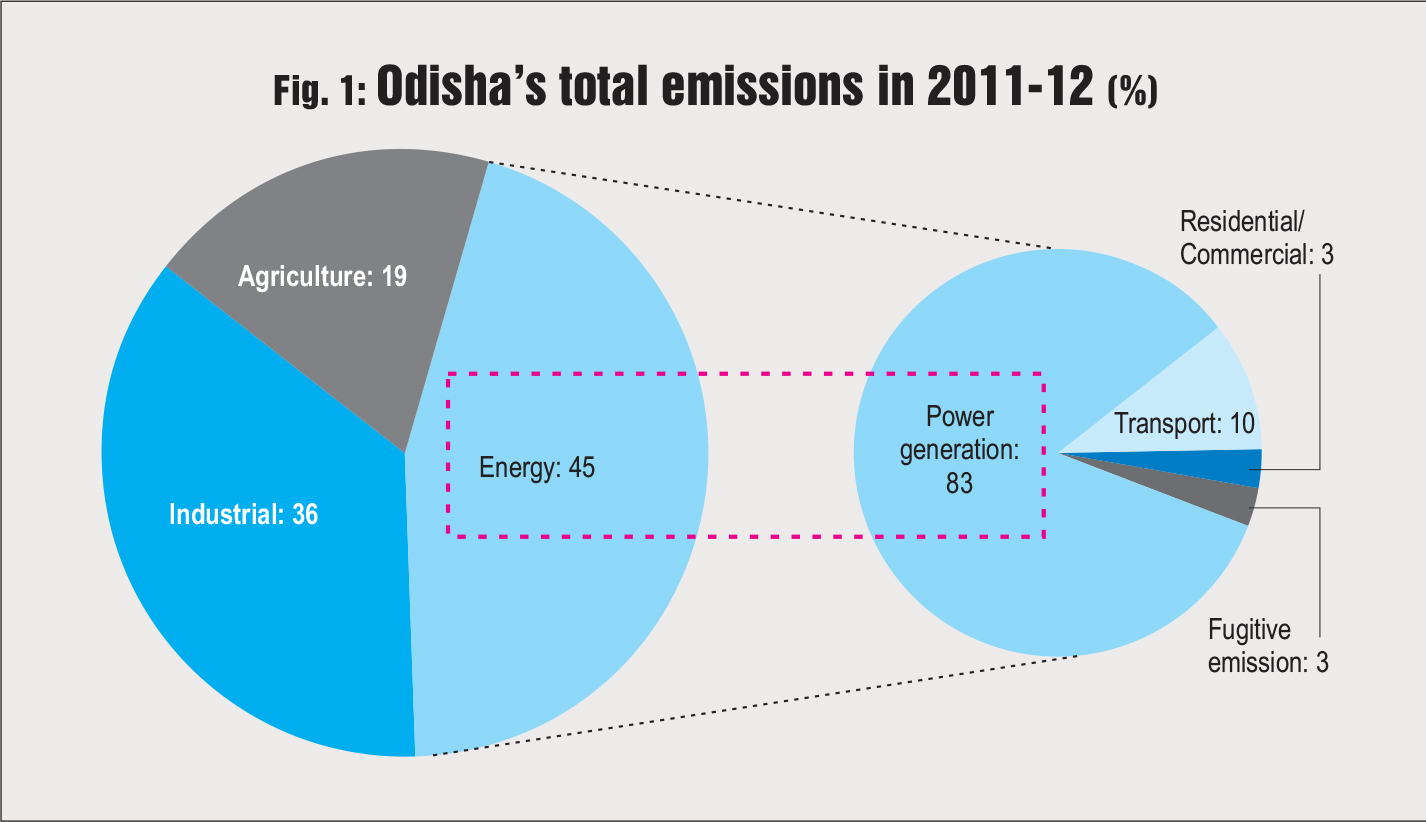 The power sector plays a vital role in the development of an economy. As per the MoEFCC, it is a major contributor to India’s total GHG emissions with a share of 44 per cent. In Odisha, power generation contributes to around 83 per cent of the energy sector emissions (Fig. 1). Odisha has a per capita emission of 2.35 tonnes, which is higher than the national average of 1.7 tonnes. It is thus essential to explore ways of limiting emissions from this emission-intensive sector. This article focuses on suggesting prevalent interventions on both supply and demand sides as well as devising strategies for implementing at the policy and market levels. 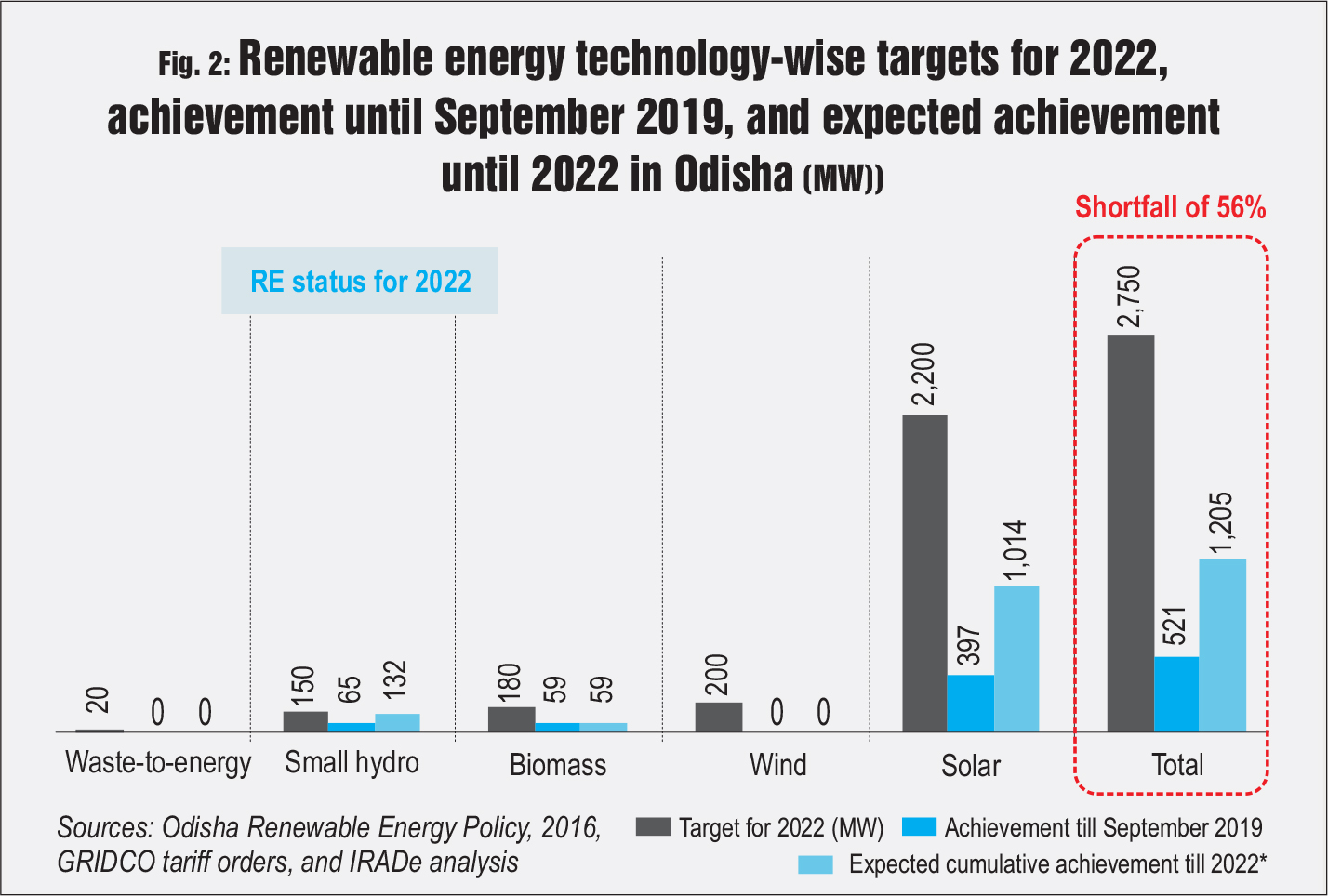 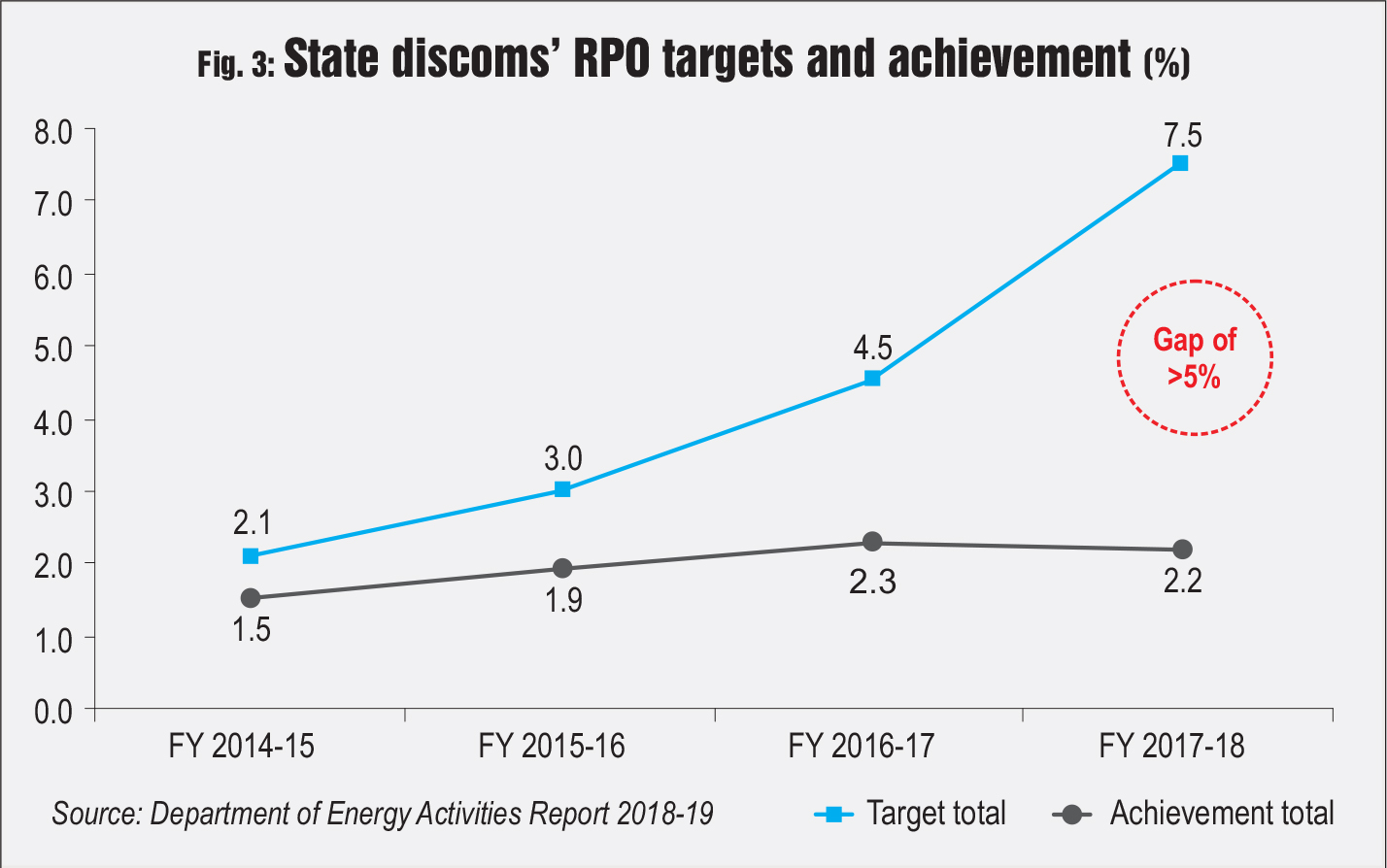 The RPO is imposed on the obligated entities to ensure that a fixed portion of energy, as specified by the state electricity regulatory commission, is procured from a renewable energy generating station. Discoms are important obligated entities as they are responsible for supplying power for usage across the state to various consumers. Fig. 3 shows the total RPO and its compliance by Odisha discoms in financial year 2017-18. The compliance for the year was only 2.2 per cent, which fell significantly short of the set target of 7.5 per cent. The total RPO target for the state for 2020 is 11 per cent. 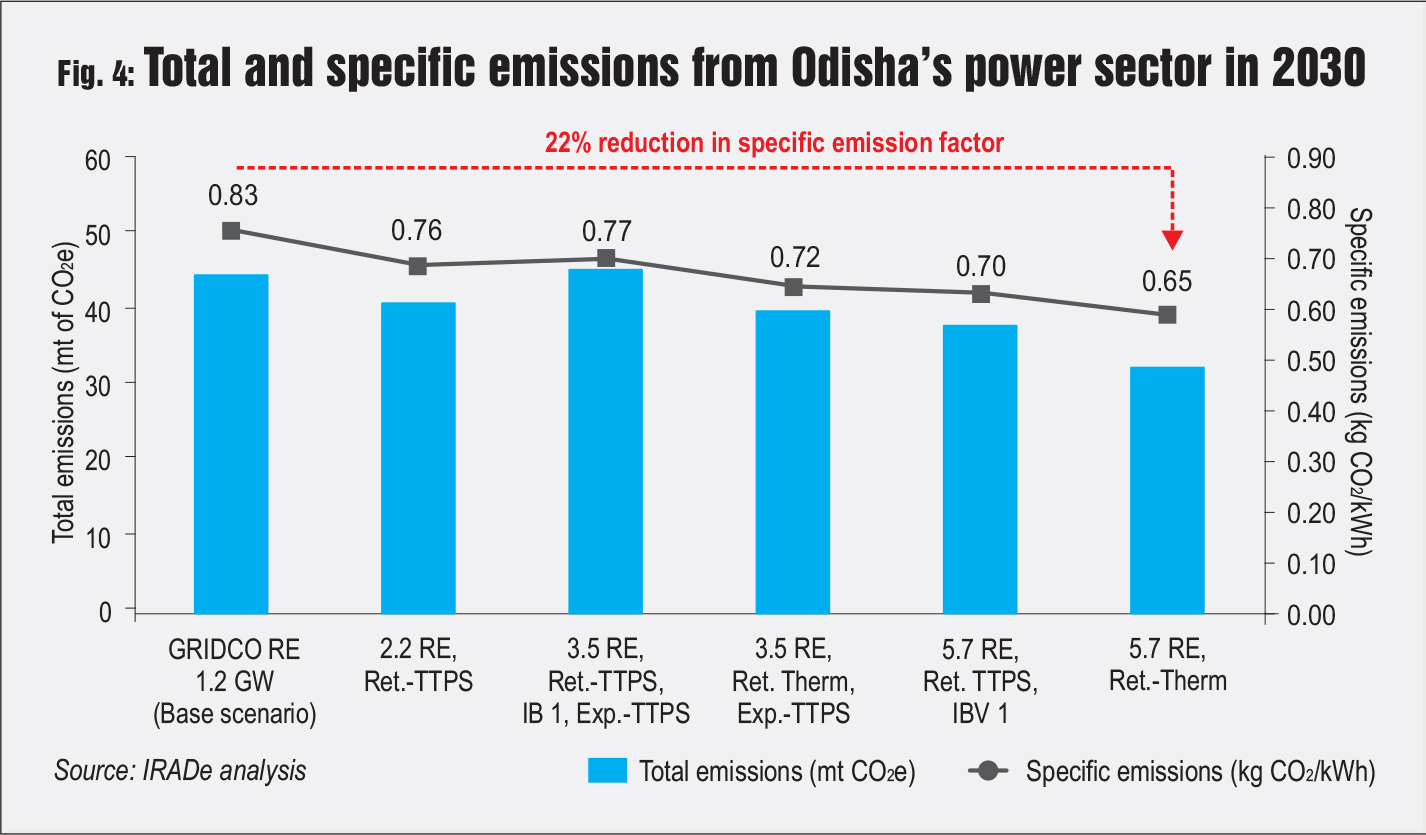 The 19th Electric Power Survey of India report forecasts the electricity demand in Odisha till 2026-27. It also provides electricity demand projections for the years 2031-32 and 2036-37. IRADe researchers made calculations for the year 2030 (NDC target year) based on various scenarios and assumptions (see Table). A progressive decrease in emissions from the base scenario is evident.

Fig. 4 shows the trend of total and specific emissions from the power sector in Odisha in 2030. It is evident that by increasing the renewable energy capacity and retiring older thermal power stations (TPSs) an effective decrease in emissions can be achieved. Fig. 5 gives the installed capacity of non-fossil fuel-based resources in the state (utilities only) by 2030. It is evident that at least 3.5 GW of renewable energy is needed to achieve the NDC Goal 4 target by 2030 in Odisha. 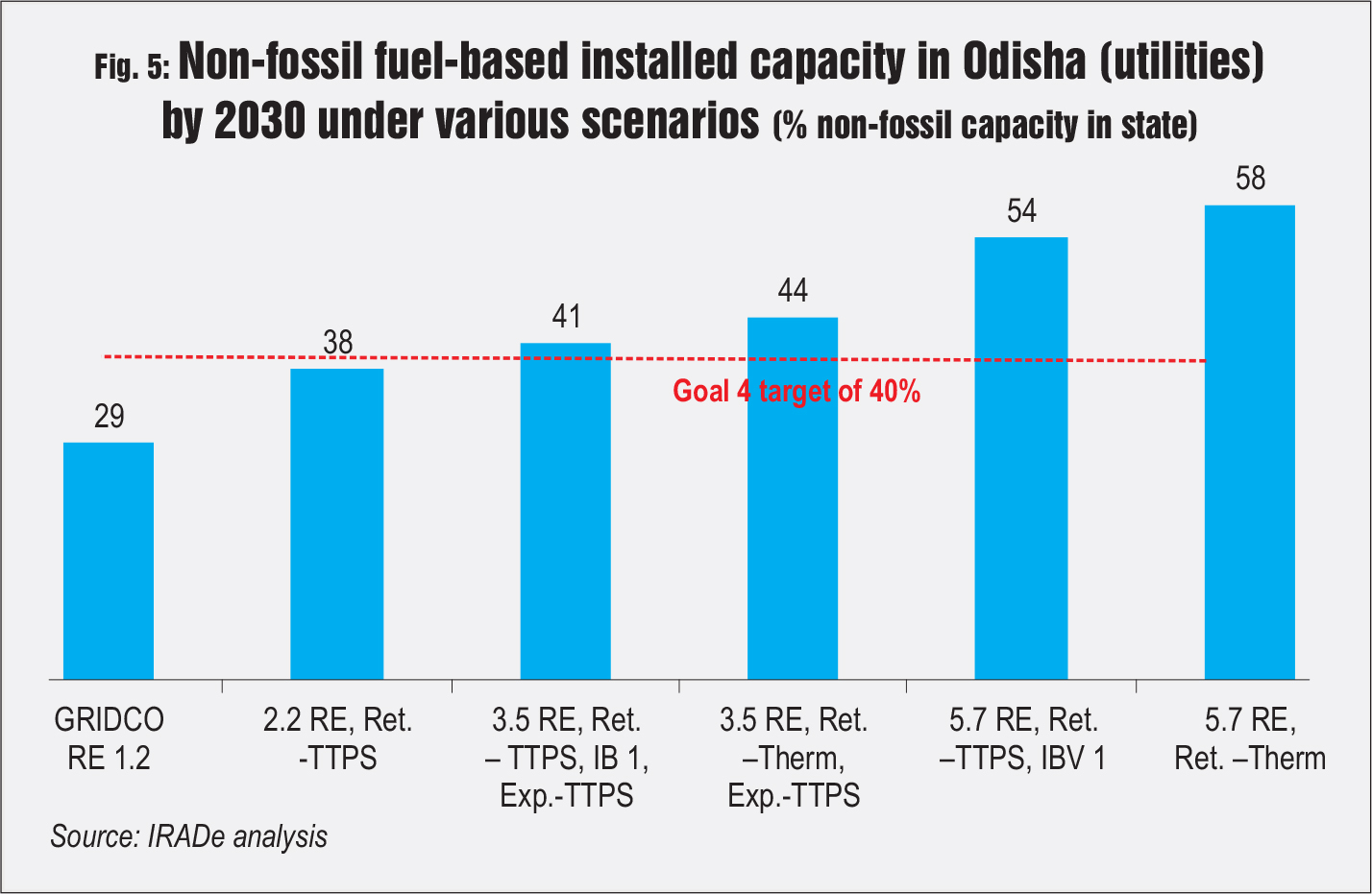 Being rich in minerals, Odisha is home to various industries. Besides, the state is rich in coal resources. Large industries in the state meet their energy requirements through captive power plants (CPPs). An analysis of around 70 per cent sample of thermal CPPs in Odisha was done and it was found that the emission factor of the sample was almost 30 per cent higher than that of the Odisha grid. A scenario study for analysed CPPs in 2018-19 was done by shifting captives to the grid, and by adding additional super thermal capacities and solar capacities in different ratios. 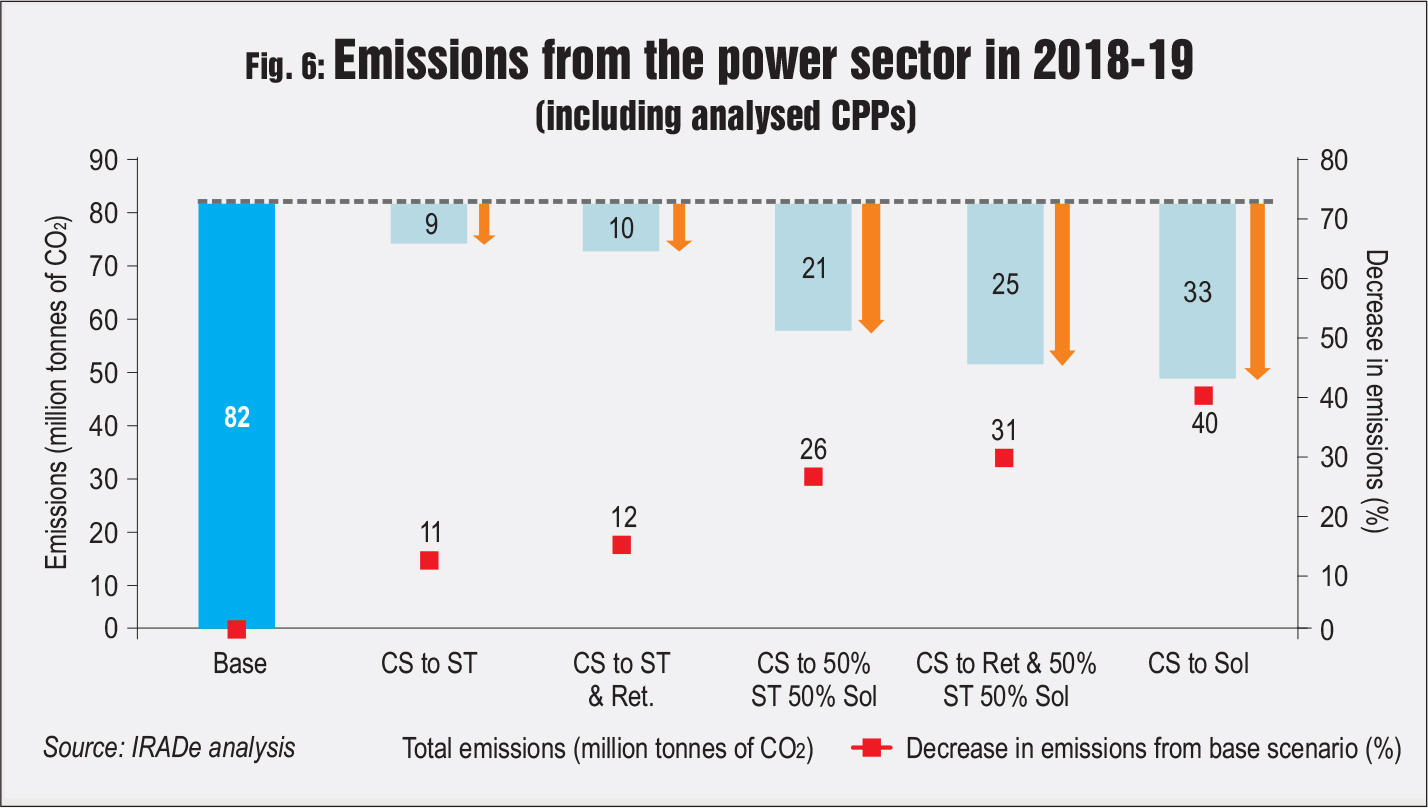 Fig. 6 shows that when all the analysed CPPs are shifted to solar, a 40 per cent reduction in emissions from the base scenario was seen. An economic analysis comparing the tariffs of CPPs with the average charge of high tension (HT) /EHT (extra high tension) in the state revealed that industries will incur huge losses while shifting to the grid.

The average emission factor of the analysed CPPs was found to be higher than grid thermal (coal) power plants by virtue of their size. Thus, it was concluded that there is a potential for emission reduction if the CPPs are shifted to the grid. 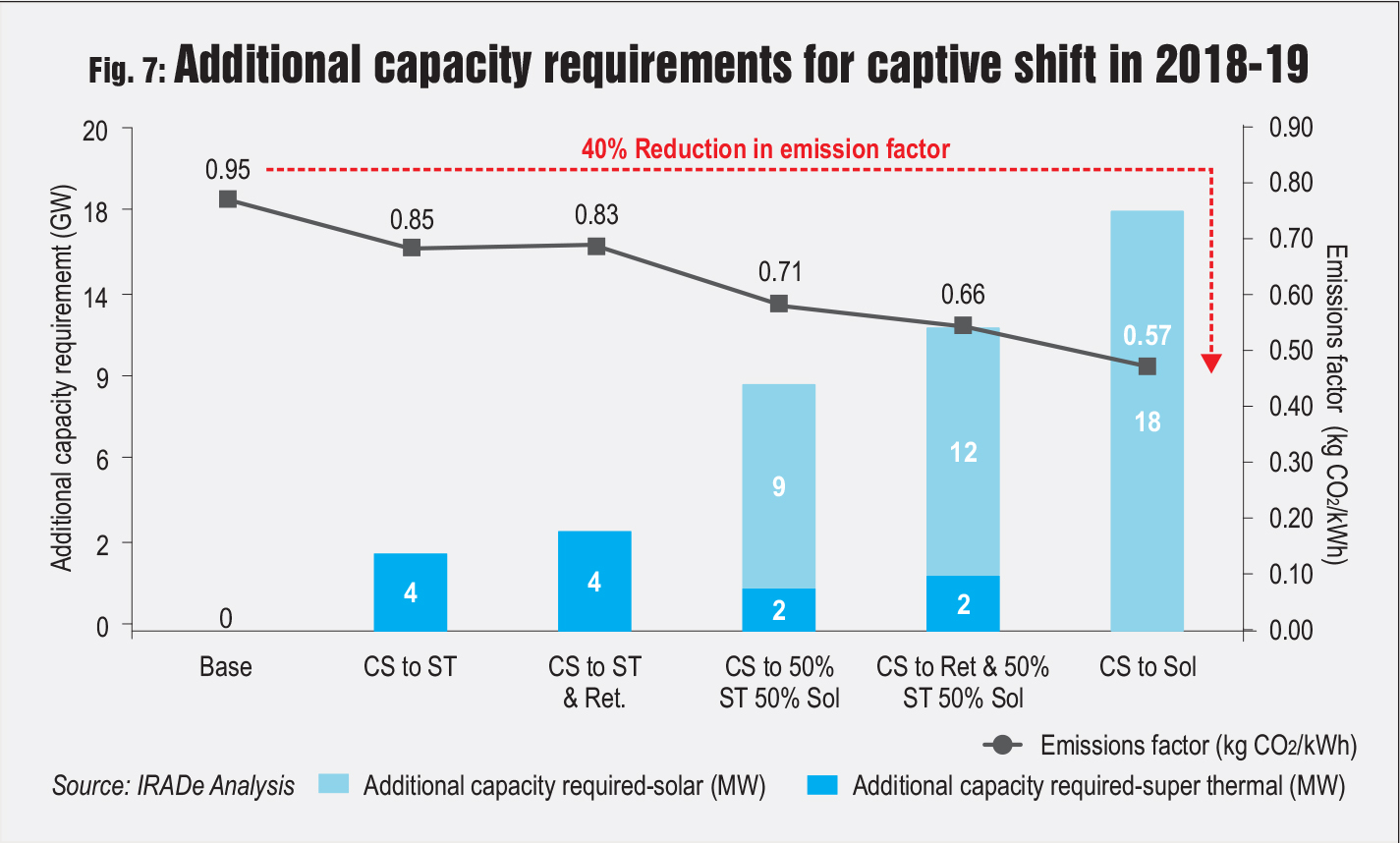 Fig. 7 displays the source-wise additional capacity required in each scenario in 2018-19. The tariff for two 200 MW CPPs was calculated based on the methodology used by the CERC and the landed cost of coal in 2018-19. The first CPP was assumed to be 10 years old in 2018-19 and was termed old, and the second CPP was assumed to be commissioned in 2018-19 and was termed as new. The tariff of these CPPs was compared to the average per unit charge for HT consumers and average per unit charge for EHT consumers in Odisha in 2018-19. 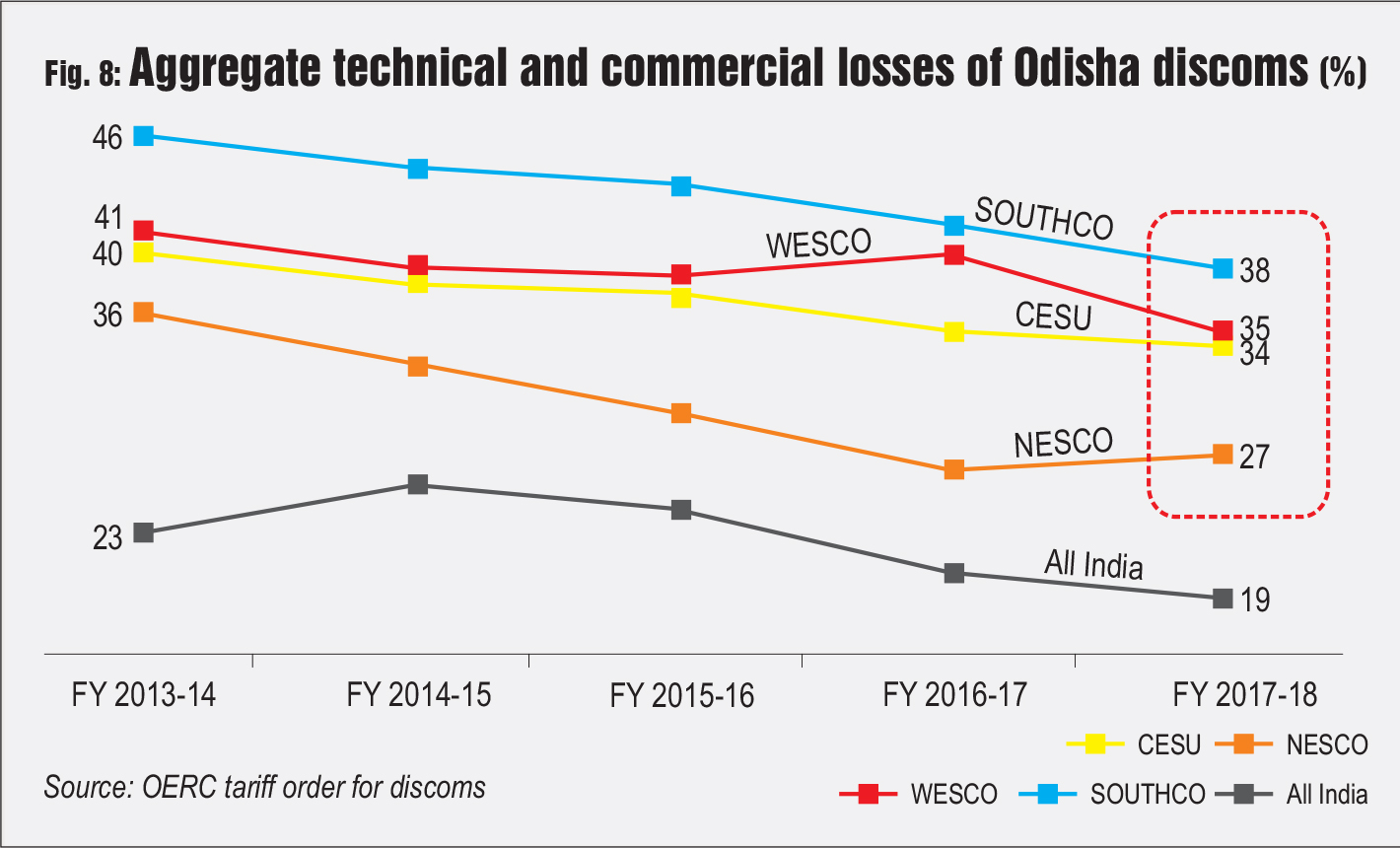 The analysis shows that large industries still have an economic advantage in setting up a new CPP rather than obtaining power from the grid. It is also evident that the industries incur losses even when the cost of power supplied is reduced to the average cost of supply in 2018-19 for Odisha. Overall, around 30 per cent reduction in tariffs is needed for such a shift to take place. The analysis shows that a clear emission reduction potential exists in shifting CPP capacities to the grid. However, losses that firms would incur on making such a move are also staggering. Thus, policy incentives are required to discourage the installation of new CPPs with smaller capacities and encourage old CPPs to shift to the grid.

The aggregate technical and commercial losses (AT&C) in Odisha are higher than the national average. Some of the key reasons for the high losses are lower billing efficiency, lower collection efficiency and defective meter supply in the LT division, which comprises 53 per cent of total sales in Odisha. Other reasons include the non-realisation of billed energy and defective meters in the agricultural sector. An analysis of CESU in 2018-19 revealed that a reduction in technical losses of 10 per cent could abate around 0.6 million tonnes of CO2 annually.

Fig. 8 shows that SOUTHCO has the highest losses among all the four discoms as electricity worth about 40 paise per rupee purchased by the discom is lost. While the losses have come down for all the discoms, the rate of loss reduction has failed to meet the targets identified by the state.

because systems become more efficient and power losses decline. In a high technical loss system as in Odisha, this may translate into better overall results.