The benefits of smart metering extend well beyond the reduction of aggregate technical and commercial (AT&C) losses. Smart meters allow seamless online billing, real-time monitoring of electricity consumption and reduction in billing errors. It can also aid in the introduction of time-of-day tariffs and contribute to the integration of distributed renewable energy. In fact, during the Covid-19 crisis, the discoms have been able to handle their operations smoothly with the help of smart meters.

Energy Efficiency Services Limited (EESL) is spearheading the smart metering drive with an ambitious target of replacing 250 million conventional meters with smart meters under the Smart Metering National Programme (SMNP). EESL is engaged in the installation of 80 per cent of the nearly 12 million smart meters under implementation across the country. According to the company, the use of smart meters has enabled several discoms to achieve 95 per cent billing efficiency and increase their average monthly revenue per consumer by 15-20 per cent.

EESL has also formed a joint venture (JV) with the National Investment and Infrastructure Fund, and IntelliSmart Infrastructure Private Limited, to implement, finance and operate the smart meter roll-out programme for discoms.

So far, nearly 1.46 million smart meters have been installed by the company using the model of demand aggregation, bulk procurement and monetisation of savings. As per the SMNP dashboard, the maximum number of smart meters, 1.1 million, have been installed in Uttar Pradesh, followed by 204,153 in Haryana, 74,044 in Bihar, and about 58,619 in the New Delhi Municipal Council (NDMC) area of the capital. Distribution utilities in these four states have witnessed a 21 per cent increase in billing efficiency and an 11-36 per cent reduction in AT&C losses. Smart meter installations have resulted in a 21 per cent average increase in discom revenues, amounting to Rs 301 per month per meter. In Bihar, prepaid meters have resulted in a 140-150 per cent increase in revenues. In fact, Bihar is the first state in India to use about 25,000 smart prepaid meters. Consumers are, on an average, recharging their prepaid smart meters with a credit of Rs 20 daily. This has resulted in daily recharge revenues of Rs 500,000.

EESL is also in discussions with states such as Assam, Tripura, Jharkhand, Madhya Pradesh, Tamil Nadu, Punjab, Jammu & Kashmir, Gujarat and Karnataka for smart metering. There are plans to install 2 million smart meters in West Bengal, 913,132 in Jammu & Kashmir, and 182,699 in Arunachal Pradesh.

In November 2020, EESL invited bids for a tender to procure 2.35 million smart meters, following the cancellation of a previous order that had been awarded to Indonesia’s PT Hexing owing to concerns over the company’s inability to meet local manufacturing norms. Schneider Electric, Genus Power Infrastructures, HPL Electric and Power, Avon Meters, Linkwell Telesystems, Zen Meter and Allied Engineering Works are some of the companies reportedly competing for the tender. 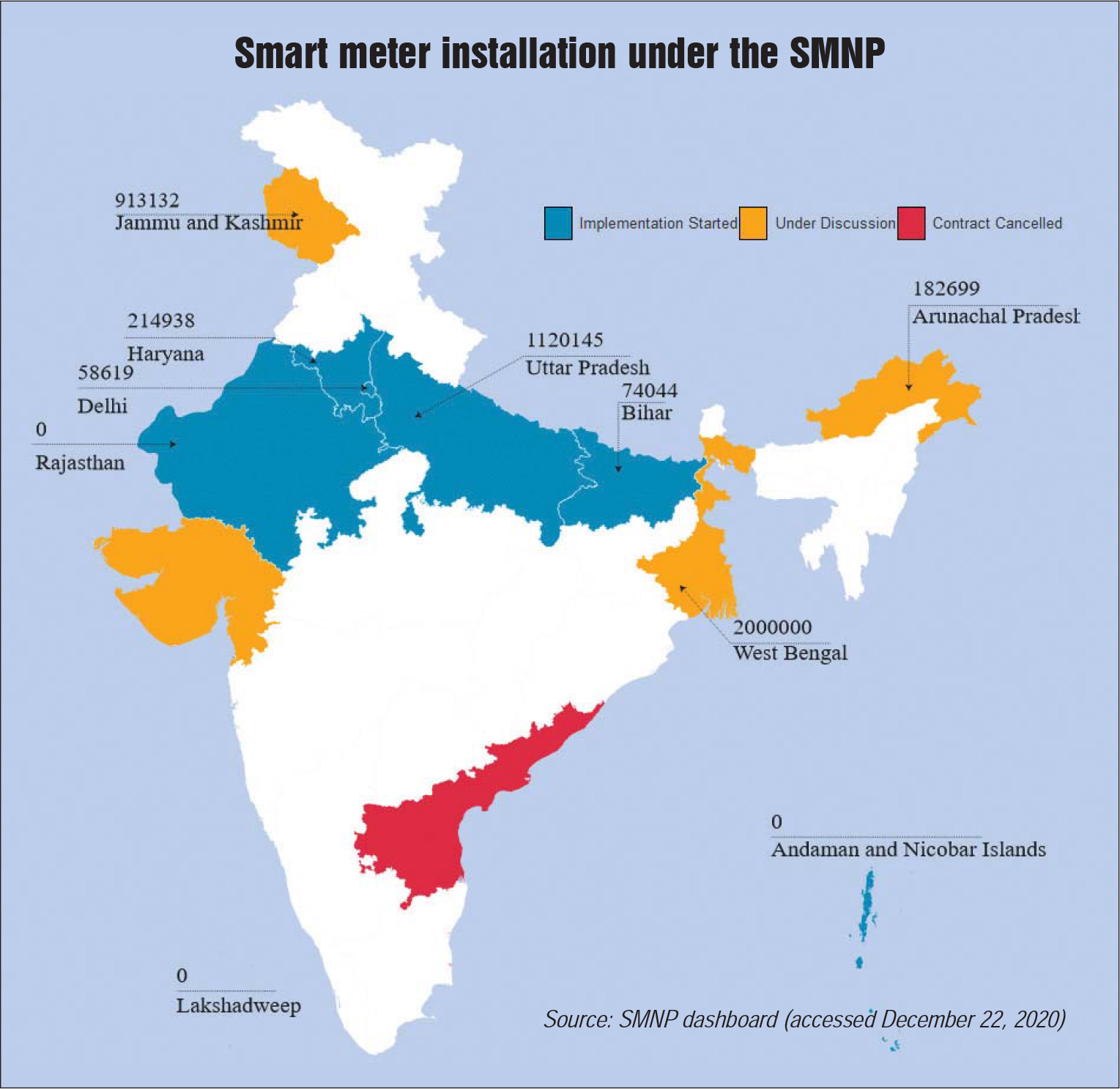 In order to accelerate the adoption of smart meters by discoms, the MoP is working to set up a Rs 20 billion JV for providing a common back-end infrastructure facility (CBIF). The JV will be promoted by four central public sector undertakings – NTPC Limited, REC Limited, Power Grid Corporation of India Limited (Powergrid) and the Power Finance Corporation (PFC). While PFC and REC have approved an equity investment of Rs 1.5 billion each in the JV, NTPC and Powergrid are yet to do so. The CBIF will simplify smart meter roll-outs for discoms by offering a plug-and-play architecture with standardised, preconfigured, pre-integrated, scalable back-end infrastructure.

It will also enable a centralised management information system or reporting of metering data. The facility will be offered to discoms on a software- or solution-as-a-service approach, with only usage fees being charged. Earlier, in July 2020, the MoP notified the model standard bidding document (SBD) for the selection and appointment of AMI service providers (AMISP) for smart prepaid metering on a design-build-finance-own-operate-transfer basis by state power utilities. The model SBD has been structured in two parts – a model request for proposal for the selection and appointment of AMISPs, and a model contract between the state power utility, the AMISP and the selected bidder.

In the same month, the Asian Development Bank signed a $132.8 million loan agreement with the central government for strengthening and modernising the distribution network in Meghalaya, including the installation of smart meters for about 180,000 households.

Madhya Pradesh Paschim Kshetra Vidyut Vitaran Company Limited (MPPKVVCL) also plans to install 350,000 smart meters in five towns in Madhya Pradesh. MPPKVVCL has already implemented a smart metering project entailing the installation of about 140,000 smart meters in Indore Smart City at an approximate cost of Rs 600 million. The project, which is one of the biggest smart metering endeavours in the country, has been functioning successfully. The discom opted for RF-based technology for this project. It has created a distribution network with self-healing capabilities and better reliability, thus helping the utility achieve 100 per cent readability.

Meanwhile, Adani Electricity Mumbai Limited has announced plans to install over 700,000 smart meters. The Maharashtra Electricity Regulatory Commission has approved capital expenditure schemes for the installation of smart meters. Another private utility, Tata Power Delhi Distribution Limited has installed 200,000 smart meters in partnership with Landis+Gyr and Siemens across its domestic, industrial and commercial consumer segments under its AMI project, with an RF canopy network. These smart meters have proved to be extremely beneficial for the discom in raising bills based on actual readings instead of provisional ones during the lockdown in April-May 2020. The company managed to raise over 350,000 bills during this period, and avoided over 150,000 visits to consumer premises per month.

The pace of smart meter installation is expected to pick up rapidly in the coming months, bolstered by the push from the central government, which has mandated the conversion of all electricity meters across the country to smart meters over the next three years. In addition, the benefits demonstrated by smart meters during the Covid crisis are compelling an increasing number of discoms to come forward and adopt the technology.