Revamping metering infrastructure through the deployment of advanced metering infrastructure (AMI) comprising smart meters is one of the key focus areas of discoms. Smart meters can provide meaningful insights into electricity consumption patterns, which could be used to optimise discoms’ power purchase cost, lower aggregate technical and commercial losses, and detect meter tampering, etc. Offering remote connection/disconnection features to discoms, smart meters encourage timely payment of electricity bills and also improve billing and collection efficiencies. Moreover, during the Covid-induced lockdown, smart meters proved to be a silver lining for discoms. According to industry data, in one utility, 95 per cent actual billing was noted in AMI areas as compared to 70 per cent provisional billing in non-AMI areas.

Under the Union Budget 2021-22, the finance minister has announced a Rs 3 trillion reforms-linked scheme for five years for the power distribution segment, which entails installing smart prepaid meters as one of its components, along with feeder separation and system upgradation. This is likely to provide a shot in the arm for smart prepaid meter deployment in the country.

Update on metering under government schemes

SMNP: So far, 1.58 million smart meters have been installed under the SMNP. State-wise, 1.14 million smart meters have been installed in Uttar Pradesh, followed by 246,951 in Haryana, 103,929 in Bihar, and about 58,840 in the New Delhi Municipal Council (NDMC) area of the capital. For NDMC, which became the first utility to install smart meters for all its consumers, the SMNP was successful in connecting over 56,000 consumers, resulting in an increase in average monthly revenue per consumer by Rs 500 and a billing percentage of above 99 per cent during the lockdown.

Apart from this, EESL is in discussions with Assam, Tripura, Jharkhand, Madhya Pradesh, Tamil Nadu, Punjab, Jammu & Kashmir, Gujarat and Karnataka for smart metering. There are plans to install 2 million smart meters in West Bengal, 913,132 in Jammu & Kashmir and 182,699 in Arunachal Pradesh. Overall, smart meters have yielded a 21 per cent increase in billing efficiency and an 11-36 per cent reduction in AT&C losses. At the same time, this has led to a 21 per cent average increase in discom revenues, amounting to Rs 301 per month per meter.

In November 2020, EESL invited bids for a tender to procure 2.35 million smart meters, following the cancellation of a previous order that had been awarded to Indonesia’s PT Hexing owing to concerns over the company’s inability to meet local manufacturing norms. Schneider Electric, Genus Power Infrastructures, HPL Electric and Power, Avon Meters, Linkwell Telesystems and Zen Meter and Allied Engineering Works are some of the companies reportedly competing for the tender. Earlier, in December 2018, French utility EDF had secured a Euro 66 million contract from EESL for the design, installation and integration of 5 million smart meters. EESL has also collaborated with Larsen & Toubro in the past to implement an AMI system for over 5 million smart meters, including the integration and commissioning of 50,000 smart meters for NDMC.

EESL has also formed a joint venture (JV) with the National Investment and Infrastructure Fund and IntelliSmart Infrastructure Private Limited to implement, finance and operate the smart meter roll-out programme for discoms. Set up in 2019, IntelliSmart will enable the implementation of smart meters through the build-own-operate, transfer-model to expedite the deployment, which will replicate EESL’s success with the same model so far. The focus of IntelliSmart would be to improve operational efficiencies for discoms, revenue management, billing efficiency and consumer satisfaction. With a focus on expediting the deployment of smart meters across the country, IntelliSmart is operating at scale by leveraging the expertise and capital of its shareholders, EESL and the NIIF.

Recently, IntelliSmart signed an MoU with Infosys to develop a “Sustainable Energy Digital Platform (SEDP)” to accelerate digitalisation and integrate data analytics across the power sector, enabling greater efficiency. The platform will help unfold data analytics and integrate one common platform for utility (discoms) operations and commercial systems end to end. IntelliSmart plans to partner with discoms to co-develop advanced analytics solutions on their data, tailored to their context.

IPDS: For smart metering infrastructure under the IPDS, a government grant of Rs 2.16 billion has been approved and Rs 74.60 million has been released across the four states of Bihar, Madhya Pradesh, Punjab and Rajasthan. As of September 2020, the progress rate of smart meters under the IPDS is 76 per cent (total sanctioned: 0.16 million) and the progress rate of prepaid meters is 73 per cent (total sanctioned: 0.12 million). 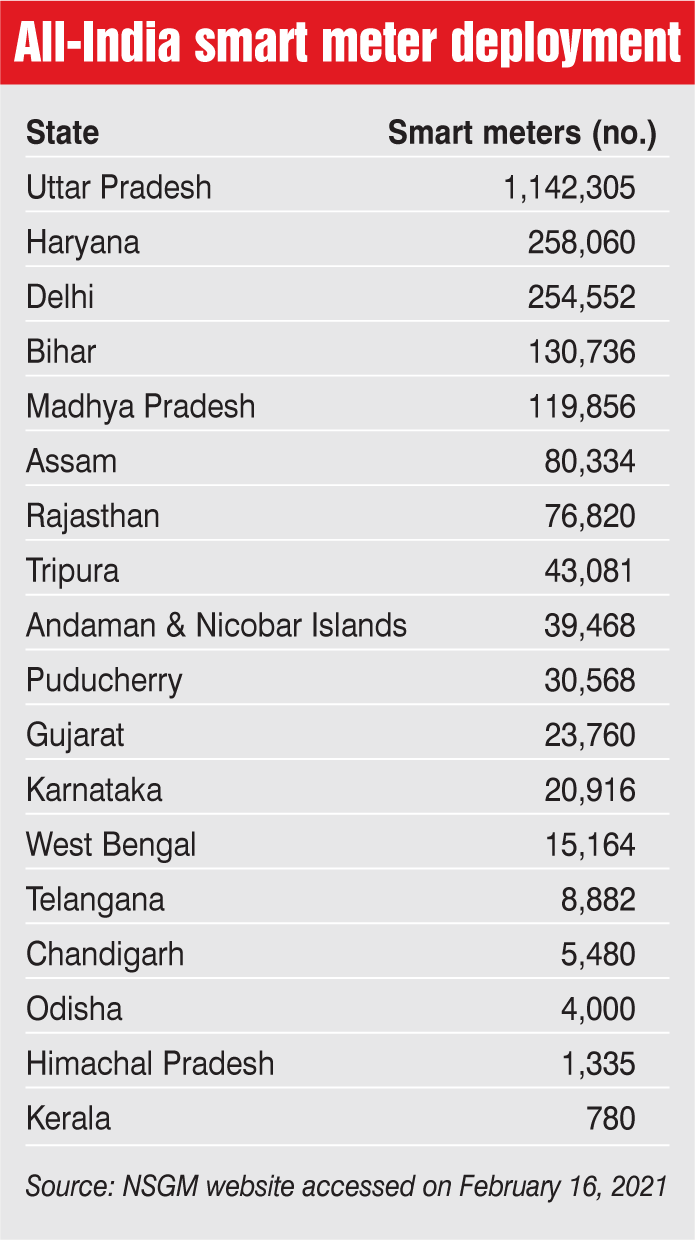 In order to accelerate smart meter deployment in the country, the MoP is working to set up a Rs 20 billion JV for providing a common back-end infrastructure facility (CBIF). The JV will be promoted by four central public sector undertakings – NTPC Limited, REC Limited, Power Grid Corporation of India Limited (Powergrid) and the Power Finance Corporation (PFC). While PFC and REC have approved an equity investment of Rs 1.5 billion each in the JV, NTPC and Powergrid are yet to do so. The CBIF will simplify smart meter roll-outs for discoms by offering a plug-and-play architecture with standardised, preconfigured, pre-integrated, scalable back-end infrastructure. It will also enable a centralised management information system or reporting of metering data. The facility will be offered to discoms on a software- or solution-as-a-service approach, with only usage fees being charged.

In another development, the Asian Development Bank has signed a $132.8 million loan agreement with the central government for strengthening and modernising the distribution network in Meghalaya, including the installation of smart meters for about 180,000 households. Also, in August 2020, Punjab State Power Corporation Limited issued a tender for installing smart meters in Ludhiana. The AMI system will comprise 90,000 single-phase smart meters, 25,000 three-phase smart meters, and 2,500 distribution transformer smart meters.

Meanwhile, Madhya Pradesh Paschim Kshetra Vidyut Vitaran Company Limited (MPPKVVCL) plans to install 350,000 smart meters in five towns. MPPKVVCL has already implemented a smart metering project entailing the installation of about 140,000 smart meters in Indore Smart City at an approximate cost of Rs 600 million. The project, which is one of the biggest smart metering endeavours in the country, has been functioning successfully.

Meanwhile, Adani Electricity Mumbai Limited has announced plans to install over 700,000 smart meters. Another private utility, Tata Power Delhi Distribution Limited has installed 200,000 smart meters in partnership with Landis+Gyr and Siemens across its domestic, industrial and commercial consumer segments under its AMI project. 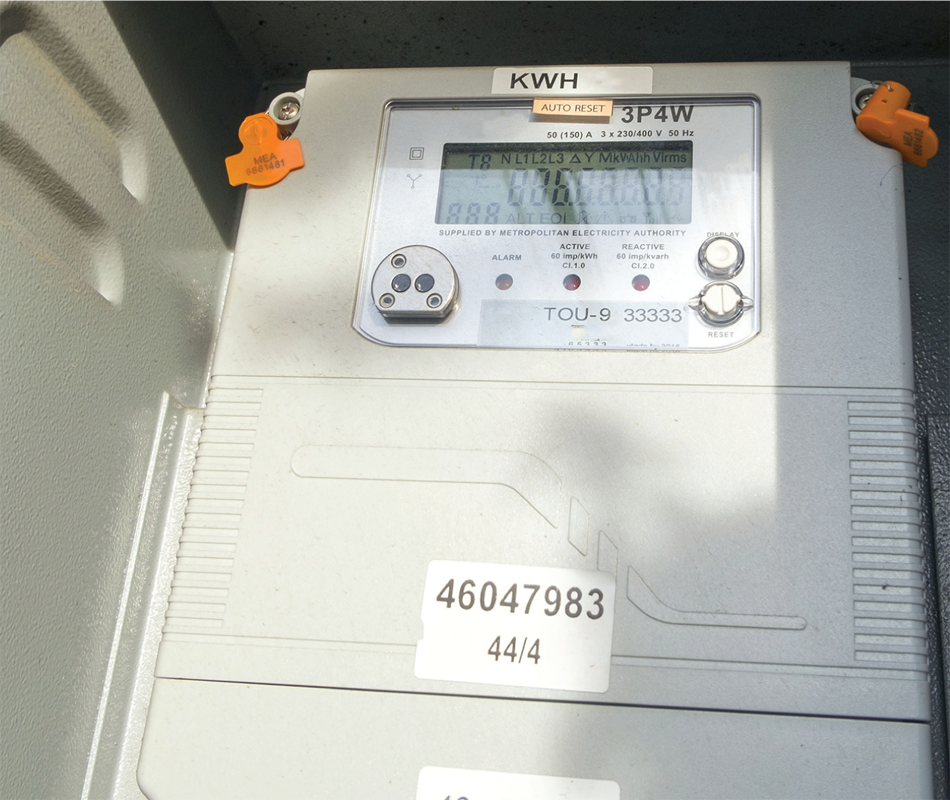 With regard to issues and challenges in the uptake of smart meters, the integration of data from smart meters with the head-end system (HES), the meter data management system (MDMS), and the billing and collection software is a key issue facing utilities. The entire process has to take place seamlessly through the communication backbone and has to be automated through cloud-based services.  Since most operating platforms being used by utilities are based on different software, getting them all on to a standard platform is a challenge. Besides this, with the growing interconnectedness and access to the granular power consumption data, there is an increasing threat to cybersecurity and data privacy.

The deployment of smart meters holds the potential to improve the financial and operational performance of discoms as well as enhance consumer satisfaction. Besides, these are essential for operationalising demand-side management and offering time-of-day metering, and ultimately help in managing peak load and variable renewable energy sources. Smart prepaid meters are likely to play an important role in operationalising direct benefit transfer of subsidy to users.

Going forward, for the successful implementation of smart metering infrastructure in the country, capacity building and awareness generation are essential. Besides, ensuring data privacy and maintaining robust cybersecurity are paramount.