Electrical motors and drives are  an indispensable and key component in several industries, with widespread application in industrial pump-related processes, power generation operations and all assembly line operations, in addition to usage in air conditioners, refrigerators, heating, ventilation and air conditioning systems, irrigation systems, elevators, etc. From a national electricity consumption perspective, industries are responsible for 40-45 per cent of the total consumption, of which motors and drives in industries account for around 28 per cent of total consumption. It is estimated that roughly 70 per cent of electricity consumed by industry is used by electric motor systems. In commercial buildings, 38 per cent of electric energy consumption is for motors.

Given that motors and drives are an auxiliary component supporting various systems and machines, they are often neglected in policy discussions and sustainability-related discussions, despite their overarching relevance from the point of view of efficiency, energy consumption and emissions.

As per a recent white paper by ABB, large motors, drawing more than 375 kW of power, represent only 0.03 per cent of all motors in use and account for about 23 per cent of all electric consumption by motors globally in contrast to the smallest motors, with an output of less than 0.75 kW, which account for just about 9 per cent of electric motor power consumption while accounting for most of the existing motors and drives. Hence, the majority of electric power consumed by motors is used by mid-sized motors. Many of these are larger than necessary for the applications at hand and are often run at full speed, even when the extra power is not needed.

Therefore, much of the policy measures and financial bandwidth are channelised towards improving high and medium power motors, where a transition towards more efficient motors can be achieved more rapidly.

Currently in India, most of the motors are highly energy intensive and inefficient. In fact, the majority of them are below the standard efficiency class (IE1) specified by the International Electro-technical Commission (IEC). Motors categorized as IE1 or IE2 are comparatively inefficient.

It is estimated that 90 per cent of the currently installed motors are at the IE1 and sub-IE1 levels, implying they are energy inefficient and consume considerable electricity, leading to issues such as elevated operational costs for industries and higher emissions by generation companies. Such inefficiency also causes grid stability issues, given the volatile power demand of motors. Further, low-grade motors require regular expenditure on upkeep and maintenance, especially since most of them have been in use for the past 15 years or more. Using inefficient motors thus escalates operations and maintenance costs for industrial units.

About 2 million motors are produced in India annually out of which most of them are of IE1 grade. To reverse this trend, the Department for the Promotion of Industry and Internal Trade issued a quality control order on August 1, 2018, requiring all imported and domestically manufactured motors to conform to the revised standard specified by the Bureau of Indian Standards. This order mandated motors to conform to a base standard of IE2 three-phase motors at a minimum.

The government is cognisant of the fact that mandating industries’ transition to IE2-based motors by introducing Mandatory Energy Performance Standards will only work if there is the requisite financial architecture, as well as institutional support and a robust supply chain ecosystem to expeditiously enable such a transition. Therefore, Energy Efficiency Services Limited (EESL), a public sector company, launched the National Motor Replacement Programme (NMRP) with the specific objective of funding the voluntary replacement of inefficient motors with IE3-grade motors (the highest grade of efficiency). This implies that there is a possibility for India to leapfrog from IE1 and sub-IE1 motors to IE3 motors.

The programme targets the replacement of 120,000 motors in the first phase, with an aggregate annual energy savings potential of more than 5 billion kWh. The reduced demand achieved by higher efficiency consequently implies elimination of capacity requirement equivalent to 600 MW. 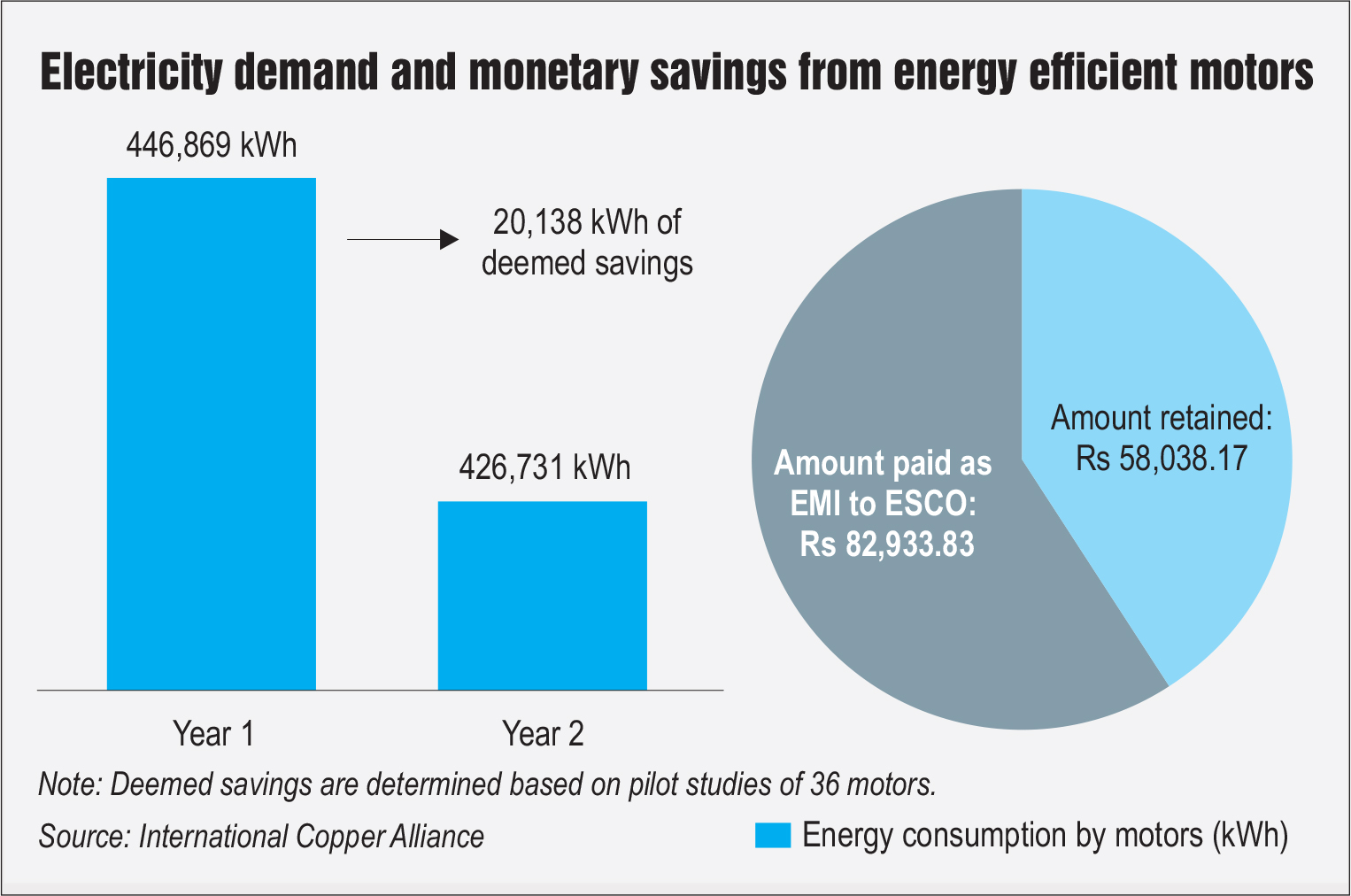 The NMRP aims to achieve the transition to more efficient equipment through two different business models, as described below.

Supply contract/Project management consultancy (PMC) model: In this model, the end-user will bear the entire investment cost, which is mainly the product cost, through open competitive bidding undertaken by EESL. EESL will provide PMC support to the end-users. This support includes inventory collection, procurement of motors and supply of motors to the site, and finalisation of the scheme for replacement. The finalisation of the replacement scheme includes determining details about the number of motors to be replaced, and an estimation of energy savings and the investment requirement.

EESL’s energy service company (ESCO) business model: In general, most of the customers interested in IE3-grade motors are unwilling to purchase them because of their high upfront and interest costs, and scepticism about the quality of higher grade motors. Moreover, efficient equipment, after discounting for its higher upfront capital costs, tends to yield benefits over a decade or so, which leads most buyers to prefer electrical equipment with lower upfront costs, despite the higher lifetime costs.

EESL’s unique business model ensures a successful transition to more efficient motors and electrical equipment with its self-sustaining and virtuous financial cycle. By engineering a financially viable model, EESL strives to drive the adoption of efficient components, while rendering them economically viable for buyers. It also allays consumer concerns about quality and performance by guaranteeing them. Its business model is seen from the lens of the motor replacement programme as given below.

Primarily, EESL functions as an intermediary between willing buyers and sellers of efficient motors conforming to IE3 standards. It aggregates the demand for motors pan-India among all buyers and issues a corresponding bulk purchasing tender, inclusive of quality standards, taking into account the demand it received for these motors. It then selects the seller with the lowest price offering, which, considering the bulk procurement, would be 10-20 per cent lower than the retail price and supplies the motors to the industrial units that had demanded them.

These industrial units will pay the amount over three years, in line with the deemed savings method, wherein they will pay a certain percentage of the amount they saved on electricity bills by utilising these energy efficient motors. These energy savings are then monetised, of which a certain portion is repaid to the ESCO as EMI and the rest of it is retained by the buyer. In this case, 20,139 kWh of energy savings equates to Rs 140,972 of monetary savings in electricity bills annually. The buyer of the motor pays 58.83 per cent of the energy savings (equal to Rs 82,933) as EMI to the ESCO, while retaining Rs 58,040.

This process of repayment of a portion of the monetised energy savings is done for three years, after which the buyer of the motor through the ESCO enjoys the full amount. This thus results in a win-win scenario for all parties involved. 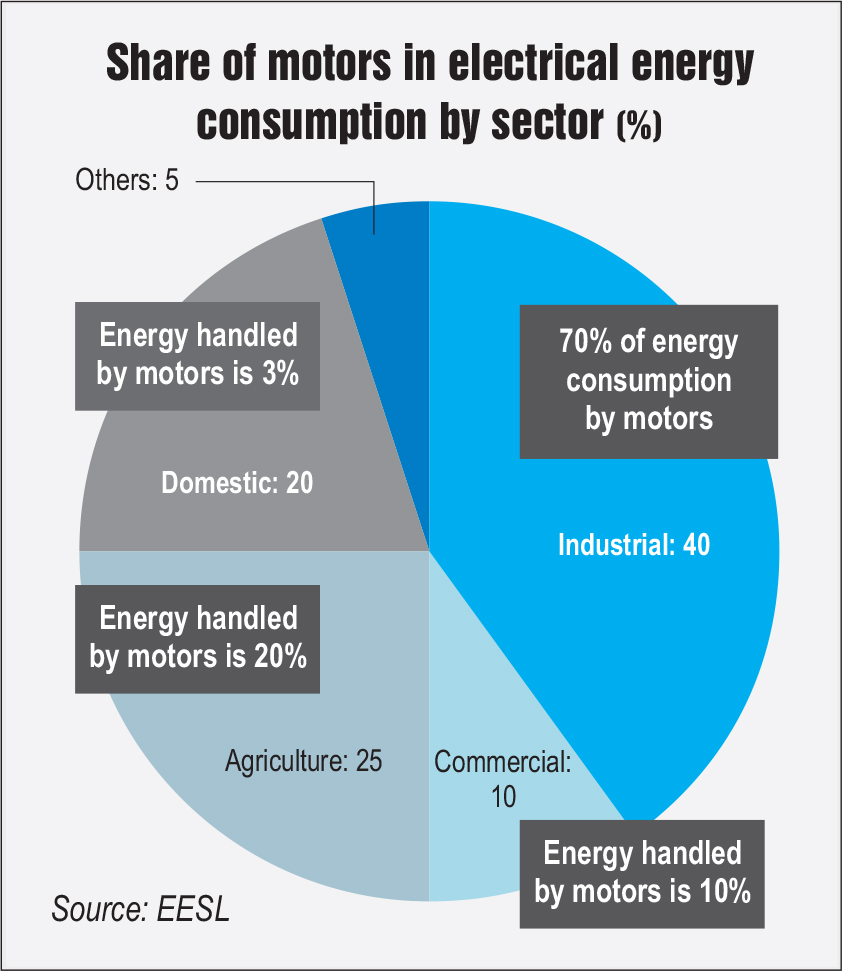 Progress under the NMRP

Mahindra & Mahindra Limited replaced over 390 old inefficient motors, achieving energy savings of over 845,766 kWh annually and signed an agreement to replace another 366 motors. Further, 299 IE3 motors at ACC Limited will be replaced, enabling energy savings of over 2,219,580 kWh, and an emission reduction of over 1,931 tCO2 annually. The company also has an upcoming order for motor retrofitting across 25 ACC plants.

Technological advancements and the role of VFDs

The installation of a variable frequency drive (VFD)-based device raises the system efficiency of normal motors from 28 per cent to 82 per cent; therefore, from a cost-benefit perspective, its installation within induction motors is extremely ideal.

A VFD is an efficiency enhancing device that optimises the speed and torque of operation to match the system’s requirement. It helps the motor to expend minimal energy in adjusting speeds. Commonly it is done by combining induction motors with pulse-width modulated VFDs. When added to the existing motor of a pump, fan or compressor, a variable speed drive can typically reduce power consumption by 25 per cent.

The newer generation of motor models, integrating the advances in solid state electronics, has improved the capacity and design of drives, thereby providing excellent power density and permitting synchronous speed operations without any loss in the rotor. This allows the motor to maintain efficiencies at lower speeds and partial loads with minimal bearing and winding temperature rises, and yielding a power factor of above 90 per cent.

It is notable that this is a relatively well-known technology, considering that currently 23 per cent of industrial motors worldwide incorporate VFD-based technology and this figure is expected to rise to 26 per cent over five years. However, considering the enormous benefits of this device, the government should consider promoting the adoption and installation of this equipment through policy measures and a financial stimulus.

Much of the inefficiency in motors is attributable to the utilisation of motors of a higher capacity than the actual requirement. Thus, changing the motor so that its output corresponds to the maximum power required for a task would in itself represent a major step towards achieving greater energy efficiency. This would require the installation of smaller motors for specific tasks, while replacing larger motors, thus increasing the complexity of the system. However, with real-time monitoring by smart sensors, these issues can be mitigated to a large extent.

Installing condition monitoring sensors directly on motors can be expensive or even impossible in some cases. However the SAM4 predictive maintenance solution has been designed to analyse the current and voltage data from inside the motor control cabinet, and it recognises patterns and detects developing faults through machine learning. 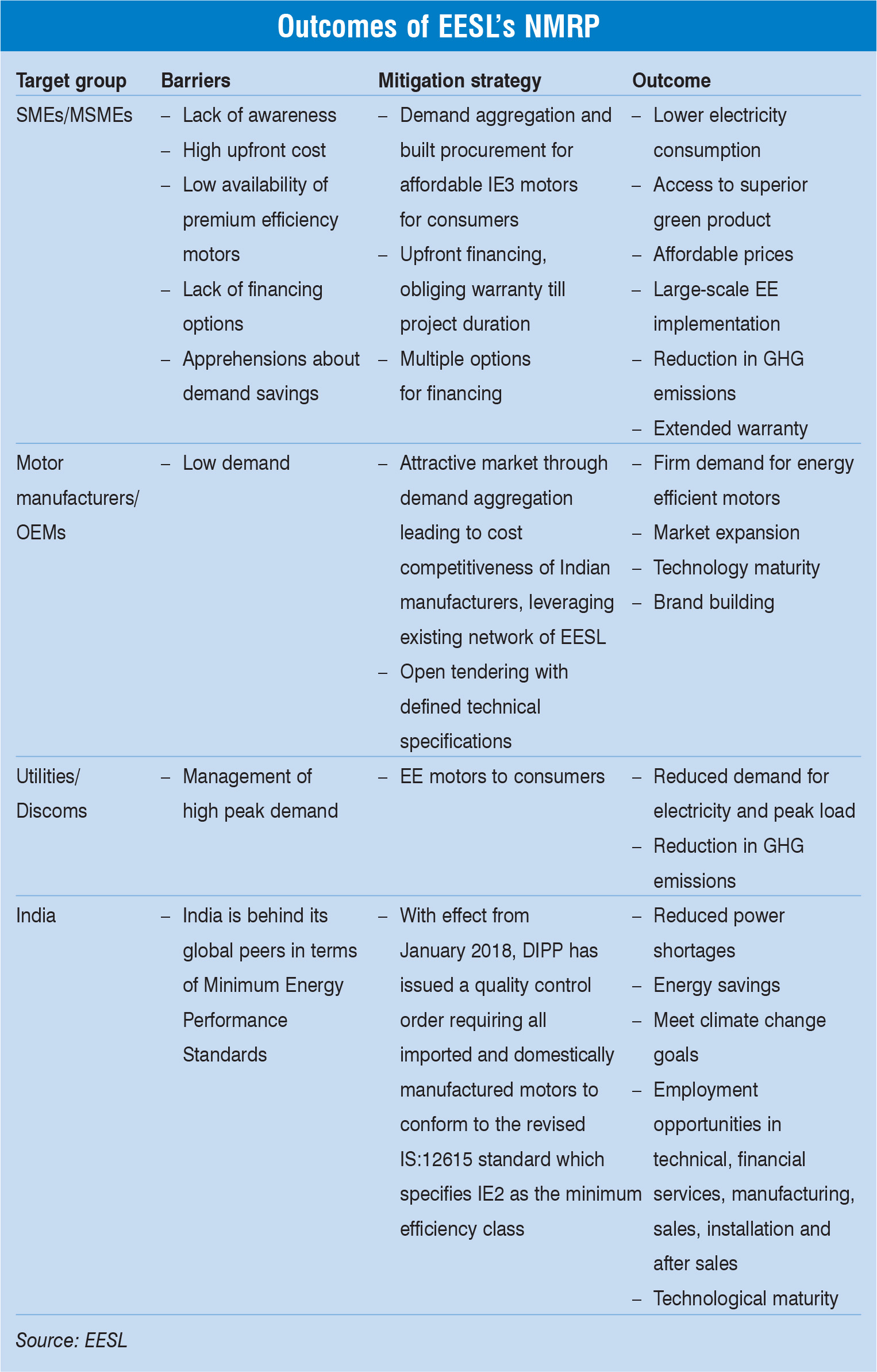 The fundamental challenge is in accelerating the replacement of old and inefficient motors with IE3-rated motors, in order to achieve which the decision-makers and government regulators would have to incentivise and promote their adoption. Moreover, the government would have to encourage the development of a supply chain ecosystem for motors without which there would be problems relating to component availability for motors of the newer generation.

Besides, investors and manufacturers need to acknowledge that sub-IE1 and IE1-based motors are obsolescent while focusing on capital expenditure relating to research and development (R&D) and manufacturing of the IE2 and IE3 generation of motors. Manufacturers and investors need to accordingly allocate their resources in anticipation of bringing about this transition.

On the demand side, often customers, primarily micro, small and medium enterprises (MSMEs), are unaware of ESCO-based schemes (where the upfront costs are borne by the ESCO) and thus they forgo the purchase of more efficient motors due to the high initial cost of IE3 motors. Therefore, the government and other associated entities need to promote these schemes, especially the NMRP at the point of sale of these motors.

By promoting their adoption through tax incentives, public investment, and system-based regulatory imperatives, governments can spur further private investment and research and move the world closer to achieving the climate goals established by the Paris Agreement. In essence, raising the efficiency of motors and drives would lower the consumption of electricity and reduce emissions, thereby yielding enormous economic and ecological dividends.

The government’s mandate, requiring all new motors sold since 2018 to be IE2 or higher rated, along with EESL’s twin business models of providing financing for motor procurement, will drive the adoption of more energy efficient motors. This will inevitably have multidimensional benefits for the electricity sector, as it will change the domestic electricity consumption mix, make electricity consumption more energy efficient, render the grid more stable from volatilities, and reduce carbon emissions by generation companies.