The government regards the country’s electric vehicle (EV) industry as a sunrise sector, and has been taking several policy actions to promote its large-scale adoption. Its latest initiative is a unique campaign, launched last month by the Ministry of Power, called “Go Electric”.

The campaign, being spearheaded by the Bureau of Energy Efficiency (BEE), is aimed at creating awareness on the benefits of e-mobility and EV charging infrastructure, at the state, field, and pan-Indian levels. The objective of the campaign is to build confidence in consumers, utilities, discoms, state agencies, EV manufacturers and all other stakeholders in the EV industry through workshops, seminars, etc. over the next one year ahead of its planned roll-out.

Emphasising the importance of the campaign, Amitabh Kant, chief executive officer, NITI Aayog, who was present at its launch, stated that this was the “need of the hour”. “India has a massive opportunity to go electric. In the next four years, India should aim to go 100 per cent electric on two- and three-wheelers, which constitute 80 per cent of the total automobile sales in the country. These are low-hanging fruit to achieve size and scale.”

With India setting ambitious national goals of EV30@30, which targets achieving 30 per cent share in new sales for EVs by 2030, the Go Electric campaign is expected to be an enabler in improving EV acceptance. India currently has a low stock of EVs on the road, with EVs contributing to less than 1 per cent of the total vehicles sold in the country (compared to 2.6 per cent globally as of 2019).

Besides the Go Electric campaign, the government has rolled out a number of other policies and programmes to pave the way for promoting EVs. Charging infrastructure has been a critical area of focus for the government, given that the EV growth story hinges on it.

One key measure has been the Ministry of Power’s (MoP) clarification that charging infrastructure does not require a licence under the Electricity Act, 2003. Guidelines for charging have also been issued by the government. Tariffs for supply to public charging stations are to be determined by the appropriate regulatory commission under the guidelines. In 2020, an amendment was issued regarding tariff capping for supply of electricity to public charging stations at 15 per cent of a state’s average cost of supply. Moreover, the guidelines  cover aspects such as captive charging stations and battery swapping, which have been welcomed by the industry for bringing in clarity. The Central Electricity Authority (CEA) has also issued amendments to the technical standards pertaining to grid connectivity as well as safety of supply to charging stations. 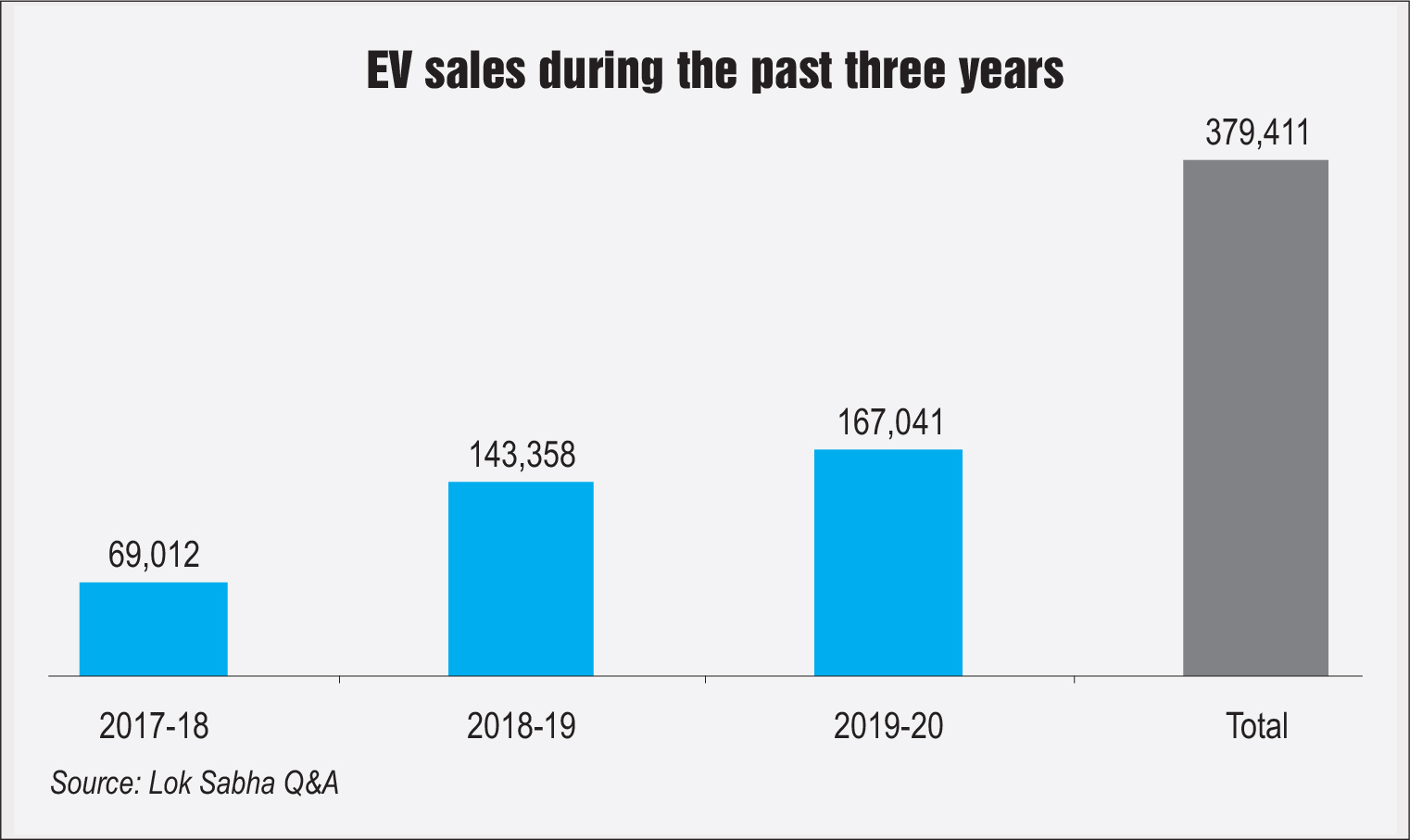 In order to address range anxiety issues, the phase-wise installation of an appropriate network of charging infrastructure has been proposed under the MoP guidelines. The government is working on a hub- and -spoke model so that charging infrastructure can be installed in cities with a million-plus population before taking it forward to other cities. The government is also working in close coordination with urban local bodies and landowning agencies to facilitate suitable land for the installation of charging stations in 3 km x 3 km grids in identified cities.

Apart from this, the government is working with district authorities to set up charging centres. The Ministry of Housing Affairs has also issued by-laws for urban redevelopment plans and implementation guidelines for EV charging in commercial and residential buildings.

Supporting the government’s plans are leading power sector PSUs, which are taking the lead in setting up charging infrastructure. Energy Efficiency Services Limited (EESL), Powergrid and NTPC have been engaged in the installation of charging stations. While NTPC has so far installed 150 public charging stations, EESL has installed around 141, and Powergrid has set up about 14. 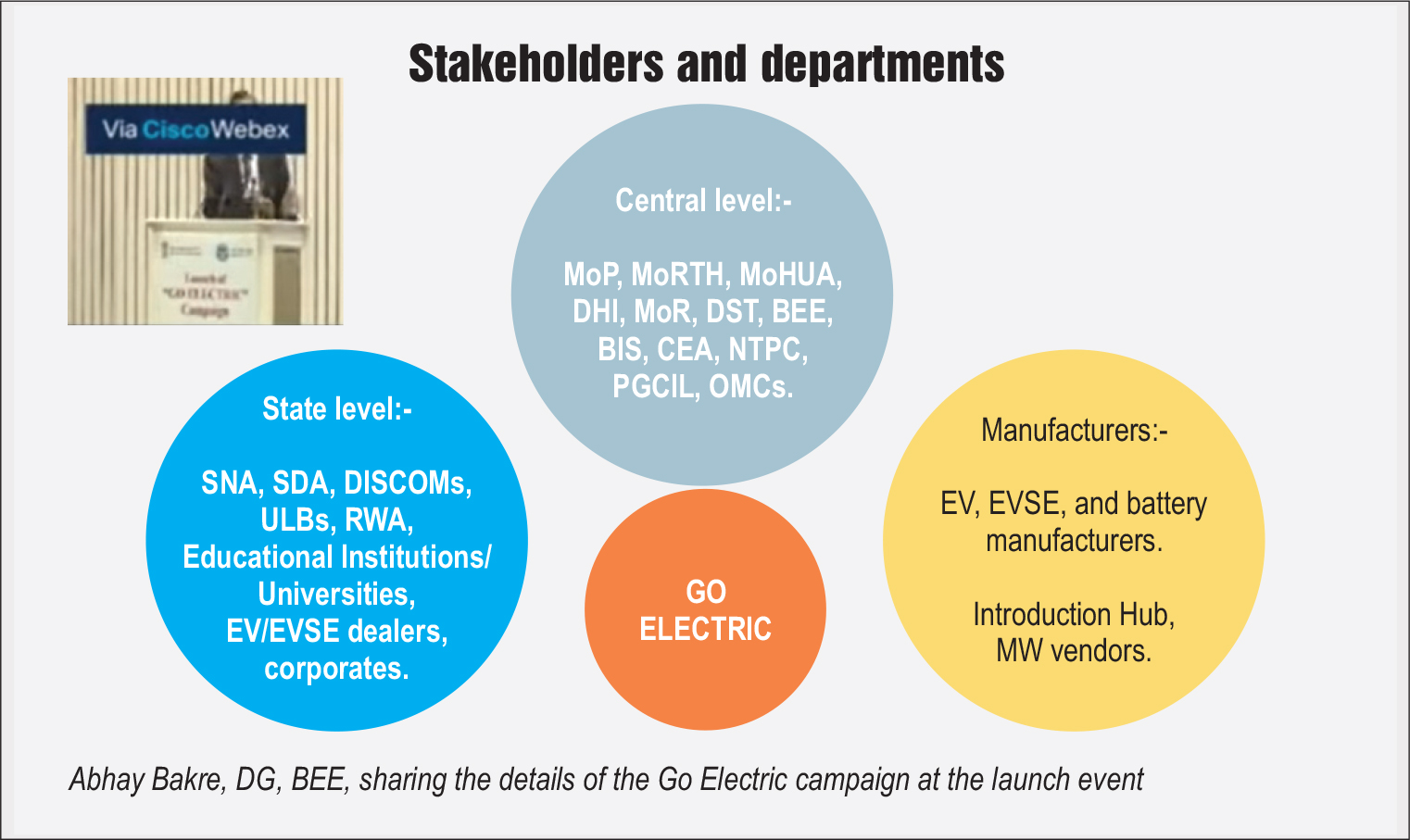 Also on the radar

It is not just EVs that are on the government’s priority list under the Go Electric campaign. The campaign is also looking to promote electric cooking. According to a NITI Aayog study, India’s average annual consumption of eight to ten LPG cylinders of 14.2 kg each is equivalent to electricity consumption of nearly 4 kWh per day. Therefore, at prevailing electricity prices, the electric solution would cost about the same as the LPG solution.

The government does not have any schemes to promote e-cooking thus far. However, it is looking at providing subsidies for electric cooking equipment to promote uptake. Further, the BEE is expected to come out with standards for electric cook stoves by September 2021, for which it is working closely with the Bureau of Indian Standards.

Hydrogen fuel cell buses for commuting is another area the government is looking at. It plans to start such services from Delhi to Jaipur soon, and will gradually experiment with running electric buses on the same route, the power minister, R.K. Singh, noted at the Go Electric campaign launch event. A feasibility study is currently under way to test the viability of fuel cell buses for intercity commute, he added.

Setting up at least one e-charging kiosk each at around 69,000 petrol pumps across the country was another key announcement made last year. This move is expected to significantly scale up charging infrastructure.

Further, to support the transition to EVs, a number of state governments have introduced EV policies of their own, offering fiscal and non-fiscal incentives. As per a recent World Resources Institute report, a total of 14 states have notified or drafted EV policies as of January 2021. These are Karnataka, Delhi, Kerala, Maharashtra, Uttarakhand, Tamil Nadu, Andhra Pradesh, Madhya Pradesh, Uttar Pradesh and Telangana. Besides, Bihar, Chandigarh, Punjab, Haryana, Gujarat, Assam and Himachal Pradesh have also drafted EV policies that are awaiting state cabinet approvals.

Despite the policy push, there are still a number of pain points that need to be addressed in order to meet the major electrification targets. A recent NITI Aayog report states that the quantum of capital and finance required for India’s EV future is considerable. The estimated cumulative capital cost of the country’s EV transition between 2020 and 2030 is Rs 19.7 trillion, across vehicles, charging stations and batteries.

The high cost of EVs compared to their internal combustion engine counterparts is a key deterrent to EV uptake. Even though battery costs have been declining at a rapid rate, from an average of $280 per kWh in 2014 to $110 per kWh in 2020, India is still heavily reliant on imports. To address this, the government’s Atmanirbhar Bharat scheme has placed new emphasis on promoting local manufacturing, and the government recently announced a five-year, $19.7 billion production-linked incentive scheme for 10 key sectors, including $2.4 billion for ACC batteries and $7.7 billion for automobiles and auto components.

Addressing consumer concerns about EV range will be another challenge. This is because charging infrastructure is still being built up in most cities. Over 900 public charging stations have been installed in the country as per the latest BEE data, and another 2,600 are in the process of being installed.

Meanwhile, for electric cooking, the areas that will need attention are quality and reliability issues because of the lack of indigenous standards (given the huge voltage fluctuations, especially in rural areas). 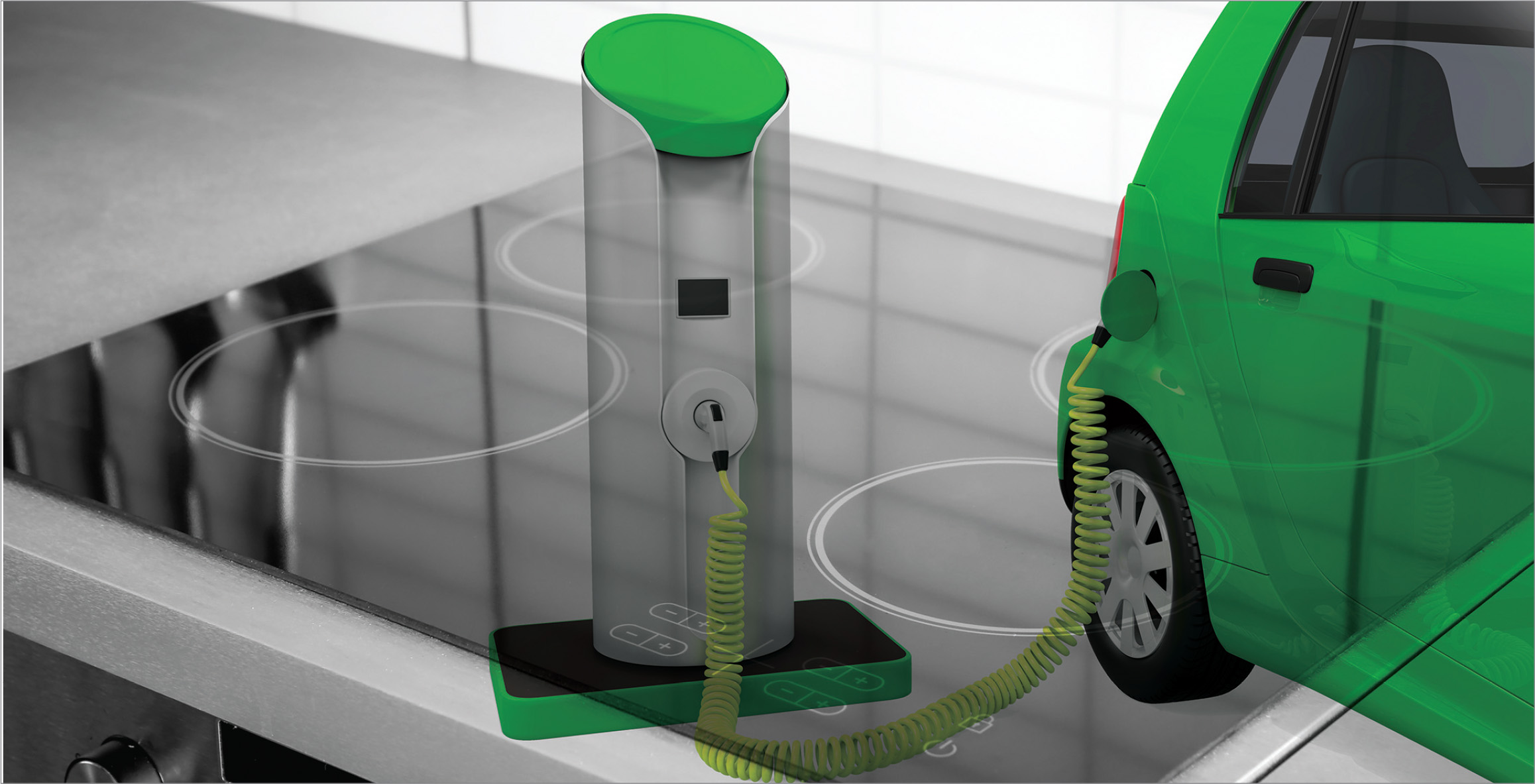 But it isn’t all gloom and doom, and India’s EV outlook does appear promising. According to an independent study by the CEEW Centre for Energy Finance, the EV market in India represents a $206 billion opportunity by 2030, if India maintains steady progress and meets its ambitious 2030 target.

The case for a greater push to EVs is strong, as this will help reduce the imports of petroleum products and gas, curb pollution, promote energy security and move the country closer to its net zero goals. Apart from this, India’s electrification targets also present an opportunity to shore up power demand. Further, a shift to electric cooking would help generate fresh demand for electricity. The substitution of fuels for cooking and heating with electricity will also help improve India’s low per capita power consumption of around 1,200 kWh, as well as improve the plant load factors of power plants.

For now, the new campaign seems to be a step in the right direction in engaging with the appropriate stakeholders and achieving long-term outcomes for delivering clean energy.