In a key development, in April 2021, the Ministry of Environment, Forest and Climate Change (MoEFCC) extended the timelines for complying with the emission norms for coal-based thermal power plants (TPPs) by one to three years. As per the revised timeline, TPPs within a distance of 10 km from the National Capital Region (NCR) and TPPs in cities with more than 1 million population need to comply with the new emission norms by December 31, 2022, whereas  TPPs in non-attainment cities and those within 10 km of critically polluted areas need to comply by December 31, 2023. Meanwhile, TPPs in the remaining areas have to comply with the norms by December 31, 2024. The new rules have introduced a penalty mechanism for non-compliant operations by power plants beyond the specified timeline.

As per the Environment (Protection) Amendment Rules 2021, the power stations will be divided into three categories. Category A TPPs, comprising plants within a 10-km radius of the NCR or cities that have a million-plus population, are required to meet the emission norms by December 2022. Category B plants are within 10-km radius of critically polluted areas or non-attainment cities, and have to meet the norms by 2023. Meanwhile, Category C is made up of the rest of the plants, which have been given an extension till 2024. A task force will be constituted by the Central Pollution Control Board (CPCB) to categorise TPPs in three categories on the basis of their location. Apart from this, TPPs declared to retire before December 31, 2025 are not required to meet the specified norms. Such plants need to submit an undertaking to the CPCB and the Central Electricity Authority (CEA) for exemption on the ground retirement. Such plants shall be levied environment compensation at the rate of rupees 0.20 per unit electricity generated in case their operation is continued beyond the date as specified in the undertaking.

To recall, the MoEFCC had revised the emission norms for particulate matter (PM), sulphur dioxide and oxides of nitrogen for TPPs in December 2015, mandating TPPs to install emission control systems by December 2017. However, the deadline was pushed to December 2022 for all power stations in the country in view of implementation issues and challenges. However, power stations in the NCR were required to comply with the revised norms by December 2019. Earlier this year, the MoP requested the MoEFCC to extend the deadline for all TPPs from 2022 to 2024, citing delays due to various reasons, including the coronavirus pandemic and import restrictions. 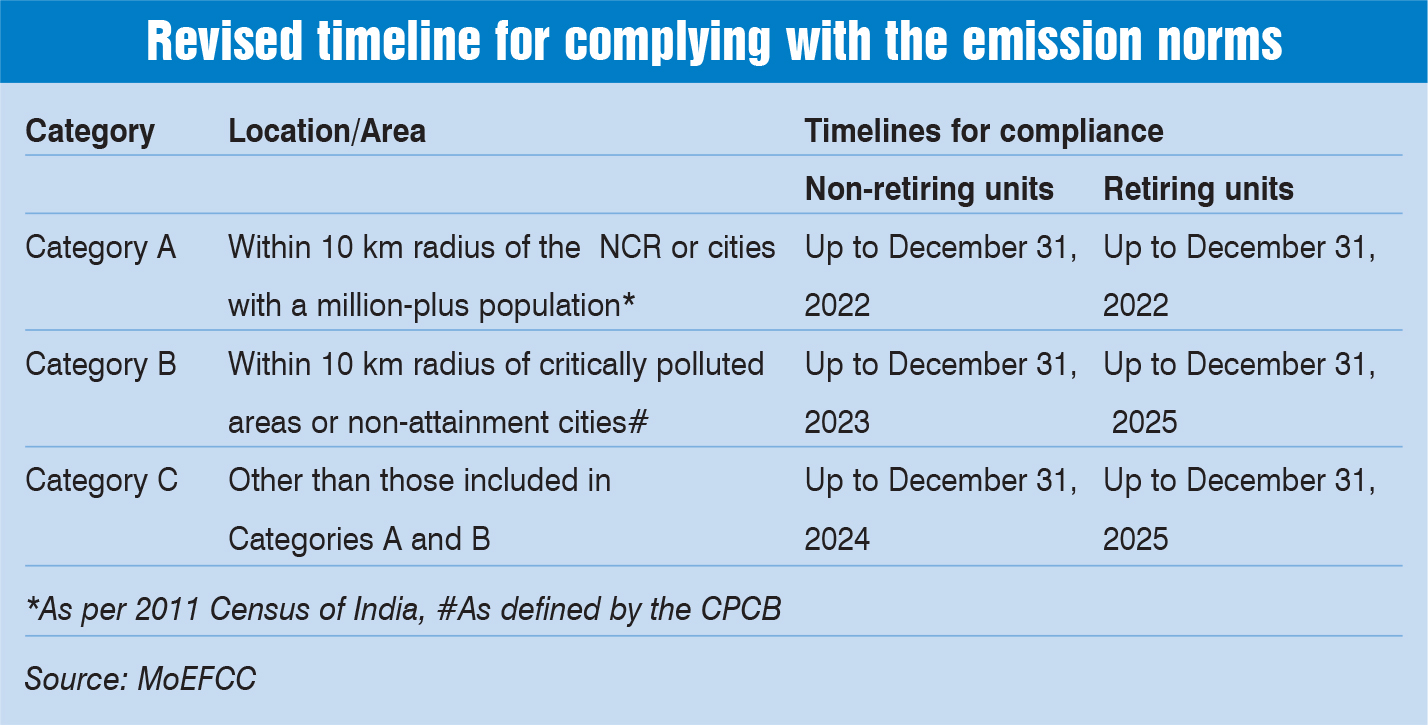 With regard to the cost of FGD systems, the cost per MW quoted by suppliers like BHEL, GE Power and L&T has varied from a low of Rs 1.93 million per MW to a high of Rs 9 million per MW for the tenders issued by NTPC Limited. The variation can be attributed to the size of the unit, the number of units of the project, the vintage of the project and its locations. Overall, the cost for 500 MW units has largely been in the range of Rs 4.2 to 5.3 million per MW. At Rs 5 million per MW, the levellised cost of generation is estimated to have an impact of 15-16 paise per unit, including the impact of additional O&M cost and higher auxiliary consumption. There will also be additional energy charges towards reagent consumption. The power generation companies will have to pass on the higher cost of generation to the distribution utilities under the change in law mechanism in the PPA.

The Central Electricity Regulatory Commission (CERC) has already identified the expenditure required for compliance with the revised environmental norms as a “change in law” event. Furthermore, in September 2020, the CERC floated a staff paper on the mechanism for compensation for competitively bid thermal generating stations for change in law, on account of compliance with the revised emission standards of the MoEFCC. Based on the comments/suggestions in response to the staff paper, the commission has now floated a draft order on a compensation mechanism for these plants.

The FGD market in India is currently evolving and there is limited availability of vendors. The overbooking of suppliers has resulted in an increase in manufacturing time for FGD equipment. There is a dependency on imports from neighbouring countries, and certain import restrictions have also been imposed. With regard to equipment availability, the domestic manufacturing capacity is not adequate for equipment such as booster fans, slurry RC pumps/gas cooling pumps, oxidation blowers, wet limestone grinding mills, slurry pumps, agitators, gypsum de-watering systems, mist eliminators and spray nozzles. Meanwhile, domestic manufacturing is not available for equipment such as borosilicate glass block linings with adhesive and primer for wet stack, spray nozzles, rubber lining for absorber tanks, and auxiliary absorbent tanks and slurry tanks.

Apart from this, there are a number of financial challenges for developers as well. Taking an average price of Rs 5.5 million per MW, the capex requirement for installing an FGD (for 170 GW of existing thermal capacity, 10 GW of commissioned capacity after the preparation of the phasing plan, and 58 GW of under-construction capacity) is estimated at Rs 131 trillion. Private plants, in particular, face funding issues due to stressed balance sheets. Another challenge pertains to the availability of quality limestone and the long distance transportation cost of the raw material. The disposal of residual gypsum is another challenge as a readily available market for by-product is not available.

To conclude, the extension in timeline will provide a relief to TPPs, especially in the private sector, given the challenges faced by these plants in securing funding and equipment to comply with the emission norms. However, going forward, strict adherence to the implementation timeline is desired. To this end, a time-bound approval process for additional tariff under change in law and the availability of equipment from domestic sources are paramount.