companies must identify and prioritise opportunities to improve coal-fired units based on their expected returns, and the impact of operating at low loads on their business objectives.

Even though thermal power plant load factor (PLF) has dropped by 2 per cent compared to last year and is expected to drop further this year due to Covid-19, a recent report indicates that large thermal power plants can provide a competitive advantage, making existing units more flexible and safer during low load operation.

The fundamental question is: what improvements can make coal power plants even more competitive in today’s energy markets in terms of despatch, capacity, availability and emissions?

Currently, load despatch centres are looking for a minimum MW output level that is achievable without needing costly support fuel (oil or natural gas) or a steam turbine bypass system, without compromising on the safety and reliability of the plant equipment, and with low emissions. Low load operation may not be ideal in terms of efficiency and performance.

The following key areas should be addressed by power plants:

VM comprises hydrocarbons and other gases such as carbon dioxide and nitrogen found in coal. In other words, VM is an index of the gaseous material present in the coal. The typical range of volatile matter for Indian coal is 16-30 per cent.

VM influences flame stability, secondary air requirement, reactivity, secondary oil support, and the minimum ignition temperature of the coal; supports easier ignition of coal particles; and decides the fineness of the unburned carbon in fly ash. Coal with VM less than 16 per cent may be difficult to burn, and is considered to have low volatility.

FC is the combustible matter left behind in the furnace after the VM is distilled away. It consists mostly of carbon, which burns slower than VM. FC gives a rough estimate of the heating value of the coal and dictates coal fineness and mill outlet temperatures. 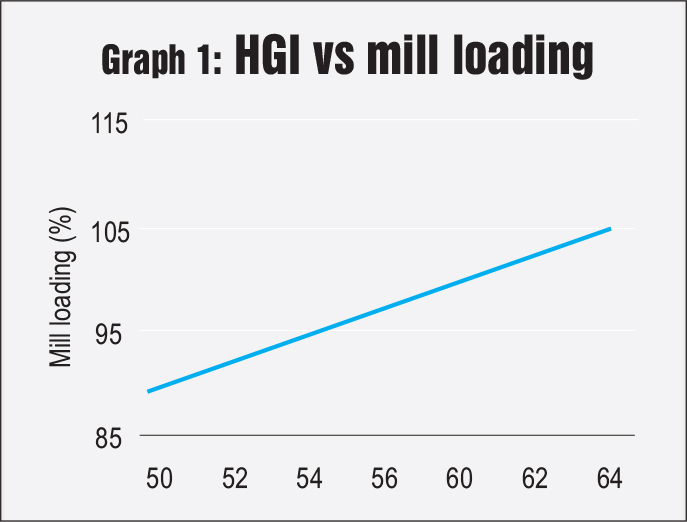 HGI measures the grindability of coal. Being an index, it has no unit, simply a number. The harder the coal, the lower the index number. Conversely, the higher the HGI, the softer and more grindable the coal and the higher the mill loading, as shown in Graph 1.

The fusibility of coal ash is analysed by heating a pyramid-shaped ash sample, 19 mm in height and 6 mm in base width, in a gas/oil/electric furnace in a controlled atmosphere (reducing or oxidising). Various temperatures are thus obtained, as shown in Fig. 1. ST is one of the key parameters for boiler operation, deciding the slagging and fouling characteristics of the boiler. 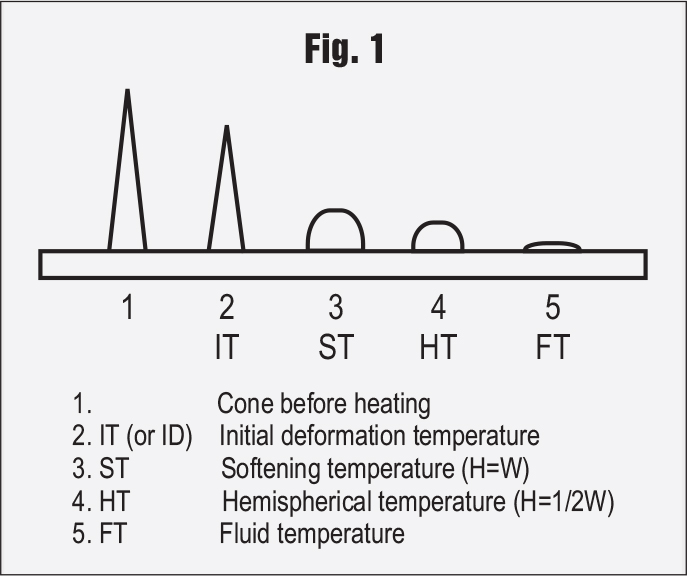 The FC/VM ratio is a key parameter that plays an important role in deciding boiler stability, including enabling low load operation with fewer problems. Coal quality can be determined from proximate analysis. If the FC/VM ratio ranges between 1.0 and 1.3, the coal is sub-bituminous, supporting low-load operation (VM >22 per cent). If the ratio ranges between 1.4 and 1.5, the coal will have difficulty in supporting low load operation (VM < 20 per cent).

The FC/VM ratio also influences flame stability and emission of nitrogen oxides (NOx). Mill outlet temperature influences everything from low load to full load operation with proper fineness, as shown in Graph 2. The primary airflow/coal flow ratio is another critical parameter for slagging and low load to full load operation, as displayed in Graph 3. 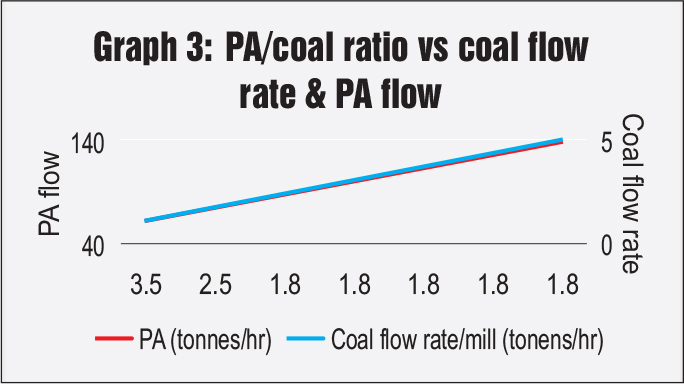 To operate at 45 per cent load, three mills should be in service and 500 MW units are recommended. Coal quality and heating value affect mill loading. Mill outlet temperature should be increased slightly for better combustion and flame intensity and stability, as shown in Graph 2. 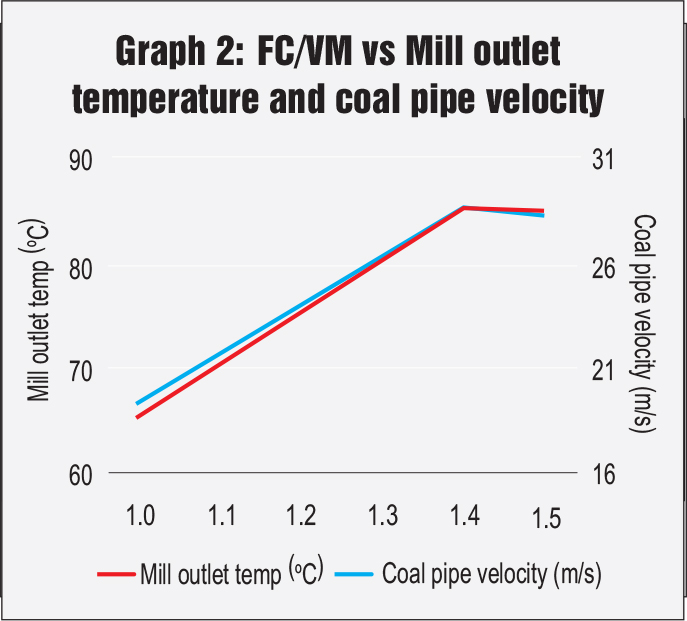 For 45 per cent TMCR load operation, the following parameters are recommended:

A steam turbine/generator service provider can modify several areas on the steam turbine side, such as combining the diaphragm with rotating brush seals; installing new blades and tip seals, new rotors, and a row of new blades with conversion to full arc; or all of the above, with a new inner casing and several additional rows of blading. Original equipment manufacturers ( OEMs) should relax operational restrictions such as pre-warming criteria. On the boiler side, an OEM can identify dozens of potential improvements including economiser upgrades, furnace wall corrosion reduction upgrades, and super-heater material upgrades to improve fuel ash corrosion resistance, restore full load capability and improve availability. An OEM can also recommend strategies for coal switching and low load operation.

The objective of coal blending is to incur economic benefits. Blending or separately firing two different varieties of coal results in a change in the aggregate quality of coal to be fired. The main characteristics of coal that affect boiler performance are the FC/VM ratio, the gross calorific value (GCV), HGI and ash content. Indian power boilers are designed for high ash coal, and the GCV of the coal used therein is typically around 3,000-3,600 kCal per kg.

Blending or separately firing Indian coal with imported coal or coal from different Indian mines or seams requires them to have similar FC/VM ratios, HGI and ash characteristics, including ash softening and ash fusion temperatures. A GCV variation of about 500 kCal per kg is acceptable. 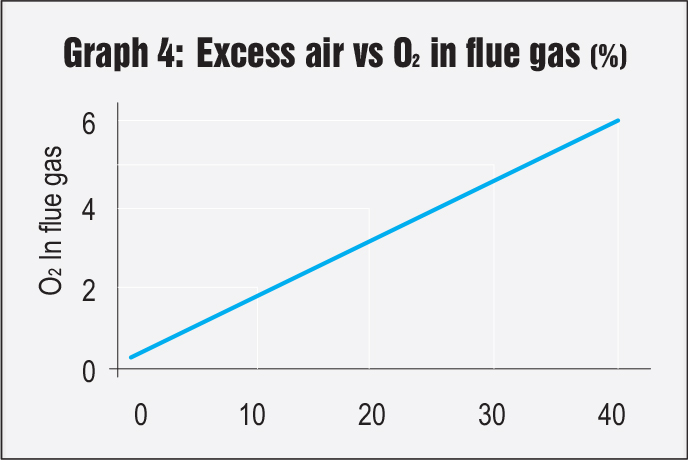 Stabilising and optimising a power plant during low load operation is necessary for maintaining the economic viability of the plant, otherwise, the variable cost will increase, which is uneconomical for power generation. The costs of load cycling and cold, warm and hot start-ups are indicated in Figure 3. Operating at low load is more beneficial than ending up in cold start-up to minimise equipment damage. 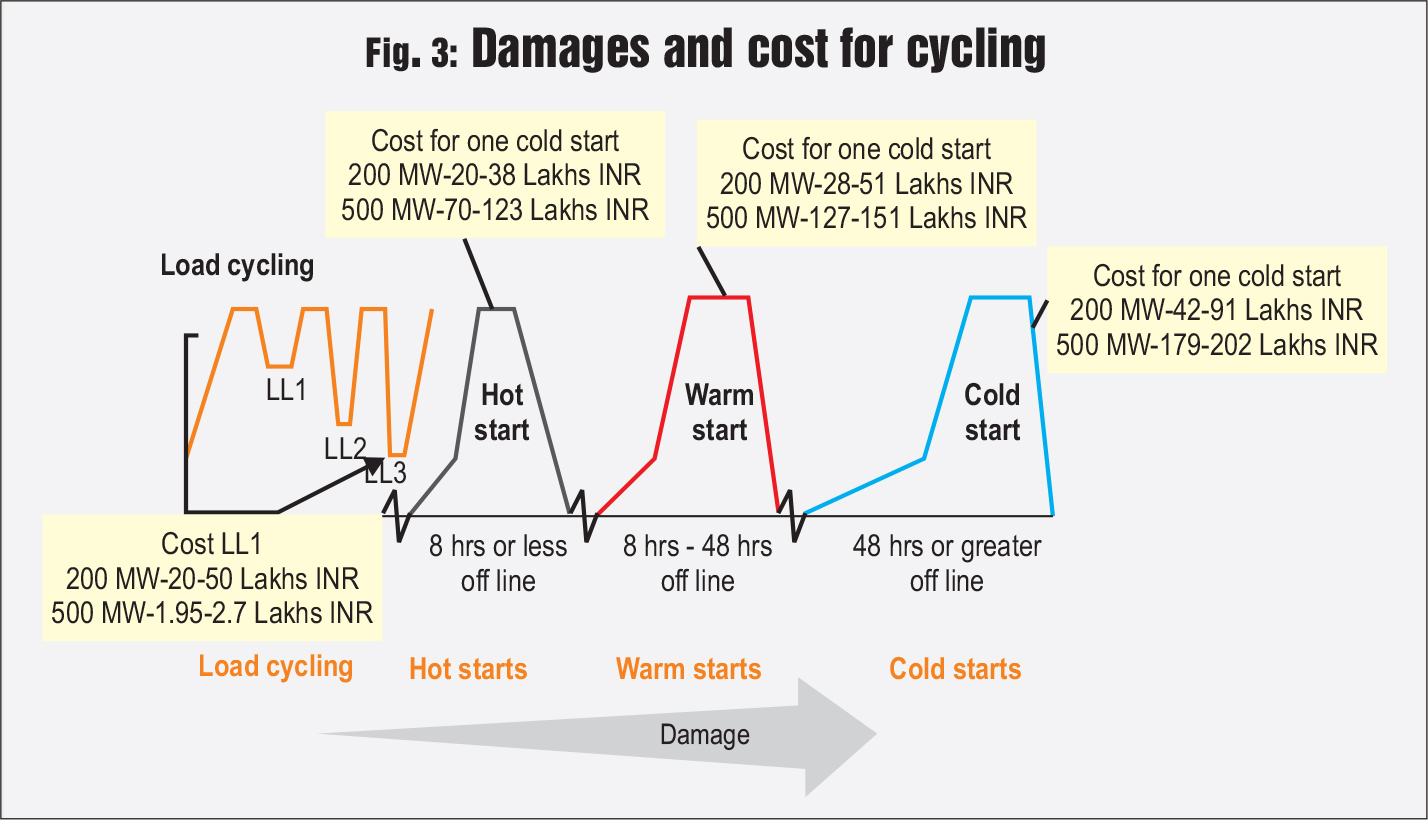 The Electric Power Research Institute is continuously investigating large-scale coal-fired units to achieve low load operation. The process control strategies should improve the stability and efficiency of plants during low load operation. The overfire air ratio should be brought to a minimum for bumpless variations and to avoid instability during cycling to low load. Theoretically, coal-fired units should be operational without oil support above 35 per cent load.

Tuning of parameters such as PA/coal ratio, coal pipe velocity, mill outlet temperature, coal fineness, SA/PA ratio, and coal oxygen/nitrogen ratio, and operational changes based on accurate data are essential for cycling to low-load operation. In conclusion, coal with an FC/VM ratio less than 1.3, VM greater than 22 per cent, and GCV greater than 3,000 kCal per kg is required for low load operation at 45 per cent load condition.

Since a unit is going to be operational at low load with high excess air, there is no need to be concerned about accumulation of unburned carbon and boiler explosion. Emissions such as sulphur dioxide and NOx are not an issue during low load operation.