Over the past few years, the power grid has shifted from manned substations to a remotely monitored and controlled system, from electromechanical to smart meters, and from one-way communication to two-way communication. Supervisory control and data acquisition (SCADA) is a complex computer-based system that uses modern applications to analyse the electric power grid system to acquire data, and monitor and control facilities and processes for decision-making. It is an effective tool for utilising the power grid during contingencies and avoiding voltage collapse, cascade tripping, load generation mismatch and blackouts in the grid.

SCADA is a system of hardware and software elements that allows industrial organisations, including in the power sector, to control industrial processes locally or at remote locations, as well as to monitor, gather and process real-time data. SCADA applications can support despatchers, operators, engineers, managers, etc. with tools to predict, control, visualise, optimise and automate the transmission grid.

The primary function of SCADA is data acquisition from stations, followed up by visualisation of the acquired data for the grid operator. Finally, the arithmetic logic unit functionality in SCADA is used for decision-making. It is applied in the automatic demand management system (ADMS), condition-based load shedding, undervoltage monitoring scheme, or any other critical monitoring applications.

At the substation level, SCADA ensures transmission corridor contingency and evacuation of 100 per cent of generation until upgradation of the existing infrastructure. Apart from this, SCADA is useful for operationalising special protection schemes, under frequency relay and dF/dT monitoring, restricted governor mode operation/free governor mode operation for generation of primary response, ADMS for emergency load relief, and automatic generation control (AGC).

Karnataka Power Transmission Corporation Limited’s (KPTCL) SCADA system has an AGC module. AGC is used to help continuously balance the system, maintain a constant frequency and eliminate area control error. In the future, SCADA is expected to have AGC for renewable generators, which are required to vary generation in response to a change of frequency in the grid. In Karnataka, under the Unified Real Time Dynamic State Measurement System project, phasor management units (PMUs) have been commissioned in four stations. In Phase II of the project, all 220 kV and above stations will be covered. 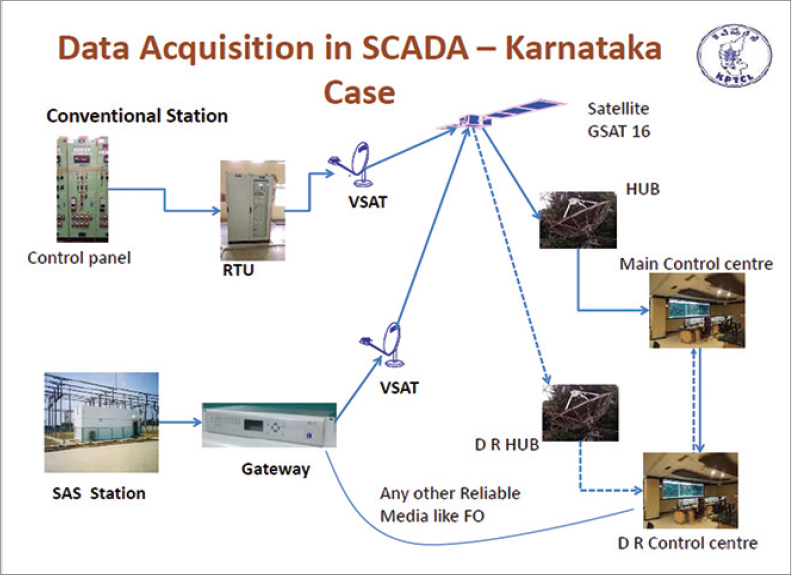 Future of SCADA in transmission

In the power transmission system, the future of SCADA is expected to involve a wide area monitoring and protection system (WAMPS). Under WAMPS, there is a PMU, in which phasor data concentrators collect data via the user datagram protocol at a rate of 25 data samples per second. Using this data, a good analytical tool can achieve wide area protection.

Another emerging technology for the power transmission segment is the flexible AC system (FACTS) STATCOM. FACTS refers to a system consisting of power electronic devices along with power system devices that enhance the controllability and stability of the transmission system as well as increase its power transfer capabilities. SCADA is also expected to bring enhancements in data visualisation, such as 3D graphs of telemetered data, contours, disturbance views in the grid, drag-and-drop features for easier access and presentation of data, and a complete grid view for real-time power flow. Apart from this, utilities are expected to adopt high performing capability tools to store and retrieve the enormous data acquired from SCADA through remote terminal units/substation automation systems/PMUs, along with advanced graphic display facilities such as 3D graphics and multi-axis 2D for analysis, planning, design and growth of the power system.

To establish a robust and stable transmission network, new tools are required for grid management. There is also a need for joint wide area monitoring and protection for central and state transmission utilities. SCADA could be further developed to ensure safe evacuation of 100 per cent of the power generated. With the influx of more and more alternative sources of generation, SCADA can play a crucial role in integrating the different sources of generation into a single grid. Some other required enhancements in the SCADA system are cybersecurity, and network and control centre infrastructure. The typical cyberthreats to a SCADA system are espionage (industrial and state spies as well as terrorists), hacking (script kiddies and hacktivists), criminal elements (such as discontented employees, blackmailers), and business competitors. Hence, SCADA systems need to be equipped with advanced security measures.

SCADA enhances power delivery by providing situational awareness and control of the grid. It helps deliver operational and non-operational data through a variety of communication methods and links. As such, it is an integral part of the smart grid, which represents the future of power transmission systems. n