In July 2021, the ninth annual integrated rating for state power distribution utilities was released by the Ministry of Power (MoP) and the Power Finance Corporation in collaboration with ICRA and CARE. An annual assessment of discom performance against various technical and financial parameters has been carried out based on an MoP-formulated integrated rating methodology since 2012.

The annual exercise serves several purposes. First, it helps benchmark the performance of the discoms, and incentivises them to improve their operational and financial performance. Second, it serves as an indicator of creditworthiness, and facilitates a realistic assessment by banks and financial institutions (FIs) of the risks associated with lending exposures to various discoms. Finally, and most importantly, it serves as a basis for central government assistance. This has become more relevant in the context of the recently approved reforms-based and results-linked revamped distribution sector scheme, which stipulates an annual appraisal of discom performance to be undertaken against predefined performance trajectories as a precondition for central funding.

Under the latest rating exercise, as many as 22 of the 41 state-owned discoms (excluding power departments and private discoms) assessed witnessed a slide in their ratings from the seventh edition (released in October 2019), while only three discoms saw an improvement. The remaining 16 discoms retained their previous ratings. Despite several reforms undertaken by the central government through various schemes, electricity distribution, dominated by state-owned utilities, continues to be the weakest link in the sector value chain. That said, there have been some stellar performances. The top rating of A+ has been given to five discoms – the four Gujarat discoms and Dakshin Haryana Bijli Vitran Nigam Limited (DHBVNL). At the other end of the spectrum, with a C rating, are eight discoms from the states of Andhra Pradesh, Rajasthan, Meghalaya, Jharkhand, Manipur, Tripura and Tamil Nadu.

Going forward, the plan is to publish separate annual consumer service-based ratings for discoms along with new editions of the integrated ratings. The former will assess the customer-centricity of a utility on parameters such as duration and quality of electricity supply, billing and collection efficiency, and grievance redressal. Significantly, some of these parameters have been removed from the integrated rating methodology in the current edition, to be included in the comprehensive set of consumer service ratings. For the new ratings, REC Limited will be the nodal agency. Together, the two ratings will help in the overall reform of the distribution segment. 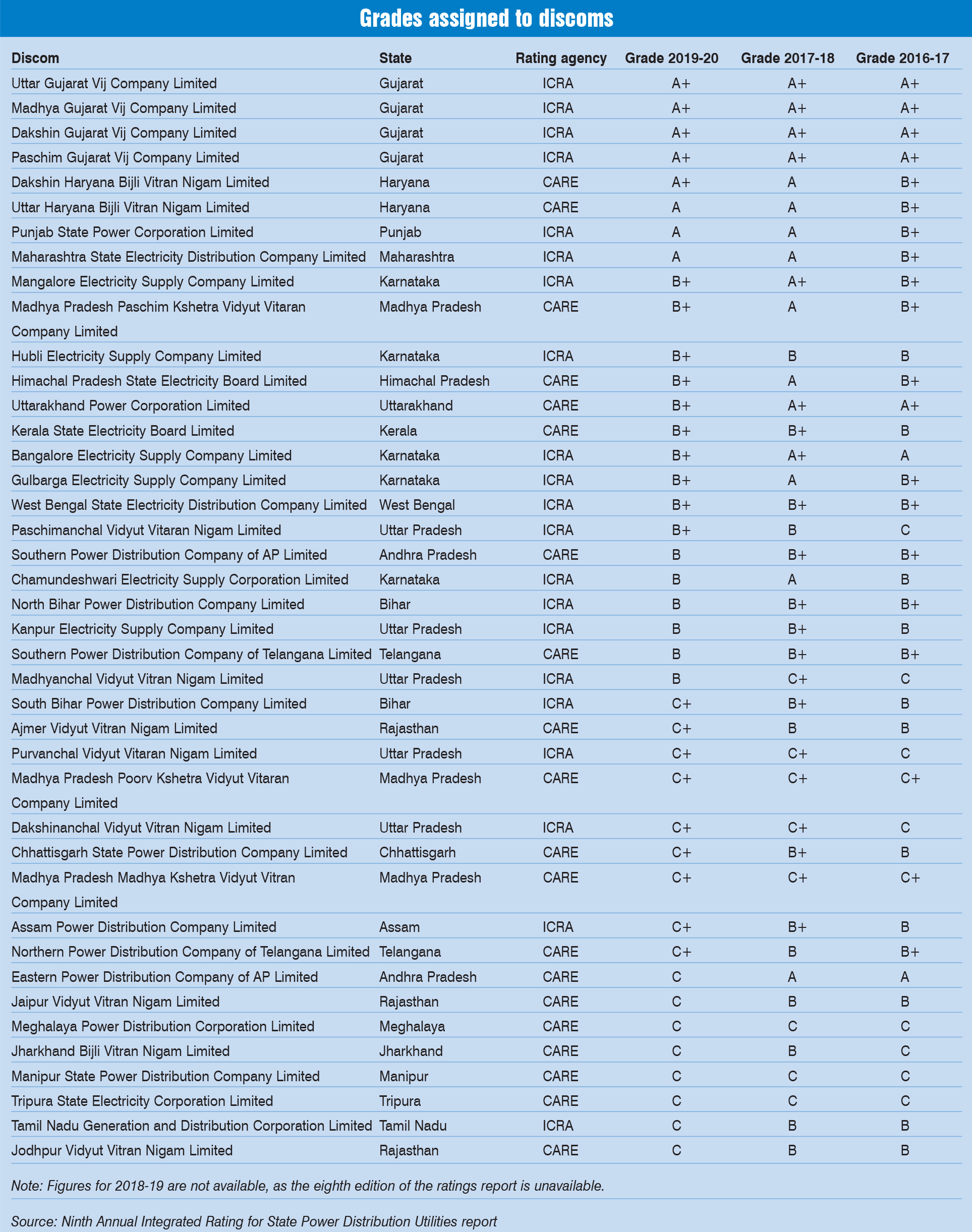 Net, net, the latest ratings of the state power distribution utilities are a mixed bag of varied performances. The central government is making renewed efforts to revamp the distribution segment, which holds the key to the viability of the electricity sector. Given that central funding assistance will be performance linked, the annual discom ratings have gained significance. Discoms will have to make tangible improvements to enhance their ratings and business.