As countries step up their decarbonisation efforts to mitigate climate change, green hydrogen has emerged as a key alternative to controlling emissions while meeting the growing demand for energy. While hydrogen has been in use for many decades in industries such as petroleum refining, manufacture of steel and ammonia-based fertilisers as well as in aerospace applications, it has been primarily “grey” or “blue” in nature, being produced from fossil fuels, coal or natural gas. Controlling emissions from these hard-to-abate sectors is extremely challenging and is an impediment for countries aiming to reach net zero targets. This is where green hydrogen, which is produced from renewable energy, comes into the picture.

Why is renewable energy now being talked about to produce hydrogen? This is mainly because the cost of power generation from renewable energy sources, especially solar, has reached record low levels and is now at par with (or even lower than) conventional generation. In India, which is one of the fastest growing solar energy markets in the world, solar tariffs have declined by 40 per cent from Rs 3.30 per kWh in 2016-17 to Rs 1.99 per kWh in 2020-21, and the installed capacity has more than trebled from 12 GW to 40 GW. Having said that, green hydrogen is still not economical due to the high cost of electrolysers, which are used to produce hydrogen by splitting water molecules. At present, the cost of green hydrogen is two to three times that of grey hydrogen.

However, the benefits of green hydrogen are immense, in terms of integrating renewable energy, replacing coal and coke in the iron and steel industry, and decarbonising the transport sector. For the power sector, which is witnessing an increasing influx of renewables, green hydrogen provides an effective means of ensuring grid stability, as the surplus renewable energy can be used to generate hydrogen.

Taking cognisance of these benefits, the government has stepped up policy action on green hydrogen in recent months. In his Independence Day speech on August 15, 2021, Prime Minister Narendra Modi announced the launch of the National Hydrogen Energy Mission (NHEM). He remarked, “Of every effort being made by India today, the thing that is going to help India with a quantum leap in terms of climate is the field of green hydrogen.” Earlier, in November 2020 too, the prime minister had indicated plans to launch the mission at the 3rd RE-INVEST Conference. The finance minister’s budget speech in February 2021 also made mention of the plan to introduce the mission within the current fiscal.

The Ministry of New and Renewable Energy (MNRE) has already circulated the draft NHEM document for inter ministerial consultations. The industry too has responded well by initiating pilot projects, increasing research and development (R&D) and forging collaborations with global counterparts in the field of green hydrogen. Notably, the country’s largest power generator, NTPC Limited is pioneering several initiatives on this front. At the BRICS Green Hydrogen Summit hosted by NTPC in June 2021, Gurdeep Singh, chairman and managing director, stated, “The transition to a hydrogen economy will not only reduce India’s import dependency on hydrocarbon fuels but also provide clean air to its citizens, reduce GHG emissions in absolute terms and fulfil India’s Atmanirbhar Bharat vision.” 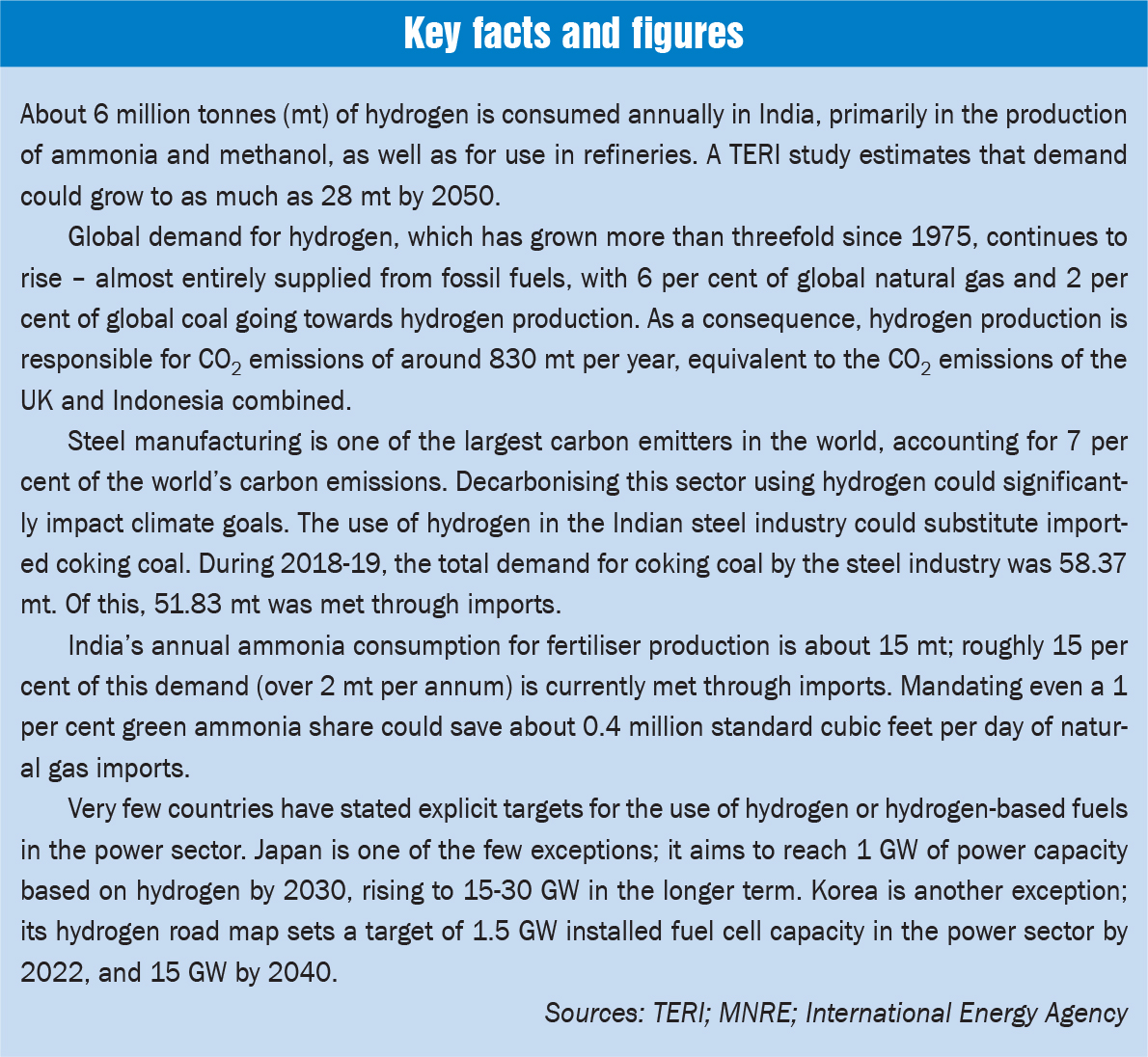 The NHEM is still at the draft stage and will be finalised after discussions with the departments and ministries concerned. The objective of the mission is to scale up green hydrogen production and utilisation, and to align India’s efforts with global best practices in technology, policy and regulation. The focus areas of the mission include demand creation, pilot projects, infrastructure, R&D, standards and regulatory framework, and indigenous manufacturing.

The MNRE has also circulated a draft cabinet note for mandating a green hydrogen consumption obligation for the fertiliser and petroleum refining industries for the period 2023-24 to 2029-30. Given that green hydrogen is a nascent technology, it will be crucial to unlock latent demand in these industries. The government is therefore planning to pick the low-hanging fruit first and target industries that already have considerable applications of hydrogen.

There are also reports of extending the performance-linked incentive scheme for the manufacture of electrolysers. This would help bring down the cost of electrolysers, thereby making green hydrogen competitive with fossil fuels over the next decade or so. Currently, the cost of alkaline electrolysers, which are most commonly used for hydrogen production, is estimated at about Rs 630 million per MW, as per The Energy and Resources Institute’s (TERI) report, The Potential Role of Hydrogen in India (December 2020). The report projects that costs may drop to Rs 230 million per MW by 2030, with large-scale deployment in India and globally, strengthening of the policy framework and falling renewable energy costs (which will power the electrolysers).

Steps have also been taken to promote hydrogen as an automotive fuel. In September 2020, the Ministry of Road Transport and Highways specified the safety and type approval requirements for hydrogen fuel cell vehicles in the Automotive Industry Standard (AIS) 157. In the same month, an 18 per cent blend of hydrogen with CNG (HCNG) was notified as an automotive fuel. There is also a likelihood of the inclusion of hydrogen fuel cell electric vehicles and hydrogen refuelling infrastructure under the centre’s flagship e-mobility scheme, FAME India Phase II (Faster Adoption and Manufacturing of Electric Vehicles in India Phase II). In May 2021, the Delhi High Court had issued a directive to the Department of Heavy Industry to consider hydrogen-based mobility under the scheme.

The industry too has come forward to join the hydrogen revolution, with central public undertakings (CPSUs) and private players working on the ground to create enabling infrastructure.

NTPC is set to play a pivotal role in India’s move towards a hydrogen economy. In June 2021, the company invited global expressions of interest (EoIs) to set up two pilot projects, a stand-alone fuel cell-based backup power system and a stand-alone fuel cell-based microgrid system with hydrogen production using electrolysers on the premises. At present, diesel gensets are used to meet backup power requirements and for microgrid applications. The success of these pilots will enable a shift to greener options. NTPC will enter into further collaborations for the implementation and commercialisation of the projects.

Again, in August 2021, NTPC floated a global EoI for setting up a pilot project for hydrogen blending with natural gas for city gas distribution (CGD) in India. This project, which attempts to decarbonise the gas grid, will be the first of its kind in the country. The company is also exploring the production of green ammonia to decarbonise the fertiliser industry.

Another CPSU, Indian Oil Corporation Limited (IOCL) recently announced its plans to set up the country’s first green hydrogen plant in Mathura. The oil major plans to use power from its wind energy project in Rajasthan for the Mathura refinery to produce green hydrogen through electrolysis. This green hydrogen will help mitigate carbon emissions from the fossil fuel currently used in the refinery to process crude oil to make petrol and diesel. IOCL will not have a captive power plant and will source renewable energy from the grid in order to decarbonise a part of its manufacturing operations.

IOCL has also set up an R&D centre for research in the areas of hydrogen production, storage and applications. It also conducted a pilot project in Delhi, wherein hydrogen was mixed with CNG to be used as fuel for buses, which resulted in lower emissions and better efficiency. Further, it has signed an agreement with Norwegian company Greenstat to set up a Centre of Excellence on Hydrogen in India.

Meanwhile, JSW Future Energy Limited, a wholly owned subsidiary of JSW Energy, has signed an agreement with Australian company Fortescue Future Industries to collaborate on potential projects relating to the production of green hydrogen and utilising it for green steel making, hydrogen mobility, green ammonia, and other applications.

Also, power equipment manufacturer BGR Energy Systems has partnered with Ireland-based Fusion Fuel Green Plc to develop green hydrogen projects in India. The latter will install a demonstrator facility to produce green hydrogen from solar energy in Cuddalore, Tamil Nadu, in the second half of 2021. Subsequently, large-scale projects will be undertaken jointly for the supply of hydrogen for the production of green ammonia and bio-ethanol, and as feedstock for other heavy industrial applications. 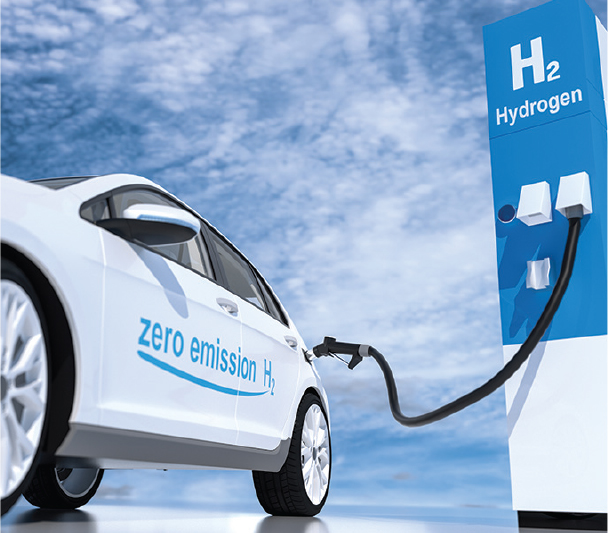 Another challenge is the development of large-scale infrastructure for generation, storage, transportation and handling of hydrogen, which would entail significant investments. Given that hydrogen is explosive in nature, proper and safe storage and handling facilities are crucial to expand usage. In the short term, the government is expected to focus on industries that are already using hydrogen and have these facilities built in.

Anish De, partner, global sector head, power and utilities, KPMG, and national head, energy natural resources and chemicals, KPMG in India, explains, “There is much excitement around hydrogen (including at my end), especially on the green variety generated from renewable energy. The promise is huge since hydrogen is super versatile and serves as fuel, feedstock and storage. Green hydrogen can greatly help in climate change abatement, wherein it replaces fossil fuels. However, while the possibilities are plenty, the euphoria needs to be carefully tempered. On a delivered basis, green hydrogen costs can be two to three times higher today as compared to conventional hydrogen produced from natural gas. Therefore, cost reductions on renewable energy generation, hydrogen production and transmission need to play out. Additionally, there are some concerns around resources (including freshwater and electrolyser inputs). Most importantly, the transition to hydrogen will involve complex ecosystem changes, especially in hard-to-abate sectors such as metals, cement and transport. Apart from costs, which require time, the key will be to catch the ongoing capex cycle in these industries and, if required, incentivise hydrogen consumption and not production or supply alone. There is little value in producing at a competitive price if the user is not ready or has committed to alternative paths.”

Net, net, although green hydrogen can be a game changer in decarbonising economies, there is still some time for it to reach commercial viability. However, a strong policy push and a focused approach in addressing the challenges can go a long way in unlocking the true potential of green hydrogen.