The central government is implementing various schemes and programmes to help power discoms improve their financial and operational health. With the aim of improving the operational efficiency and financial sustainability of discoms, the Ministry of Power (MoP) recently notified the

reforms-based and results-linked Revamped Distribution Sector Scheme (RDSS). The five-year scheme (effective till 2025-26), with an outlay of Rs 3 trillion, will be implemented based on the action plan worked out for each state rather than a “one-size-fits-all” plan.

Broadly, the scheme aims at the installation of 250 million smart meters, and separation of 10,000 agricultural feeders. Notably, the RDSS subsumes all the existing projects approved under schemes such as the Integrated Power Development Scheme (IPDS), the Deendayal Upadhyaya Gram Jyoti Yojana (DDUGJY), and the Prime Minister’s Development Package (PMDP)-2015.

Power Line presents an update on the performance, progress and targets of the various distribution segment programmes…

Notified on July 20, 2021, the RDSS seeks to improve the operational efficiency and financial sustainability of the state discoms and power departments, which are reeling from heavy losses, by providing conditional financial assistance for strengthening the supply infrastructure through four key objectives:

Scope of the scheme

The scheme has two key parts. Part A comprises metering and distribution infrastructure works, and Part B includes training and capacity building as well as other enabling and supporting activities.

Part A of the scheme broadly includes metering, feeder segregation, modernisation of the distribution system in urban areas and system strengthening in both urban and rural areas. Under metering, the scheme envisages the installation of around 250 million prepaid smart meters for all consumers except agricultural consumers. Priority will be given to all 500 Atal Mission for Rejuvenation and Urban Transformation cities (with a population of over 100,000 with notified municipalities); union territories (UTs); industrial and commercial consumers including micro, small and medium enterprises; government offices (at the block level and above); and high-loss areas. On the feeder segregation front, the scheme envisages separation works for 10,000 agricultural feeders with an investment of Rs 200 billion. The scheme converges with the Pradhan Mantri Kisan Urja Suraksha evam Utthaan Mahabhiyan (PM-KUSUM), which aims to solarise all feeders, and create avenues for additional income for farmers. Apart from this, the RDSS proposes the implementation of supervisory control and data acquisition (SCADA) in all urban areas and distribution management systems (DMSs) in 100 urban centres. 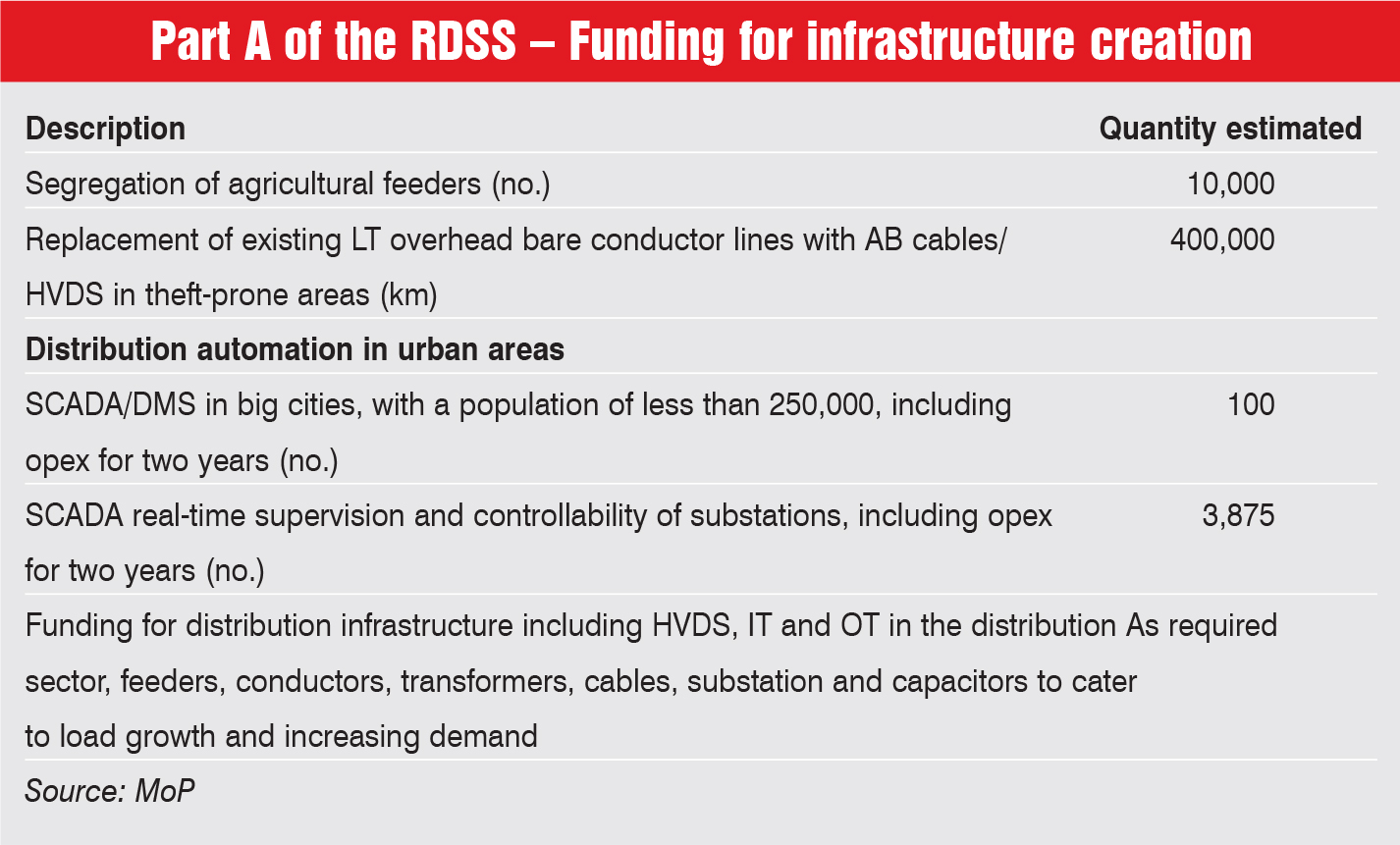 Financing of the scheme

The estimated outlay of the scheme is Rs 3,037.58 billion with an estimated gross budgetary support (GBS) from the central government of Rs 976.31 billion. The government will provide Rs 10.3 billion for activities under Part B of the scheme. It is envisaged that about Rs 2 billion will be spent by the state governments towards reform support in the form of consultancy. The performance of the discoms will also form an integral part of the financing norms for any project in the distribution sector under this scheme, even those not related to funding. The duration of the scheme is from 2021-22 to 2025-26.

The central assistance will be based on meeting the pre-qualifying criteria and achieving basic minimum benchmarks by discoms (excluding private power distribution companies), which will be evaluated on the basis of an agreed evaluation framework tied to financial improvements. An interministerial monitoring committee will be formed under the chairmanship of the secretary, MoP, for implementation of the scheme, including approval of operational guidelines, sanction of discoms’ action plans and detailed project reports, as well as review and monitoring of the scheme’s progress. REC Limited and the PFC have been designated as the nodal agencies for facilitating its implementation.

Schemes subsumed under the RDSS

All ongoing projects approved under schemes such as IPDS, DDUGJY and PMDP-2015 (for the UTs of Jammu & Kashmir and Ladakh) will be subsumed under the RDSS. The savings in GBS amounting to about Rs 170 billion will be part of the total outlay for the new scheme.

IPDS: The IPDS, notified on December 3, 2014, largely envisaged the strengthening of sub-transmission and distribution networks, metering of distribution transformers/feeders/consumers in urban areas, IT enablement of the distribution sector (under the R-APDRP) and underground cabling to include the additional demand of states. The total outlay of the scheme (including R-APDRP) is estimated to be Rs 766 billion (budgetary support of Rs 481 billion). During 2020-21, Rs 633 billion capital outlay was approved under the scheme, of which Rs 291 billion has been released by the Government of India. In terms of physical progress, over 33,000 ckt. km of overhead lines have been installed as of November 2020 and around 75,000 ckt. km of underground/aerial bunched cables have been laid. Further, 927 new substations have been set up while over 1,500 existing substations have undergone capacity augmentation. As of November 2020, all smaller towns have been IT enabled under the IPDS in Andhra Pradesh (east), Telangana and Uttarakhand for improved consumer services. In addition, for better workflow management in utilities, the IPDS has funded enterprise resource planning across several utilities, of which implementation has been completed in 11 utilities. Further, 98 gas-insulated switchgear (GIS) substations are under progress in various states. Under the older projects subsumed under the IPDS, all 1,290 towns have been IT-enabled and SCADA systems have been deployed in 57 towns. System strengthening works have also been completed in 1,197 towns.

DDUGJY: Launched in December 2014, the DDUGJY primarily focuses on the separation of agricultural and non-agricultural feeders to facilitate the judicious supply of electricity to rural areas; strengthening and augmentation of sub-transmission and distribution infrastructure; and metering at distribution transformers, feeders and consumer sites. The total outlay of the scheme is estimated to be Rs 758 billion, of which Rs 591 billion has been approved by the Government of India. Of this, Rs 530 billion had been released as of March 2021. In terms of physical infrastructure, as of November 2020, significant progress has been made under the scheme in village electrification. Feeder separation, involving 122,049 ckt. km of 11 kV lines, has been completed. Achievements under the system strengthening component include the establishment/augmentation of 3,896 new substations, installation of 575,115 distribution transformers, and installation of 491,338 km low tension and 203,085 km high tension 11 kV and 33 kV lines. Besides, metering of 14.8 million consumers, 208,924 distribution transformers and 13,190 feeders has been completed.

Under the Smart Meter National Programme (SMNP), Energy Efficiency Services Limited (EESL) is spearheading the smart metering drive with an ambitious target of replacing 250 million conventional meters with smart meters. EESL is engaged in the installation of 80 per cent of the 12 million smart meters under implementation across the country. Currently, the installation of over 1.58 million smart meters has been completed. State-wise, the highest number of smart meters have been installed in Uttar Pradesh (1,144,932), followed by Haryana (246,951), Bihar (103,929), Delhi (58,840), Andaman & Nicobar Islands (23,906), and Rajasthan (494).

EESL, along with the National Investment and Infrastructure Fund, has formed a joint venture company called IntelliSmart Infrastructure Private Limited. Set up in 2019, IntelliSmart aims to replicate EESL’s success with the same build-own-operate-transfer model, in order to improve the operational efficiencies of discoms, revenue management, billing efficiency and consumer satisfaction. The entire capex and opex is funded by the developer, with no additional burden on the discom. This is recovered from the discom over the project period as lease rental on a monthly basis. This model adopts the pay-as-you-save approach.

Launched in 2015, the National Smart Grid Mission (NSGM) aims to support the development of smart grid projects in the country.  Currently, four smart grid projects are being implemented under the mission across Chandigarh, Jharkhand and Rajasthan. These projects entail an investment of Rs 4.64 billion. As of July 2021, a total of 41,630 smart meters have been installed under the projects including 10,512 smart meters by the Chandigarh Electricity Department in Subdivision 5, and 31,118 smart meters by Jaipur Vidyut Vitran Nigam Limited. A smart city research and development (R&D) platform has been developed at IIT Kanpur with a   potential to test integration with smart cities and undertake UI ASSIST activities. Further, the Smart Grid Knowledge Centre at Manesar showcases working models of smart grid functionalities and also imparts training capacity building activities.

Going forward, the NSGM will focus on the development of pilot/demonstration projects in areas such as demand response, reliability improvement, microgrids and data analytics. The mission would also focus on hand holding state discoms through state-level project management units for the development of a specific smart grid road map and smart grid readiness self-assessment tool. It is also focusing on cost-benefit analysis.

UDAY: UDAY primarily has two outcome parameters – one is aggregate technical and commercial (AT&C) loss reduction to 15 per cent and the other is reduction in the gap between the ACS and ARR to zero by March 2019. The tenor of the scheme is over and the Government of India has assessed the performance of the participating states under UDAY. The AT&C losses at the all-India level reduced from 23.7 per cent in 2015-16 to 21.83 per cent in the financial year 2019-20. The gap between ACS and ARR has reduced from Re. 0.47 per unit in 2015-16 to Re. 0.28 per unit in 2019-20.

To conclude, while government schemes and programmes have made significant progress in power distribution, there is still much to be done. The newly launched RDSS, taking cognisance of the gaps and challenges observed in the past schemes, focuses on improving the operational efficiency of discoms. However, timely implementation of the scheme by the state government and discoms is crucial. It is paramount that the preconditions of the scheme are met by the states and discoms, and the targets are achieved in a time-bound manner.